Northern Alliance vs Kingdom of Men

I got in a quick game over the weekend, and my opponent was gracious enough to type up a fantastic battle report: 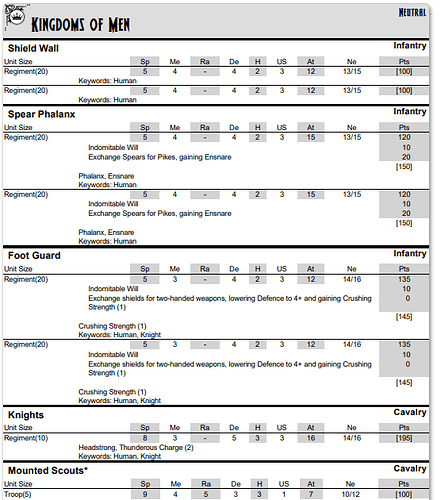 Against all odds and recent historical precedent, I managed to play a game of Kings of War recently. I met my opponent through a Facebook gr...

Got in another game, and my opponent was once again gracious enough to put together a well-written battle report: 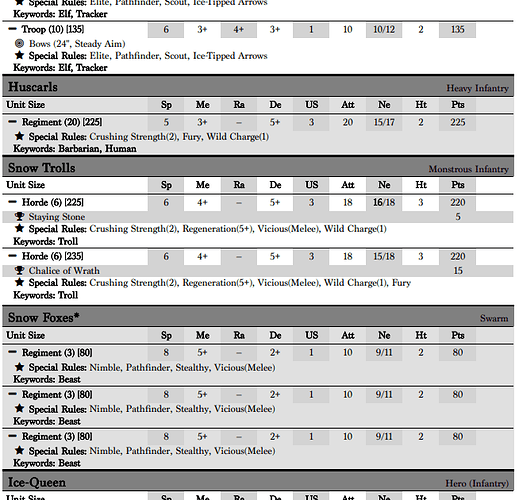 I was able to get in another game of Kings of War! It was against the same splendid foe as the previous game and played on March 20th, 2022....

Knight troops are decent counter chaff, but don’t expect them to do much in a front charge - esp hindered!

Militia for just sitting on objectives is fine - or run hordes for blocking up stuff.

Going quite msu you are reliant on combi charging, flanks or above average dice to put some hurt down.

The Outlaws formation looks pretty solid - lists often have a couple of troop of bowmen anyway, while the character is tasty. Volley fire is really a situational bonus.

I was the Northern Alliance player on this one

Pass on the advice!

Round 3 of the Northern Alliance vs KOM report is up:
https://regnumaeternum.blogspot.com/2022/05/kings-of-war-3rd-edition-003-kom-vs-na.html

My opponent does another great write-up. In this game, I went heavy on the shooting (ice kin hunters, ice elementals, two bolt throwers), which performed remarkably well against his def 3 and 4 wall of humans. We’re trying to work our way through the scenarios and test out a bunch of different units, so expect continued variety going forward!

I will say that on paper, the ice elementals don’t strike me as that great–but in actual play, they were superb. Def 5, -/17 nerve, surgeable units are powerful!