Of rats and men

Played a first game with my 12yr old son: men vs ratkin. He chose to play kingdoms of men over ratkin. It was a lesrning the rules kinda game and since i dont havr minis for all the units… chipboard bases with magnetize unit names worked well enough. He won.

Not much of a battle report. I got the first turn after scout move with my scurrier and master scurrier. I knocked out a troop of bowmen right off the bat. After that, it was all men all day. His mounted general got some good rolls and whipped a regiment of hackpaws and foot guard regiment ended up taking out the scurriers and master scurrier.

On the other side of the board, his spear phalanx hordeand my spear warrior horde went toe to toe. Two turns of that with him ultimately doing 23 damage and routing the warriors. I flanked his phalamx with a horde of shock troops and routed them.

We called the game on account of it being close to 11 last night but all i had left were the shock troops and he hadnt even engaged with his knights. 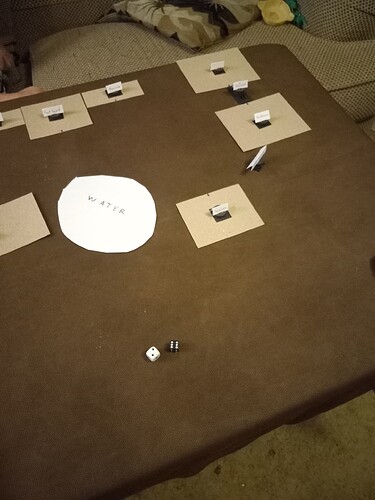 And a proper size battlefield also

Fair play to you for getting your son involved, and hopefully the rest will come in time. I did the same with my kids. My son didn’t like either of the armies in the Warhammer Fantasy starter Kit. He’d already been touched by the dark side, and wanted Vampire Counts, so ironically, I was left with both armies: Dwarfs and Goblins, but my Daughter liked to paint, so she painted the Goblins while i painted the Dwarfs. (and played with both against my Son’s undead.
That must have been close on 15 years ago, and my son still plays.
One of the wonderful things about Kings of War over the others is how balanced it is, so can quite often go down to the wire.