okay so I’m a big trouble in little china fan, and this is thread is going to involve lots of pigs.

Over in the hobby talk section there is a thread called a tale of 4 gamers, where there was/is talk of the old school army building blogs/articles of folks building an army off a budget every month. Fun timing as I’m returning to KoW and starting a new army which I’m building on a 50usd a month budget, and this will be my showcase thread as I build my army.

I’m working on an abyssal dwarf army with a heavy pig theme, because I think they’re under used as a theme. I recently got all my orders for march in which consists of the following,

So a few comments about the miniatures, the boars from privateer press are pretty standard fair from them. PP is a good sized company that has been putting out miniatures for years now, when you order from them you know what you’re getting no real surprises as there are plenty of blogs, articles, and forum posting discussing their miniatures.

I’ve known about Scibor miniatues for years, but never had a reason to order from them. For those of you who don’t know about them they produce resin miniatures. I have to say I like the quality of what I got, like some folks the only experience I have with resin models has been with certain ill fated production lines from other companies. The quality is good enough I’ll be dipping back into this well for a few additional models.

Mantics darksoul/decimators, overall I’m pleased with the models. The models are of quality material, well designed in the sense there is no assembly issues like parts not fitting right, and they have a good look overall. My only major issue is with the details on the models. The details are so fine that it causes painting issues, even when painted they are hard to see, and some of the details (due to the scale of he model) just become muddled.

As for painting, I’m still working out the exact details on how I want the colors to look, but I will be running a rectangular color scheme. Blue, green, orange, and red with a focus on blue and green as my more dominate colors giving me an overall cool color scheme. I’ll post photos (hopefully) tonight once I finish up a test miniature or two.

Love it. My clubmate has some Wrath of Kings Teknes Union Workers he was working in to his own Abyssal Dwarfs: 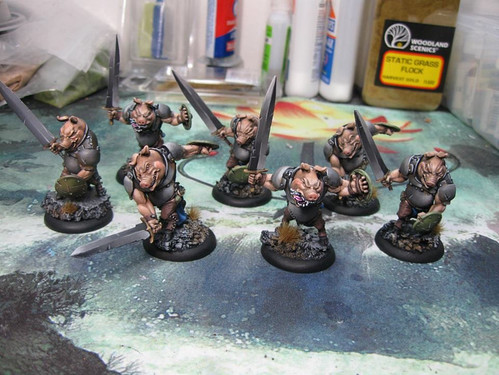 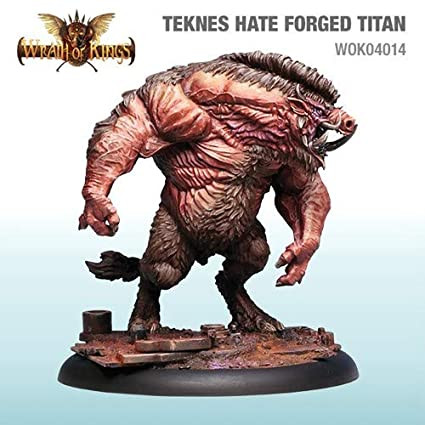 ^ A bit small for a titan but serves well on a 50mm (Despoiler Champ maybe?)

First up is one of my boars which I’ll be using as grosesques, it took me most of the to figure out a pig skin tone I thought was passable. Overall I’m happy with the blue, orange/brown leather and skin tone. I’m not sold on the red orange of the head covering, I’ll be experiementing with a darker fur color to see if it balances out. 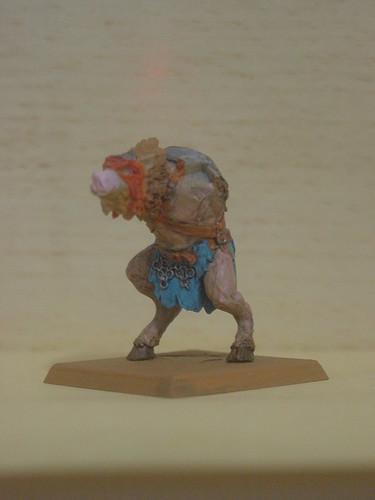 Next is my overlord/iron caster (which ever I need the model to serve as for now) in blue, I’m happy with how the blue offsets from the magenta of the haft of his axe, and his green hide cloak. I’m not happy with the cloak yet, I want a smoother transition in the colors so it has more of an iridescent effect. 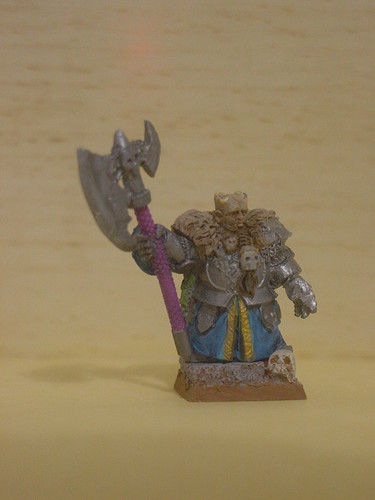 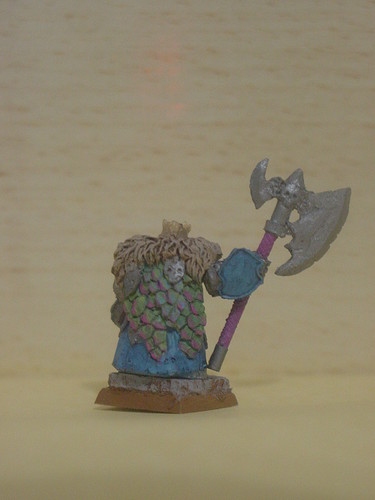 As people might notice I still have some clean up to do on the models as well as the paint jobs. I never realized how spoiled I was with my orcs until I had to paint actual skin tones again. I’m also in need of some green stuff to do some patch work, as the scibor model had more skulls then I wanted… ie any. Seriously when did everyone start taking their fashion cues from Heinrich Kemmler.

So with my April budget I bought a big block green stuff. One of Reaper miniatures new dire boars (in bones) as well as a box of Union bombardiers from the wrath of kings line of miniatures which I’ll be using as gargoyles, due to their overall size I should be able to squeeze two maybe even three units out of the box set.

So I had a couple days off and managed to toss some paint onto my a few of my models. My actual dwarves are being quite a pain to paint. But I did finish up three of my union bombardiers to use as gargoyles, as I thought I’ll only fit 3 of the models on a heavy infantry troop base so I’ll manage a full 3 units of gargoyles out of that purchase.