Sooo… been a long time and I’ve just recently got a box of tactical marines and a Primaris Librarian when I was with my dad last weekend.

Three guesses what this topic will be about even though this isn’t KoW related.

Anywhoos I started out by assembling my Librarian, trying to cut the stuff out of the sprues made me realize that I really needed to shell out money for stuff like plastic cutters and plastic glue (I had to get the latter and some files from hobby lobby because my LGS had none of that, heck when I was there they kept on pushing me and pushing me to buy their super glue for the models even though I kept on telling them I needed PLASTIC GLUE, it was then that one of the employees there said I would probably have to go to hobby lobby to get plastic glue).

Alright off that tangent about getting the proper glue, apparently nobody will tell you this but painting in sub assembly is a bad idea as it will mess up with the glue’s ability to stick. And after several failures of applying superglue to the right leg of my Librarian, there was an eventual buildup of superglue in the area where you glue the leg and the crotch together. So now they’re telling me that I have to scrape off the excess glue with a hobby knife (not as easy as those youtubers make it look) and quite possible get some engine stuff from autozone to completely strip my model of paint… after I wasted both paint and time trying to come up with a good color scheme…

And one more thing to bring up… there is some stupid gap where the chest and the front robe are supposed to meet in the crotch area and there is this gap that is driving me mad (so much for “Quality GW Plastic”) and they completely brushed me off when I brought this concern up… I even asked them to walk me through this and where do they point me? F#$KING YOUTUBE!!!

So aside from all this pent up anger from my failure at model building I ask for one thing.

Regarding Gap filling:
For minor things I use plastic glue or matt varnish

Tabletop Minions talked about this magic stuff Bondic. It is liquid Resin and I use it for everything now

Another tip would be the following but I haven’t used this myself.

I read somewhere that old modeler trick is super glue and baking soda for filling gaps in models.

Alright here’s an update on what’s going on for me, I haven’t worked on the Primaris Librarian in a while, focusing more on my tactical marine squad.

What happened is that when I was assembling my first model I thought “hey, this guy could be his own character”, so I then worked on making him into a firstborn lieutenant, then when I was about to put on the head I realized that the helmeted Librarian head fitted on my lieutenant, so I dropped the whole “make him into a lieutenant” idea and made him into my first kitbased librarian… I’ll send you guys a pic and you can tell me what I need to add in order to make him look more like a librarian. (Note: the reason the head is blue is that it was originally going to go on my Primaris Librarian but put it on my tactical marine turned librarian). 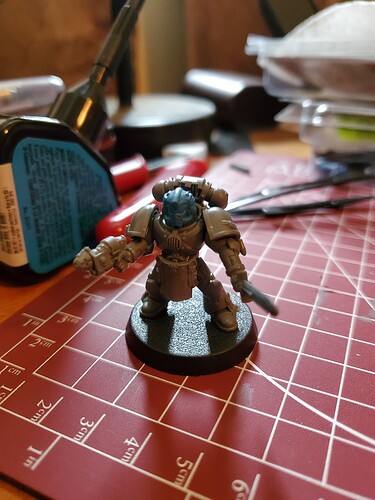 Well, you need scrolls and lots of them. Look up for Blood Angels Astorath the Grim for reference. I think there are some on SM sprue and long ones you can make from paper. I could show you how I made mine tomorrow.

Please do! I know that for the rocket launcher there was an open scroll thing that I could see could fit somewhere on my Librarian, and maybe some purity seals given the whole “Psyker” thing, and there is those two dangly things that you see on the sergeant in the box art. Also would you consider cutting the blade and cross guard of the Force sword off and replace the Power sword blade and cross guard for that in order to make it look like a proper Force Sword a good idea? Or since I’m just starting out save that primaris arm for something else?

I would say no unless you are going to paint it to Golden Daemon standard and want all the details. Otherwise, once you paint it, it would be no difference, no one would notice it on the table and only you would know that you spent 20 minutes cutting and glueing that sword.

Of course, if you enjoy cutting and glueing, go for it!

Thanks for saving me a potential hassle, I’ll find another use for that Primaris arm. Hopefully

So, as promised, here are pics of my scratch built Astorath the Grim and Sanguinor with paper made scrolls: 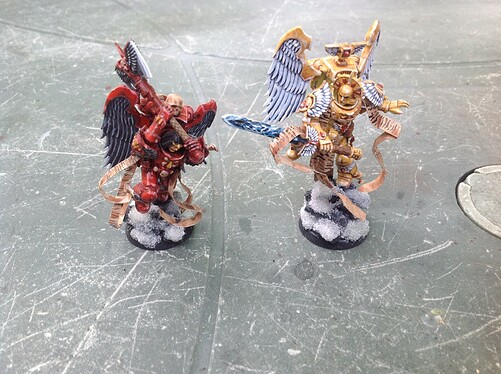 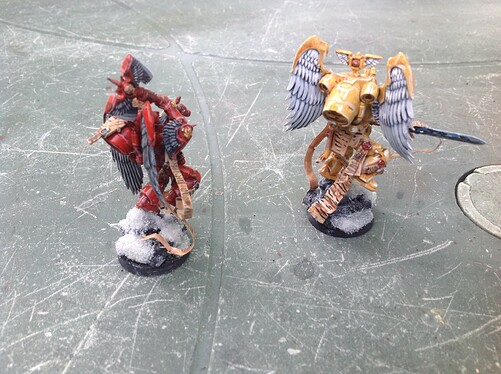 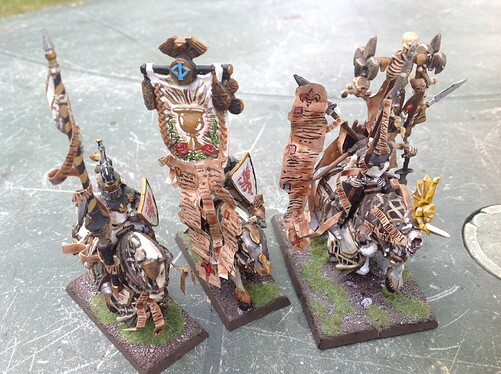 Hmmm… what would be good paper to scratch build. Because I know I want my chapter to have an aquatic dragon theme (might need a lot of green stuff) so what would you recommend?

I used regular paper for printing, I think it is 80g/m or something like that. The most basic paper, really.

Well, the painting alone is usually enough for space marines to encompass a theme, even without any extravagant details. And spot colours on shoulder pads and knee pads and freehand motives on shoulder pads. In my opinion, making details on “rank and file” space marines is not worth it. Although they are superior warriors and what not, they are basically grunts in a game.

I would add special stuff to characters and maybe sergeants and that is it. I have Blood Angels and regular troops are just vanilla marines painted red and yellow for spot colour and that is in my opinion enough. Sergeants got some BA motives and heads and that is it.

Nice video of the plastic slurry, not seen that before, and already have everything required to give it a try. Have some dragon heads that come in two halves and leave a visible join.

Gave the plastic slurry a go in an old plastic cement jar - good results. Tested it on the belly of a gw hydra and it filled the seam well. It can obscure a bit of the detail like very thick paint. It may work better on smooth/flat surfaces where you can file it back down. Will definitely see some use in the right situations.

@Garuses Thanks for the tip!