Problems with Visibility rules in Armada

The visibility rules for shooting at enemy ships are provided at page 23 in the Armada rulebook. I am sorry to say the text there is written in a rather messy way, so it took us a while to find out how one should decide whether the target ship is fully visible or only partially visible. First of all the rules say when the visibility to a target is blocked, no problem on this part. Then, the partial visibility is defined as fulfillment of at least one of these two conditions:

Well, I would find it easier to read if the rules specified when is the visibility blocked and when the target ship is fully visible with the other cases ruled as partially visible but OK …

So, let us have a look how the rules work in two specific cases:

Example 1 (it actually happened in our game): 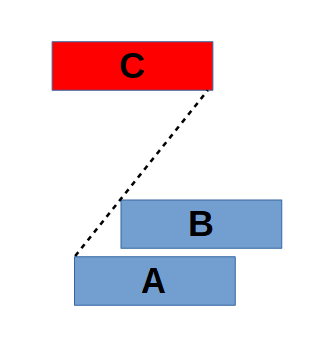 The ship A shoots at ship C from the broadside. In spite of the ship B blocking most of the broadside weapons on ship A, neither of the conditions for partial visibility applies, so the ship C is fully visible. Is it really meant to be so?! 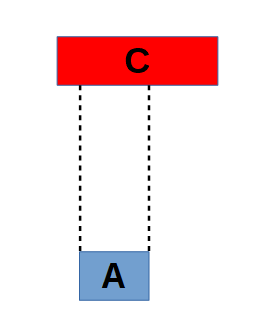 A small ship A (50 mm long) shoots at an XL ship C (125 mm long) from the broadside. As the condition 2) is fulfilled the target ship is partially visible. Really?!

I guess the visibility rules should be rewritten …