I have a confession to make - I never liked Dwarves. Their lore, their aesthetics, their playstyle… all of it was almost antithetical to what I liked in wargaming. Dwarves were just an army that I never, ever thought I’d want to play.

…yet here we are. 3000 points of Dwarfs, almost all of it done in the last 9 months, by a player who can’t stop painting yet more of these stubborn little bastards! 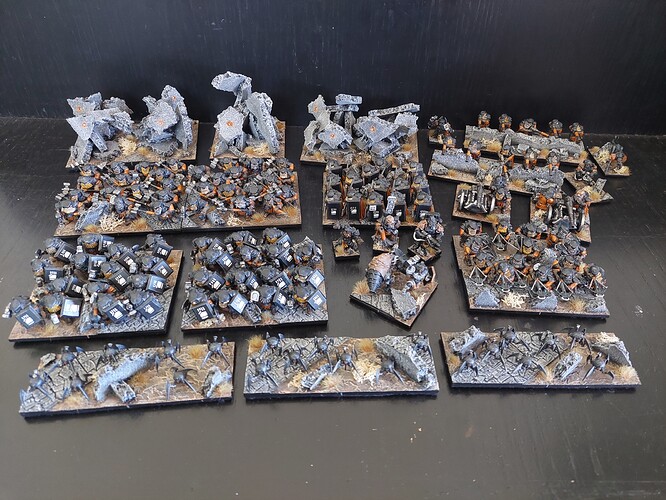 So what happened? I’m not entirely sure, but I think it started with an idea. A dream of an efficient, easily transportable Dwarf Army using the Mantic range. An Army I could take on a plane without fear of it getting damaged on the way. The Mantic Dwarves are perfect for this, with their solid bodies and rounded helmets, so long as I avoided any weapons sticking out the top or sides of the Regiment bases. If i could manage that, I could achieve my dream of the easy to store Dwarf Stack… 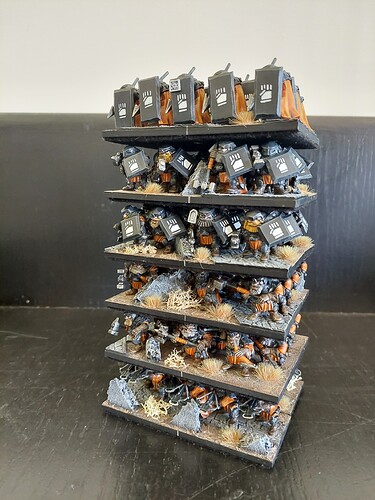 The army had a rough start. It took alot of test schemes to settle on a colour combo I was happy with. In the end I went with orange fabric with black armour (mainly because I really dislike painting metallics). Then I got a bit distracted, and spent most of 2020 painting an entire Trident Realms army. Whoops. 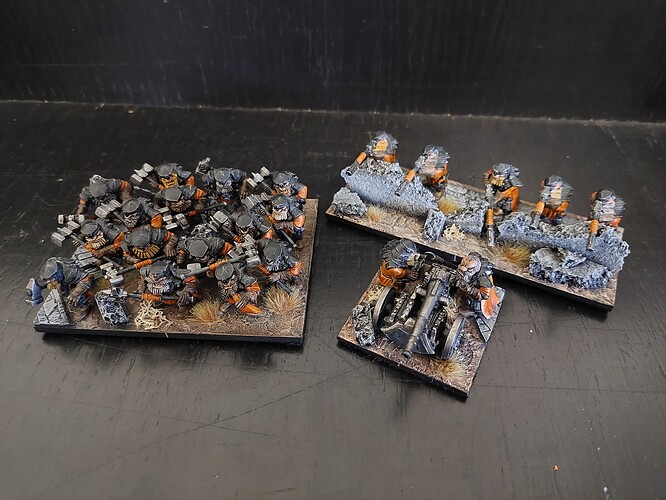 But with no other distractions I was committed to getting this army done. And as it turned out, the army was pretty easy to paint too. So it’s rapidly grown since then!

Over time the armies background started to evolve too. I’ve always been a fan of playing the bad guy. And as I read further into their background, it became clear that the Imperial Dwarfs were not nice at all, being led by their authoritarian, expansionist King Golloch. And so my Dwarfs became the Fists of Golloch - the uncompromising clenched fist of their rightful King! 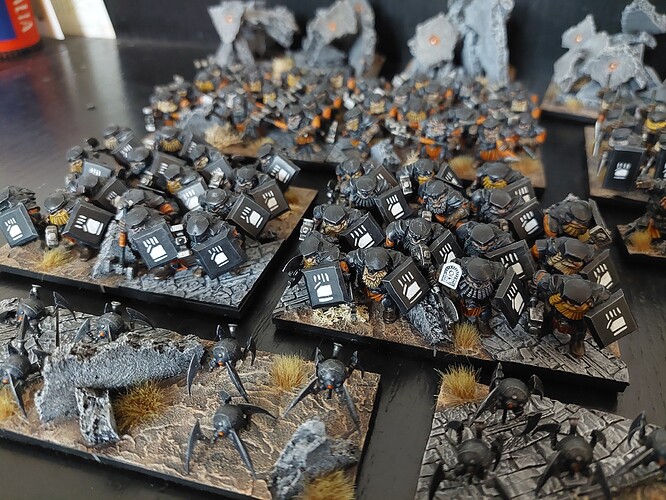 As a fan of personalising one’s army, I couldn’t help but convert my units where I could. One example is the square shields made from plasticard (I really dislike the kite shields). The Bulwarkers in particular are a favourite of mine, with their tower shields and “efficient” spear-armed pose. 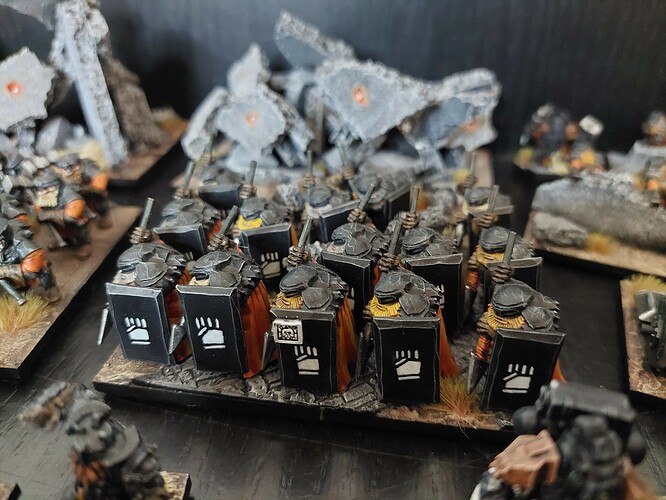 My Earth Elementals are a unit I never intended to add (not so easy to transport), but became a necessity when I decided to take my Dwarfs to a tournament and needed to fill out points. They’re basically made from corkboard and paperclips. Super-cheap, but I’m very happy with how they turned out. 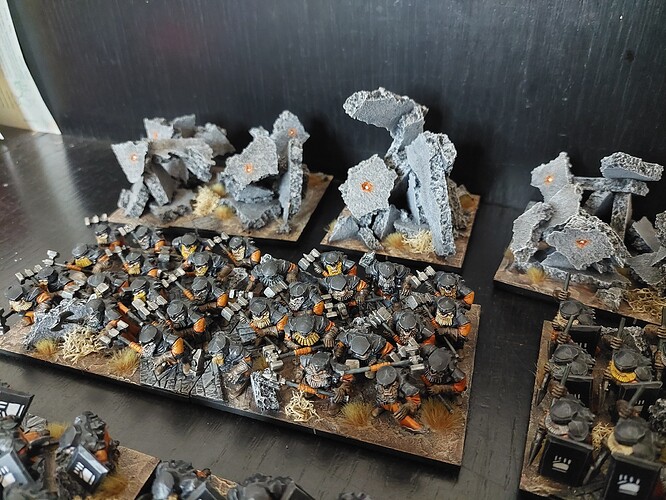 The characters are the only other units I didn’t try to keep compact, since they’re pretty easy to store regardless. It also helps them to stand out, which is a bonus. 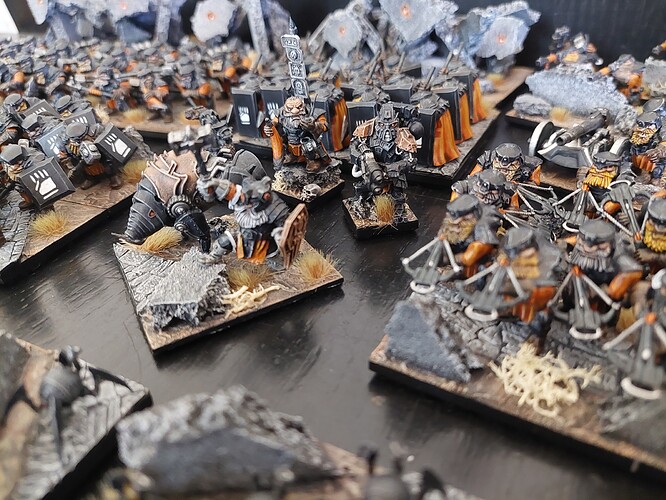 I’ve also incorporated a steampunk/technological theme into the army, by using robots from the Malifaux range (like the steam arachnid mastiffs and mecha-pig, above) and progressively more models from the Forgefathers range. I’m trying to keep it mostly Mantic, so the Forgefathers are great for this. 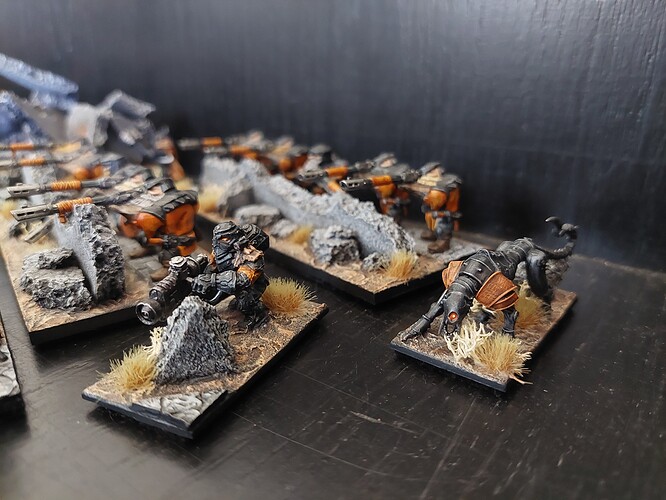 Anyway, that’s it for now. I’ll probably put up more pics later on, but this post is long enough.

A testament to how a few bits of army fluff (do people still use that word?) can really bring a force together.

I also love that you built it with a practical goal in mind and achieved it.

My favourite thing about your army? The fact that they have mastered robotics but still insist on using crossbows. Very traditional like a proper dwarf should be!

Wow, your army looks great!
Almost tempting me to start dwarfs myself…

The dwarfs of both the badger hold and their fallen kin of the lava hold heartily approve of this army!

I like every single army decision, modelling choice and painting choice you’ve made.

The Hellfather really fits aesthetically, it’s a great mini. This army has left me awestruck. It’s a great looking Dwarven army, with loads of extra work done on the Elementals and shields, then you’ve got some fluff (I love that term still - lore isn’t the same). The stacking is next level though - it fits Dwarves to a T and is also eminently practical.

The dwarf stack is terrific!

Great job on the theme, they look imposing and uncompromising. A reminder for my dwarfs of The Fool’s Hold not to cross King Golloch.

I’m happy to heap more praise on this army

Superb stuff, from the Forge Fathers to the Malifaux to the conversions to make the Mantic Dwarfs even chunkier and more brutal (in the sense of brutalist architecture). Hell, the concrete elementals add to that brutalism too (I actually just zoomed in to see if they had rebar in them and actually were animated concrete O_O).

Also have to admire that stack o’ Dwarfs

It’s such a weird, yet brilliant approach on building an army!

So first thing’s first - Thankyou for all the positive feedback! It’s great to know that I’m not the only one who likes what I’ve done with these guys.

Anyway, I figured it was time to update the thread with what I’ve painted most recently… 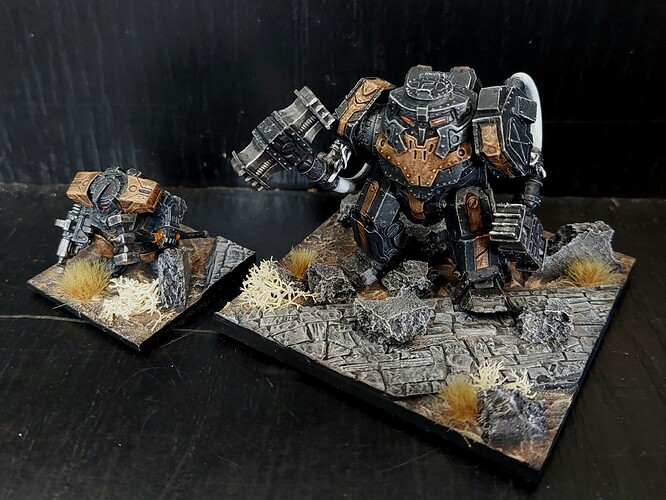 My Steel Juggernaught and second Greater Earth Elemental. While my Warsmith and Battle Driller are Forgefather minis, I feel like this represents my first serious foray into the range, since I very deliberately ordered these from Mantic!

I don’t really NEED a second Greater Earth Elemental. But as much as I love the original cork version, it doesn’t really match the more technological theme of the rest of my army. Hence why a second was needed! 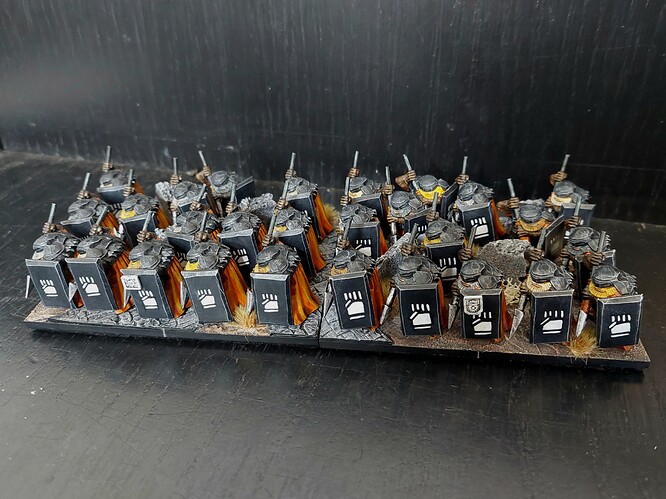 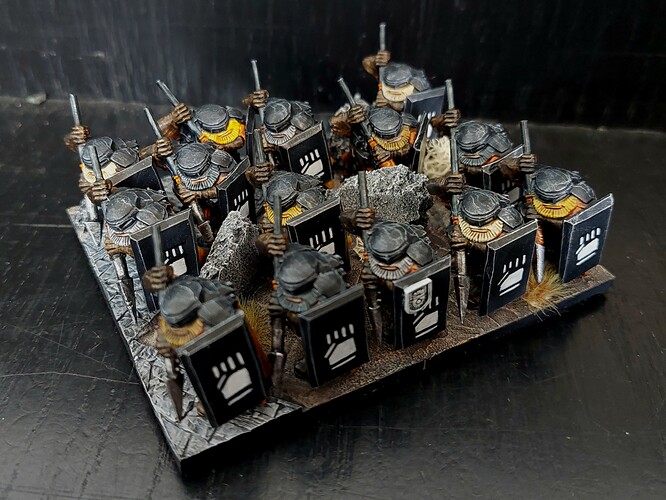 Bulwarker Regiment #2. I actually bought a starter box second hand just so I had enough of the right models to complete this unit! The fact that the new Dwarf formation in CoK 2022 happens to need two Bulwarker units is a very fortunate coincidence. 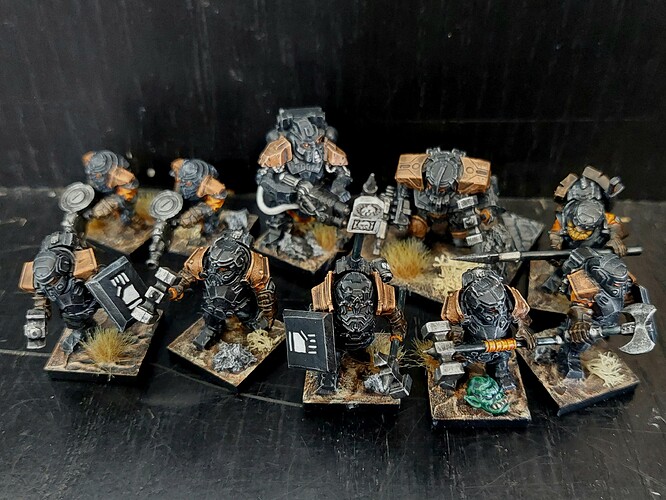 My Vanguard Warband, converted from Steel Legion Warriors. I’ve been reluctant to dip into the Forgefathers range for rank & file units, so to keep the technology feeling new & rare for my Dwarfs. But for an elite team of spec ops style dwarfs, I felt I could make an exception! 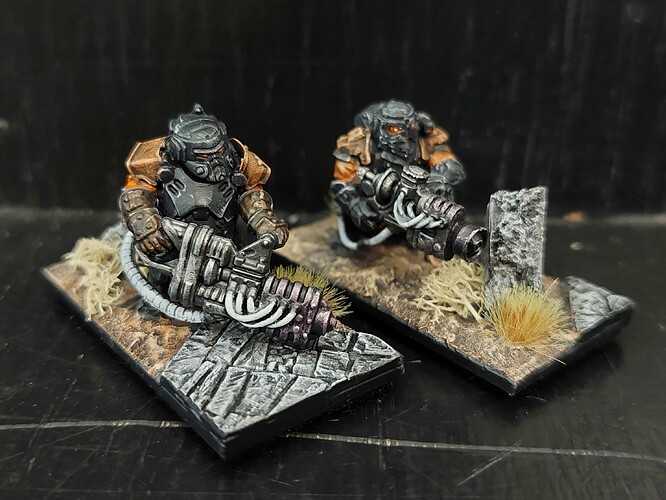 Battle Driller #2. Rumour has it that these guys will be getting better with the CoK update. I hope so. In my only game with them thus far, they arguably made my army worse!