January 2021 and another lockdown. With my Armada fleets painted up, terrain completed and gaming aids all sorted, it was time to look for another project to fill the time.

And then the Pit Gaming Shop (https://thepitgamingshop.co.uk/) came up with a modelling and painting challenge and it was time to decide what to start on. The Pit had said that the challenge covered any type of model, from WW2 battleships to Goblins. I was initially taken with the idea of adding a battleship to my Goblin horde but then decided that I should try to build the units for the Abyssal army that I have been playing on Universal Battle. And so, my January entry was decided – 3 hordes of Mollochs.

Raiding my unpainted mini pile, I came across the Loka chess pieces that I had used extensively last year and decided that these would make good Mollochs. The down side of these figures is that they are single pose and might lack visual interest on the battlefield. The up side of these figures is that they are single pose and don’t run the risk of bits dropping off models in the middle of the horde that are impossible to reattach. To counter the potential lack of interest, I decided to multi-base the hordes with interesting terrain pieces and a common theme. Raiding the unpainted pile again, I came across a smashed wall from Terrain Crate and a cursed fence from GW Endless Spells along with a cursed well and grieving mother that had caught my eye at a trade stall at a tournament (afraid I can not recall who from). 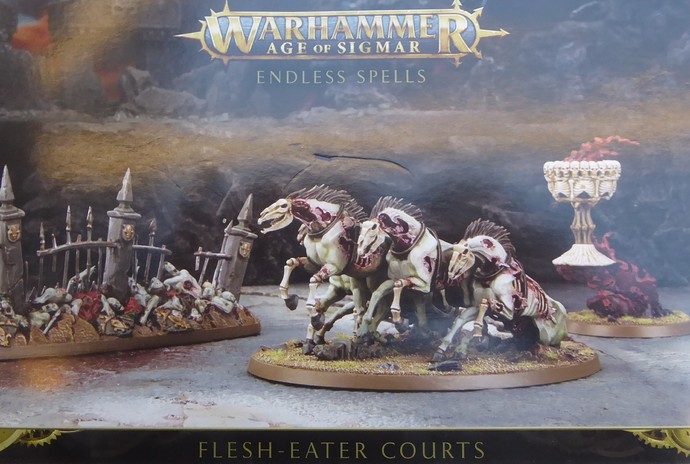 The Loka pieces are all from the ‘red’ set. 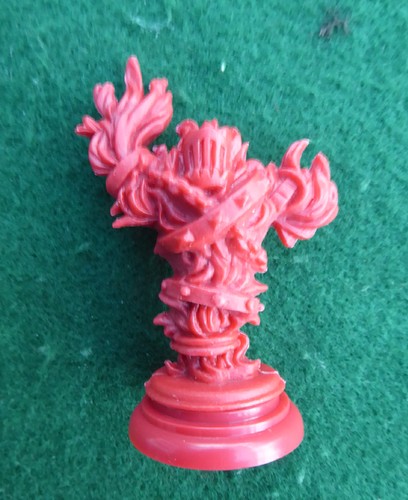 I had 14 of the 4-armed snake women and added 4 of the chained fire spirits to make the 18 models required. The Loka models are mounted on ‘plinths’ and I had a bad experience previously in trying to remove these. I therefore decided to leave the plinths on and accept that I would have to hide them in the finished bases.

I decided on a basic red/orange/yellow paint scheme with metal areas toned down with a red wash. 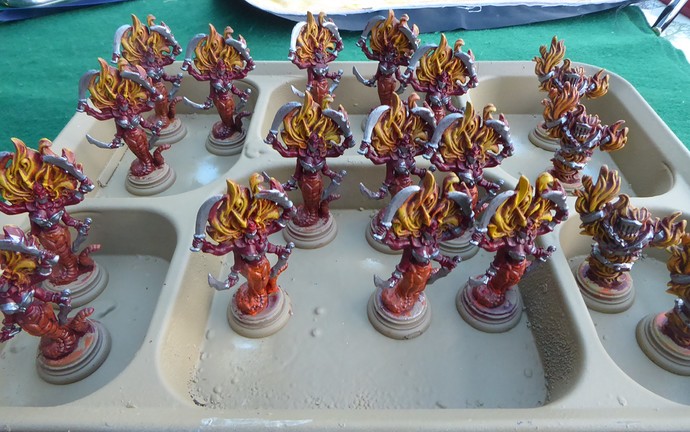 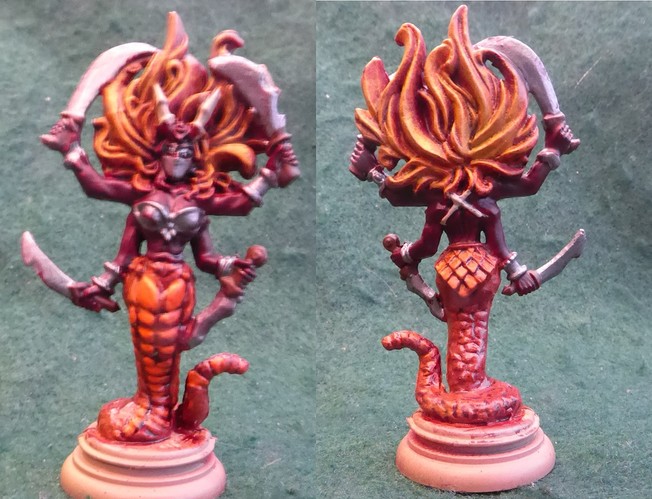 I prepared the bases to tell a story of the Mollochs emerging from the ruins of an Abyssal temple that had been fenced off and guarded against an Abyssal resurgence but overtime the seriousness of the threat had been forgotten and the guard force reduced. Consequently, when the Mollochs burst out of the ground, they were able to quickly overcome the guards and destroy the encircling fence. 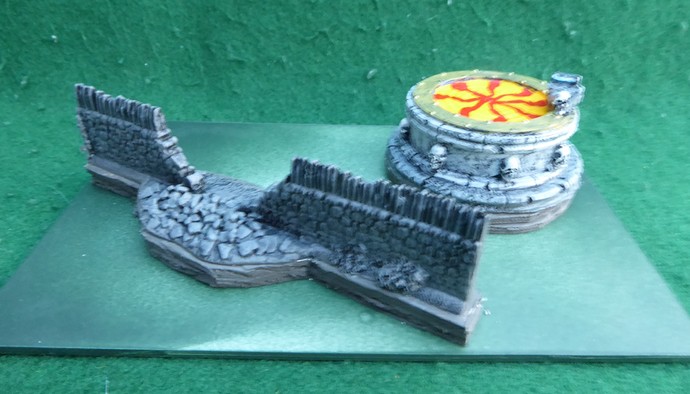 The dead defenders were undercoated and then washed with a bright green to show their souls being sucked out and swallowed by the Dark Ones. I cut the fence into 3 sections; this allowed me to split it between 2 bases and also to have a gap between 2 sections to allow the Mollochs to pour through.

The well from which the Mollochs emerged was painted Abyssal-fiery yellow and red with a top coat of water effect.

In order to hide the Loka plinths, I decided to add a layer of air-drying clay. However, this meant that all of the terrain pieces had to have additional bases to raise them so that they were not engulfed by the clay. 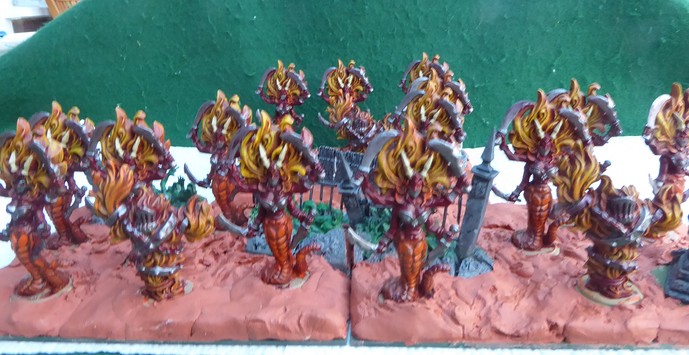 The clay also dried a reddish colour and so a base coat was required to tone this down before flocking. 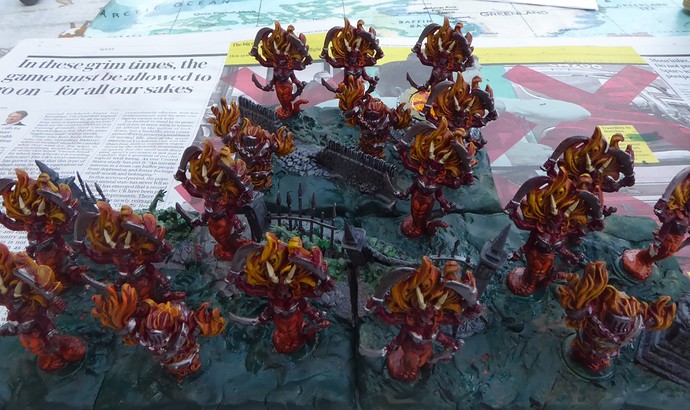 Flocking followed my ‘normal’ plan of dark grass and grey/black gravel. The gravel is Woodland Scenics’ coarse ballast mixed in the ration 2 grey to 1 black. 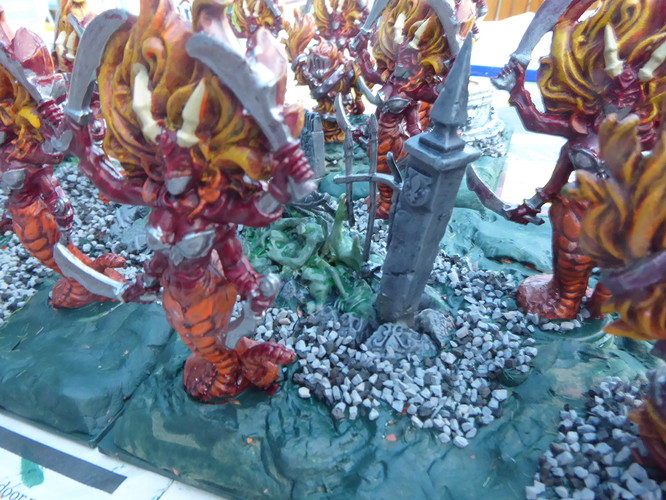 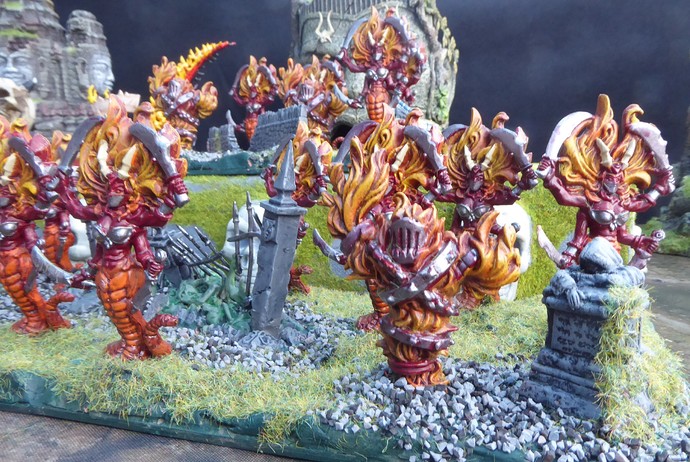 Here are some photographs of the finished hordes and the background fluff to go with them. 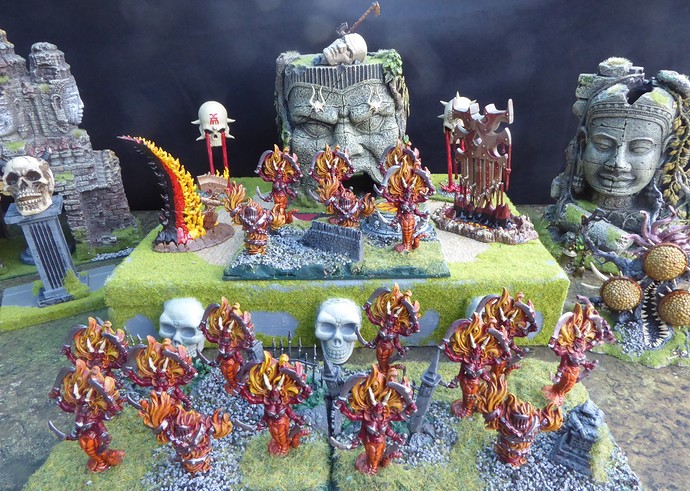 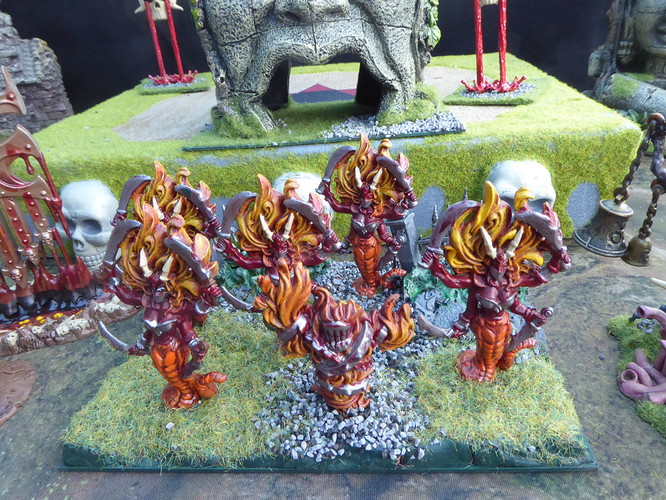 Years ago, there had been an Abyssal incursion centred on a temple raised by cultists. After the incursion was defeated, the temple had been left to decay, surrounded by a wall and fence and guarded by the Watch. A statue dedicated to the grieving widows of those who fell, was placed near the temple. But over time, the memory of the incursion faded and the Watch grew complacent. When the eyes in the statues of the ruined temple started to glow one moonless night, there were few of the Watch on hand to guard the fence. When the monstrous Mollochs emerged from the gloom, the wall and fence were quickly breached and the Watch found itself out-matched. Death came quickly, and only one member of the Watch escaped to tell the tale. He stumbled, half mad with terror, back to the village and related how death as not the worst thing to face those who fell. Even as their bodies hit the ground, they started to glow a sickly green and their souls were sucked out to feed the evil ones of the Abyss. 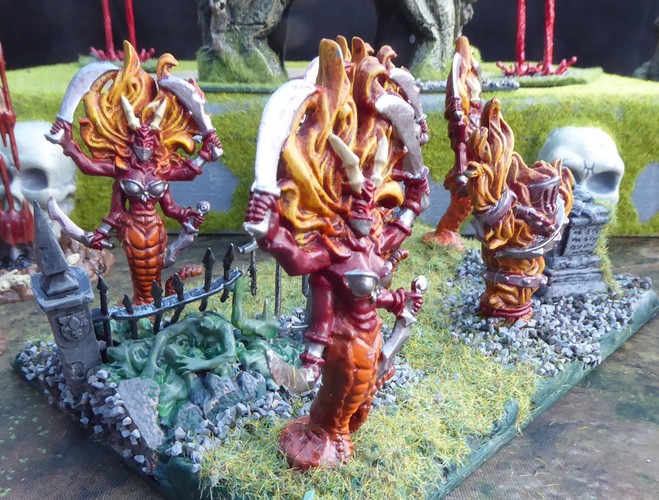 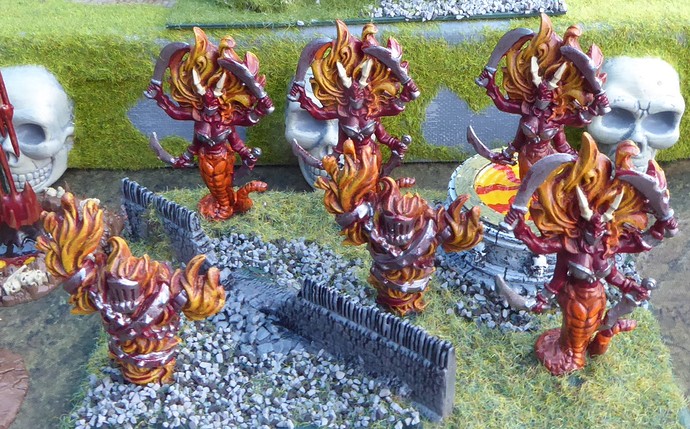 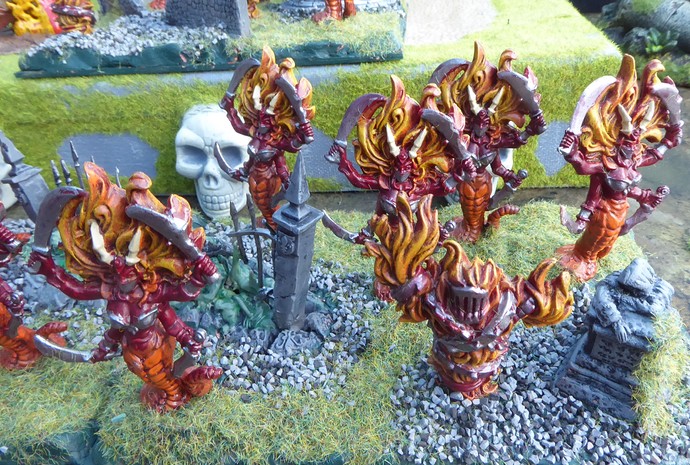 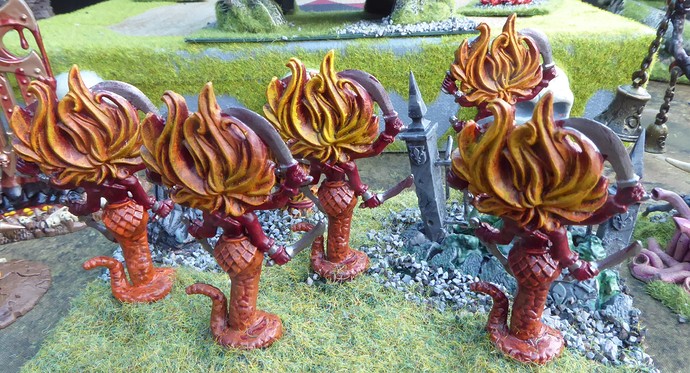 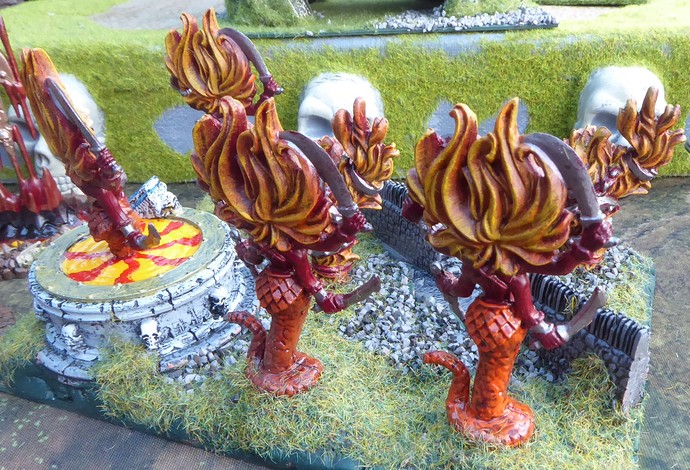 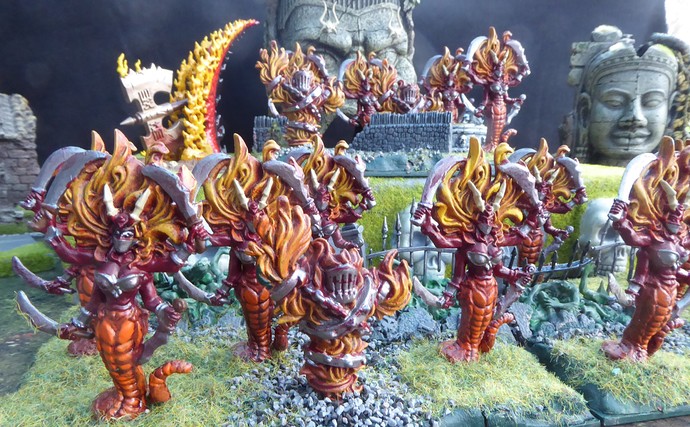