I guess during a pandemic is not the most natural time to post this, but I every so often get a question about these rules so I thought I’d post them somewhere central.
Fred’s/Giant Dwarf rules for multiplayer games of Kings of War, previously known as Kings & Treachery after the warhammer rules called Triumph & Treachery.
Renamed to KoW Battle Royale in an attempt to remove it from the warhammer heritage/trademark.

I sometimes tweak the rules a little.
This is the latest one from September 2020: 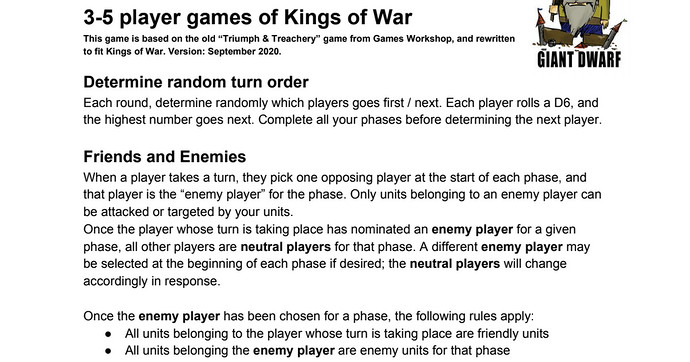 Hope you enjoy.
Many thanks to those who have played it and helped tweak it over the years, like Vidar, Henning, Øyvind, Martin, Jens, Magnus, Eirik, Chris, and I probably forgot someone.

It should really be called Fun Ultra Chaos Diplomacy Multiple Enemies, or FUCDME. Just my opinion…

A great game . Enemies have never been closer and closer friendships are your worst enemy.