Stane of Blood was a 3 game, 1995 point KoW tournament held in Woodmansterne over last Saturday. Moonraker Andy and I represented the Moonrakers at this event.

I decided to run my Goblins using the new Explodomatics Formation… I had: 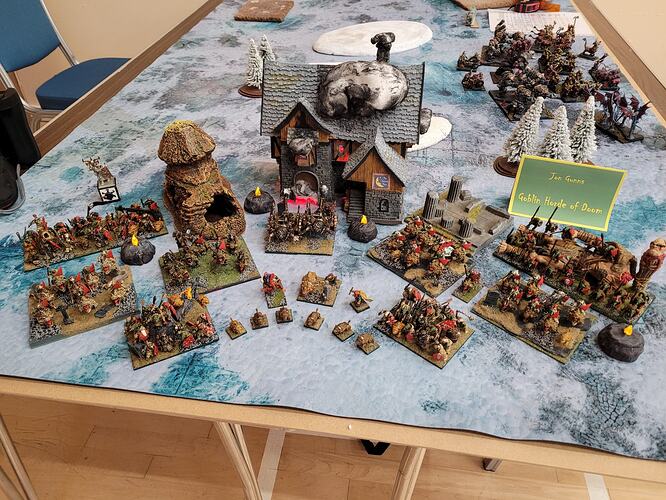 Andy was running a Varangur list with lots of Fallen: 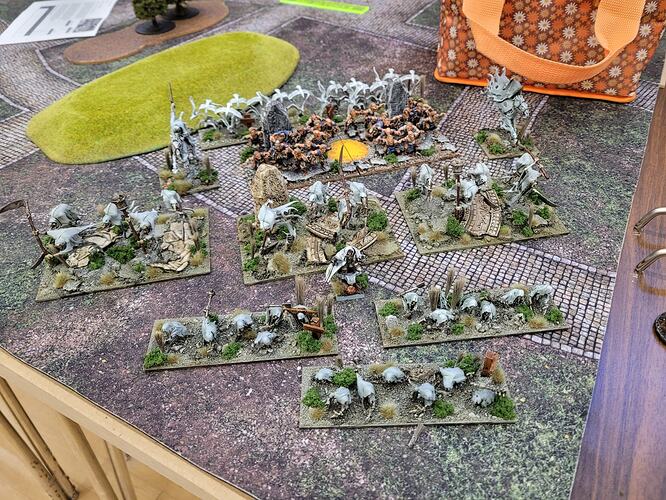 The event had a leisurely midday start and so the Moonmobile cleared New Sarum controlled airspace at 9 am, 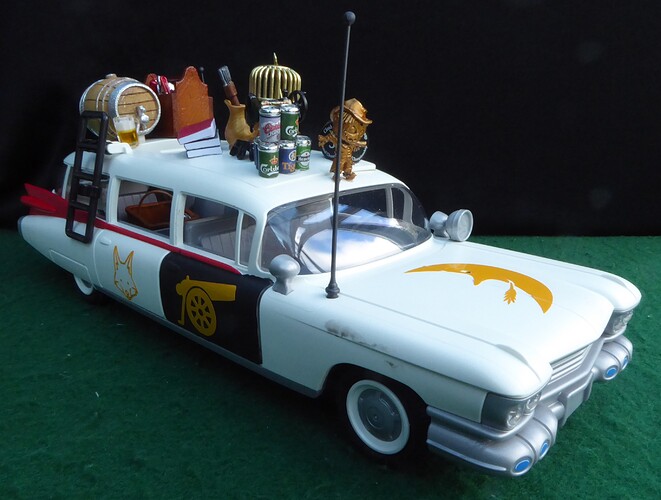 arriving at the venue in good time for a relaxed coffee before gaming commenced. 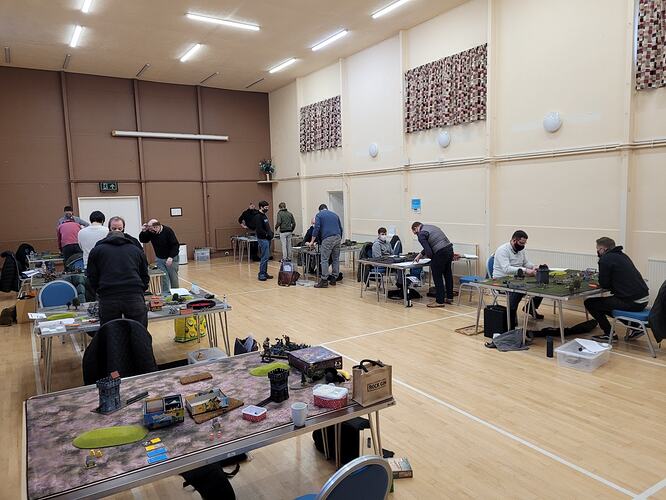 I met up with Matt for the first game. Matt was running an Abysmal Dwarf list with: 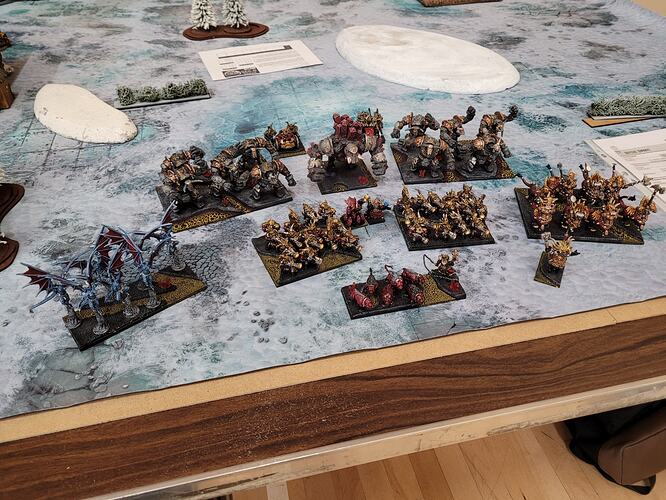 I was worried by both the Defence 6 and the shooting.

Matt deployed with his Golems on my right, the Greater Golem in the centre and everything else on my left. I deployed my Rabble in the centre supported by Luggits and Mincers with the cavalry on either flank hoping to nip in for some tasty flanking action. 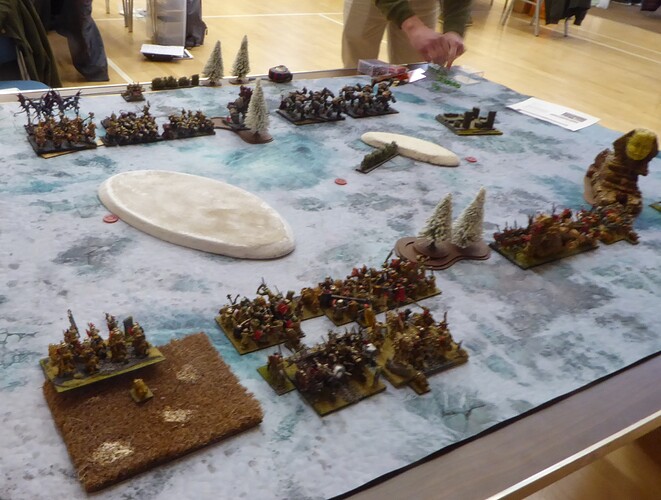 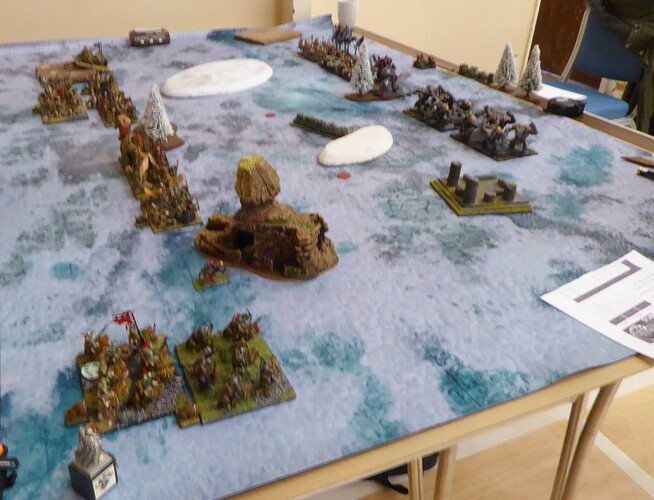 This game went one way and then the other. Matt’s mortars were woeful (from his perspective) but his Decimators were making short work of my De 4 Goblins. I had great difficulty in getting through the De 6 Golems in combat, inevitably setting me up for a sound thrashing in the inevitable counter-attacks. Despite this, I ended up at the end of turn 5 holding the right hand token and dancing out of reach of the Golems while on the left, my Mincer mob held a second token. Matt was holding the central token with his Golems.

And then turn 6 arrived with a moment of madness as I blocked line of sight from his mortars with my surviving Fleabags – only to drive my Mincers with its precious token onto a hill top where they proceeded to belch black smoke in an apparent attempt to attract the attention of the bemused Dwarf mortar teams. Perhaps I had been lulled into a false sense of security , thinking that they could not hit a barn door at this distan … They could.
Splash one Mincer Mob. End of turn 6, one token each.

But, Turn 7. In a carefully considered and expertly executed manoeuvre (read Hail Mary) I managed to kill Matt’s Golems holding his token and as the seconds ran out on my clock, I claimed a particularly unconvincing victory by one to nil.

During the lunch break, we had the opportunity to view some of the excellent armies on display. The standard of painting these days is fantastic with stunning armies everywhere you look.

There was, however, an unfortunate incident during lunch. In the course of the morning, Danny Graves had inadvertently insulted Steve Hildrew by calling him a fat headed Bobolyne and Cumberworld. In his turn, Steve had unconsciously called Danny a Fopdoodled Drate-Poke. Despite the fact that neither intended insult, both determined that satisfaction could only be achieved through a duel. Swords were produced and they set-to. 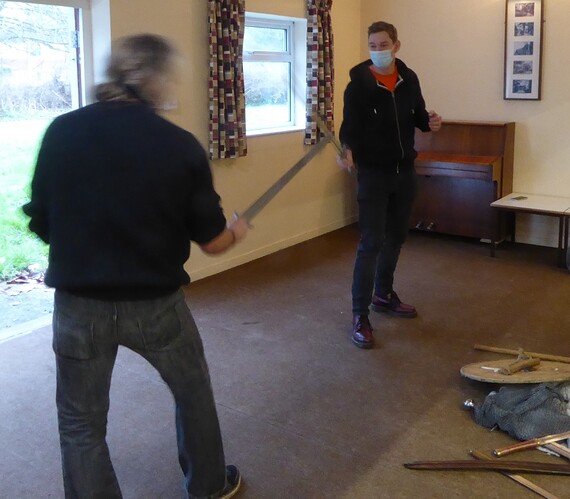 Steve advanced on the diagonal, hoping to catch Danny out, but he easily deflected the blow and took advantage of Steve being slightly off balance to pass forward and strike himself. Steve shed Danny’s blade in this attack to set up his own counter-move. The battle swing one way and then the other and we were treated to some dazzling foot work and fancy sword play. Ultimately however, Danny’s experience showed and Steve found that good looks and fine wit can not prevail against strength and training. There was blood everywhere. It was awful.

Actually, that did not happen at all. What did happen is that Danny laid on a demonstration of mediaeval fighting techniques, using Steve as his accomplice. It was a really interesting session.

Mark is more normally seen piloting huge numbers of giants around the table and so it was somewhat of a surprise to see him with more Rats than the pied Piper could comfortable have dealt with. 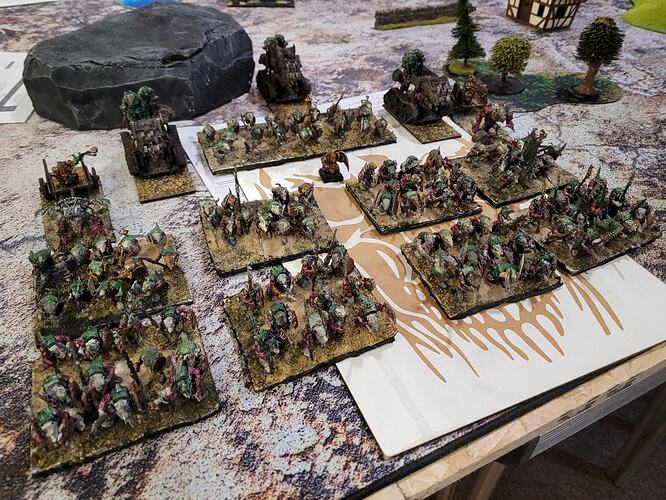 We were playing Smoke and Mirrors and as we deployed it became obvious that I had placed my scoring tokens on my left and Mark had placed his on the right. I hoped to get my fast cavalry into his flanks and decided that it was important to kill as much of the fighty stuff as I could early on and try to avoid the Rat regiments. 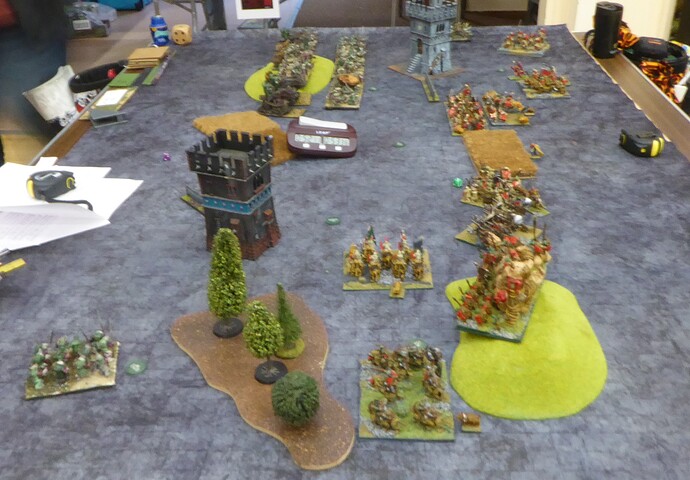 Early in the game, Mark charged one of my Rabble with 2 of his Death Engines. Killing it easily, he then tried to over-run into my second line but failed to roll high enough, leaving him stranded to face a furious flank attack. We continued to trade pieces with his Last Breath attacks causing huge destruction in my Goblin’s De 4. My Mincer with its De 6 was more successful, surviving 2 Last Breath attacks with no wounds.

The game was closely balanced, and like the first game it swung one way and then the other. 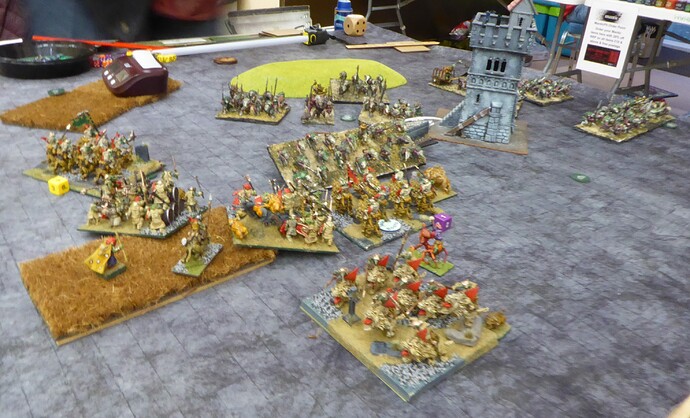 Late in the game, one of my Fleabag regiments was lucky to survive a flank attack by a Rat regiment and was able to charge and kill the regiment guarding one of Mark’s tokens and as we went into turn 7, I was able to wrap up a surprisingly large win which did not reflect the tightness of the game.

Chris was running Elves with:

There is not much to say about this game. I played badly, mis-positioned pieces and failed numerous nerve rolls by one point.

Perhaps I should add that there was someone else involved in this game, Chris, who played his army very well and smiled politely and commiserated with me as he swept my army into the bin.

I walked forward and was shot. A lot. At the end of the game, I was left with 2 Individuals while Chris had 2 hordes and 2 regiments in the Dominate zone. Even by channellinf my inner Boris Johnson, I was hard pressed to spin this as a good result. 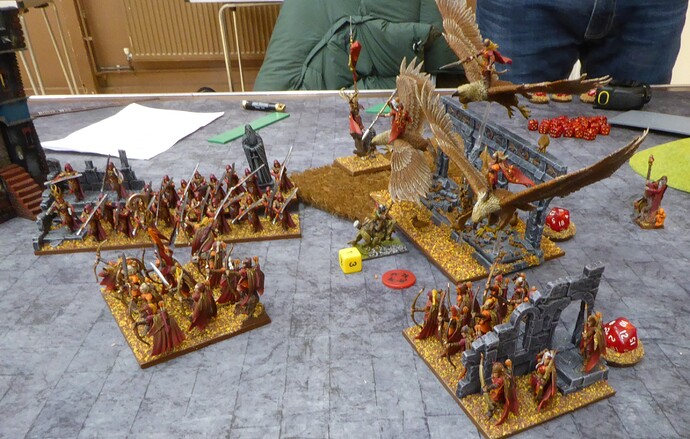 I have answered, to my own satisfaction at least, the question: “Are shooting Elves back in the meta?”. 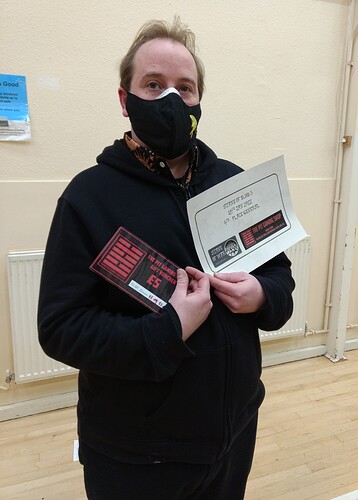 and I came in 7th. Of my opponents:

Matt finished 15th
Mark finished one place above me in 6th
Chris piloted his Elves to second place.

Many thanks to all of my opponent and to Matt G and all of those involved in preparing this event – it was really great.

Glad you had a good time! was a pleasure to host it. Here’s to the next one!

As a fellow recipient of Chris’s generous gifts of volleys of arrows, I can only commiserate!