Starting with an enemy closer than 1” / when does it NOT apply?

If your unit is not Engaged but begins its Turn within 1” of an Enemy unit, it may still move freely as long as it ends its Turn no closer to the Enemy unit than where it began.

(edit: yes, the above was the correct answer)

2) or does the use of not Engaged refer to the same unit which it starts nearby, in effect: “If your unit begins its Turn within 1” of an Enemy unit which it is not Engaged with", meaning it always applies, in all cases (with Withdraw being the only exception as that has been specifically stated as the intention)

(edit: marked as spoiler because it was the wrong answer)

edit: In other words, the following move is NOT possible: 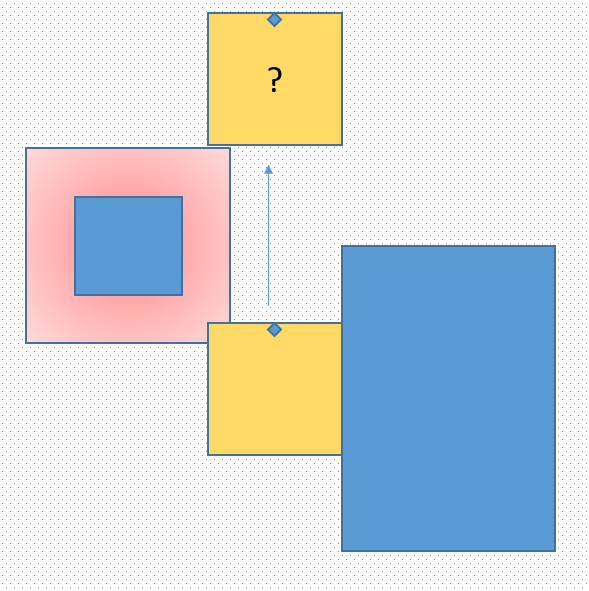 In my view Engaged is a yes/no state, as set out in the first para of the amendment. 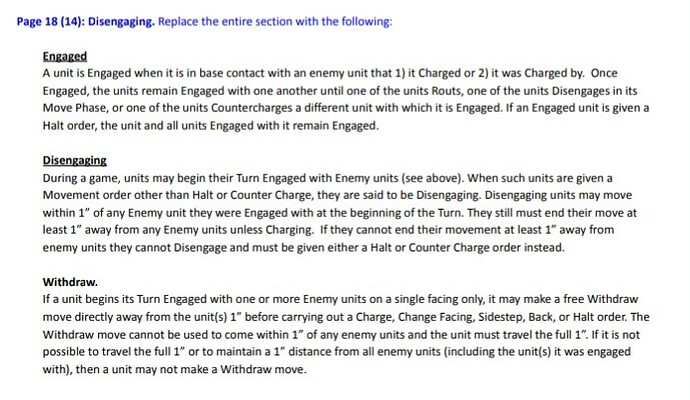 Your opinion is valid, but in the minority it seems. The reasons the majority of people think otherwise is guesswork from my part, but it might be because it is not intuitive, so creates an additional road block to fully understand the minutiae of the move and charge parts of the game. When there exists a rule in the game saying the units who break the 1" rule with regard to your units, give your units the opportunity to break to rule back in regard to them again, seem logical to use a blanket rule across the entire game, IMO.
edit: Withdraw did become more strict, to at least help at lot against units “running off”. But to run away with simply an At the Double when having an enemy in the flank (a disengage via move order) has always been very possible.
edit2: I would not mind it if it was ruled to work like you suggest, by the way! Let’s see which way the RC goes with it!

At the Double has been deliberately excluded from the Move orders you can be given after a Withdraw, but if only attacked in the flank or rear you could potentially still be given that order to Disengage (“run away”)

In my experience KoW rules are written to mean exactly what they say and often need to be read carefully.
People then get confused by assuming things that are intuitive, but not actually there; or conflating similar but separate rules.

Definitely option 1 as far as I am concerned.

People then get confused

but when those people are some of the biggest players in the US Masters scene, who have a friend or two on the Rules Committee… things tend to get errata’d their way in the end.
So I’m going along with their opinion for now.

I have always interpreted the rule as #1 but was never happy with it, #2 would be a better option in my opinion. I feel a bit rusty about the KoW rules after not playing due to lockdowns for too long. However, I recall having even more issues with the discussed rule. E.g. a unit is charged, no wounds are scored, but the charged unit remains Engaged and cannot Move/Withdraw due to presence of nearby units making it impossible to get 1" from the enemy that charged the previous round. If the interpretation #1 stays it makes really a big difference to how the game is played with respect to a previous 2ed when the units were kept separated after any combat. At least the 3ed rules on Engaged and Withdrawal were sold to us as there was no big change excepting the cases when a unit is locked in combat on two sides or was disordered.

The wording of the sentence doesn’t allow your interpretation, IMHO. “If your unit is not Engaged” can only refer to your unit, not the enemy unit.

In some respects units that are engaged get more options, as they may be able to withdraw before moving, but mostly they are more restricted. That’s because they’re engaged in combat, which limits their freedom to wander off somewhere else. To my mind, the rules on Engaged and Withdraw are all about clarifying what Engaged units can do, and it doesn’t require a separate statement to make that intention clear.

What about the fact that the sentence used to be under the paragraph for Disengage? it lead to many assuming it was valid for units to use also when disengaging. Regardless of the actual words used. when reading it properly you can pick it apart easily but many have read it quickly and assumed its intent. sure it says “turn” instead of “move order”. sure it says that it works when “not engaged”. So RAW there is no doubt. So why do influencal and normally very “in the know” people like Matt Carmack, Tom Annis and Todd Serpico just dismiss it out of hand and say that it’s meant to be understood differently? Do they know something we don’t (upcoming RC decision for instance)?

I have put it to a vote! Much democracy, such Forum! Check your messages everyone!

Hmmm, I believe the rule means exactly what it says, option #1, but would like it changed to #2.

How should I vote …

Vote how you want the rule to be played. So I would vote 2 in your case.

OK, thanks, so I did. It should be good to side with the boss here.

I don’t mind what the outcome will be, now that I put it to vote it’s comfortably out of my hands

when reading it properly you can pick it apart easily but many have read it quickly and assumed its intent.

Which is where most rules confusion in KoW comes from.

I’m honestly still confused regarding the whole Withdraw thing…
Can you, or can’t you withdraw if there’s someone else within 1"?

I understand that Tom Annis said that you can’t withdraw, but that’s not really official.

I definitely would hope that you can, since otherwise this is yet another Kings of Squares moment, where normal units get the short end of the rules…

I have been told specifically by Pat in the RC that no Withdraw is possible if you are not 1" clear of all enemies. Of course I wish I didnt need to namedrop anyone, and that it just could say extra specific in the rules.
I really seems like they assume that new rules > old rules, which isn’t barking mad I suppose.

Think the biggest issue is that the reworded rules in the FAQ effectively changed how it works from the previous version, rather than simply clarifying it.

As commented above, I think the wording is clear and it makes sense as a whole, but was quite a big shift without anything more said about it.

Note - I don’t however feel that the RC need to explicitly provide full reasoning or justification for changes.

So, the forum member vote is over, with 76% voting for this outcome:

If your unit is not Engaged but begins its Turn within 1” of an Enemy unit, it may still move freely as long as it ends its Turn no closer to the Enemy unit than where it began.

In other words, the following move is NOT possible: