Instead of flooding the monthly showcase with a million WIP pictures, I thought I would be nice to have specific place to drop the progress on my first army.

I’m building a Green Lady list - you can find it in the army list section if you care to -centered around the Archduchy of Aguiéne, nestled on an upland plain in the Dragon Teeth mountains. Whilst traditionally very prosperous, the Archduchy is falling upon hard times: its ancient feudal organisation coming under more and more tension from within and without even as it’s economy is overtaken by the more modern trading-based cities to the south. The disastrous wars around the Abyss have made their cost felt even as far west as Aguiéne, and the peasants grumble at the cost in lives and coin of the noble lord’s fondness for far. One day, soon, the Archduchy will have to join modernity or be ground under its foot.

Still, the knights of Aguiéne ride tirelessly, fighting the Archduchy’s neighbours for plunder, chivalrous deeds, and the joy of battle. If the end of their path in life is coming, one way or another, at least they will make a beautiful exit.

So, without further ado, here’s four of the five heroes who will lead Aguiéne’s army to many a glorious defeat: 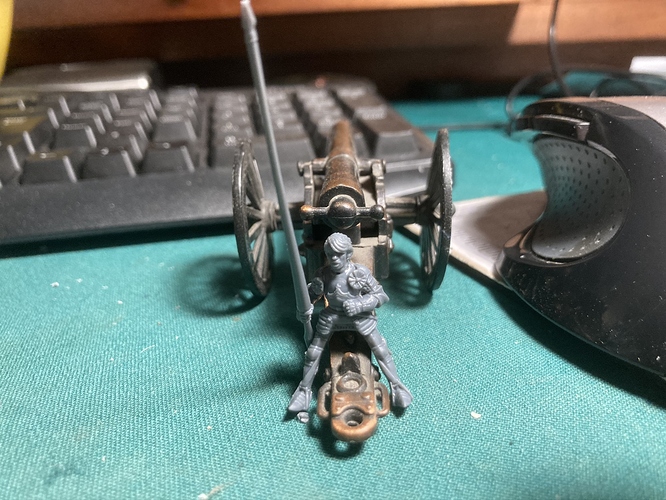 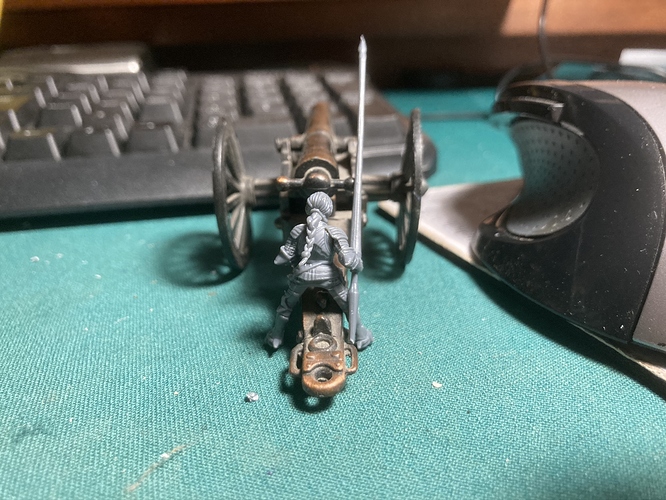 She’s a Perry mounted man-at-arms with a Frostgrave female soldier’s head. Her griffon is on it’s way, but apparently the high elf rider is molded directly onto the GW Island of Blood griffon, and he’s a bloody pain to get off. Thus, she’s here depicted riding a cannon annex pencil sharpener that I had lying around… 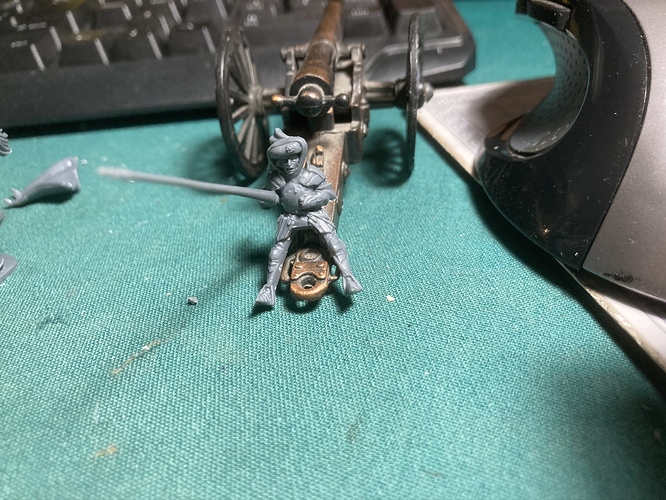 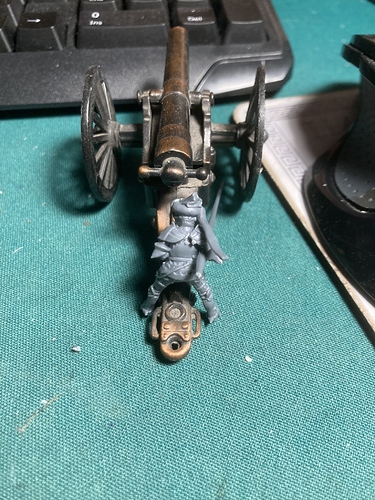 Just a straight up Perry man at arms, with similar griffon-related issues to his wife. 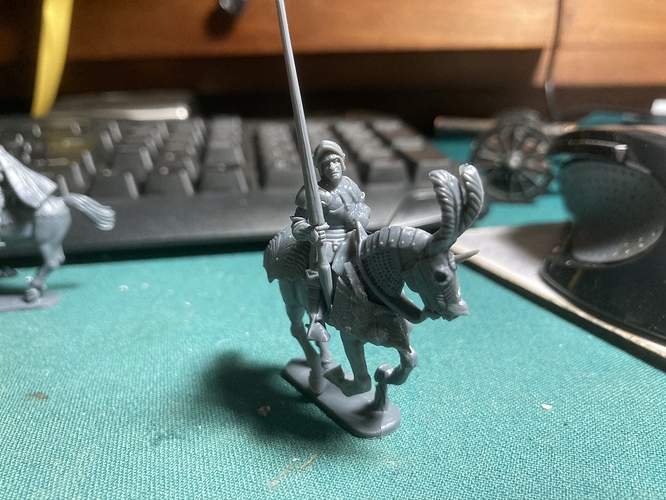 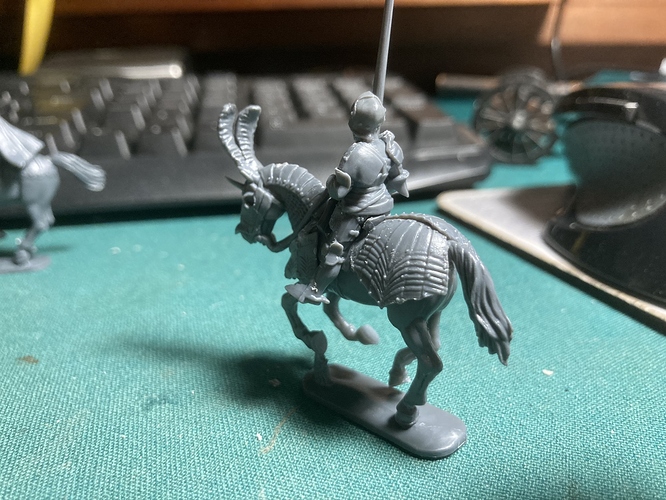 And finally, Ermenchilde, Chief Priestess of the Fields 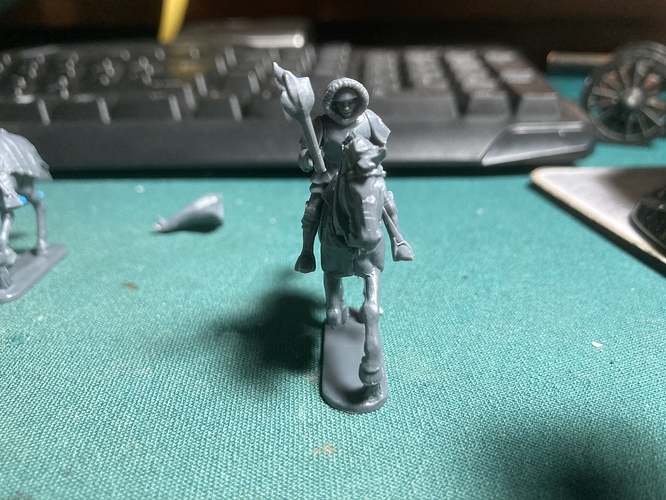 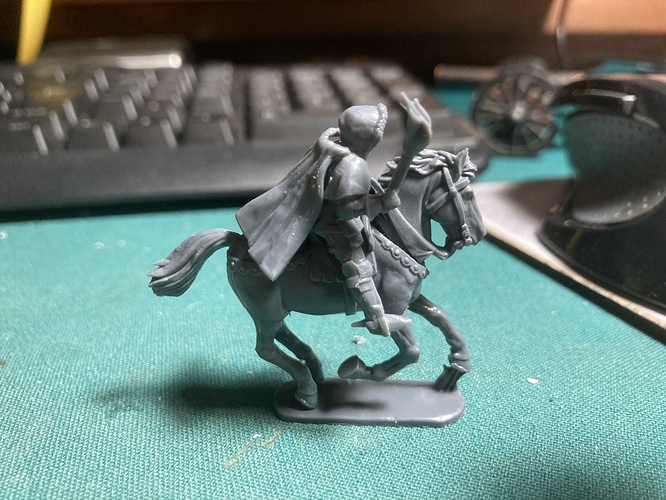 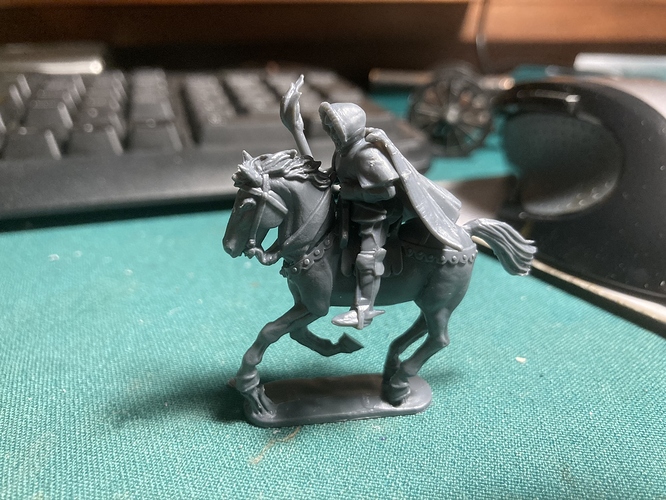 Another man at arms, with a Frostgrave, head, cloak, and torch. This is going to be my first ever attempt at OSL - wish me luck

I’m not going to paint them all at once, but probably space them through the sixty retainers and twenty cavalrymen I still need for the rest of the army. I just wanted them assembled first, so I wouldn’t end up lacking the parts I wanted for them because I used them all on a random peasant.

Yeah, the rider on the gw elf griffon is attached. It may, from what I remember, be easier to cut the whole model/saddle off and rebuild, rather than trying to simply remove the rider?

That stinks. What about the reaper alternative? This is the beast with a few WIP photos:

I already bought two of the Island of Blood ones…

It took me a day, buying new tools, and relearning basic Milliput, but they’re on there now.

This is basically what I ended up doing; I’m going to have some beautiful enscorcerelled elf armour objective markers at some point…

Nolzurs d&d range also has a flying griffin that will fit a perry rider (there was a standing one in an earlier range that was nice, but couldn’t have a rider - unless surfing style!)

So I gave up on waiting for decent daylight: here’s the Archduchess and her consort, mounted on their griffons, in glorious black-and-white underpaint: 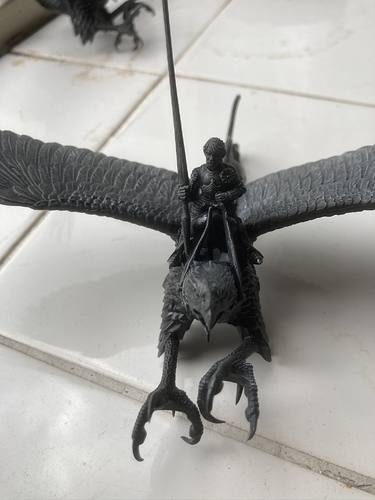 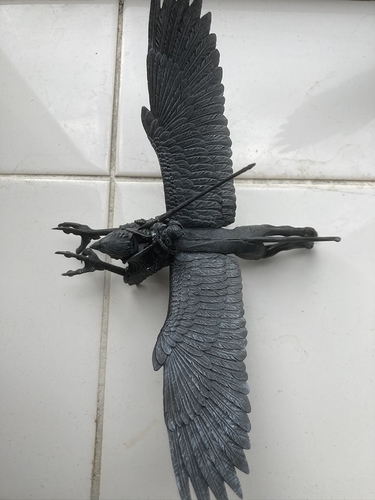 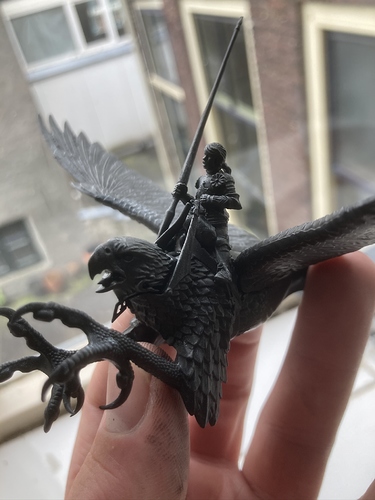 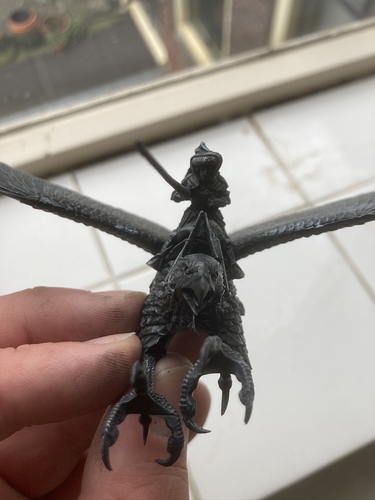 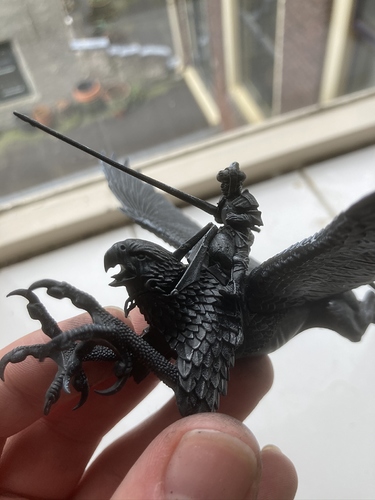 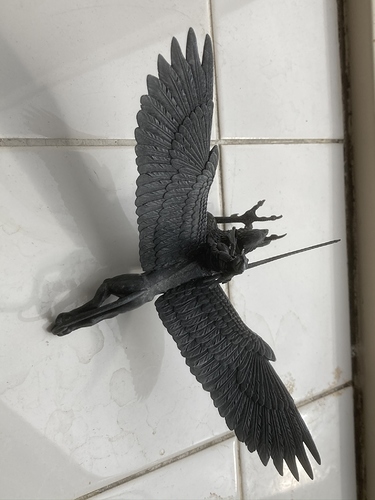 I haven’t put them back on their bases yet, as that would only make painting harder, I think, so please excuse the fingers… and the bad lighting… and lack of details…

And to get some variation from all the big monster work, a regiment of retainers - Frostgrave female soldiers and Perry Men at Arms in various configurations. 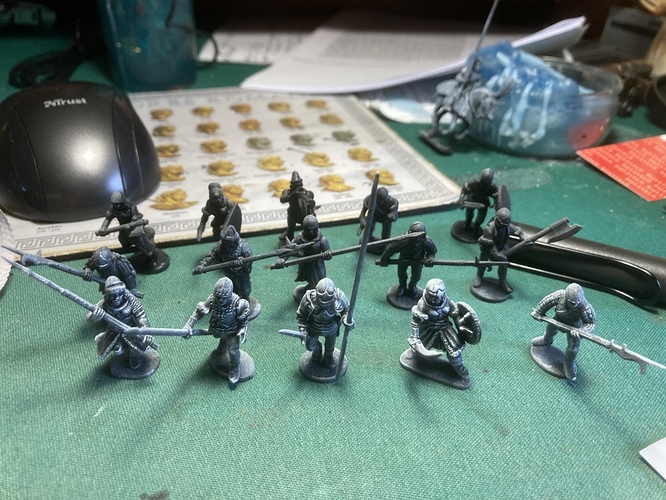 WIP on the retainers (sorry, the light in my home is crap and probably going to stay that way until may at the earliest…) 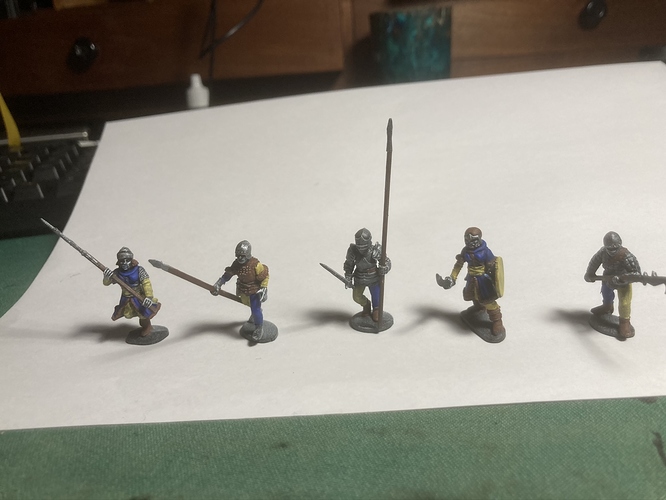 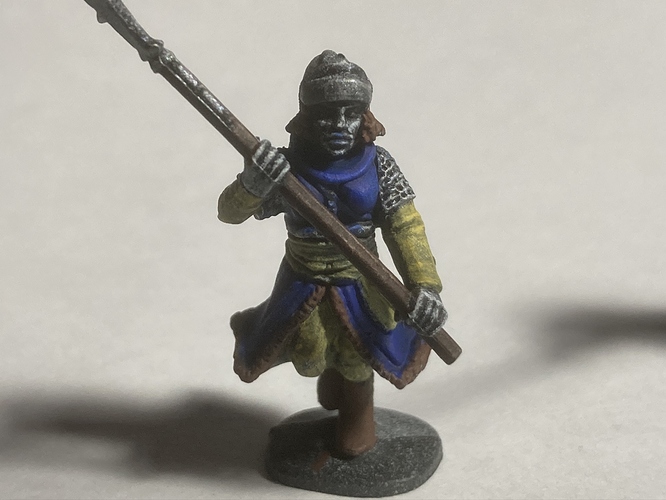 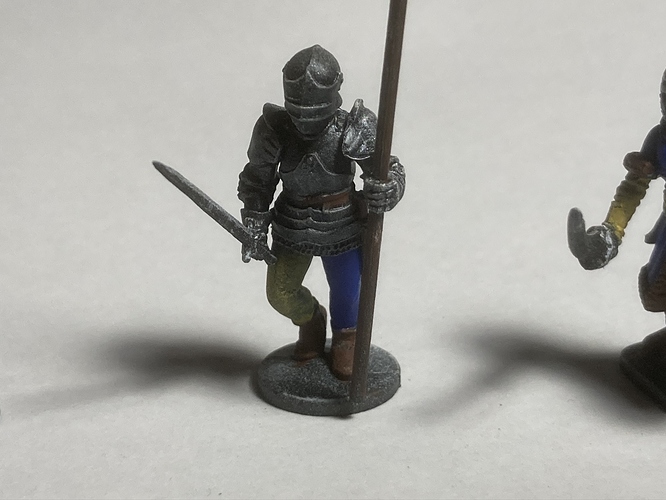 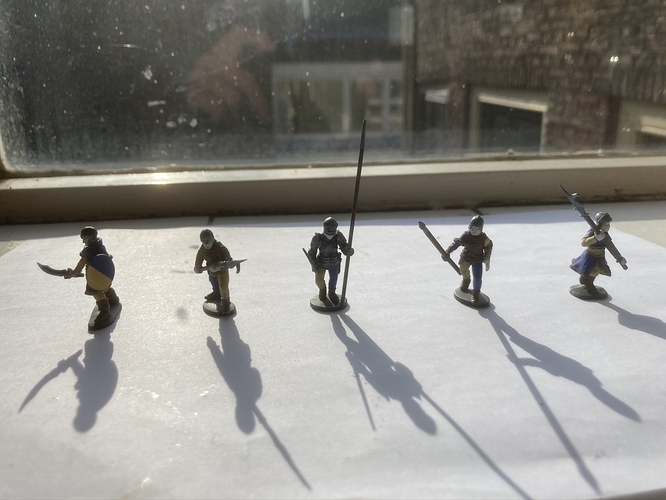 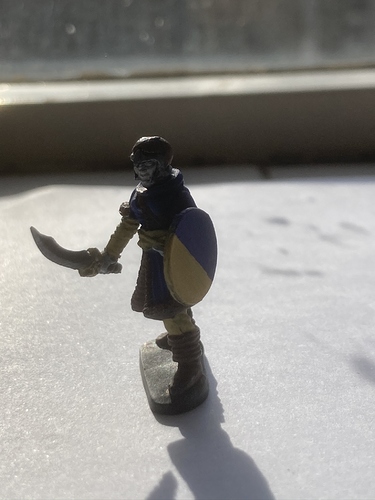 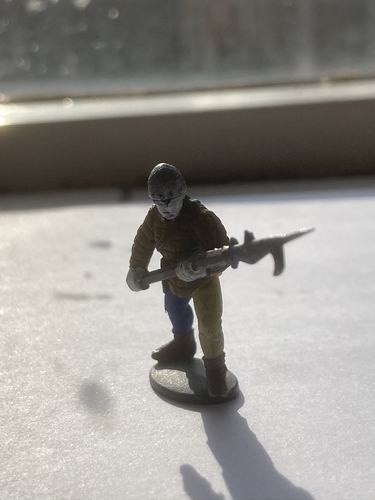 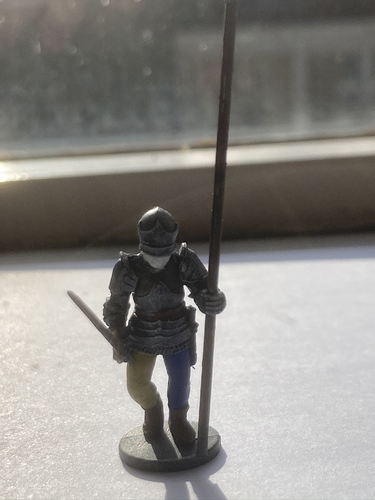 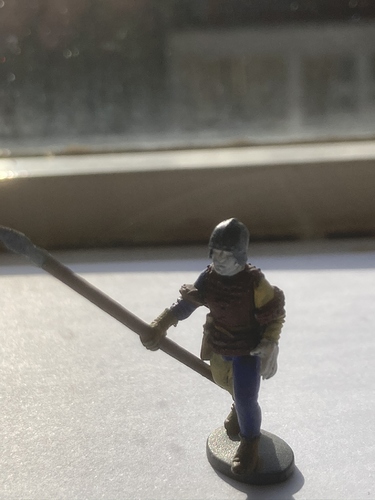 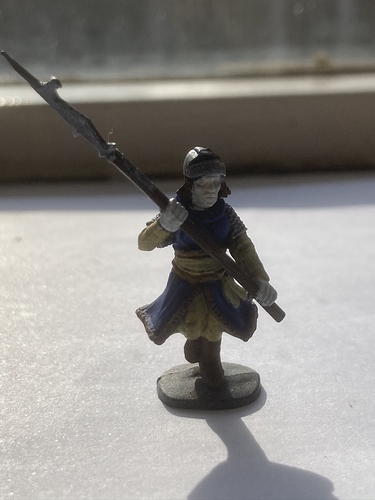 And here’s the finished retainers, complete with some backstory:

The retainers are the town’s contribution to the Archduchy’s defense: every walled town must maintain and pay a company of militia to contribute in times of war. These troops are not armed or armoured according to any regulation, but equipped as the towns funding them see fit. They often keep day jobs besides the weekly day of compulsory military exercise, but when the Archduchess calls, they drop everything to flock to her banners. There, they are combined into large blocks of heavy infantry, who provide a solid centre for the knights and griffons to work with. Though they do not live for battle and blood, as some other races, nor hope for glorious deeds as the nobility do, they are hardy men and women, trained, equipped, and not to be underestimated. 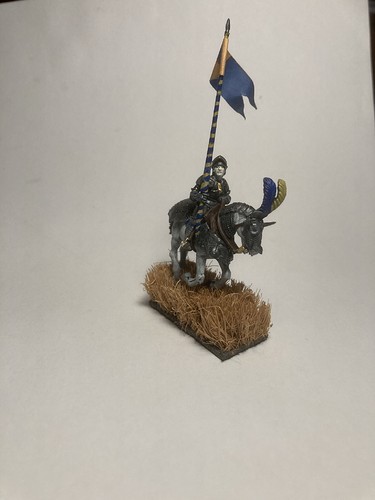 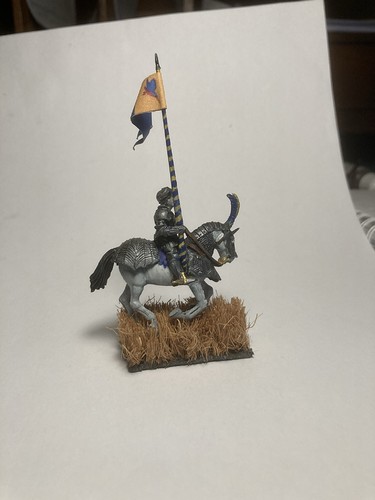 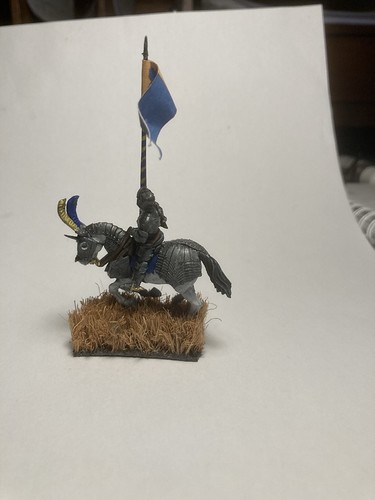 I finished painting Anne de Montmorency, Count of Talence and Connétable of Aguiéne. The Count of Talence is in many ways symbolic for the Archduchy as a whole. In his youth, he fought in the Ordre des Marches (more on the Knightly Orders in a later post) and built a high reputation for gallantry and inspirational leadership. Upon the ascencion of the present Archduchess, this reputation won him the coveted position of Connétable, personal champion of the Archduchess and commander of her forces in her absense. At the battle of Talence, his raiding force was isolated from the main army and surrounded, but he lead a decisive charge into the enemy ranks, and carved a way out, saving many. For this victory, he was named Count of Talence even though members of the Ordre des Marches normally do not hold lands. Since then, he has lead the forces of Aguiéne through many victories and many defeats both. A man grown old in his armour, he has not lost either his courage or his skill with the years - but for how long can courage and dedication preserve him from the dangers of the battlefield?