This is a new army I’m putting together for the 2021 Central London KoW Grand Challenge. The objective of the challenge is to get a new or refreshed 1495 point army ready in the first four to five months of 2021. The idea being we’ll hopefully have some new armies to play with after enough of the population has been vacinated for us to actually use them.

The East Ophidia Company. An expedition of well trained and superbly armed Dwarf miners, traders and mercenaries. The company have been granted a charter to mine gold and other precious resources in the lands betwixt the Nun-Pevet river and the Pillars of Anokhet in the name of his majesty, High-King Golloch of Abercarr.

For the challenge I’m going to be putting together my second proper Kings of War army. As I already have most of the models ready to go, I’ve opted to go for Dwarves (of the Imperial varierty). The army is going to be called “The East Ophidia Company”. Inspired by the Greybeard’s Prospectors minor faction from Total War Warhammer 2, the idea is that this is a group of adventerous miners, traders and mercenaries hoping to strike rich in the endless deserts of eastern Ophidia.

I wouldn’t consider myself a particularly fast or accomplished painter, and I’ve got a two year old, so like a lot of you out there I’m pretty strapped for hobby time. As such, I’ve opted for a fairly low unit count army. That said, I like my Dwarfs to be on foot, so it’s going to be quite infantry foccussed. The units will be multi based and be preferred model count (PMC), so regiments of 15 and troops of 7 or 8.

Here is the list. I’ve also cheated slightly by spending quite a few points on artefacts and upgrades, but this fits with the lore that these guys are an elite force, well financed and equiped with the best weapons and armour.

I have models for all of these units already, minus the Sharpshooters which I’ll be putting in an order from my FLGS The Pit. The backbone of the army will be Mantic, with a few pieces from Battles for Skulls Pass that I want get some use out of.

I’ve managed to do a quick test model to confirm that my colour scheme is feasible. The plan is to go for a mostly yellow/silver scheme, with yellow/white heraldry as a nod to the TW faction mentioned earlier. I’m cheating a bit with the yellow and an mostly going to be using Desert Yellow from the Army Painter range. It’s a bit on the dark side, but has much better coverage than the brighter yellows I tried. A spray can of the stuff for base coating is on the way for added speed of base coating.

So long as I can stay focussed and dedicate a bit of time each night, I’m hoping to get one regiment and one or two troops, war machines or heroes pumped out each month to stick to the target pace. I’m only aiming for tabletop standard, so hopefully that proves to be realistic!

Anyone, enough rambling. Here is what the army currently looks like! 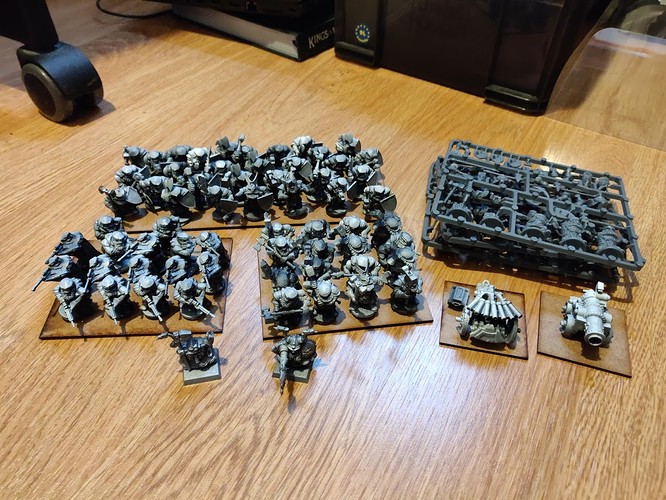 Most of this came from a Dwarf Army box which I bought on a whim, so I’m pleased to be getting some use for it. I’m going to be using Ironclad instead of actual Ironguard models, but they pretty much look the same anyway.

Here is the current progress status:

I’ll see you in a month, hopefully with a couple of units to show!

Nice packed units, even with PMC. I’m a fan of the organic feel that PMC allows for, with some space for minis to breath. Speaking of, good luck building / painting the throng!

Yeh I agree, I think PMC depends on the models and in the end you have to go with what looks best. My first army is Goblin, and because they are even smaller than Dwarfs I mostly went for or one or two models away from FMC.

I’m hoping PMC with some decent multibasing will give these guys a good look.

The first of the three Ironguard Regiments are in progress.