I’ll get some more and better pictures up later (as soon as I get to Oslo where the army is currently based) but this is my principal KoM army. The army is a (very) liberal fantasy take on a Scandinavian army set in the 13th century.

Quite heavily converted from Fireforge games and Perry models (and several others). 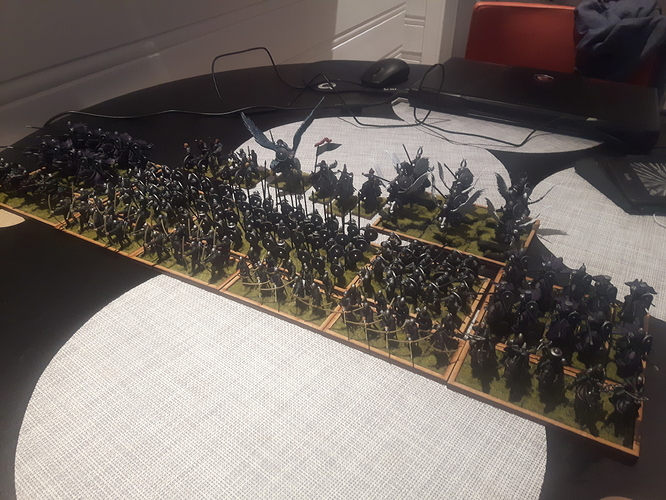 I’ll be looking forward to the better pics. Maybe try a less contrasty background to make it easier for the camera

I guess @Arctopithecus has a point, I think the white tablecloth gives it some unfortunate glare

Oh, I definitely will. This is just a quick picture I took a few months back with my phone. But as I said I will have to take them next time I am in Oslo as I have left that army with my brother who lives there (I currently live in Trondheim).

Hopefully I will eventuelly be able to put up some simple battle reports as well.

While not a new picture I realised that I had this lying around. 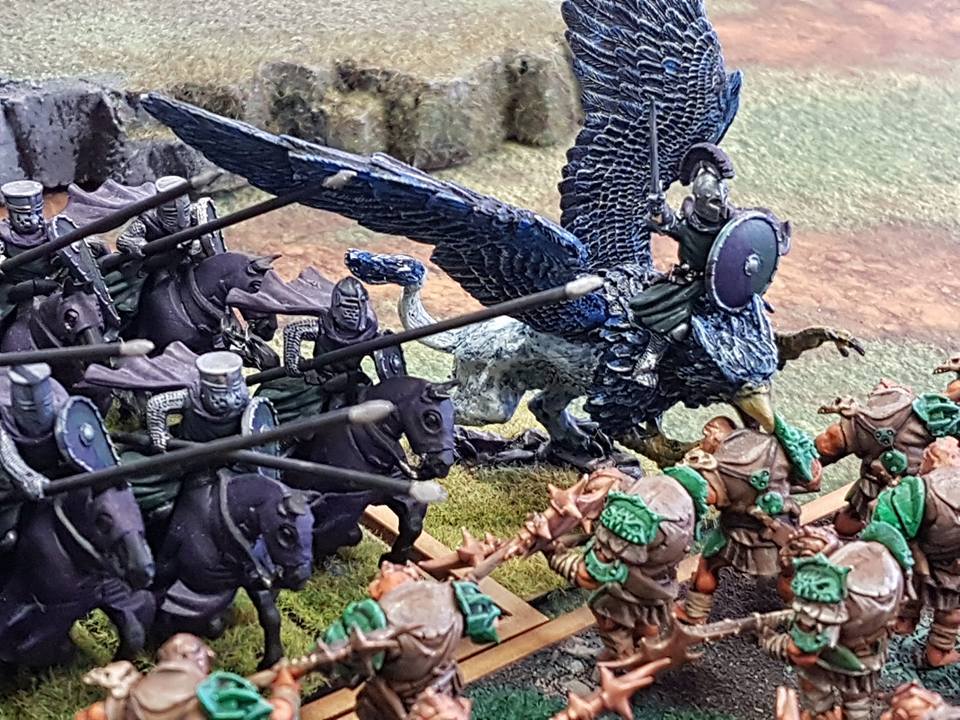 All credit to Fred who took the photo during a game we had a while back. This is right before a combo charge by the knights and General on winged beast break through the greataxe horde and make it into Fred’s back line. You can see general Gronmont’s griffon munching on one of the orcs (she knows that it’s important to eat your greens).

Since then I have cut down the knight lances and changed their arms to lamellar armour. The Fireforge knights have ridiculously long lances out of the box, and I think that lamellar fits the “medieval scandinavian” look I am going for.

I love the violet/Steel color pallet. Great job. I love that we can get so many themes in KoW. And that we can line our bases up if people dont want to rebase them on trays.

Thank you, the freedom to create the themes and armies that we want is certainly one of KoW’s biggest selling points for me. It has opened up so many hobby opportunites

Looks great! Id love to see more pics and hear about what models you used for the army and the color palette.
I love the purple uniforms. I recognize the Fireforge cavalry. What Perry/Fireforge models did you use for the infantry to convert them? The Archers, Spearmen, Polearms are ace!
Thanks for posting.

I should have replied earlier, sorry. This army is still in Oslo (and will probably stay there), so I won’t be able to post more pictures, but I can atleast explain what I have converted and how.

The pegasus knights use mostly fireforge teutonic knights parts, but the wings are GW Dark Eldar Scourges, and the round shields are from the Wargames Factory saxon weapon sprue that Warlord games sell. The kite shields on the knights are from the same sprue.

The knights are fireforge of course, and have now been converted to have shorter lances (the long ones looked a bit too long, and were a hassle to pack safely) and arms from the scandinavian infantry that Fireforge produces.

The longbowmen are Perry hundred years war longbowmen, and might look a bit too modern, but they mostly work.

The cannon crew are scandinavian infantry with some conversions to make them look crewlike, and the cannons are from Wargames Foundry.

The scout cavalry with crossbows are a mix of Fireforge mongolian horsemen, Perry minitures crossbows from the European Mercenary set, and scandinavian infantry heads.

The infantry are mostly fireforge scandinavians with some wargames foundry shields on the men with great axes. The spearmen have really long spears, that are Fireforge pikes that I have cut down a bit, they are still long enough to look like heavy pike, which is what I am using them for.

Finally the characters are a mix of Perry, fireforge, wargames factory, Northstar, and even a tiny Victrix part on the Griffon rider. The Griffon is Reaper Bones.

I promised to take some more pictures of this army, and I guess better late than never. 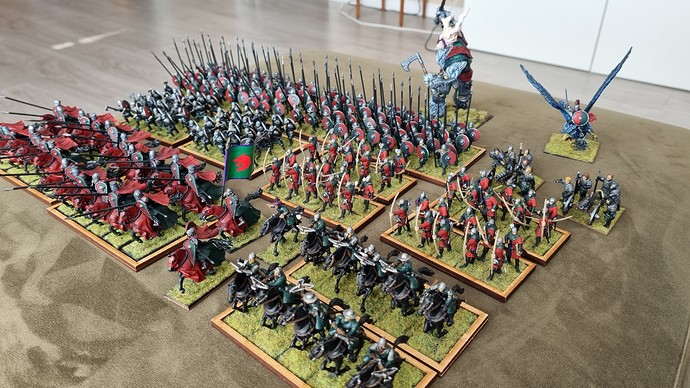 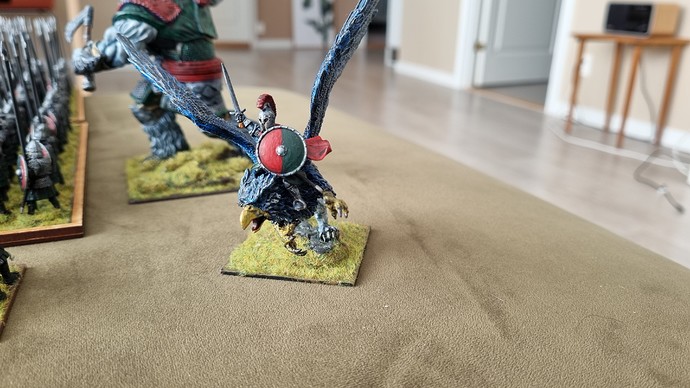 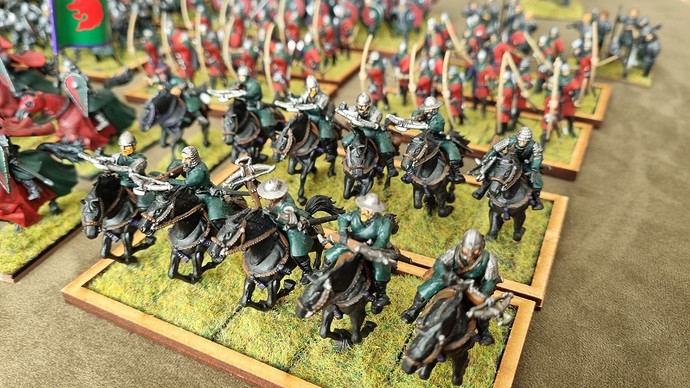 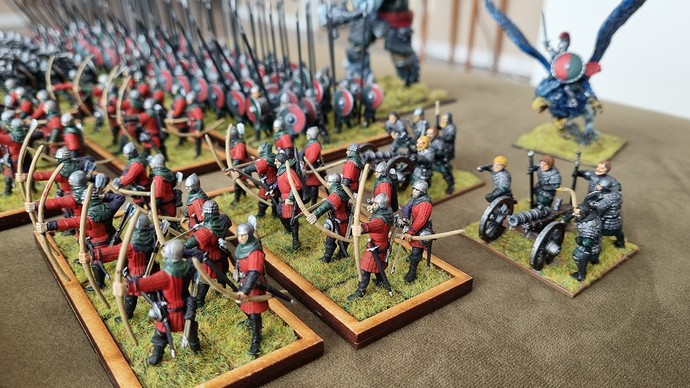 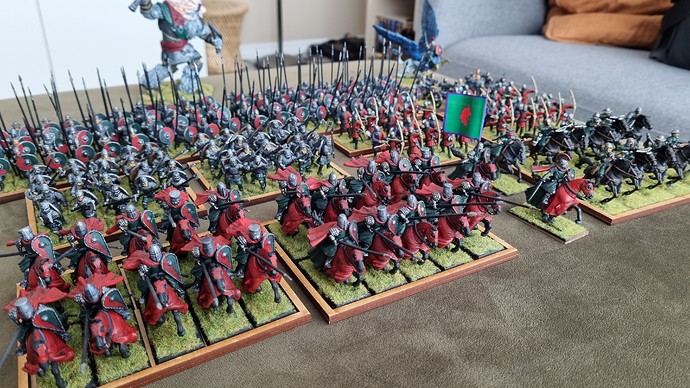 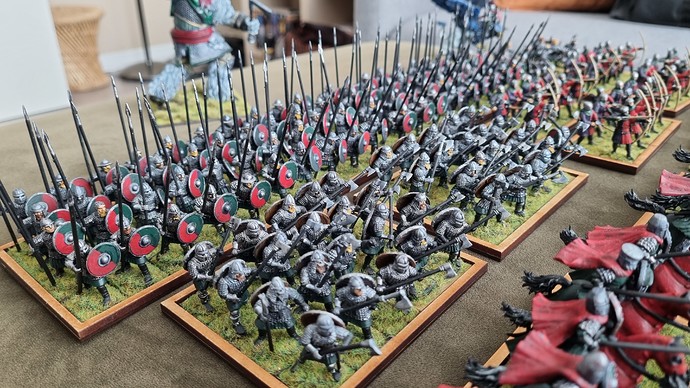 I consider this army done now. The painting is fairly simple and I am going for a very different scheme for my next KoW army, but on the whole I am happy with this. The Gronmont Free Company will be my go to KoW army and its background is firmly placed within Pannithor. On the few occasions I travel to tournaments or other events this will be the army I bring.