Hey folks, recently completed my 2000 pts (with some artefacts) Goblin army and figured I’d show it off. This is the first army I’ve ever completed after taking a 15 year or so break from hobby gaming. I never had the patience before to complete even a single unit, let alone a whole army, so this is kinda a big deal for me

The seed for this army was the Goblin figures out of Battle for Skulls pass, which I’d bought on a whim a long while back but never really got into. Kings of War was definitely a great motivator to get this finished, and I’ve tried to use Mantic models where possible as a bit of a thank you. 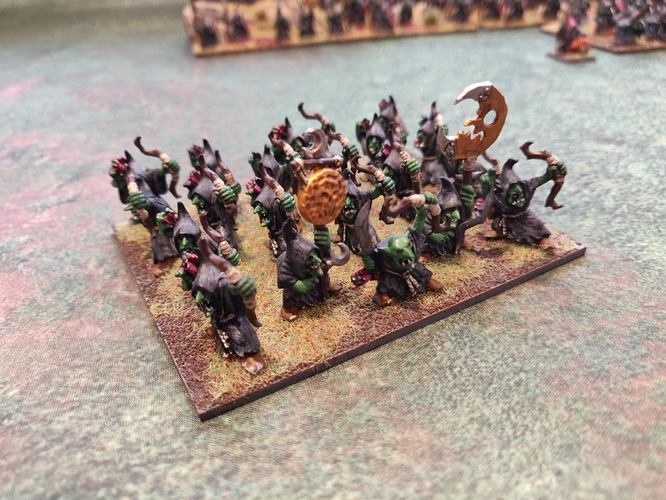 We’ll start with my Spitters regiment, which is the first unit I fully completed. These were largely painted after I got the original starter set using a GW paint tutorial which I don’t think exists anymore. It was a very detailed tutorial and I remember making slow progress, which might have put me off for a bit. The skin for certain looks better than some later efforts, but took much longer to do.

I did the finishing touches and multibased them after getting into KoW. It’s my first multibased unit so looks a bit flat, but hopefully you’ll see some improvements in the other units. As all the units were already painted this happens to be FMC. 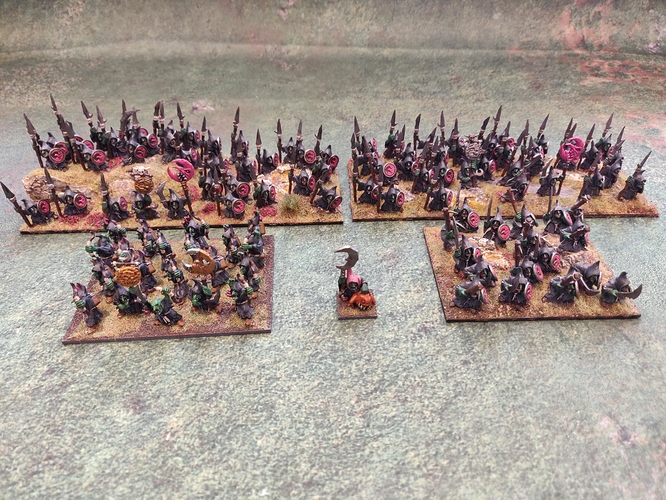 A wider look at some more of the Skulls Pass night goblins which combined make up my Infantry division. It features two Sharpsticks hordes, a Rabble regiment, the aforementioned Spitters regiment and is led by a Biggit.

You’ll hopefully see some improvements in the multibasing, which I picked up from the Lukes APS Kings of War basing video on YouTube. The Rabble is the only thing I’ve purchased from GW since they went AoS. I just needed a cheap extra unlock for a tournament, had heard bad things about the Mantic Goblin infantry and wanted them to match my other Night Goblins. I’m looking forward to seeing the new Mantic stuff when it comes out though. 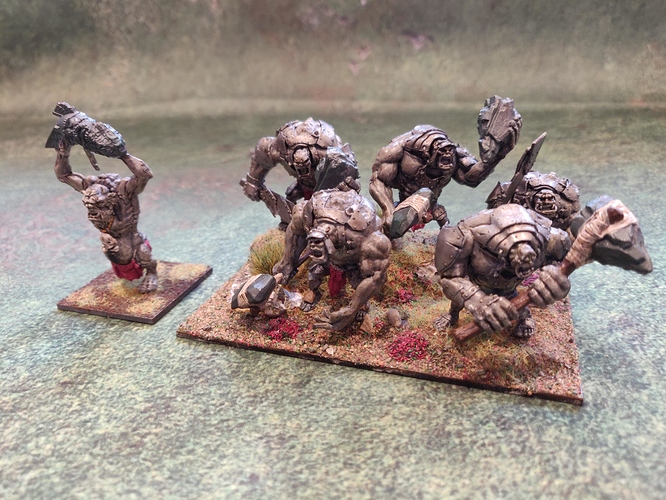 The Trolls give me a hammer option. A theme here is I kinda just bought Mantic models that I liked the look of and complemented my Skulls Pass models. The Troll Bruiser doesn’t make much sense by himself with Inspiring (Troll only), so I had to by some Trolls to inspire him! I started with a regiment but upgraded to a horde later on, and that meant they got a new base. I hve a sixth troll painted, but he didn’t fit on the base with the scenery. Definitely learnt a lesson there. 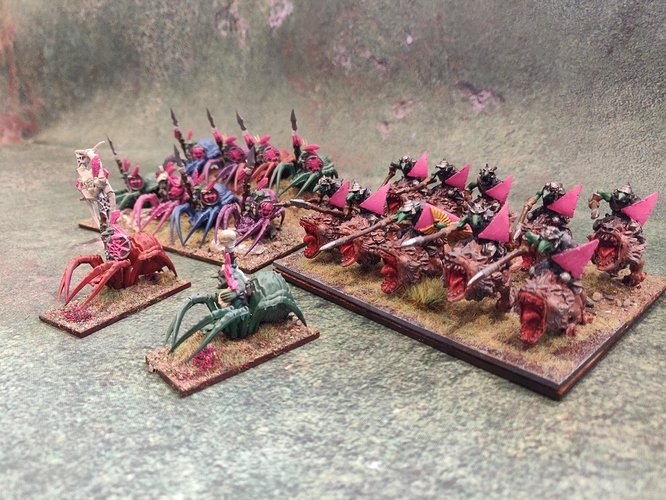 Cavalry comes in the form of Fleabag Riders. Again a mix of GW Skulls Pass and Mantic. I actually painted the Mantic wolves first, as I preferred the models over the quite static looking Spider Riders. The wolf regiment can be split into two FMC troops.

I played with magnetising the spear arms on the wolves so they can have spears up or couched, but it was a bit fiddly and I don’t think I’ll bother magnetising arms again. However I did magnetise the spider hero mounts and one mount from the spider regiment. This means I can have a any two mounted Biggit, Flaggit or Wiz heros, and use the spare model to “lead” the regiment. That’s useful. 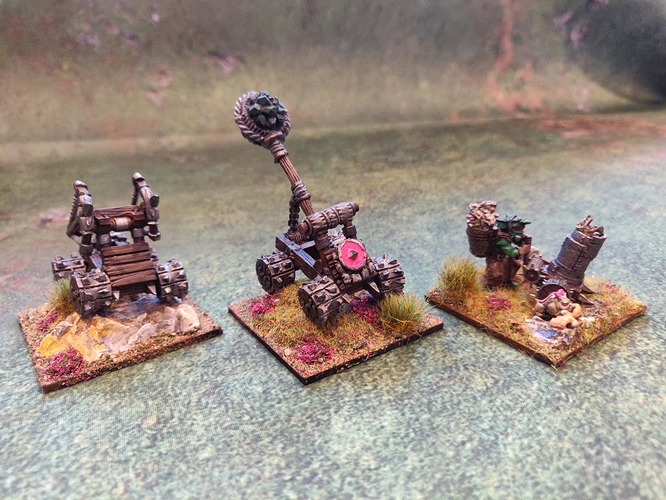 Artillery company. Fully Mantic here. I kinda just like buying one of each model I look the look of. It does give me options but doesn’t lend itself to building tournament lists. I could do Goblin warengine spam I suppose, but actually in my casual games they don’t seem to do too much good. Fun though. 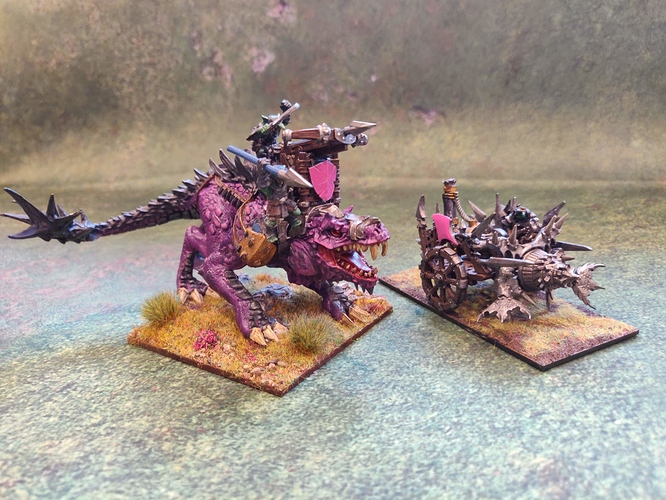 The Mincer was the first “vehicle” I’d painted, and the first time I’d used washes. Had a blast. I think it’s painting that model that I realised I was having fun paiting, rather than it being a means to an end.

Starting to paint the Slasher was quite terrifying. I considered doing some test paiting to work out a paint scheme, but got bored about 15 minutes into that and just started splashing Army Painter’s Orc Blood everywhere and going from there. I’m definitely happy with the end result, as this is the centre piece of my army. 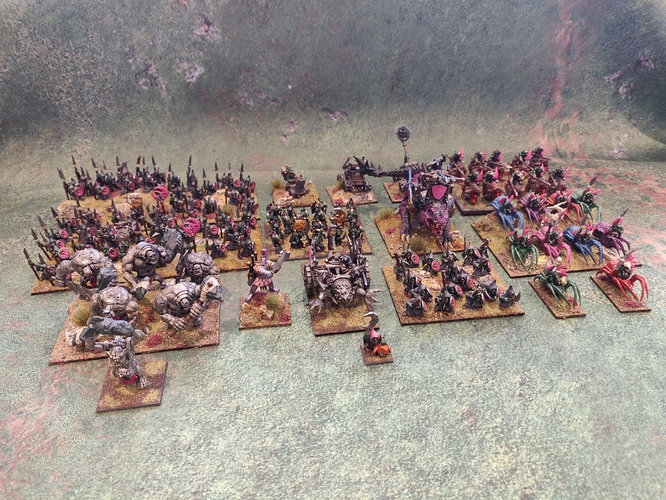 The entire Pink Moon clan in all its “glory”.

Bonus: I “won” this by coming third from last in the Stane of Blood I tournament in South London. I needed a large infantry hero to use as a special tournament specifc Reaper character in on of the Shroud of the Reaper tournaments, which is coming up. Now idea who made it though. It’s a lovely model and I’d love to find out… 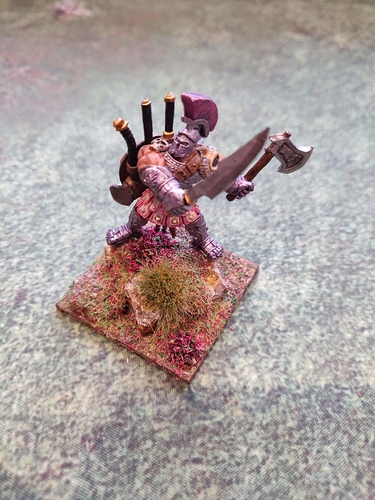 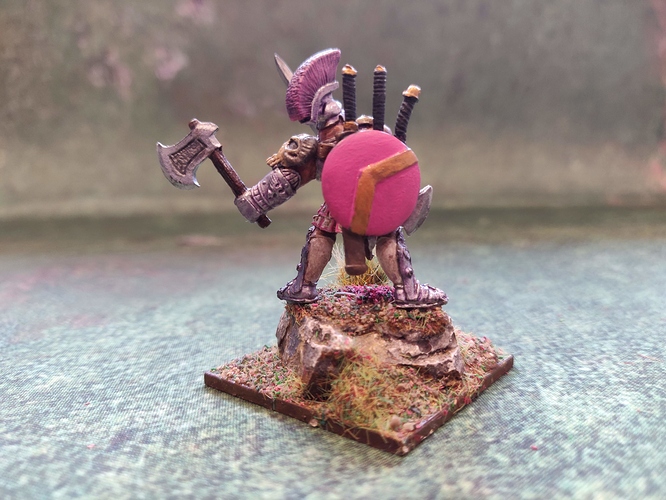 Obviously, pink detailing to fit with the Gobos!

Bit of a ramble that, but hopefuly you found it mildly interesting.

Great to see more goblins around, nice work. I’m resurrecting my own Skull pass goblins at the moment to be the heart of a goblin army,

Who doesn’t love goblins, and yours look great. I love your narrative as well, and I’m sure everyone’s army starts with what they think looks good. And then you realise they’re terrible in battle! I know that’s how my armies are developing…