i thought i’d better start posting my progress on this project in a seperate post rather than blocking up the January Painting post , but i wasn’t sure where work in progress posts go, so apologies if its in the wrong spot.
The base has come a long way from the cardboard box and coffee stirrer deck stage, but is not yet finished. However, i’ll need to put in the gobli pirates before i finish the rigging.
My initial plan was a horde of rabble goblins, but then i added an extension to bring it up to Legion… This was more about asthetics that tactics as i wanted more water on the base. but even tactically, a legion is hardly more difficult to maneouver that a horde.
In the end, i loved the bigger base so much, i stuck the smaller one down permanantly. Next is adding pirates, some of which are swimming/drowning in the water, others desperately clinging to the shore, or getting fished out in a net.
At this point, i have given the pirates a rough painting and a wash to capture details, but they will need touching up, maybe a light dry brushing too,
I’m aiming for a garish colour but not too bright. i’ll see once the wash dries. 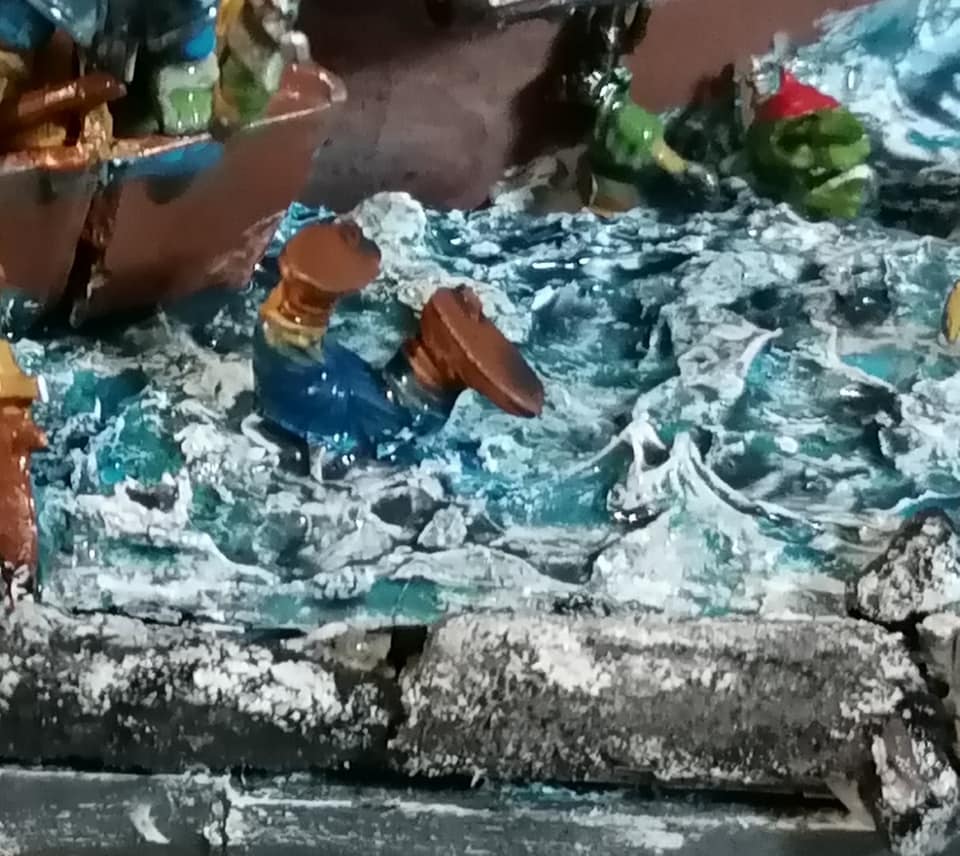 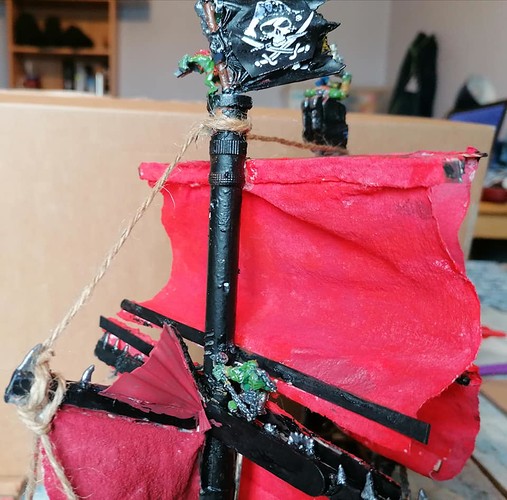 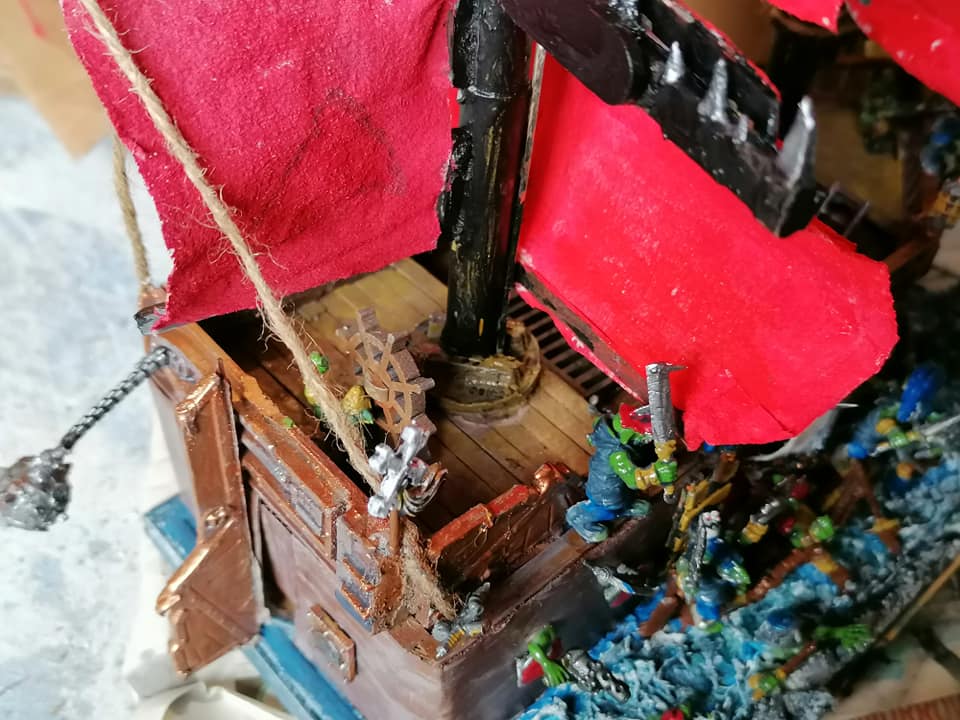 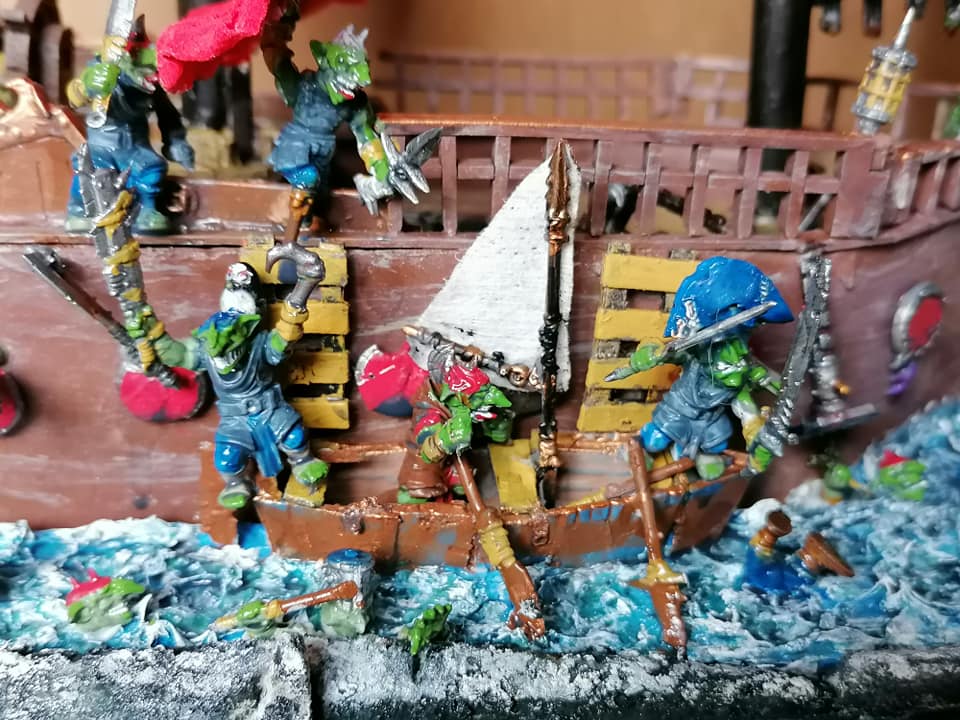 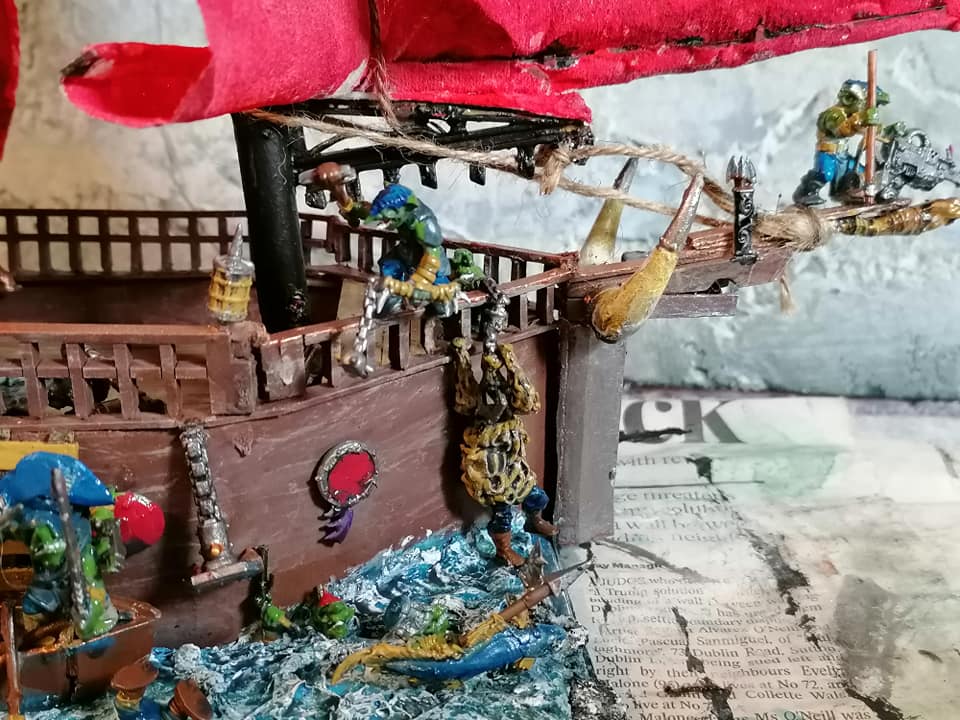 still a lot of deck to fill 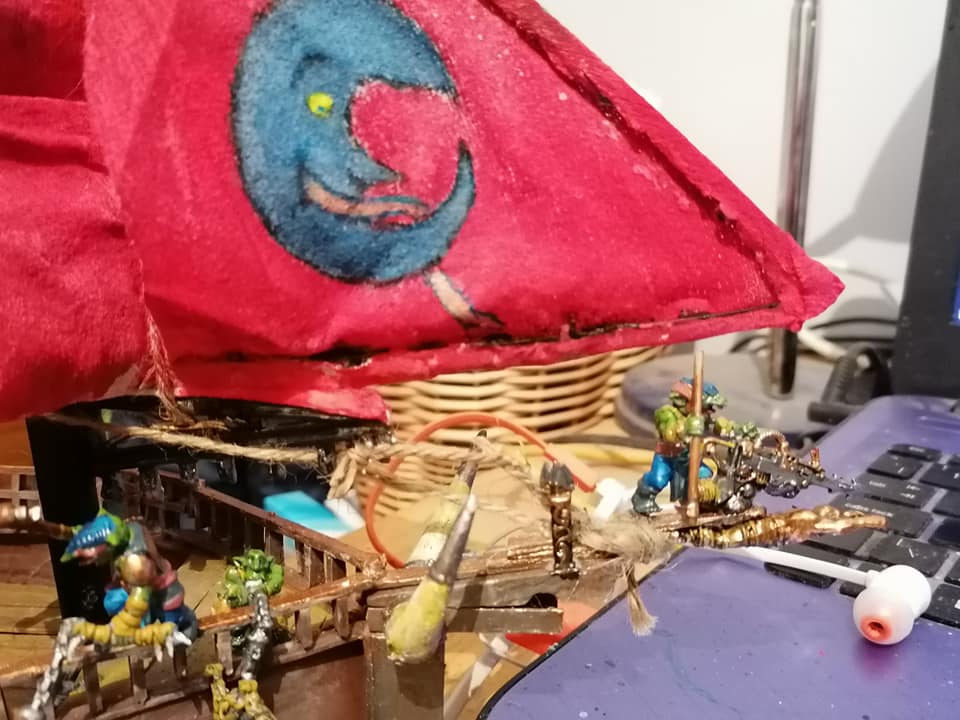 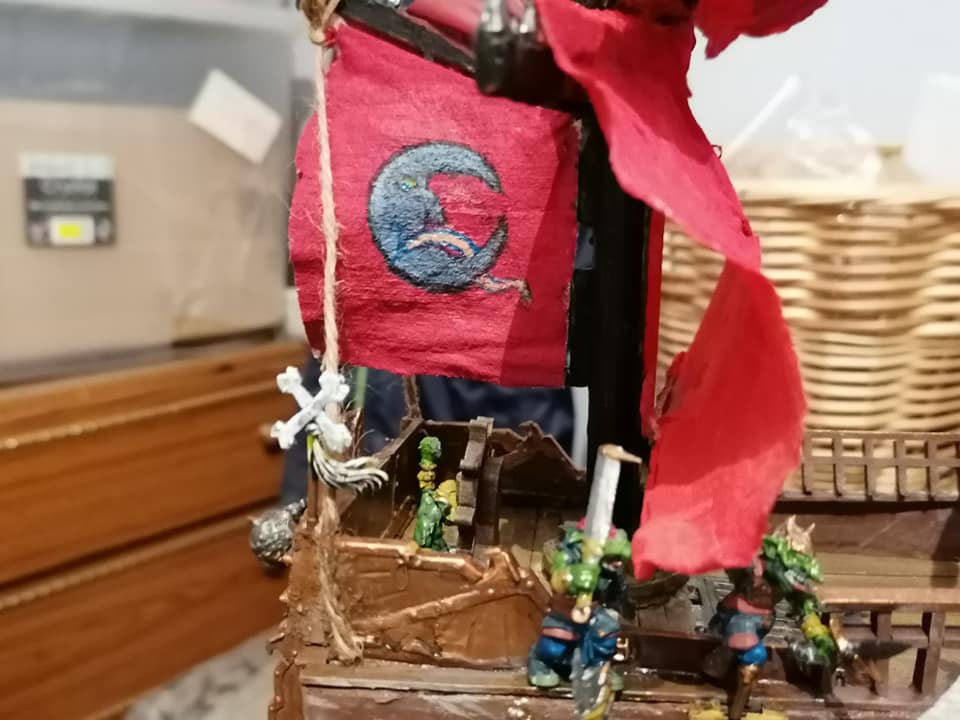 That is some funny stuff indeed

Many thanks @FredOslow. i’m having a lot of fun in the process. 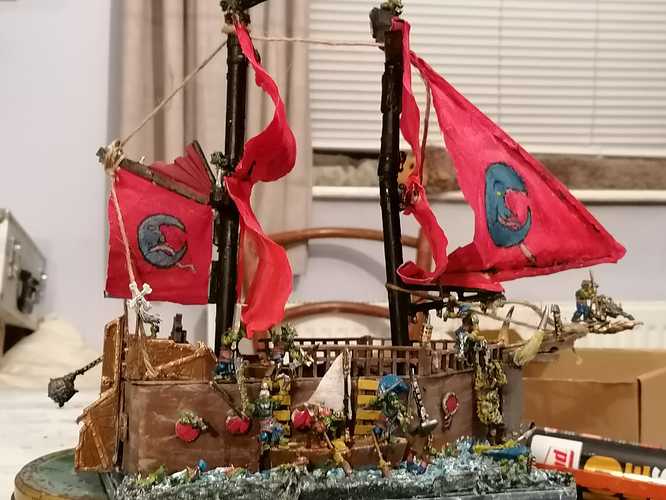 after touching up a bit, painting the aft sail with the moon logo, and painting belts, metalwork etc. 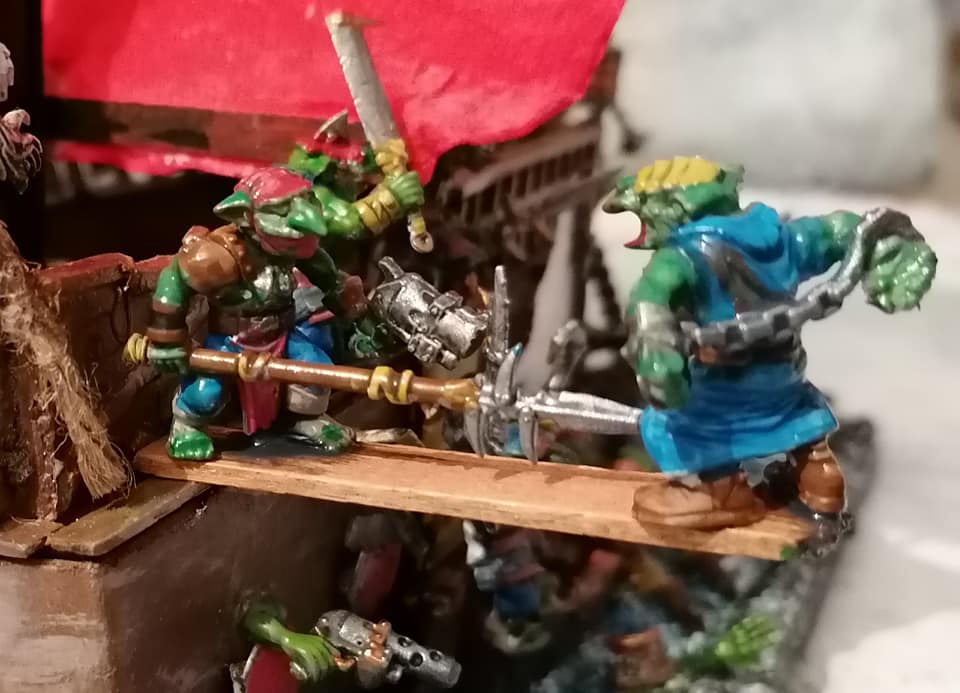 It wouldn’t be a pirate ship if someone wasn’t being made to walk the plank hehehe Luckily, the plank was just long enough for the prisoner to teeter on the precipice
However… I amtempted to replace the prisoner with a human/elf/dwarf or even a female halfling warrioress. Any preferences anyone?

The Ship’s Krew …so far: -
7 goblins swimmming/drowning
1 diving into the sea
1 being fished out in a net
1 hauling up the net,
1 krewman manning the life boat
1 Ship’s Kaptain in the life boat
1 hook-handed Bow’sun and his parrot (penguin) in life boat
3 waving weapons from the portholes
1 trying to get out of the hold
3 on the rails, including one with wooden leg,
1 prisoner walking the plank, Da Victim
1 urging the plank walker on… Da ‘motivator’
1 swinging from a rope like a demented apeman (hanging by his hooked hand)
1 steering the ship, (Da 'elmsman)
1 harpoonist (Sharpstick thrower crew)
1 reefing an aft sail
1 in the krows nest
1 orcling (Da Kabin boy) with his binoculars in the other krows nest

I vote for an elven prisoner

hehehe a good choice. i also have some ratkin bodies, old skaven, but i fear the heads are long gone.

Now with a motley Kru of villains , outcasts and guttersnipes, including 40 I think… i keep losing count…Rabble pirate goblinz, an orcling cabin boy, and a Biggit Kaptain with a Boomstick to keep them in order, the craft is starting to look shipshape, although it still hasn’t got a name yet. Any ideas?
There is still space for another 10 goblinz at a squeeze 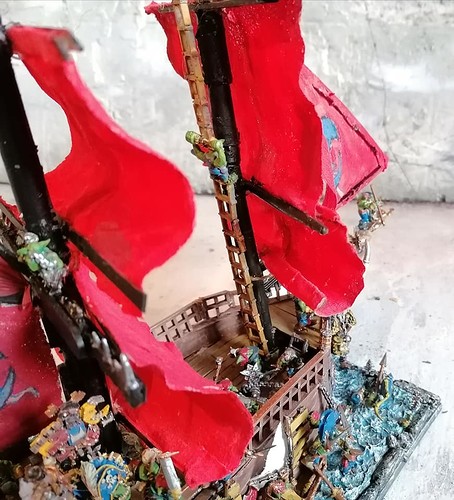 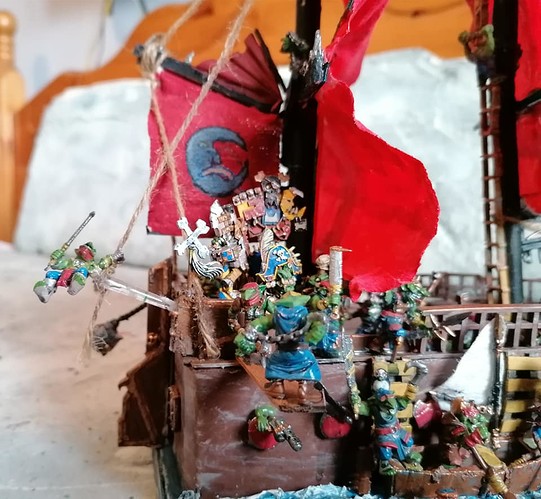 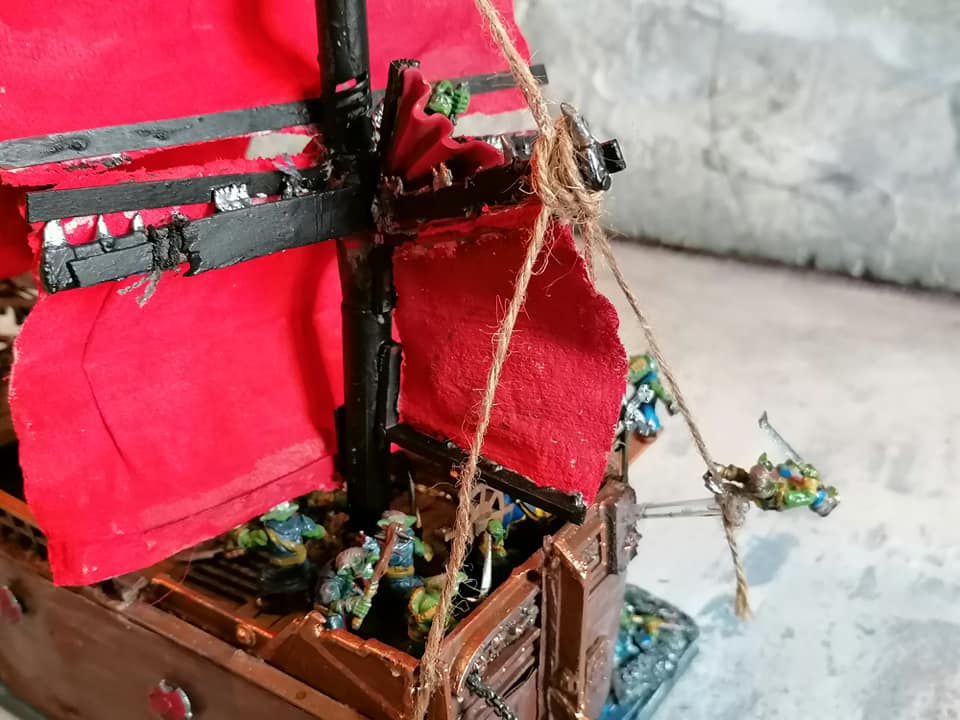 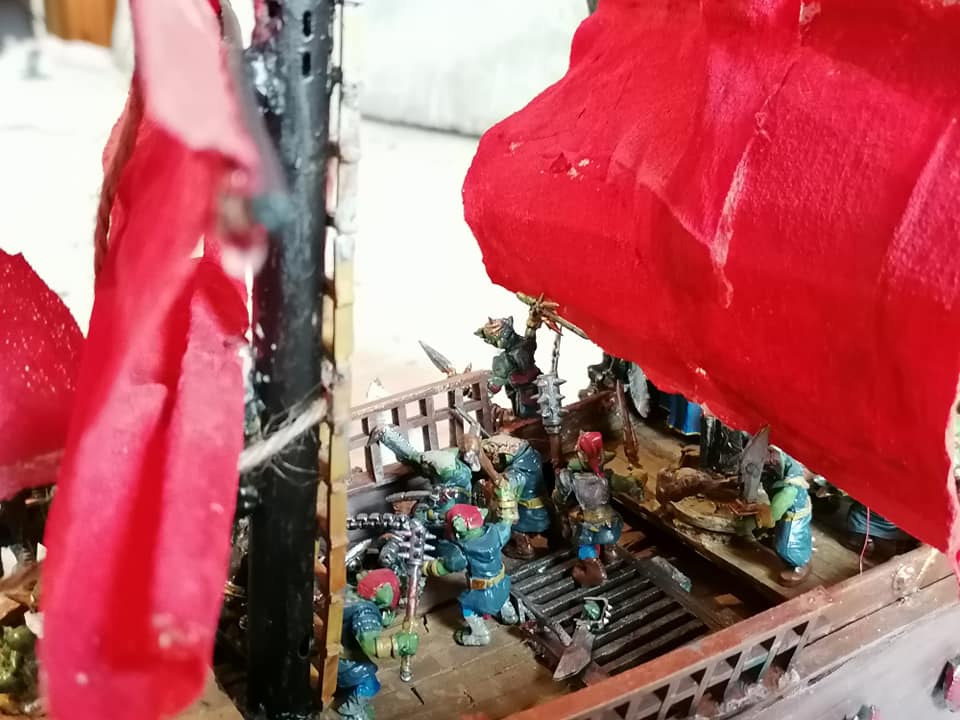 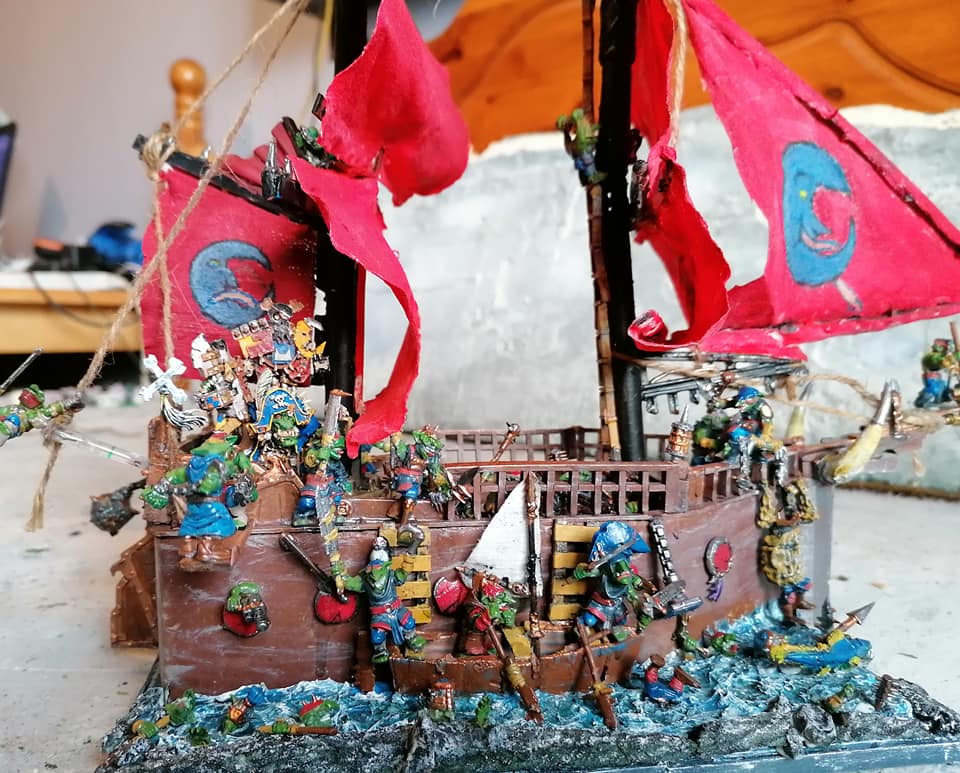 Glued my fingers together and to the rigging trying to get the Jacob ladder made but finally got it finished
Thankfully I got myself free, and didn’t have to get my wife to rescue me … that’d be embarrassing hehehe 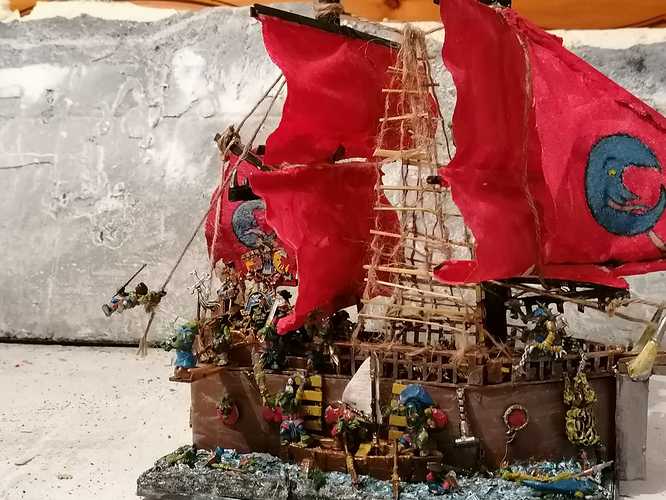 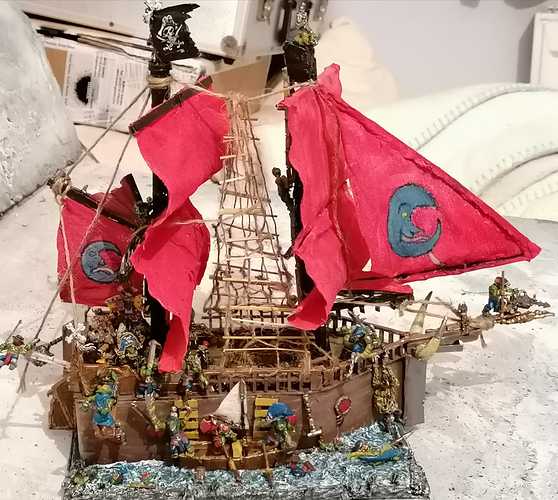 I love the ship so much!

The SS Fly-Agarixz:- A Legion of Goblin Rabble pirates. I’ll throw a few more Goblins at in when I get the last batch painted, but it’s pretty much finished now. The spotted sails should tie the unit in with the rest of my Goblin army host. Thanks to everyone for all the positive feedback along the way… it’s kept me motivated when I was getting painting lag. 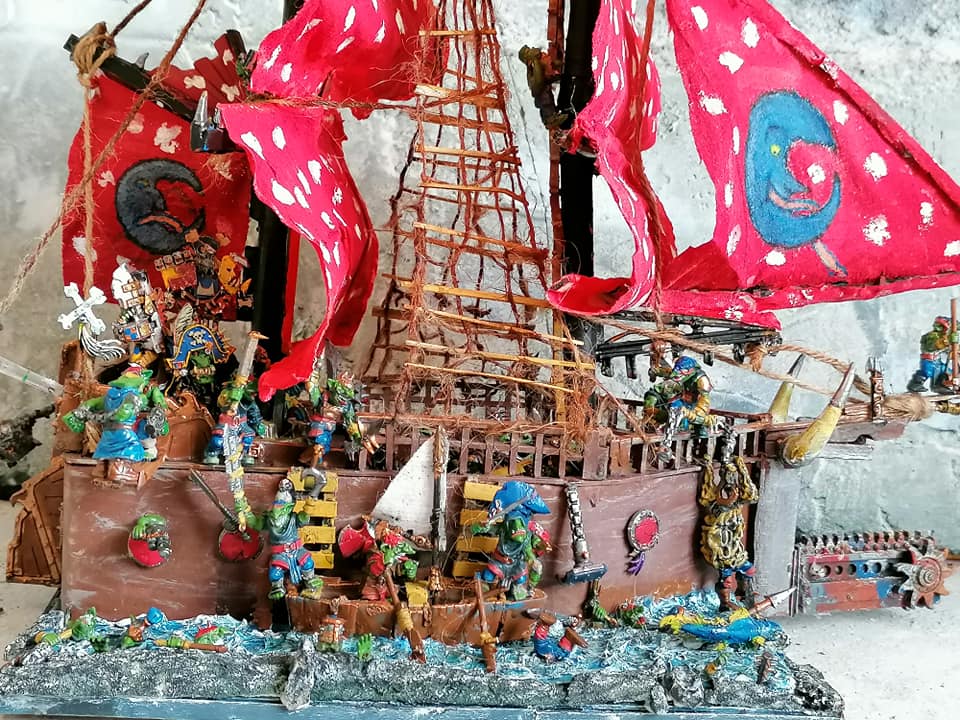 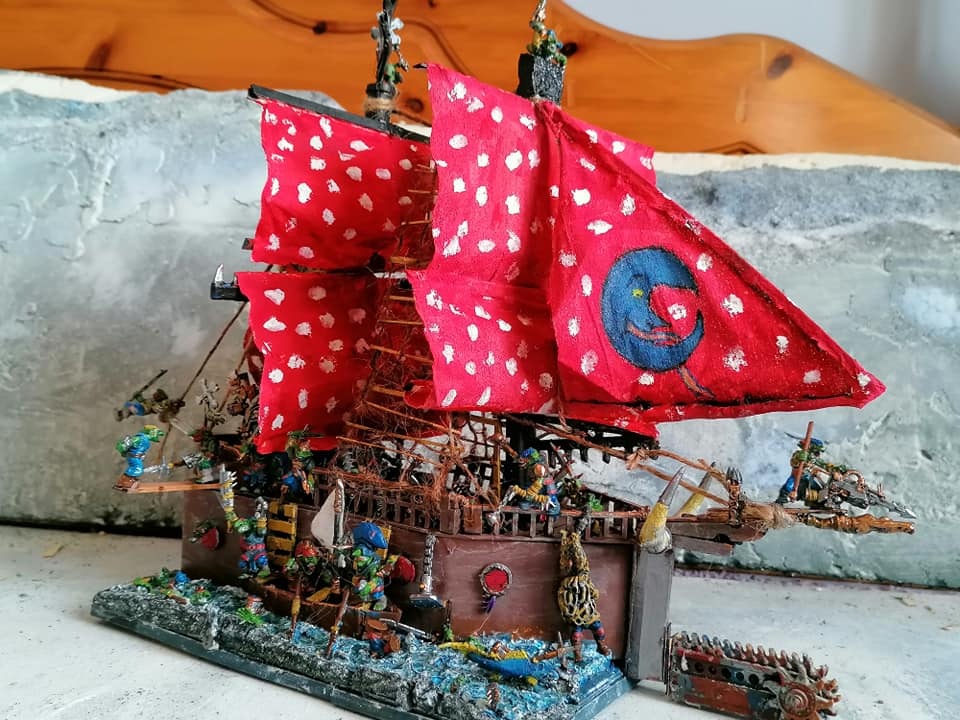 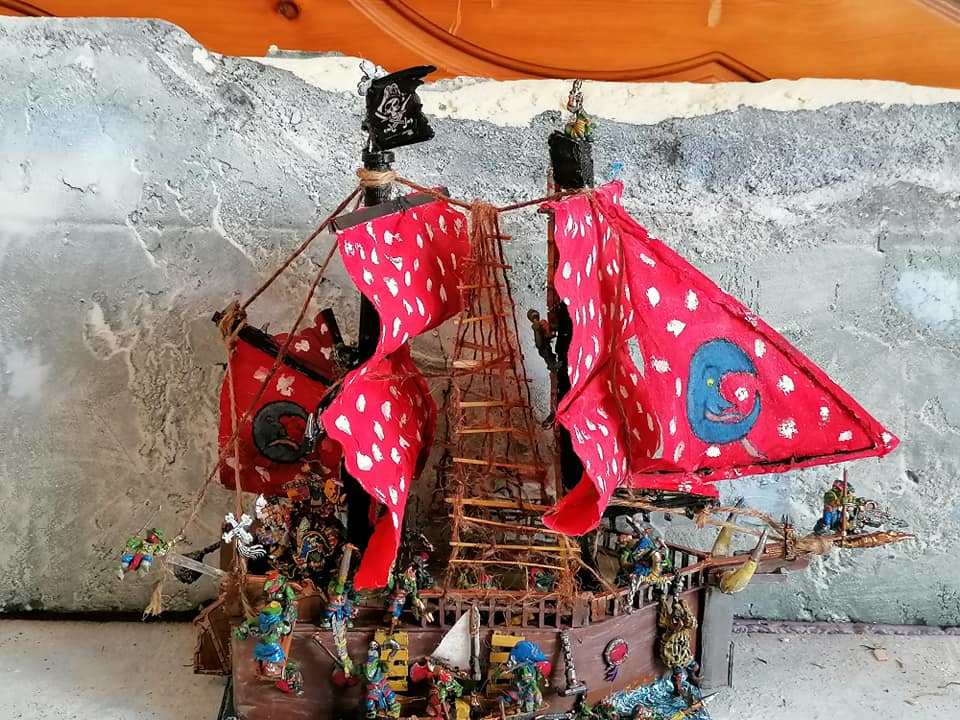 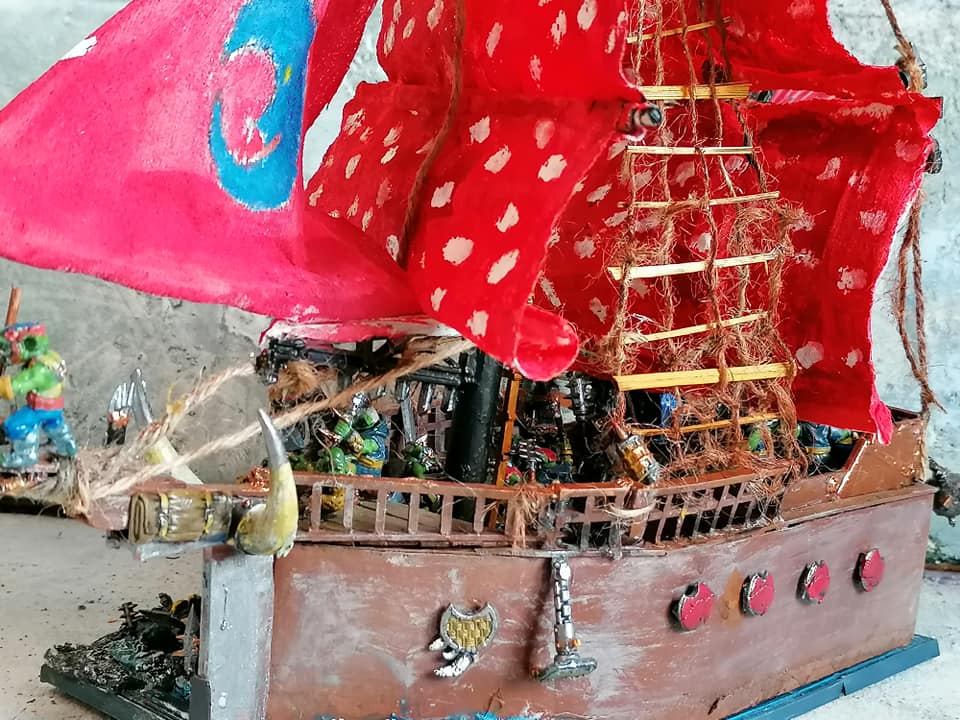