Very impressed with the latest efforts of the team behind the KoW TTS mod, I decided to give it a shot with a local player. He’d played some other games in TTS, and I’d fiddled with the KoW mod a bit, so between the two of us we had a pretty easy time figuring things out - we got all set up and played a full game in just under three hours, not bad at all for a couple of rusty players in a new environment!

I took screenshots (way less consistently than I thought) to make up a little battle report, so here it is! First up, lists - on the bottom is my Salamanders:

Opposed by my opponent’s Empire of Dust, which looked something like this:

I’m afraid I could not say where the remaining 70 points went - you’ll have to use your imagination.

We played Salt the Earth, though you’d hardly know it. My opponent won first turn, and after deployment and turn one (which I completely forgot to screenshot, the table looked like this: 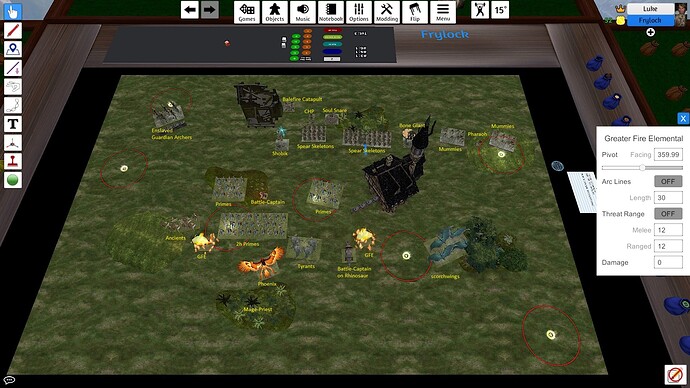 As usual, I’d scouted then moved very aggressively with the Primes in the formation, happy to offer them up as the start of a trade. Knowing he had superior firepower, my opponent was happy to sit back and let me engage on him, and his first turn shooting did an impressive five wounds to my left Greater Fire Elemental and seven to my Tyrants, though the Phoenix managed to completely heal the GFE. Meanwhile, my Scorchwings plinked a very respectable 3 points onto his Bone Giant. 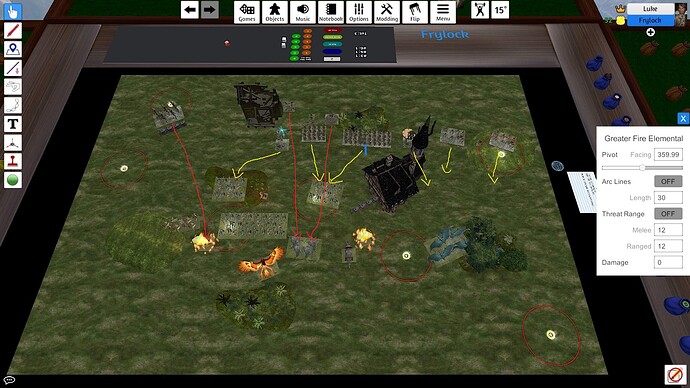 2 - top of 3 annotated1920×1080 719 KB
Turn 3, my opponent struck, happy to block up my front line with his. Shobik did 5 wounds to the left Prime regiment, while both skeleton units only managed 3 to the right unit, but nailed an 11 for the waver! Meanwhile, his shooting put a few points of damage back on the GFE and brought the Tyrants up to 11 wounds, but he couldn’t manage the break. His heavy right flank advanced… 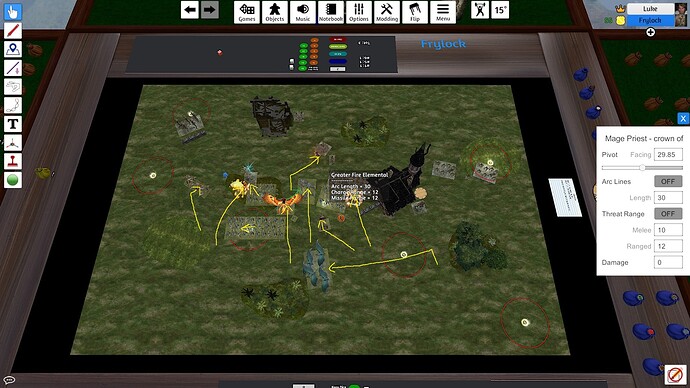 3 - bot of 3 annotated1920×1080 684 KB
So naturally I ran away with my Scorchwings. I would have liked to just fly over the mummies, but it would have landed me well in range of a surge charge. From left to right, my Ancient troop moved up to threaten, the GFE and Primes went into Shobik, doing 6-ish wounds, the Phoenix popped up to heal everyone (bringing the Tyrants down to 8 wounds), the Battle-Captain (now in range of the GFE’s WC aura) charged the Soul Snare, the Tyrants charged and destroyed the Skeleton Spearmen regiment, and the other GFE went into the Spear horde. 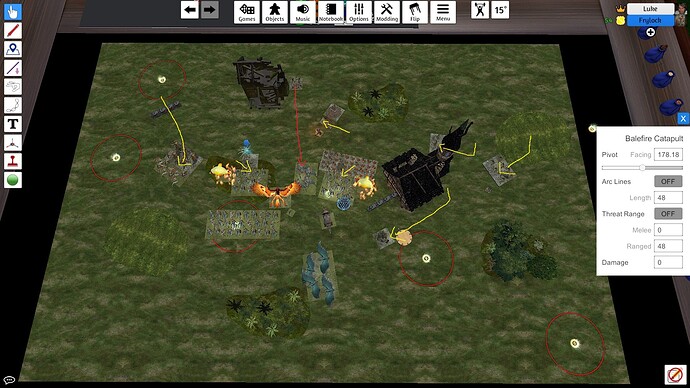 4 - top of 4 annotated1920×1080 777 KB
My opponent, wanting to protect Shobik’s flanks, charged his Enslaved Guardian Archers into my Ancients, but flubbed the roll and only did 1 wound. Shobik countercharged the Primes, hoping for a break and reform, but couldn’t quite managed it, while he relied on his Catapult to rout my Tyrants: two misses. He cleverly used his Cursed High Priest to block my Battle-Captain’s LoS to his Soul Snare, buying it another turn, and kept grinding his Spear horde into my Primes. On the right flank, his Bone Giant moved up and got a surge scoot to be in a much more threatening position. 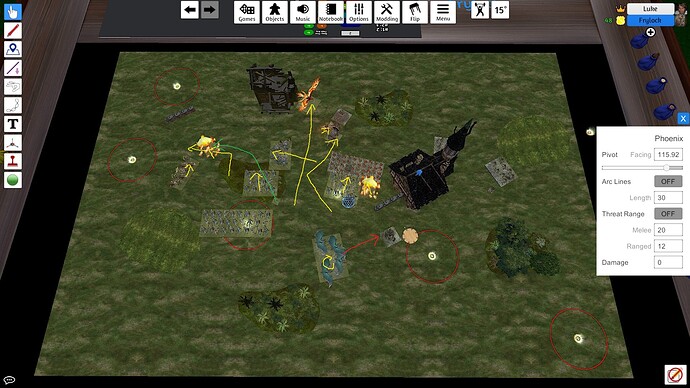 5 - bot of 4 annotated1920×1080 749 KB
My turn 4 was very lethal. The left GFE managed to walk behind the Enslaved Guardian Archers and get a surge into combat, while the stubbornly still alive Tyrants flanked Shobik - even hindered into De6, 60 attacks brought him down. The Battle-Captain on Rhinosaur managed to squeak around the frontline and join his comrade on foot to fight the Cursed High Priest, but they couldn’t bring it down. Similarly, the GFE and Primes kept grinding the Skeleton Spear horde, and the Scorchwings turned to shoot the Bone Giant, knowing it had plenty of good targets. The Phoenix charged the exposed Balefire Catapult, killing it. 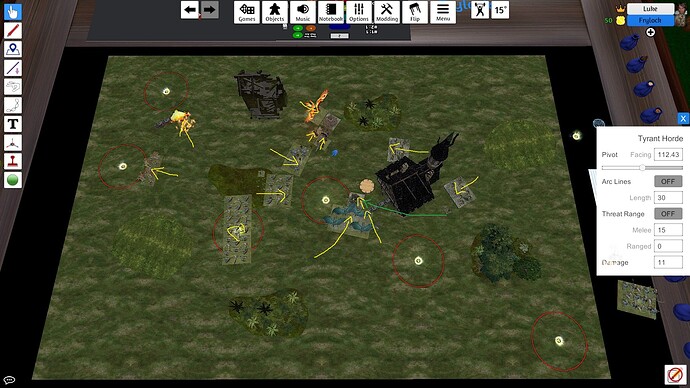 6 - turn 51920×1080 747 KB
Turn 5, my opponent surged his Bone Giant into my GFE’s rear, killing it handily, and prepares mummies to join the fight. I start dashing for objectives, and charge my Scorchwings into his Bone Giant while getting my clustered middle sorted out. 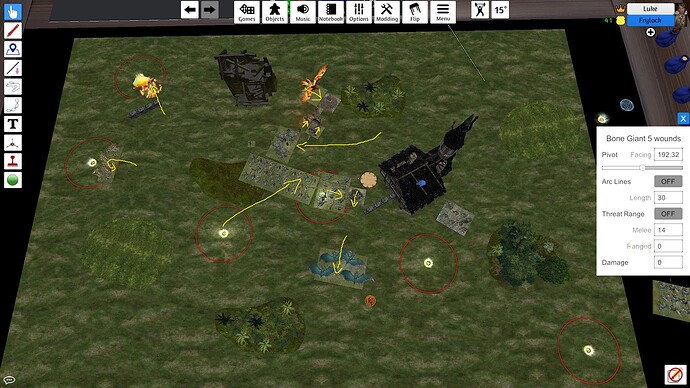 7 - turn 61920×1080 825 KB
Another combined picture, my opponent’s Bone Giant wavers the Scorchwings that charged it, and he nails a 7" surge (on 14 dice) into my Tyrants, bringing them up to 16 wounds and then rolling the game’s first double one! Absolutely tragic. I follow up with a flank charge from the 2h Prime horde, which picks up the mummies, and I continue to slowly wear down his Cursed High Priest, Soul Snare, and Bone Giant. We roll for turn 7, and get it! 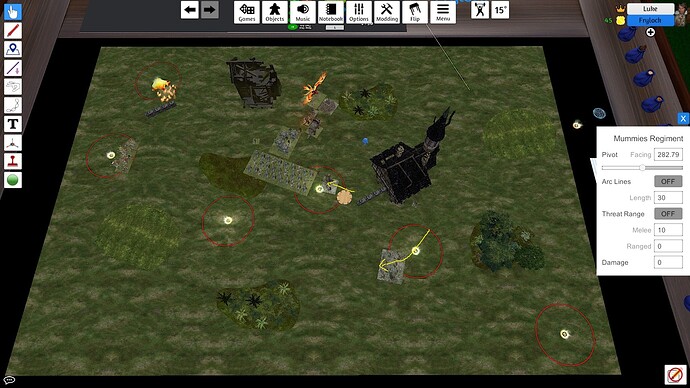 8 - top of 71920×1080 746 KB
My opponent surges his remaining Mummies in to finish off my Scorchwings, and cuts down the surviving Prime regiment with the Bone Giant, but everything else is a disordered spellcaster. 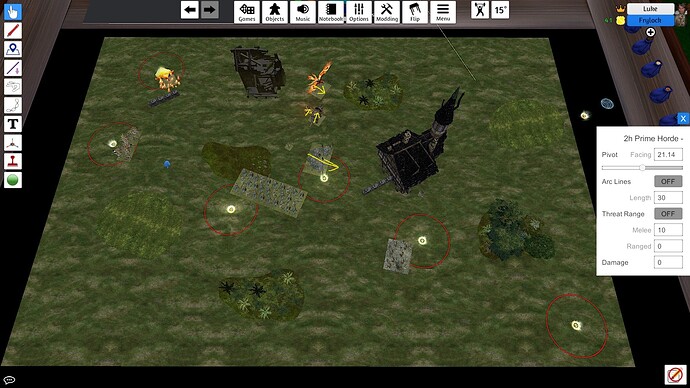 Overall, very pleased with Tabletop Simulator! There were a couple minor physics glitches with hills and tokens, and it doesn’t have UB’s event log so it would be easier to cheat, but I vastly prefer the play experience. The dice roller is quick and easy, moving and pivoting handles well, and measuring especially is super quick. I’ll definitely be looking for more TTS games as we weather this latest plague wave.

Let’s close out with some drama shots! 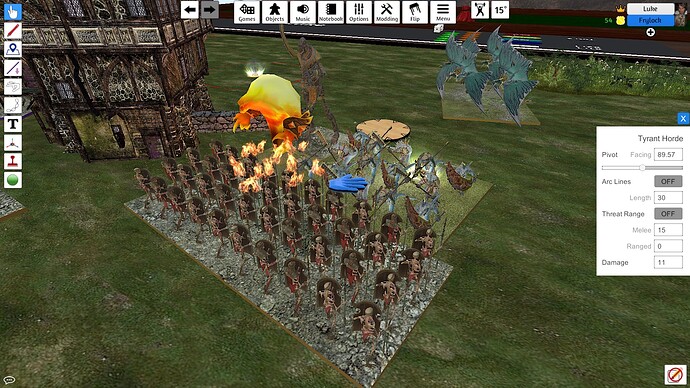 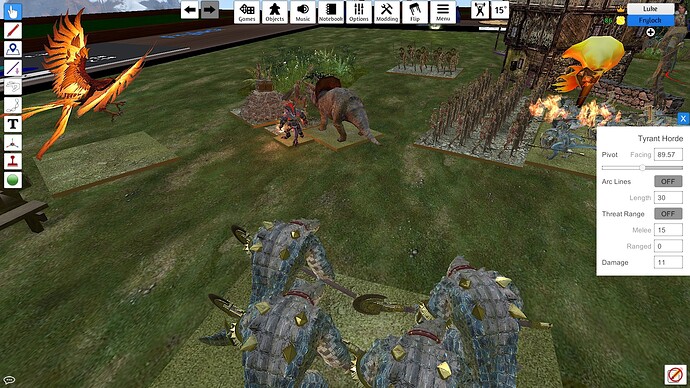 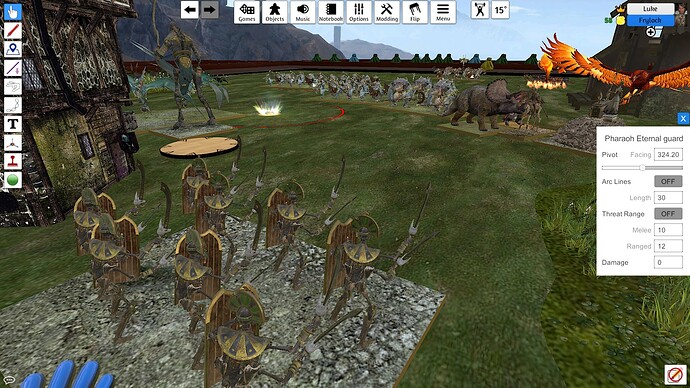 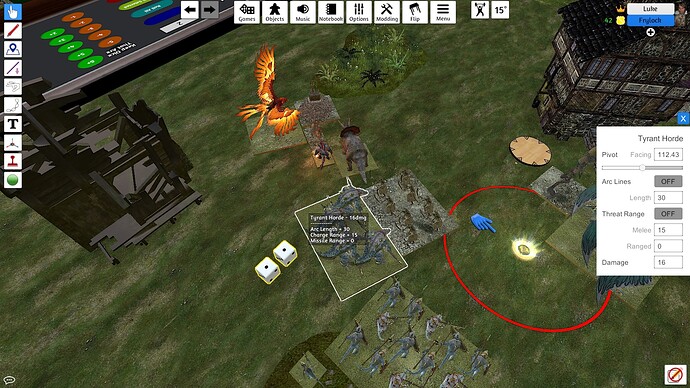 Great report. How do you think the interface compares to UB?

Thanks for the report! Glad TTS is working out for y’all. I personally don’t enjoy it because it’s a simulation of the experience of playing a tabletop game, not a simulation of the game itself (like UB), so it just makes me miss the physical interaction of the tabletop all the more (I’m a very ‘feel of the dice’ sort of kinetic gamer), but that doesn’t mean it doesn’t totally work for others. The mod is certainly looking good!

A bit better I’d say, but it really all comes down to familiarity. TTS is a more robust program, so you can assign hotkeys to your heart’s content, and I prefer the system of bags to UB’s little menus, but it mostly comes down to aesthetics.