Tom Annis posted a list yesterday that I will be building ASAP!

It looked OK at first but seemed light on drops and US. The more I looked, the better the survivability looked. It’s not how many you start with. It’s who’s left at the end.

It’s a concept that I’d like to see played. Your offensive power is huge between the four regiment-hammers and four individual vampires. That said, it’s got some serious liabilities.

You’re very vulnerable to shooting. Even a wound or two can reliably waver a troop of ghouls; so any army that contains some shooting may take out the chaff before the vampires can take out the shooting. After that it becomes a grind match; can you destroy enough of the enemy army befour your vampires (of all kinds) are overwhelmed?

Of course your vampires are high defense/high nerve, but consider a goblin army (that I’m pondering right now) consisting of hordes of cheap bodies supported by a 2nd wave of luggits, trolls and as many no-cover war machines as I can include. I think I can reliably destroy at least one or two of your heavy hitters before they hit my lines and will your individuals plus two hammers chew through my army in time?

EDIT: Created an army list to show in which directions I’m looking: 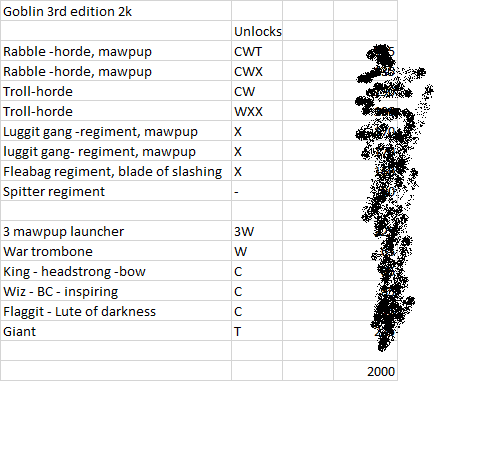 (points again blacked out. Totaling 2k)
as for unlocks: The upper half provides unlocks, the 2nd half uses them. An “x” indicates an unused unlock.

I play ratkin fairly often, so the vulnerability to being swarmed will show up quickly. I’m wondering if breaking through a flank with all that mounted speed will destroy plans after contact.