Really looking forward to doing a few battle reports for this one.

a good stroll down memory lane, and great review,

Nice review. That’s made me so nostalgic. I’ve got that rule book kicking around somewhere too. You’ve made me want to dig it out and have a read. Frightening that it’s 22 years old. I’ll have to see if I can find my 1st and 2nd editions too, see what changed over the years. I’ll report back!

Found most of them (2nd edition is missing a book)
My god the rules are complicated and surely can only be used for skirmish games? I didn’t realise KOW was so easy to play!? 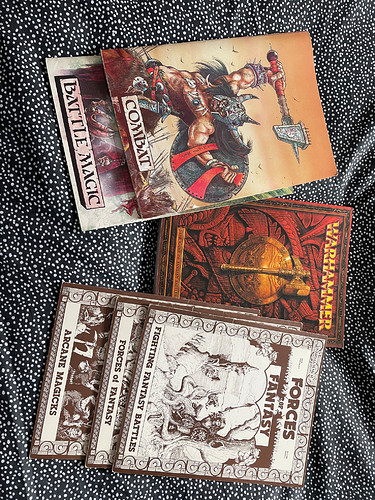 I liked WFB in my teens.

I used to have that Mage on Dragon, usually flanked by 2 other Dragons with Mages or Lords, that used the spell “Purple Sun” to destroy entire armies of my opponents all the time. (We usually played 3v3, large battles.) … and I used that Magic item that ensured I pretty much always got that spell too, at least on one of my mages.

I was having fun … not sure how much fun my opponents had frankly. But I was 13-16 and didn’t care at that time …

That’s my impression of WFB in retrospect. Potentially lots of fun with friends, but horribly broken at the same time.

It was a system that had the capacity to be utterly broken and offer your opponent no fun at all.

This is why I think playing with Ravening Hordes is how to enjoy the game. The issues came about due to ludicrously broken army books.

That’s always been the thing with any GW game. If you have 4 blokes in a garage with beards as long as their dwarf models you’ll have a good time. Each slowly buys new units to counter their opponents new purchases and anything too bad gets shelved because it’s clearly busted. As soon as you take it outside of the gentleman’s agreement of the garage meta you bust it so bad it’s all down to first turn roll off.

Some games have become big enough to carry shops on their own because GW keeps doing this and always annoys more and more players. 8th ed 40k rolled everything back again, rebalanced it then shortly after released a broken model that went in half the games factions with a hefty price tag… It’s why I always look for clubs or shops with a healthy alternative games scene (like KoW), rarely do you get the same issues and when you do they get a swift errata or the next book releases a couple of good counters.

There is a modern revival of old D&D style games where they take the old rules, rewrite them to be clearer and expand on them with new expansion books. If enough people wanted it there is no reason this couldn’t be done with older Warhammer editions. Horde armies can go back to being 60 models instead of 60 per unit! It could be called battle axe or something suitable for making terrible jokes around.