What i Did at Southwest Clash

The tournaments are now coming thick and fast in the UK. Two weeks after the Southern Crown at Tabletop Republic in High Wickham, it was time for SouthWest Clash at BIG in Bristol. This was to be a 2,300 point, 5 game tournament.

Following the success of my Goblins at the Southern Crown, I was sitting at the top of the Goblin faction for Masters’ qualification. As I was already Top Gob, I decided to run a different faction in Bristol and went for Order of the Green Lady. Now, the Green Lady is meant to represent the balance between good and evil, but she always seems to be on the side of good. So, I decided my army would represent the evil side of her nature and this were born the Order of the Dark Green Lady.

I play tested lists against Moonraker Andy and the Fox, beating Andy but losing to the Fox – “Just as well that Andy is going to the event and Paul isn’t,” I thought. Spoiler alert, what a silly thought.

I ended up with a small but beautifully formed list with: 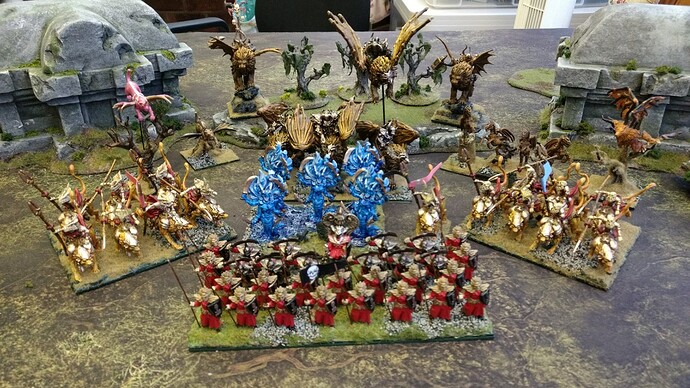 With the Green Lady’s Sacred Water in mind, I prepared gift packs for all of my opponents containing a Moonraker trophy and a bottle of afore-mentioned Sacred Water, in the form of dark rum. Make that Very Sacred Water. 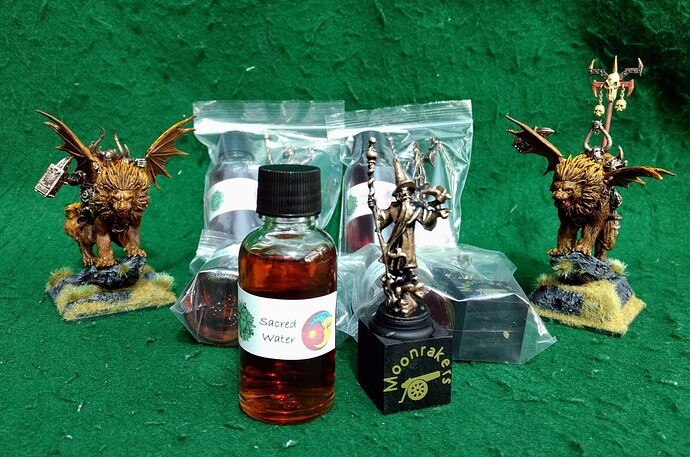 For various reasons, we had to use the mini MoonMobile this weekend and it was a struggle to fit everything in, but we finally managed to wedge Andy’s display board on top of our armies and we were off. 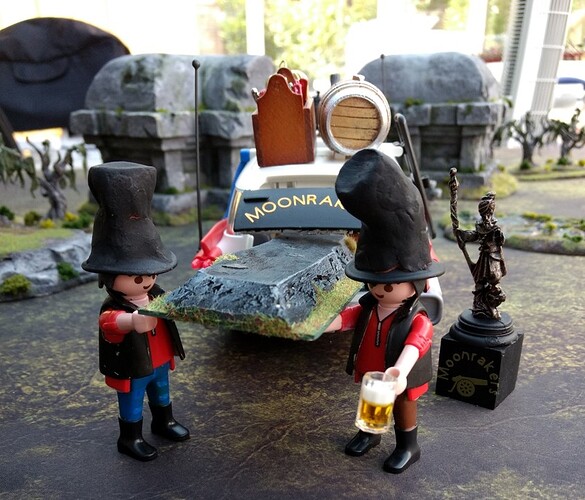 It was great to meet up with many old friends, including some that we had not seen for a long time, amongst them acclaimed fantasy author Rich Massie, a disciple of the Fox, with his army of Earth Elementals. 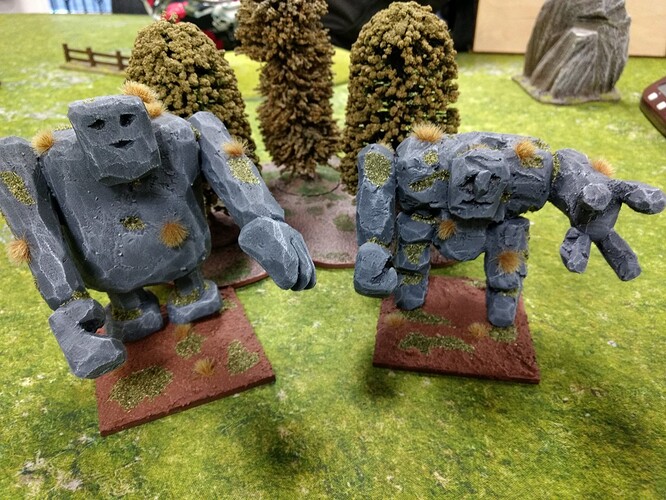 So, what did I do at the tournament? Well, the first thing that I didn’t do was take any photos and so most of the pics in this article are pinched from the Lazy Pirate. This in no way breaches his copyright. Honest.

GAME 1 – LAZING WITH STEVE AND HIS ORCS – CONTROL

For Game 1, I faced the Lazy Pirate himself with his Orcs in a Control scenario.

The game descended into 2 separate battles as we fought for control of the right flank, from my perspective, while grinding away in the middle. There were big swings in this game with 6 Double 1s between us, thankfully evenly distributed. Steve had a particularly good turn 3 and I had a particularly good turn 4 which enable me to use my mobility to seize the key table sections.

With many of the top players scoring the maximum 25 points in their first games, I was a bit off the pace but it at least meant that I did not have to face a Nightstalker Soulflayer hurricane in this round. Instead, I was to face Matt and his really colourful Salamander army in Fool’s Gold. We deployed our bluff counters and Matt completely bluffed me as to where his valuable ones were. We set out our forces and we were off.

The terrain was much to my benefit in this game and I was able to block the Salamanders into one side of the board and pick the charges that I wanted to take. By chance, I managed to keep his army away from his valuable counters and once we turned the counters over at the end of turn 3, I was well on top – as much by luck as judgement. I moved my units to cover the key tokens and secured the win.

My reward for 2 wins was to face Moonraker Andy and his Kingdoms of Men in a Plunder scenario. Having beaten Andy in a practise game, I went into this one full of confidence. Oh dear, hubris is my middle name.

On my left, Andy advanced with flying Beast Cavalry in front of a big horde of men. He flew his hero with Wings of HoneyMaze into my Knights on that flank to pin them in place. To counter this, I charge a Pegasus into the flying cavalry to try to knock off a wound and ground them whilst counter-charging the hero with my knights and Champion of the Green Lady. Deep joy as my Pegasus wounds the Cavalry and then causes an unlikely waver that will pin them in place and allow my Knights to charge them down. Deep despair as I rip the winged hero limb from limb and then roll a Double 1 that pins my own cavalry in place.

On my right, we had been dancing around each other. I was forced to give up a flank on one of my Redeemers to Andy’s General on Winged Beast. I thought that I had a reasonable chance of surviving this as the General was hindered so: 14 attacks, hitting on 4s, wounding on 3s; somewhere in the order of 5 wounds. It probably was about 5 wounds but when you roll a 10 and then an 11 for the Nerve test its goodnight. I also made a bad positioning error on this flank that allowed them to be flanked and destroyed.

Although the venue was air conditioned, it had become quite hot by the end of the day and no one was in the mood to travel far for food and drinks. We chilled at our hotel, joined by Rich Miles, and we spent a happy evening as Rich introduced us to some interesting adjectives describing how bad Orcs are in KoW. Spoiler alert, Rich navigated his Orcs into 6th place at this event.

With all of my knights and fliers, I was keen to avoid large numbers of units with Ensnare and/or Phalanx. Then Dangerous Dave hove into view with his League of Rhordia featuring 5 regiments/hordes with Ensnare and/or Phalanx. Looking at Dave’s list, I was most concerned by the 2 hordes of Dogs of War, the horde of Honour Guard and the 2 Volley Guns.

Amazingly, my plan sort of worked. I had destroyed his Guns by the end of turn 3 and razed the 2 tokens that I had planned. Dave advanced on my right and swung inwards, razing 2 tokens and threatening my flank. In the centre, I fed chaff to one of the hordes while I charged into the 2 regiments there and managed to kill them over 2 turns. The terrain and his own units helped to block in his big hitters. At one stage, I combo-charged a horde of Halflings and got them up to a Gazillion wounds (this might be an exaggeration) and then rolled a Double 1. I was about to charge in during the next round but then realised that the Halflings were holding up Dave’s army and so I resisted the urge to charge and let them bat away ineffectively against my De 5+, Regen 5+ Knights.

I nearly threw the game away in turn 5 as, having used up my chaff, I decided to pin one of Dave’s hordes of Dogs of War in place with my Champion of the Green Lady. I hadn’t been expecting the counter-punch. Dave had given the horde the Razors of Berlonviche upgrade that reduces the Me value to 3+ and makes them Elite. Coupled with the Brew of Sharpness, this unit had 30 attacks hitting on 2s, re-rolling 1s. He hit my Champion 29 times. Having Bane Chanted the unit, he was wounding on 4s. Ouch. The inevitable happened and my Champion’s blood was spilled all over the green fields. And then I realised my mistake. Not having anticipated the butchery that went on, I had a horde of Order of the Forsaken within overrun distance. I held my breath and Dave came up 2” short of the required roll. Lucky.

The game ended with us both having razed 2 tokens and with me controlling the centre for the win. My tactics however, meant that I did not kill much of Dave’s army.

Going into this game, I realised what a favour Andy had done for me by winning our game yesterday. By being the overnight leader, he had to face 2 games against Nightstalker Soulflayer filth while I avoided both of them. Thanks Andy!

Looking at our lists, this was always going to be a difficult match up for Alun’s Basileans.

I went in strong on my right flank and Alun countered. Perhaps the defining moment of the game came when he charged my Order of the Forsaken with Knights and an Abbess with Blade of the Beast Slayer. He was unfortunate to only waver them and in the next turn they passed their Headstrong test and joined in the counter-charge that secured the flank for me.

I was very proud of myself for holding back in the centre and left until my right flank could swing in to join the party. This allowed the Basilean Sisterhood Scout troops to shoot off my horde of Men at Arms. Ten attacks, Scout, Ra 4+, Steady Aim, Vicious (Ra) and cheaper than Gladestalkers! Nerf these ladies now!!!

However, Alun was now faced with potential flanking moves everywhere and I was able to chaff up units to allow me to win the important combats that I needed. The final moment of the game, and tournament, came when I charged everything I could into his sole remaining unit, a Basilean Priest. A Gazillion wounds and, yes Double 1.

I managed a 5th place finish with Moonraker Andy coming in 8th. 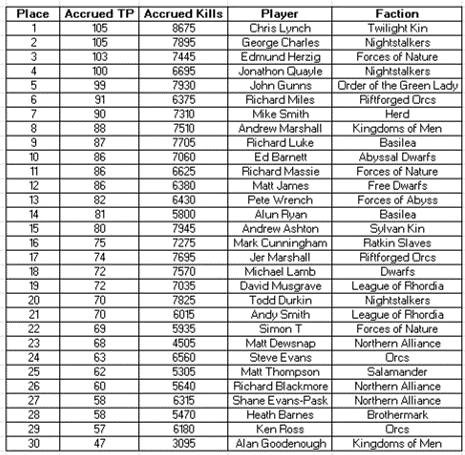 A great tournament. Thanks to Eddie who TO’d the event to great effect. Thanks as well to all of my opponents for 5 great games. It was really nice to play against 5 different armies.

See you at Mean Squeaks.

Cheers for the game Jon - those Razors are fun, but you kept them from chewing through the important stuff for long enough.

Bloody halflings - didn’t have the decency to die quickly!

Great placement with the OOTGL, dark or otherwise

Cheers for the reports!