Why has the Kingdoms of Men Polearm troop gone?

As I read the review om KoM my mate from regum aeternum posted, I agree with a lot of his assessments.

Generally we’re both very happy with the way Kingdoms of Men have gone from 2nd to 3rd. The indomitable will upgrade is a good army special rule; the passive boost to charge ranges for hordes help us and our medium flier and war machines are actually fieldable now.

While he’s also very disappointed with the rebranding of the beast of war (something I somewhat agree with, but I can live with ) there’s something that both of us feel as a loss that hurts (or in his words “stings”)

It’s the loss of cheap infantry troops other than shield wall.
In KoW version 2 we had access to troops of spears, shieldwall, polearms and militia in addition to foot guard and fanatics and the various shooters. Especially the polearms and the militia were taken a lot, the previous due to CS(1) and the latter due to the point cost of 50. In KoW 3 we lost access to troops of polearms, spears and militia.

Of these, I fully understand the loss of the spears (they don’t bring very much to the game compared to the shield wall troop) as historically, fielding spears in just two ranks was not that useful. Also, the loss of the militia troop is understandable as a 50-point troop might be a little too cheap.

I just don’t understand why the polearm troop had to go. I loved the 70-point unit that could serve both as chaff and mini-hammers. I have played armies where I fielded 8 troops of these guys and even though it wasn’t super-effective, it was fun as hell to play!

Especially as the alternative choice (+1 def/no CS) is still in the game, even at a discount!

Is there a specific reason they were taken out? Can we expect them to return in a future implement or are they gone for good?

It looks like it was an RC decision. I just checked and it’s not on the list of changes I asked them to make. I wasn’t involved in the decision as far as I can recall so I don’t know I’m afraid.

Thanks for the reaction. Hopefully one of the guys will reply the reasoning behind it!

Of course they’ll now remind me I told them to do it!

According to Chris Morris it was a request from yourself Matt in a call.

Polearm troops & Militia troops are both gone. It was totally unnecessary in my opinion. KoM hardly have a lot going for them. One thing is versatility. The cheap troops could have been one thing to help set Kingdoms of Men apart from other armies.

Of course they’ll now remind me I told them to do it!

According to Chris Morris it was a request from yourself Matt in a call.

Apparrently it’s not that clear how it came to be that they were lost and the reasoning is also clouded. Would it be too much trouble to re-include them in the next Clash of Kings update? This would make me -and a lot of KoM players- very happy. 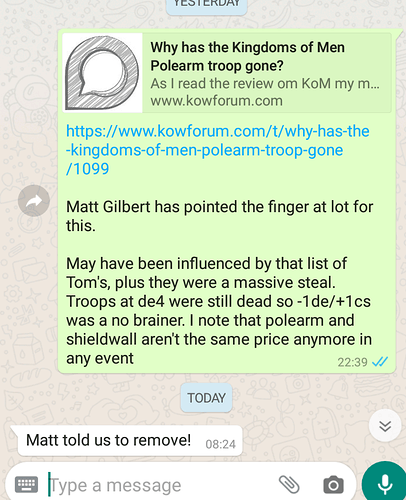 I’d also like to see the return of polearm troops, as shieldwall troops (the most standard of units) seem a little dull.

If they were too good for the points (don’t know if this is true) then a modest points increase seems like a better solution.

If they were too good for the points (don’t know if this is true) then a modest points increase seems like a better solution.

Polearm regiments are slightly more expensive than shield wall regiments. Makes sense to have this difference too in troops.

Edit: I’ve reposted this on my blog. Keeping fingers crossed for Clash’21 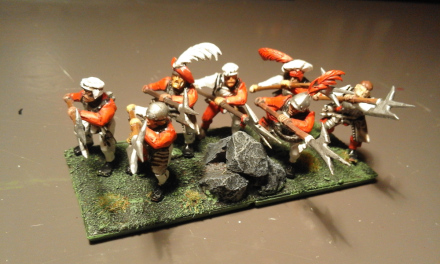 Why I have good hopes the polearm troops will return

The other day I posted on the KoW forum about the loss of our beloved polearm troops. This was the post: As I read the review om KoM my mate from regum aeternum 2 posted, I agree with a lot of his …