As some of you know, I recently reviewed the undead army in 3rd edition. As my first game is being planned now, I spent some time transfering one of my favourite 2k armies to 3rd edition.

My very favourite undead army included a goblin detachment which I don’t want for my first game of 3rd edition. For the first game I’d like a pure undead army, after which I can include as many allies as I’d like.

You can find my armies and the transfer over here: . I’d like your advice on my choices.

The conclusion is that the army transfers well from Clash '19 to KoW 3rd, losing only a few legendary spells, a legendary dude and a formation. This allows me to re-include an old favourite of mine. If this is the wisest choice, I don’t know.

Edit: We really need to come up with a fan-based nickname for RKoUGFW (Revenant King on Undead Great Flying Wyrm). Not only does it not fit in my spreadsheets, it also does not inspire the glorious feelings it should.)

Nazgul? The ringwraith’s were undead kings, and they rode dragon/Wyrm like 'fell beasts" during the latter parts of the War of the Ring.

Other than that, I’d suggest “Wyrmwraith” instead of ringwraith. Has a nice ring in it due to the alliteration.

On the original subject: someone mentioned he couldn’t follow the above link, so I copied the basics from the blog post:

In 3rd, this changes to the following army: 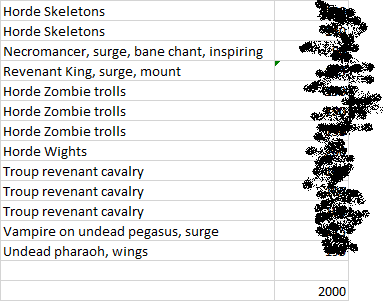 The above list is something I’m willing to try. First all, I axed the ghouls and wraits for 3 troops of revenant cavalry. I’d rather have 3 troops of -/14 roadblocks than the 2 troops of wraiths and the ghouls.

The two hordes of skeletons remain as my main anvil. ‘love these guys.

Then, then RKoUGFW (Revenant King on Undead Great Flying Wyrm – man, this guy needs a nickname….) who already replaced Apahphys was sacrificed for the more conveniently-based vampire on undead pegasus.

Furthermore the 3 hordes of Z-trolls and the wights stay as the core damage dealers of the army. I’d like to switch out the Z-trolls (at least partially) for soul reaver infantry, but as I don’t have the miniatures, I won’t do that now.

the leftover points leave me with an old favourite of mine – the flying undead pharaoh. I’m not sure if he’s as useful as he was in the past, but I wanted something to disrupt enemy shooting and/or fliers which the army may have dificulties to cope with.

All these shambling guys need some serious surge. That’s why ll four characters in the list have both inspiring + surge, so there’s some serious surging options. All four have an alternative role – be it bane chant (necro), disruption (rev. king/pharaoh) or combat (vampire)

The army has 13 elements and a unit strenght of 22. This is comparable to the original army which usually outnumbered its opponent.