3D Printing as the Future of TableTop

I would presume you’d still need to prep the mini after printing so the printing itself doesn’t let you skip clean-up?

I view it as another hobby nearly. I’m more interested in print on demand services rather than printing myself (anyone with links to such service in Europe would be appreciated).

I really love the analogue nature of the hobby. I have never used an airbrush to keep this feeling intact.

I run data centres for work and the thoughts of more machines, wires, pipes and graphic user interfaces in my hobby makes me go cold.

Saying that the results look excellent. Same with airbrushing. Ahhhhh!

That’s completely valid! One of the great things about the miniatures hobby is that you can make it whatever you want. Yes, there is some cleanup after the print but it is very minor, from a time perspective, compared to removing mold lines in my experience.

I don’t know what I would do without an airbrush, I paint too much not to have one. I rattle can primed a few tanks the other day because I am rationing my airbrush primer and just felt like it was such an innefficient use of my time. I use a brush for details and blending but the airbrush gets all the big color areas down for me. Basecoating is my least favorite part of miniature painting, so getting that done fast is important to me.

Do you have Etsy in Europe?

I’ll give ETSY a look.

I rattle can for priming.

All the cans I’ve tried have left white marks.

Yes, varnishing is also a fantastic use of the airbrush. I liked Testors Dullcote for a long time but it gets expensive and sometimes it’s hard to find. I have better varnish options with the airbrush and I’m not restricted by the weather.

There’s nothing wrong with priming with a rattle can, I did it for years. But I haven’t done it in so long that the stark contrast in efficiency was really slapping me in the face.

I used Vallejo brush on primer for years …

For me it’s a collection , i like the original Mantic games and Games workshop miniatures. I love the lore behind them, the collection boxes and so on. I’ll stick to the real deal.

And that’s a legitimate view as well. I’m not abandoning buying miniatures, far from it. The difference now is that I don’t have to buy models I don’t care for. Also, I am all about awesome miniatures and if a company makes something cooler than I can, then they get my money. Where the true enjoyment is going to come for me is when I get my skill up high enough to start designing my own miniatures. Fielding an army that I made myself will bring me an inordinate amount of satisfaction.

Good point, a nice model is a nice model and you can give you own backstory to them…hmm, perhaps it’s not that bad of an idee. after all I do this with kings of war and warhammer to ,a backstory i meen.

How are the miniatures as in not having to remove mold lines and spruce left overs ?
That would be a big plus , not having to deal with that.

While there’s no mold lines to remove, I still have to remove the supports added to the model so it prints correctly. I heat up the model in hot water after cleaning off the liquid resin. They basically rub off with my finger. Might be a small amount of filing/sanding depending on the location of the supports. Then there’s a post cure under a UV lamp. Overall, it’s significantly faster than mold line removal and I have control over where the supports are placed. So I never have to damage faces, hands, hair, etc.

I have had my two printers for about a month. I have had two issues, I had to change the FEP film on my Anycubic Photon due to me being stupid. I also had a small issue with the Z-axis adjustment on my Prusa MK3S that I solved easily with the instructions on the manufacturers website. I will probably have more issues in the future, but when I look at what I can do with 3d printing its worth a little bit of overhead.

Still very much WIP but I think it shows what you can do with 3D printing, sure there is some clean-up and especially the FDM prints takes forever, though it’s not supervised so it just does it’s thing until it’s finished. 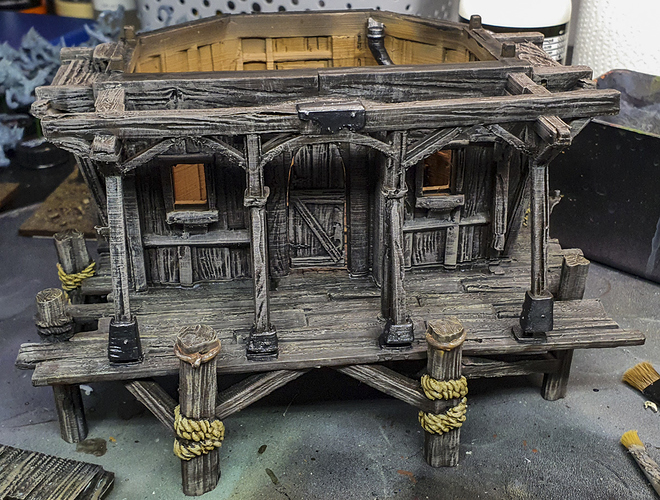 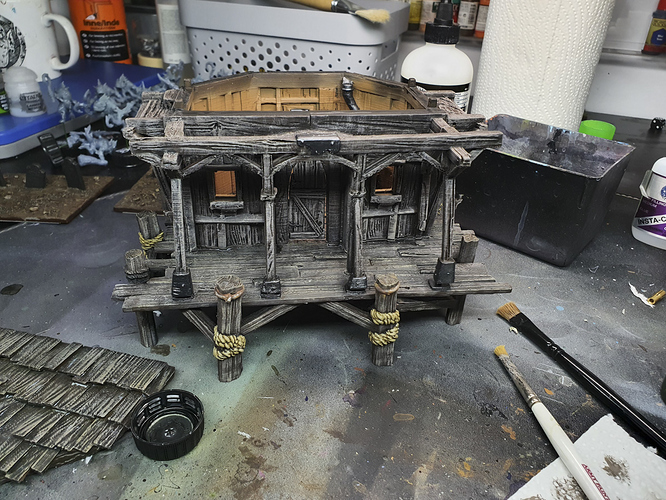 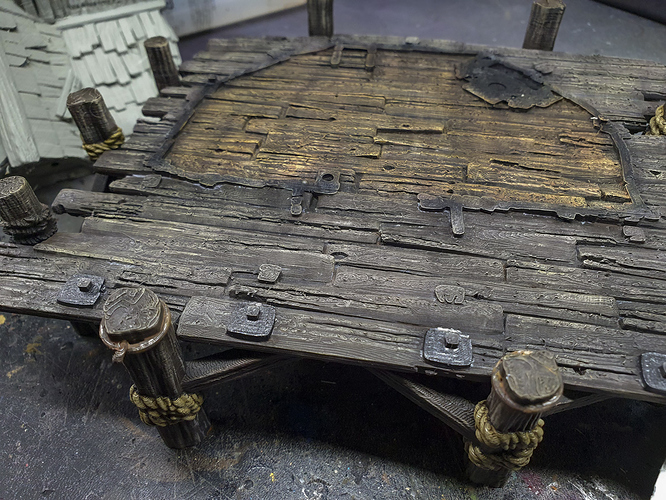 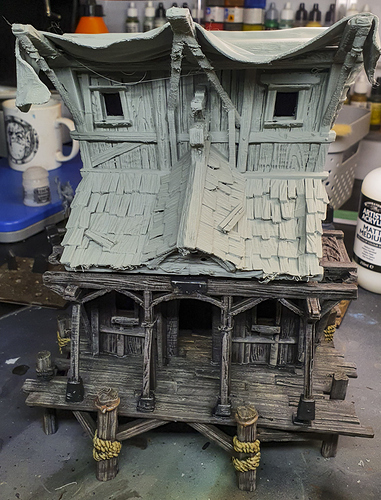 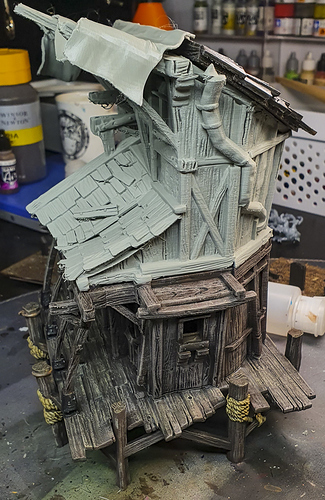 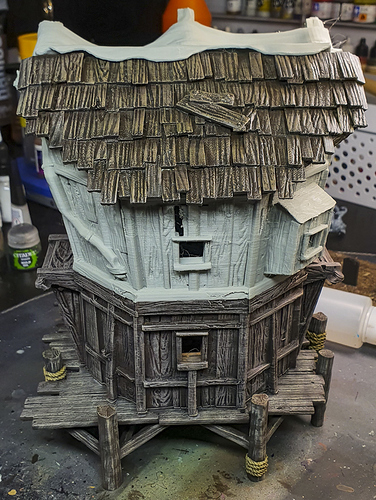 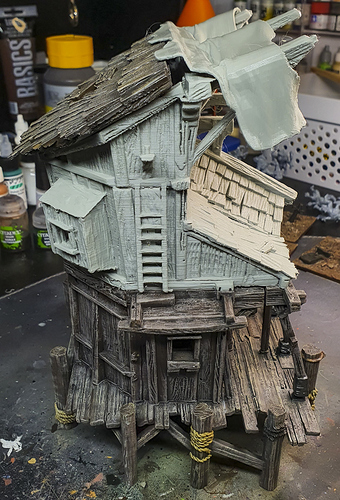 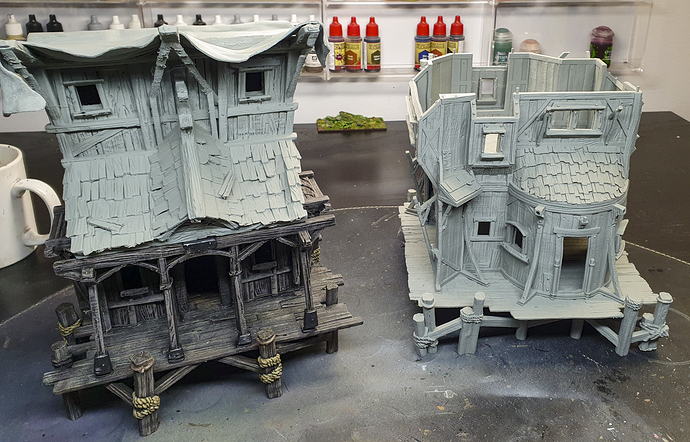 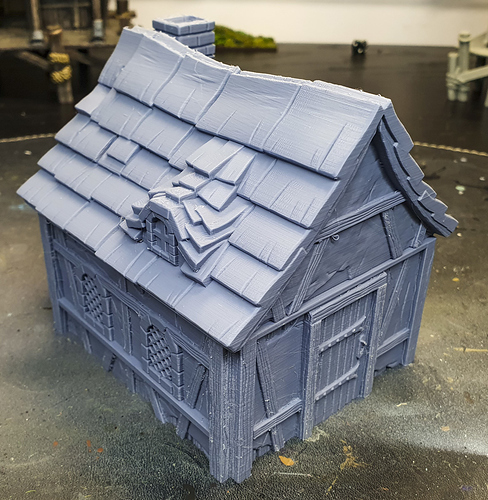 I thought about adding an FDM printer as my second one for terrain. I have some developed skill when it comes to making nice terrain but I doubt I could build something that detailed faster than the printer does. However, I don’t really have the room for one and an enclosure (which I would need for my situation). However, I’m thinking instead about getting the new Elegoo Saturn when it comes out in August, I want that bigger build plate.

Its really cool seeing what everyone has made with 3D printing. The terrain especially really looks cool.

I think one aspect why I can see 3D printing taking a larger role is the loss of the FLGS to play at, if it was ever there at all, in some parts of the world. The reason I sometimes consider it is because I have to bike 40 minutes to go to the city to visit a shop, there are four of them within 5 minutes walking distance from each other.
One switched to board games only years ago (no room to play, just sells),
Another switched to escape rooms instead of wargames (still sell board games and magic) and they never had room to play even when they did have various wargames
The third has room to play but has stopped doing kings of war to have more room for magic and occasionally rpgs.
The fourth is games workshop. It is the only one that runs demos and has tables to play at, but only for warhammer of course.

So I can’t just pick up a box of dudes, even though its only a few minutes out of the way of my commute (I wanted to pick up the book for KoW with cash real quick for example and went home empty handed. Ended up not getting a physical version of the book at all). I have to order things if I want them, and none of the shops in my country have the combination of good selection and a usable webshop. So I end up ordering from Germany or the UK anyway, and need to order in larger batches to mitigate the shipping costs.

I can imagine that there are other places, particularly remoter locations, that face similar problems that at home 3D printing might help after the expensive initial buy in.

I’m lucky to have a local store that has plenty of play space but I usually have to have them special order minis as they don’t tend to carry what I need at any given moment, most of the stock is Games Workshop and Privateer Press. I try to only order online if they can’t get something through their suppliers.

There are a couple of interesting podcasts on Counter Charge about it.

The cost per figure is lower than commercial plastic and resin but you have some nasty chemicals (resin) and its time consuming to get setup / do. So a trade-off to make. I will get quicker I’m sure and maybe the materials will improve too.

For me I’ve not the time for another hobby so I’ll just buy stuff for now.

The learning curve on the actual printing and processing part is easily overcome with time (assuming you have enough to spare!) and practice but one of the challenges right now, for me at least, is actually finding the proper STL files for wargaming. The bulk of the 3d designers tend to be focused on RPGs or 40k. Finding sculpts that are modular or at least contain enough poses takes work and the pickings are a tad on the slim side.

It s a good point - ideally you’d want to be printing either multi-pose or something a bit like frames, not mono-pose types

Indeed. Not having enough poses is my biggest gripe with several of Mantic’s newer minis so I certainly don’t want to continue that trend in my own printing.

Discovering sculptors who are putting out multi-piece or multi-pose designs has actually been a big push for me to want to get started. Shout out to Artisan Guild and Comet Lord, tho I’m 100% sure there are others.

I’m a Comet Lord patron but I buy Artisan Guild files individually. Another decent one is CastNPlay.