The topic title says it all, more on the KoW October releases at the Mantic blog.

This looks very appealing! I wish I didn’t already have the softback & hardback rules now!

Although maybe if it is reprinted with the errata… ?

Some more news on the Halpi’s Rift suplement, again on the Mantic blog.

I am looking forward for the campaign setting and CoK 2021 adjustments. It looks some special characters are returning, I would like to see Flaxhoof back with a nice aura to enpower my centaurs that seem to underperform quite a bit.

Tempted just for the Ratkin models… do I really need a 7th army?

having built the ratkin, yes.
yes you do.

Can you build spear rats and single have weapon rats with that kit?

And is the starter set rule book just the basic rule book again?

i’m loving the new goblin sprues they are showing

Until you have a 7th, how on earth are you going to have an 8th or 9th?

a valid point there

Does anyone know how “exclusive” the exclusive models are?

Is this the only way to get them? By buying this set? 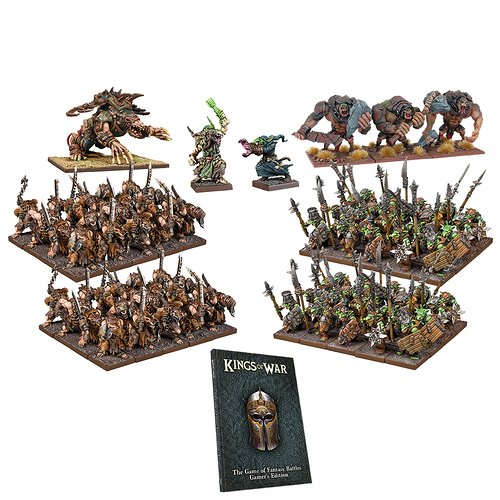 Amidst the chaos of a vicious underground war between ratkin and goblin tribes, and a counter-strike from the Free Dwarfs, their black-souled cousins have uncovered an ancient and incredible power source. They have tapped into the magical structures...

Unfortunately not a fan of the new goblins. I still would like ‘rabble’ but from the photo so far it looks like the weapon is ridiculously big…

Can’t argue with that logic, my bank account however may be able to argue.

no word at the moment but in the past exclusives have gone to Mantic Points after their time is up. So they may appear there in a year or two

the weapons are scaled to what they are, so basilean sword or abyssal dwarf. The goblins are a nice size and some of the weapons look large because they’ve stolen them off bigger races. I’d be more concerned if they shrank the weapons to fit the goblins. But it’s all personal taste at the end of the day

Well that sounds fairly annoyingly exclusive then… I don’t totally MIND getting this box, I just would rather get them separately really. But if that won’t be an option or won’t be an option for years later then that would be good to know NOW so I know to order or not…

Come on Mantic, vague stuff like this really bugs me

They steal them!? I thought in pannithors lore they are really industrious and build all kinds of war gear…
But you are right, at the end of the day it’s personal preference. I’m also no fan of standard ‘warriors’ of goblins in vanguard having plus 1 crushing strenght… On the other hand for THEM it made sense to me that the weapons are that big

So far, i’m still on the fence whether to buy the new Mantic goblins or the Shieldwolf forest goblin minitures. The price is ever so slightly cheaper and they would go well with the spider riders i use , but on the plus side, the Mantic sprues come with Mawpups. I’d be tempted to buy the army set, but 6 trolls- really? Although i do like the Mincer in that set. The Mega army set would be OK too, but i have two giants already, and again 6 trolls! Ever get the feeling they are trying to flog off a truck load of Trolls that aren’t selling well

I’m not sure about the metal king model either. Of the three Vanguard goblin HQ set, he’d be my third choice , with the natty Wiz coming first. The Wiz in the Starter kit isn’t bad either, to be fair, and thankfully only three trolls, but if you were building a big goblin army from a mix of these kits, you’d soon drown in trolls… a Winggit or something else in one of the three kits wouldn’t be too much to ask …IMHO.

standard goblins don’t get CS1 in vanguard, luggits who are bigger goblins armed with heavier weapons do, but rabble and spitters don’t.
and in the lore “occasionally a goblin will (unfortunately) need to engage in melee combat. In this case, they will scavenge whatever weaponry they can find and group together in large, unwieldy swarms. The resulting Rabble is chaotic but potentially deadly.”