Centurian Bigheth Dikheth and his Roman Invasion (Kingdom of Men ?)

Despite the fact that the paint is still wet on my Free Dwarf army, that i was planning to do final touch ups to this weekend, but before that, I have my King Braefart Wee Free Dwarfs first Kings of War battle ( I did blood them in a Warhammer Fantasy game, but i had to leave out my Broc Riders and teir lord,) Today, i am fielding them against my Goblins (or the ones that are Mantic made, at least. Both armies are weighing in at just under 3000 points.
However, I digress.
For some time now I’ve had a hankering to make Tortoise Shield Wall formations (Testudo). I made a similar formation with Orcs, and had considered it for my Dwarfs. However, no body pulled it off better than the Romans. I could wait no longer, so on Wednesday evening i started searching for a good starter army for my Romans, and Warlord Games Hail Caesar’s starter set “Early Roman Invasion of Britain” seemed the best option. I could have gone for another of Warlords many box sets, but this one has a scorpion war machine and a Commander on horse in it. In total it has 120 miniatures in there, but a lot are Celts. (who will join my Herd army miniatures as an opposition force) I’ll add some axillaries, cavalry, more war machines and more HQ options later.

Like my Dwarfs, i’m going to build them for multiple gaming options, but mainly I’ll focus them to fit in Kingdoms of Men , and hopefully find an option to use in the Historical games, Warhammer 6th , and the Hail Caesar game itself.

I placed my order late on Wednesday evening, through Amazon .co.uk, and much to my surprise, it is arriving at my home in Ireland less than 48 hours later, with only minimal postage charged and no custom charges. That is impressive . Mantic usually takes 4-5 working days, and well let’s just say GW doesn’t get close.

In some ways, this army could be a challenge for me, as my Celtic blood (or my inner Punk Rocker) struggles against conformity. Most of my armies are wild and random, such as my Orcs and Goblins, and my Celtic themed Herd army, so we will see how historically accurate i can do, or whether the chaos lord within goes mad and takes over.

Rome did use lots of allies, so gives you plenty of scope if you get bored of painting regular infantry.

It’s also an army style that can be run as a variety of actual lists, so you can add beasts etc and still have a workable KoW force

Good to know, thanks.

I’m assuming, and correct me if I’m wrong, but given that i already have plenty of Celts, that I could use some of my Celts as auxiliaries. For instance, the ones wearing chainmail. (which have always seemed out of sorts with the rest of my Tuatha De Danann /Herd army).

In KoW terms, units if Kingdom of Men as perhaps a Shield Wall or Militia Mob unit

Yeah, you can get away with squeezing pretty much anything into a Roman army as allies/auxiliaries - anyone the conquered could get roped in, so thats anything from celts to camels!

This is quite a decent summary and gives you an idea of what you can do. 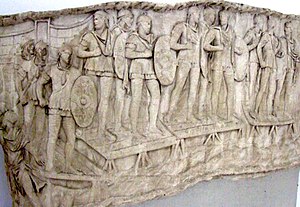 During the Principate period of the Roman Empire (30 BC – AD 284), the all-mounted Alae ("wings") contained the elite cavalry of the army. They were specially trained in elaborate manoeuvres, such as those displayed to the emperor Hadrian during a documented inspection in Numidia. They were best-suited for large-scale operations and battle, during which they acted as the primary cavalry escort for the legions, which had almost no cavalry of their own. Roman alares were normally armoured, with The...

@Sceleris Many thanks for that very useful link. I knew about the lethal auxiliary German cavalry , and as you say, Rome would happily use any strength from a beaten foe quickly becomes a strength for Rome, right down to the Spanish swords, camels, elephants…

Basing : My next challenge is basing. Hail Caesar Invasion of Briton recommend that i split the 40 legionnaires into 2 units of 12 and one unit of 16.
WHF 6th would say ideally single models, but you can work with some singles and some multiple models that you might want to switch around as models die. 4+ wide and however deep you want
KoW is either troop or regiment, 5 models wide and 4 deep ideally, for 20 model regiment but MMC of 15
With that in mind, I’m trying to figure out how to keep all happy.
Firstly, KoW Infantry Regiment = 100mm x80mm base. So in Hail Ceasar terms that is 4 of the 40x40 bases plus 1 base of 80x20 or 2 of 40x20 or 4 single 20x20, which would also appease WHF6th ed.

As jack Sparrow would say , “The pirate code is more what you call guidelines than actual rules.”
So first we abandon the recommended unit sizes from Hail Ceasar, (for now) .

I should add at this point that my objective is to also create a Testudo, (tortoise shell formation. ) This is where things get complex. The models are real 28mm, not the 30/32mm ones. In fact even for 28mm miniatures, they are dwarfed by Mantic/GW models, so fitting them in rank and file is not the challenge that say Northern Alliance Human Clansmen can be, far from it, in fact. you could drive a bus through the gaps. To make any sort of shield wall would require at least 8 if not 9 models for the 100 mm base front rank to get any sort of dense rank. Now, this should not be a problem for KoW bases, as you can set the models on the 40 by 40 base with three in the front rank and a forth in the second rank, (on the outer edge, ) leaving a space in the other back quarter. This would not be noticed when the shield roof was affixed. However, Templates for GW style war machine blasts or breath weapons would be utter chaos.

i see that you can, or rather , could have , bought a Testudo unit from Warlord Games, but not anymore.

Any tips on this? 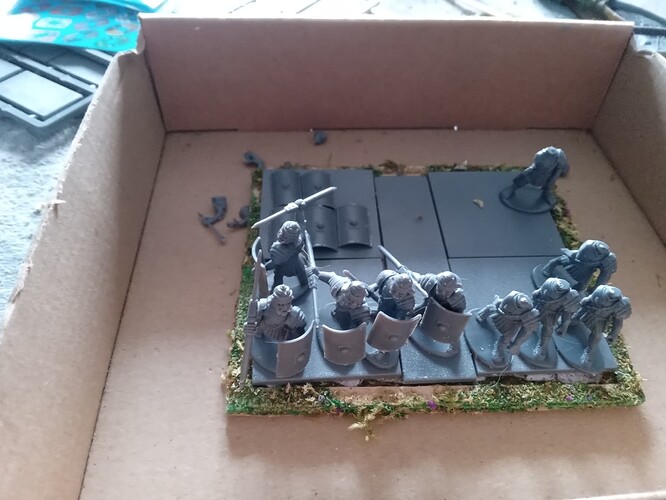 The answer, or answers to be accurate came to me overnight.
Victrix make the shields and stickers separately, in a bag of 60 shields for cheap enough, and Hail Caesar gave me another clue. In its rules it says that you might want to get a testudo if you are playing Romans, as it is a special defensive rule within Hail Caesar game. It also has cut out cardboard dead romans and Britons on the edges of the inner cardboard lining, to help tally the dead. They thought of everything.
So, all i need to do is take a picture off the internet, print it on cardboard and put that over my unit(s) if they opt for that formation. And… just for sh!ts and giggles, make up a physical copy of it at some point using Victrix shields i still have a few touch ups to do, as always happens when i take pics . My camera is a soulless monster with no pity😝 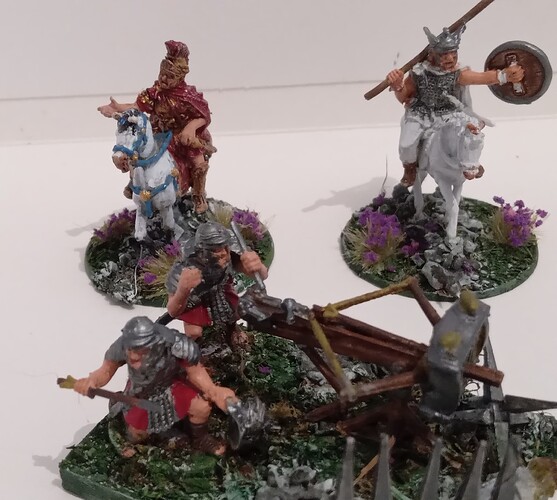 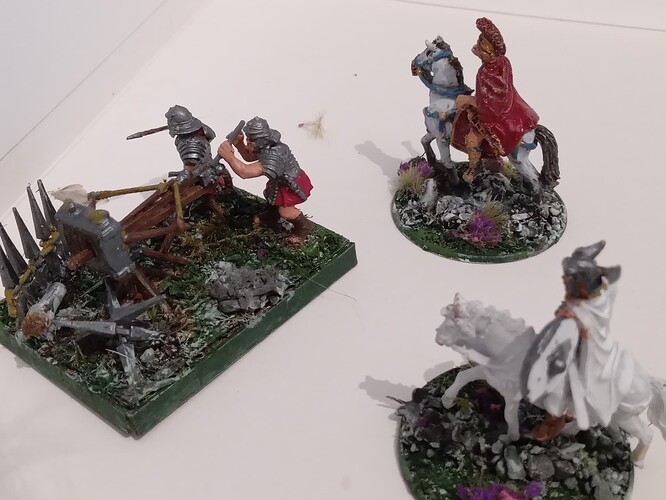 i was aiming for the horse to look like this… 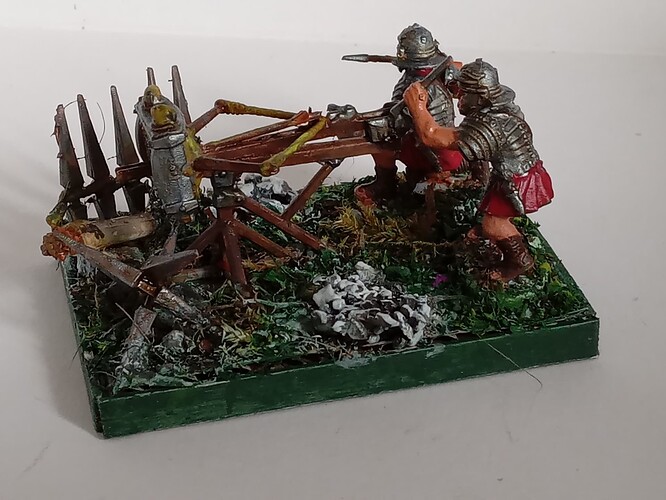 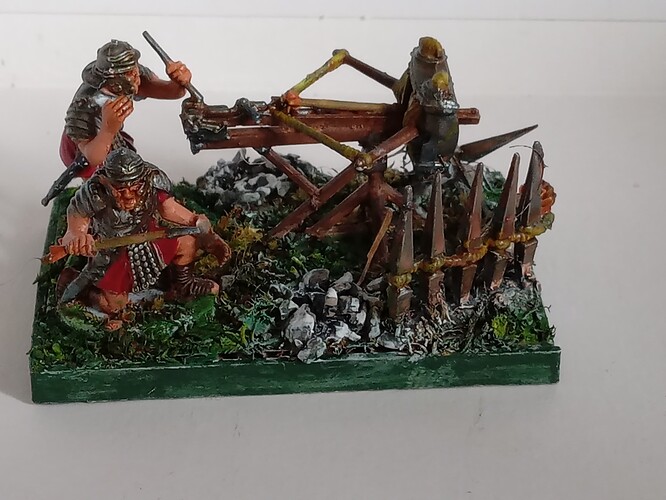 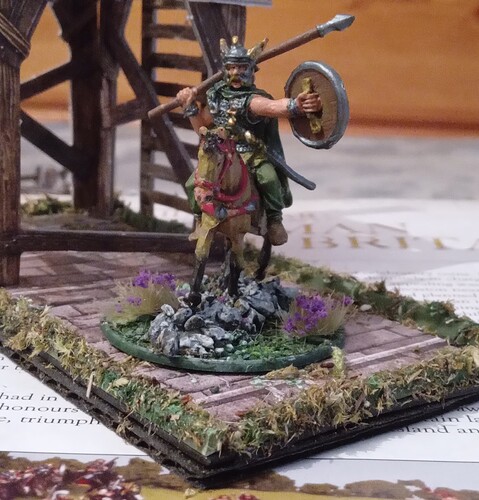 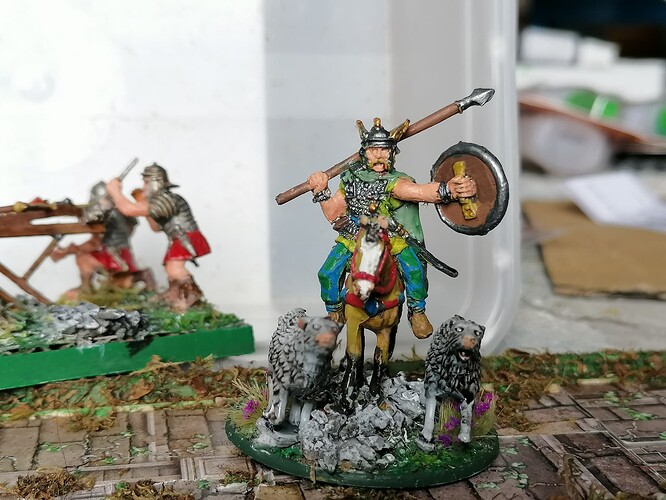 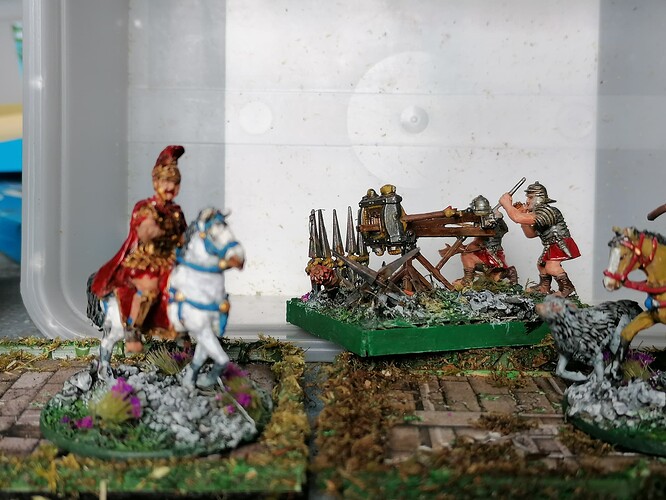 Still in the early stages of painting, but starting to look the part, my first Regiment/cohort of Roman Legionnnaries Close to completion now I think. I’ll look at it on the morning for a final check.

I have been painting and repainting my Early Imperial Roman Commander’s cloak, over and over, trying to dry brush the raised areas to accentuate the folds, but failing to get what i wanted. I took one look at someone else’s model, and how they painted their cloak and knew what i was doing wrong. It wasn’t the raised areas that needed lightening, it was the shadowy areas where the cloak creased that needed darkening. Easy once you see it. 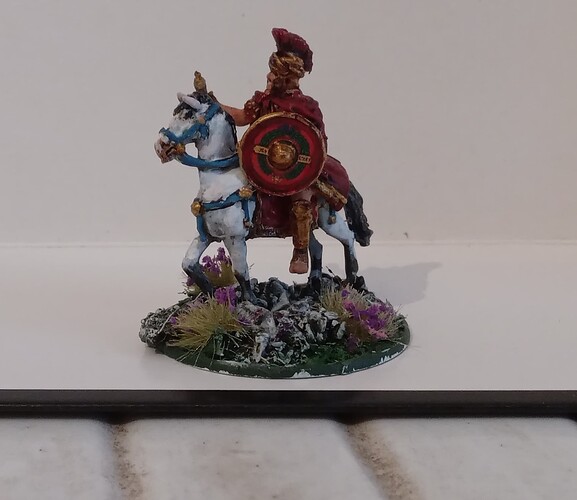 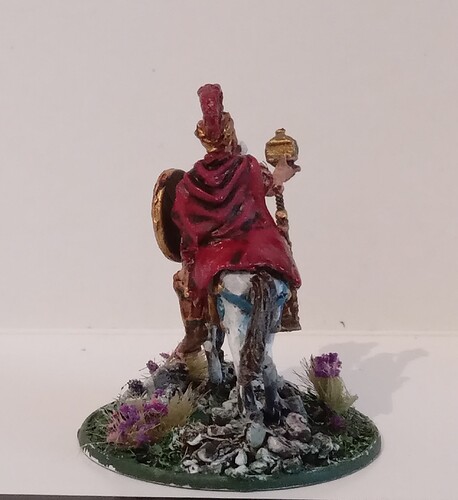 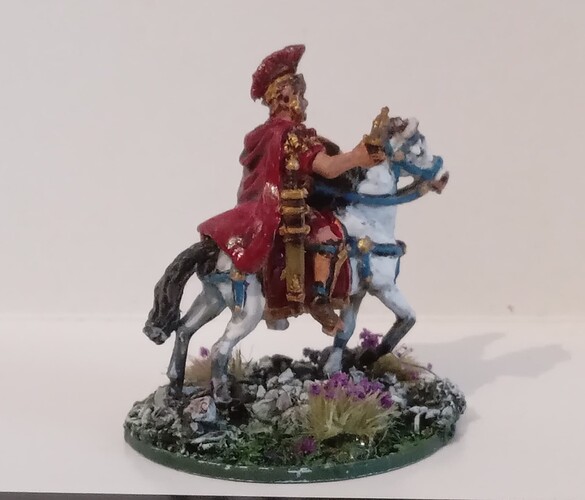 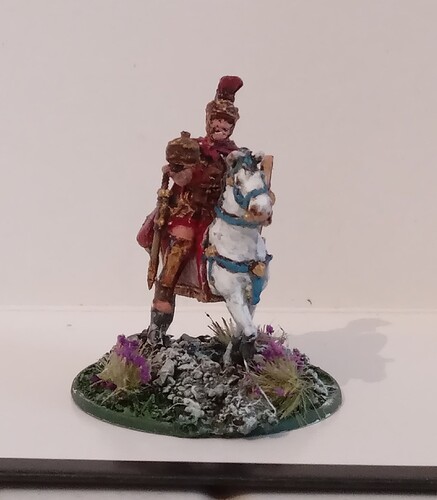 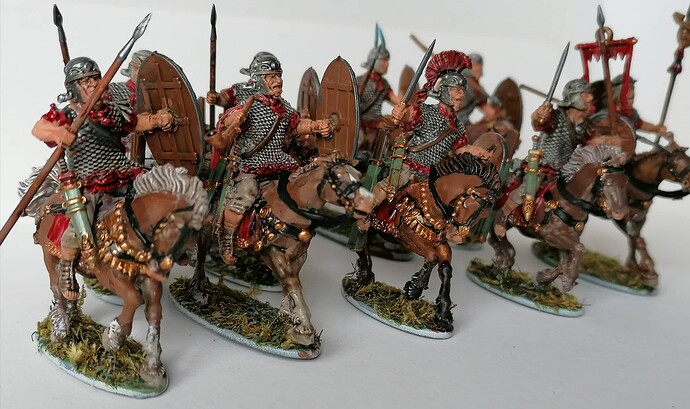 h12000×1287 249 KB
I’m sure that when I look at the pics in detail I’ll find lots of problems, but they are looking good. There is a lot of details, sweet sculps, and 2 distinct units of 8 each. I’m waiting on San update on shield transfers so I’ve just a blue ink wash for now.
3 Likes
next page →