So as you may have noticed I’m branching from Kin into the Nightstalkers side. 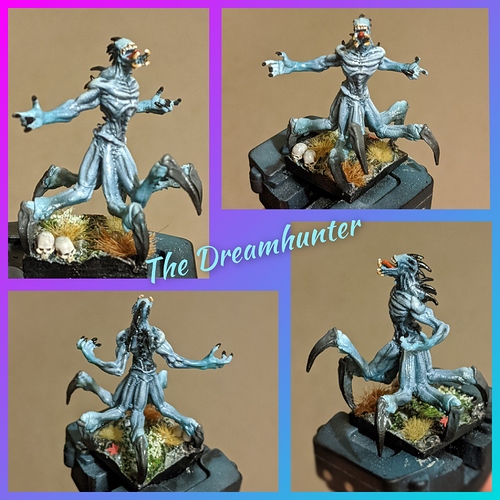 I really love that Dreamhunter sculpt, just on its own gribbly merits. Way to work his base into the Scarecrows! And that Shade sculpt is another weirdly awesome Mantic sculpt - so x3 checks out 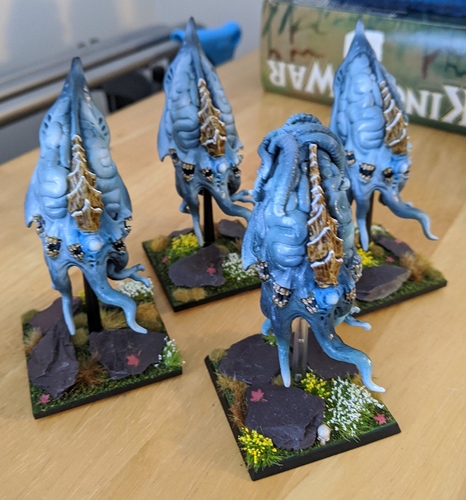 This was the army took for the game on Monday night… 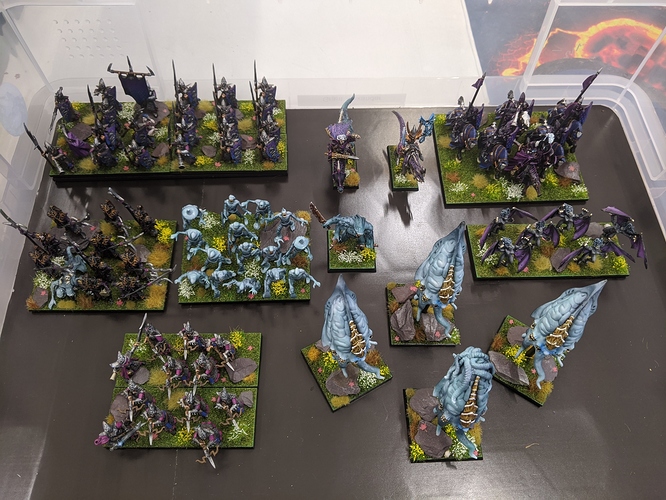 Cheers. I’m a fan of the majority of the Mantic Nightstalker line. Only ones I’m not too fond of are the phantoms, mainly due to the monopose.

As soon as saw the big rock from the diorama thought it would look good in the middle of a multibase unit.

Thank you for the kind words.

This was the results for the event that I attended.

This game was always going to be tough. His list was perfect for taking me out. The board was full of hills which also helped him too. The final nail in the coffin was a charge into some gur panthers that did 12 wounds followed by double 1 (1 of 4 that I rolled). Dem da breaks.

Result: Loss 1-4 on objectives (kill pts were within 200pts so would have been draw on Kill! scenario).

Thankfully a more normal board. Dave doesn’t normally play at 2k pts so had a bit more experience than him. His deployment made things harder for him as he got a bit jammed up in the middle. Swept the right flank and then came in. Dave had some good fortune when he one-shotted some knights with a unit of fleabag riders (rolled 12 and then 11 for break test).

Had got to grips with my list by this point and after losing first game was more relaxed. Was a great game.

Result: Win 4-1 on objectives (kills were in my favour but not massively so).

Now this game was a bit weird. Mike is an extremely competent player and is handy with this list. He had just narrowly lost to the other Twilight Kin player at the event. The board we were playing on was plainly ridiculous. It was a massive island in the middle and on the right flank, and everything else was water so provided cover but slowed both our armies down (accept my one unit of knights that had pathfinder, although they kept getting stuck on the long hedge that was in the right-hand side of the central island).

This game was a cagey one. We traded off some units. Managed to waver a unit with a charge and hold up another wretch unit that basically jammed up Mike’s line. My event special character really pulled his weight but holding things up. After my knights took out some targets and then survived the retaliation and mages to regenerate damage, managed to grab all the tokens for the win.

Hindered dwarfs go very slowly, and simply took them too long to get into the fray.

Result: Win 7-0 on objectives (kill pts massively in my favour as only lost Lord of Nightmares and some gargoyles)

So the last game. I’ve played Rusty a couple times before. He’s a solid player with a normally really strong list. He’s also one of the nicest people on the tournament scene and he paints fantastically well.

By this point we are both frazzled. The hall was quite hot and neither of us were really with it.

Highlights of the game was a huge combat that involved his greater obsidian golem, and 2 hordes of golems Vs Lord of Nightmares, 2 regiments of knights, soul bane and backed up by the crone. After the dust had settled I’d lost a regiment of knights but had taken all 3 of his units out.

The scenario was Control. End turn 6 Rusty had a single regiment of black souls left. It was 6-1 on objectives. We rolled turn 7 and he moved them up to throw the mastiff to try and kill the spearmen. He failed and in retaliation the spearmen charged and killed them wiping out his last unit.

Result: Win 6-0 on objectives (lost unit of knights and a unit of gargoyles so kill pts big in my favour).

Results were announced and was chuffed to have come 2nd. 1st place went to my first round opponent. 3rd place was grabbed by Ian playing Trident Realms. So top 3 places filled with armies that are considered weak.

This was the army list and pic of the army.

Hope you enjoyed the report. 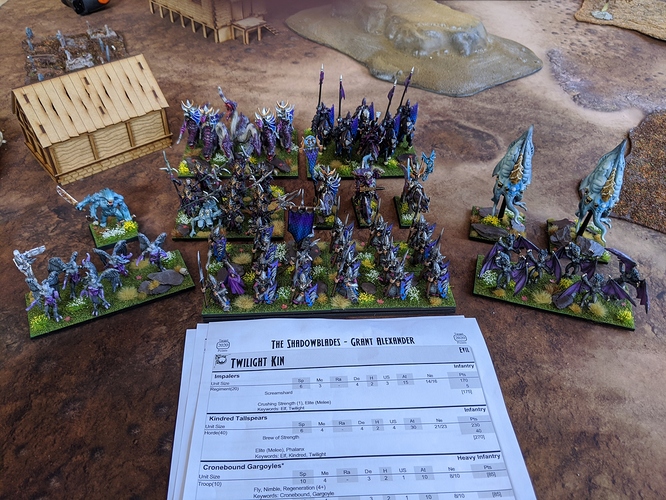 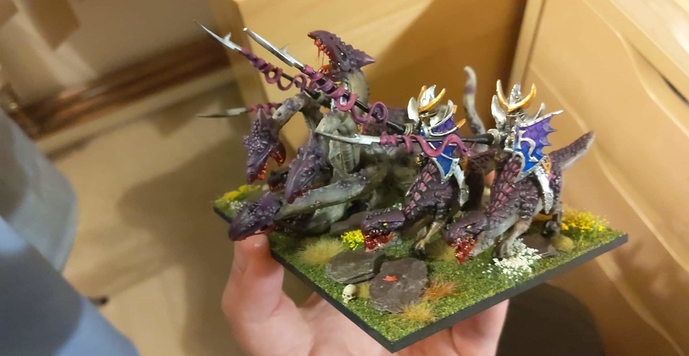 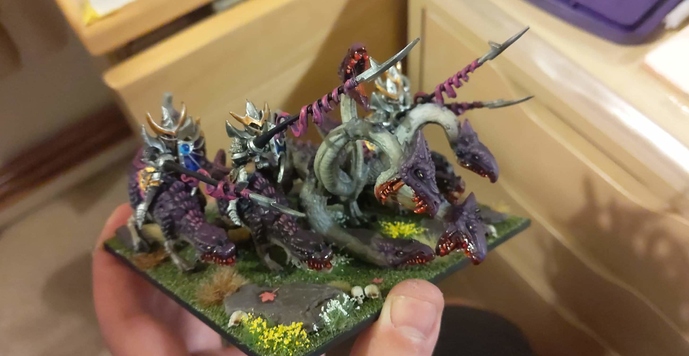 Got the pathfinder knights finished in time for the event.

Thanks for the write-up and 'grats on the placing. The army looks great too!

It’s been a lot of work but am glad it came together in time for the tournament.

The news that Twilight Kin are getting two new unlocking units (gladestalkers being one) is welcome news. 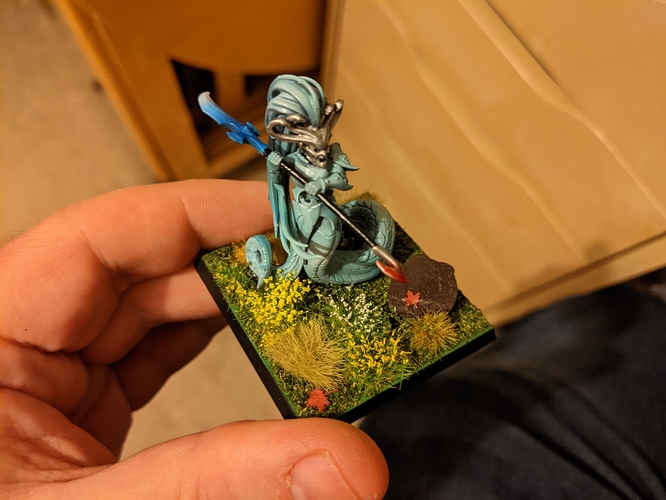 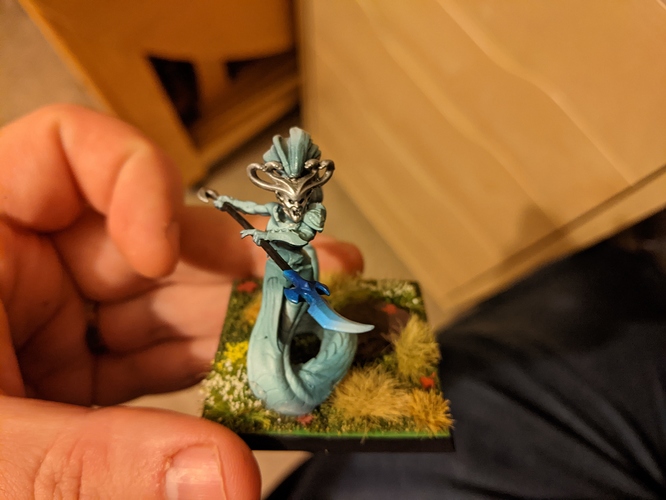 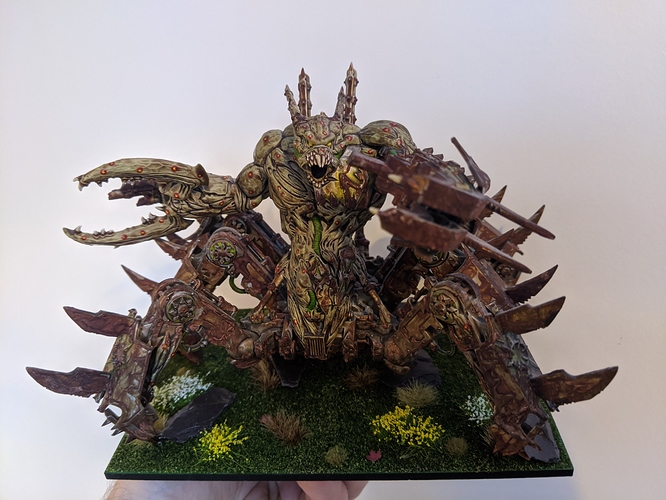 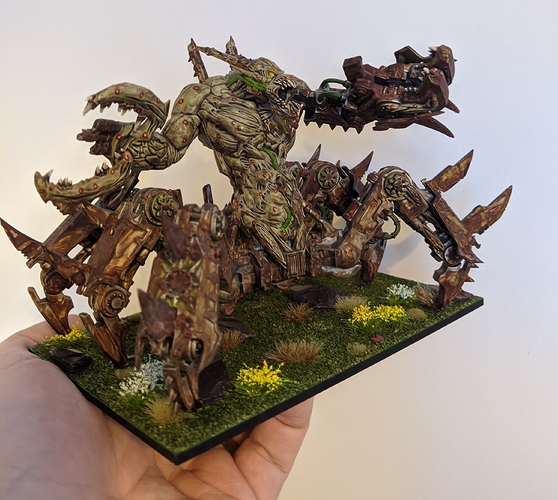 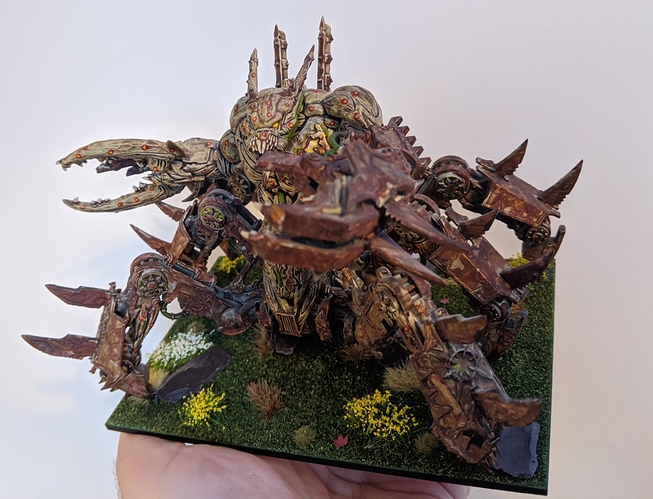 Rebased a couple of fiends to use as dreadfiends and finally got round to also rebasing the soul grinder which is a stand in for my Varangur army (horde of fangs).

Cheers. I’ve got two in the army painted up now.

Just a great kit, so am looking forward to using both in the army. I’m thinking of running two fang hordes at my next tournament.

In order to do that I’ll have to re-base the rest of the army. Might be the inspiration/motivation needed. I’ve got a few Nightstalker units on the to-do list though. So some tough choices to be made as to which army to work on between now and the new year.

I love the blending on the glaive blade there. The blue to white looks really sharp.

Cheers. The blending was done using an airbrush. Think I’d have gone mad trying to do than with a normal paintbrush.

Was tempted to add more details to the dreadfiend models but think that the blades give a good focus point.

Glad you like the soul grinder. It’s one of my favourite models. 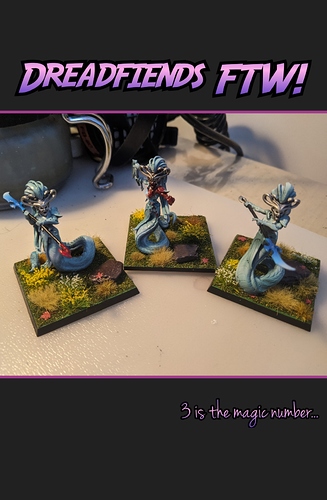