What advice would you give a new player or someone trying to improve their KoW game?

Mine would be: ask yourself how you are going to win.
What are the units you have going to do to get you a win? Think on this as often as possible, at least at the beginning of every turn.

Interesting topic! As a new player who played only 2 games so far, I’m intrigued to read people’s replies.

A lot of rank & file games are won or lost in
the deployment part of the game. I’d point new players to learn the different types of deployment the strengths and weaknesses associated with each.

Also, how to trick an opponent into thinking you are going for one deployment type, when you are in fact doing a different one.

Do you have any handy links or a short description of deployment types for the thread?

A few things I can think of

One of the first things I was taught when my club switched to KOW from WHFB was, if you have a unit in a situation where it’s going to die in combat, maybe because its chaff or up against multiple hammers or forced to give up a flank, ask yourself where you want it to die - or rather, where you want the enemy that kills it to be afterwards. It seems simple but this is one of the foundations of chaffing, of piece-trading and of generally controlling the other army with your own, even when you’re slower or weaker or don’t have ranged attaks to rely on. (Spoiler: It’s good to have some speed and some strength and some ranged threat as well

Here is a quick rundown of deployment types.

Refused flank, deploy your forces on one flank. Use scouts to trick your opponent into spreading their force. Then move your scouts with their free move back to the main force. Idea is to only face off against part of your opponents force.

Horns of the bull, strong anvil in the middle and fast hammer blow units on the flanks.

Castle, if you have a hill in your deployment area, put artillery on it and surrounded it with missile units and a few combat units to challenge any enemy units that survive.

Staggered, deploy with units forming a staggered line, with anvil units at the front. They take the impact, the units that are to the side and behind can then charge the enemies flanks.

I’m sure there is a lot more, but those are the ones that come to mind.

Castle, if you have a hill in your deployment area, put artillery on it and surrounded it with missile units and a few combat units to challenge any enemy units that survive.

Wasn’t there a guide line that there shouldn’t be hills inside deployment zones in general, to avoid such an early advantage? Or am I thinking about unofficial house rules here?

It used to be very valid in 2nd ed at least. You can still make a point that since war engines are so good in 3rd, those should also not be allowed to deploy on a hill either. But shooting is worse in 3rd overall (apart from war engine spam) so it might not be such a big deal to allow a hill on one side for instance, to make an interesting choice when choosing sides.

Unless the other side of the table is great for another reason, it’s an obvious choice, not an interesting one.

Wasn’t there a guide line that there shouldn’t be hills inside deployment zones in general, to avoid such an early advantage? Or am I thinking about unofficial house rules here?

I don’t recall who recommended no hills in deployment zones off the top of my head. It’s fairly self evident god idea and everyone I know plays it that way though.

Had a look at the set up rules and there is no such rule. It may be a house rule? 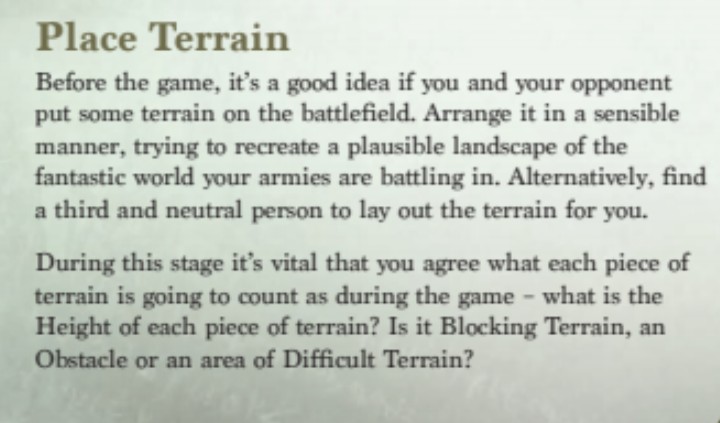 It is fine if both deployment zones have a hill. Sometimes a general can’t choose the battle field that they do battle on. Can really help encourage a player to learn and adapt their abilities.

I don’t recall who recommended no hills in deployment zones off the top of my head. It’s fairly self evident god idea and everyone I know plays it that way though.

Quite sure it was one of the guiding principles of the Epic Dwarf maps, which a huge number of us use. And which I’ve heard criticized fairly often while watching streamed games these last months. FWIW, I’m a huge fan of the map generator and support it wholeheartedly for 3E, though I do agree with calls for folks to not be afraid to modify them with their own terrain pieces when able - don’t just call that graveyard you’ve got a water feature because ED says you need one, treat it as height whatever difficult; don’t just ignore the trees on top of your hill because ED has a barren hill, treat it as both a hill and a woods.

only real issue i’ve seen with the EpicDwarf map packs are groups that use a ‘minimalist’ approach towards the footprint of each of the terrain features.

Keep an eye out for nimble/corkscrew charges (which will always catch newer players out).

Ideally, have deployment plan in mind for most general scenarios (esp the predetermined counter ones/control) and try to avoid simply trying to counter what your opponent does.

Also have (at least some) idea of what to do in preparation for those snake eyes moments - they happen to good players as well, but don’t seem to screw their plans up as much!

To add to @Stonehorse deployment options can i introduced you to the patented ‘refused centre’ tactic(!). Twist really on the refused flank/horns tactic and does what it says on the tin - is quite fun if you have pikes/spears/ensnare which can negate cavalry wings. [Did it quite a lot with infantry heavy KoM in v2, in which the only stuff in the centre were war engines and a warbeast]

I’ve only played two games so far but loving myself I find I’m using many of the tactical tricks I used for Warmaster. Well supported battlelines and never losing sight of the bigger picture. I have to admit to playing for enjoyment more than to win, eg if I think something will be fun I will try it, whether it’s tactically sound