to keep me motivated I thought I’d share my latest project. I have been collecting Orcs and Goblins since 6th edition came out and have always been a fan of the green horde. Over the years my collection grew and I have had several playstyles during the different editions of Warhammer. Naturally I wanted to play something similar when I moved to Kings of War in the end of 2017. As soon as I noticed that my green horde would have to be split up I decided to go for an Orc-only army as the latest versions of my Warhammer army mainly also consisted merely of Orcs only.

Time flew and when 2020 came to an end I had to build a Goblin army. Most models were simply lying around and had nothing to do… And you know how bad it is when greenskins don’t have anything to do.

This is my fifth KoW army and probably the last… Well, we will see…
They are meant to be some tribe somewhere on a group of islands, eating each other and everybody stupid enough to come over.
I surely am not the best painter or even photographer but I try my very best so please, be kind but also enjoy. 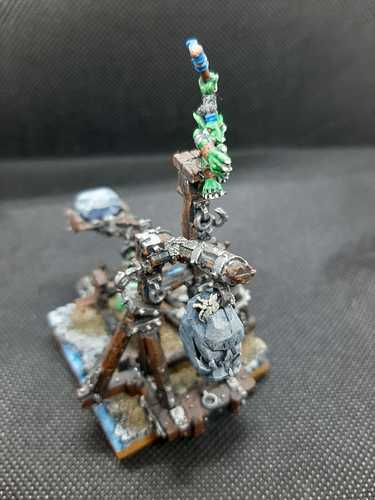 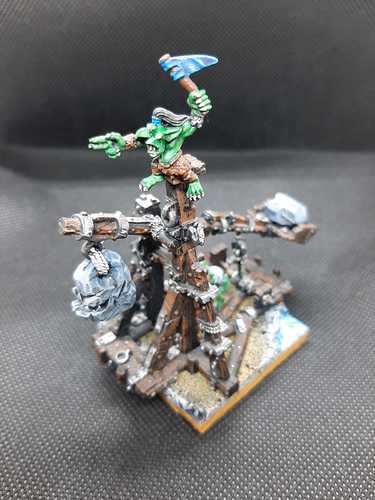 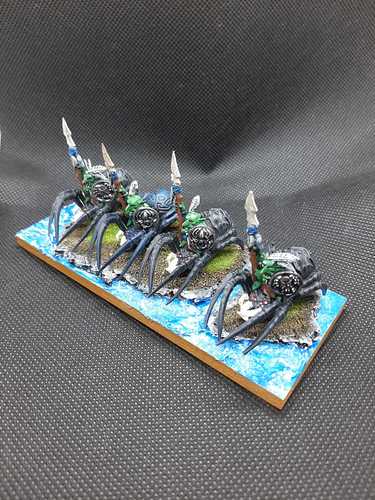 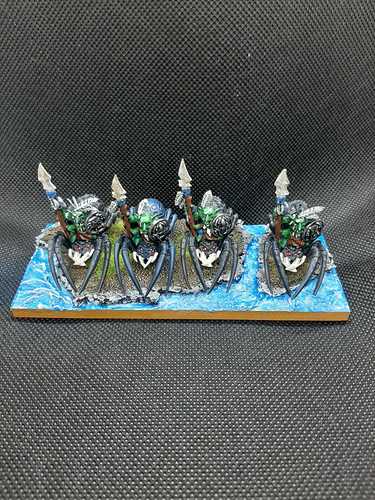 Welcome @Smoodo your old spider riders look far better than my old things and were always sweet sculpts, and that rock lobba looks proppah!, not like the puny catapult Mantic model. Something that throws boulders should look proppah!

Thank you. I just saw your goblins and must say those are fantastic, too!

Next is the first completed horde of Rabble 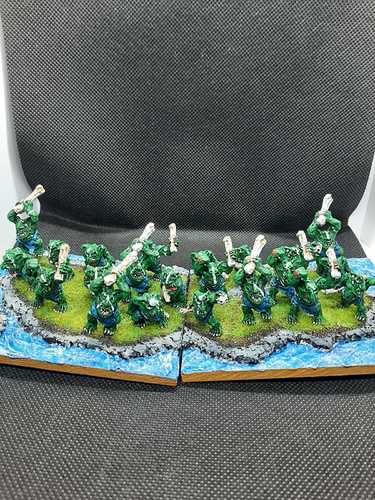 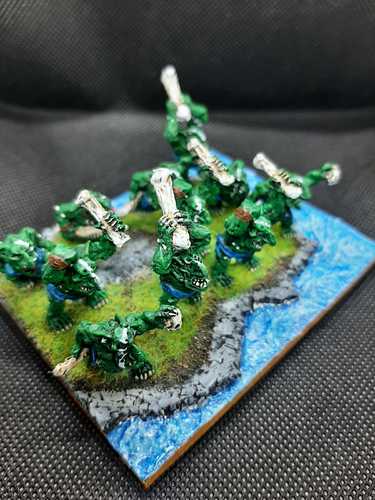 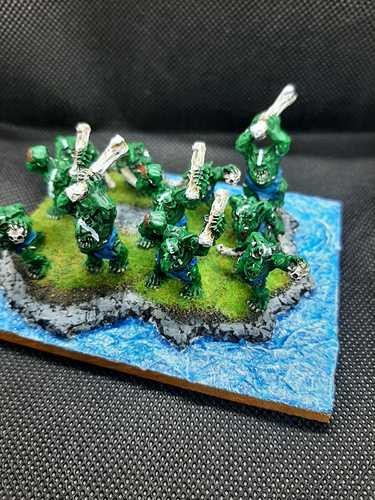 I just haven’t figured out yet where to include/put it. Actually my plan is to include a giant skelleton somewhere in the ‘ocean’.

I’d agree with @HouseElf, i’m loving the concept of the islands and it ties the units together nicely, and gives them a unique feel.
i know from my own ships over the years, how much fun seascapes/waterscapes can be to make up
The skeleton giant sounds interesting.

I just haven’t found one yet

I have been trying to get a Winggit from my miniature dealer but unfortunately they couldn’t come up with supplies from Mantic. So I had to improvise and build one myself. The same thing happened to the Mawpup Launcher. So here you can see my interpretations ofthose two units for my savages. 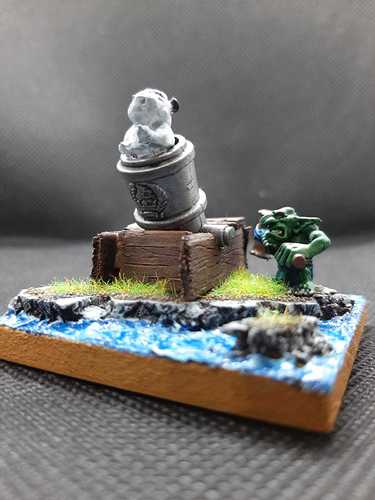 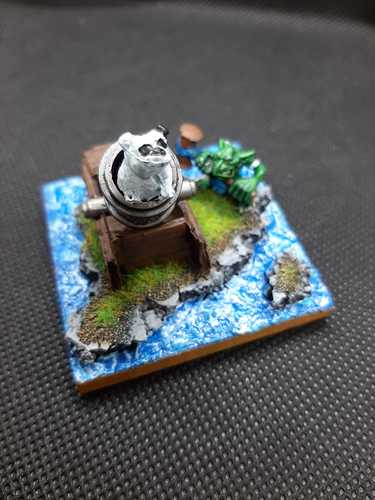 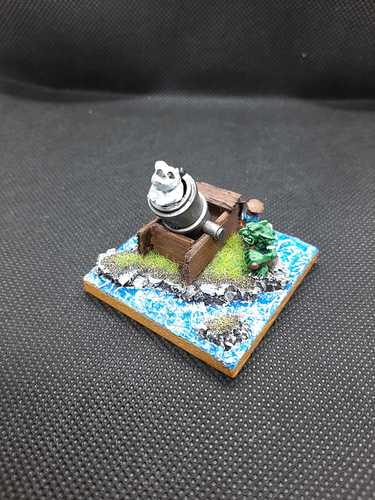 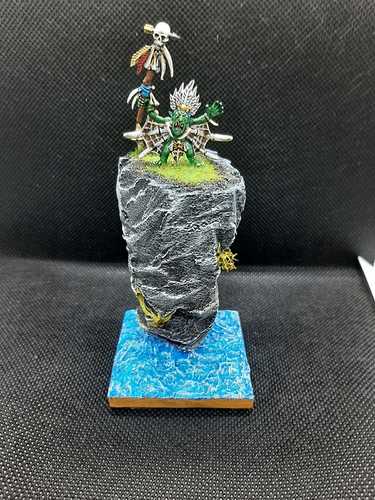 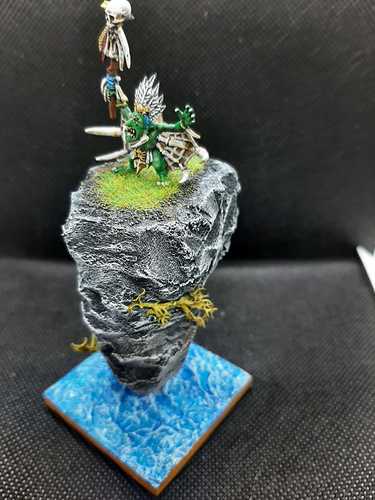 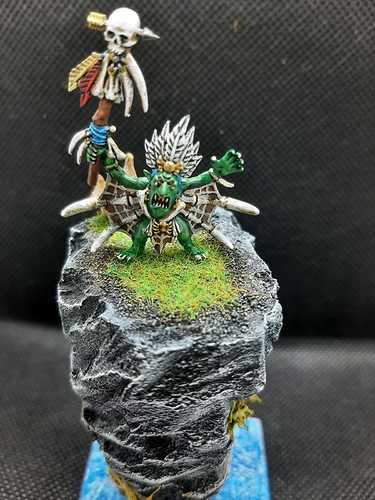 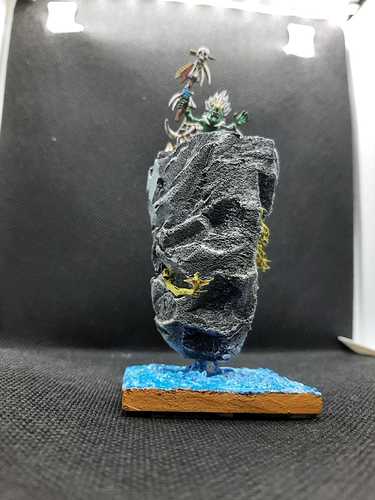 love it! i’ve ordered two Great Eagle LOTR miniatures from GW to make Winggits wth after two months of waiting for Mantic to do a batch, and no timescale for when they are avaible… i also made a couple of mawpup launchers as i had an old Ork and dwarf cannon lying round

I want them eventually and the giant throwing more of them.

Actual Mantic wingits would be nice as well though as they look fantastic.

I wanted the Goblins to be a tribe on somewhat lonely island, so a chopper would be a way too mechanic model.

And because of that I used a big fat worm for my first Mincer. And the second troop of riders. 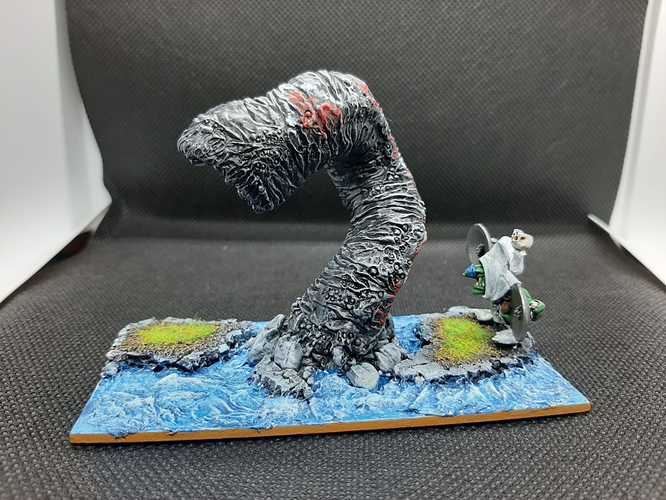 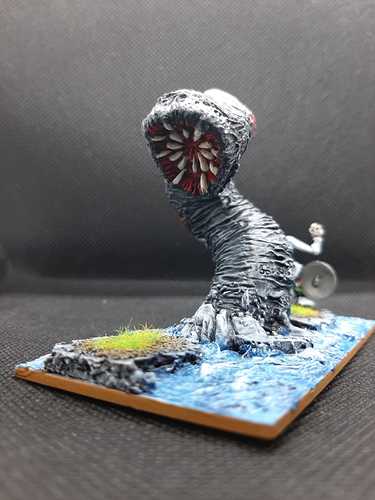 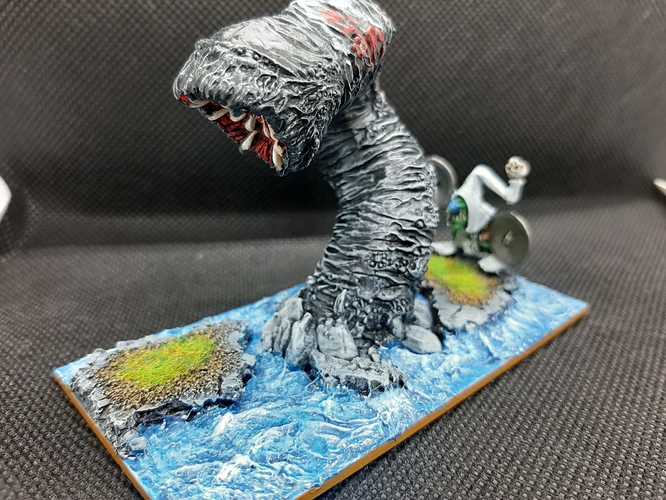 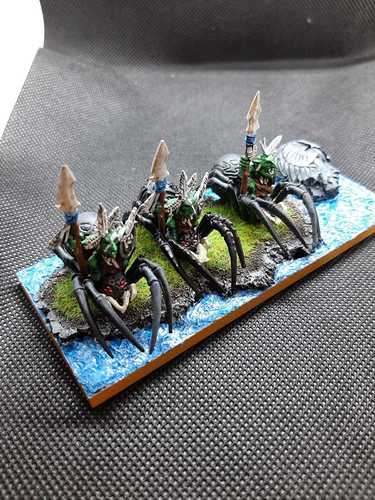 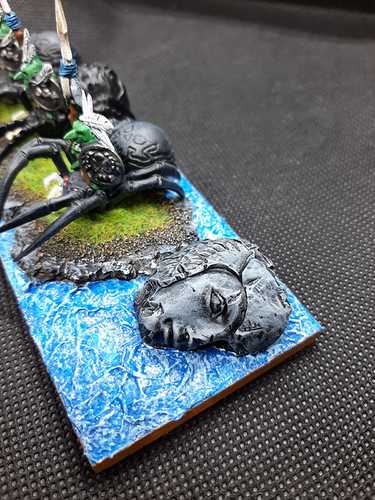 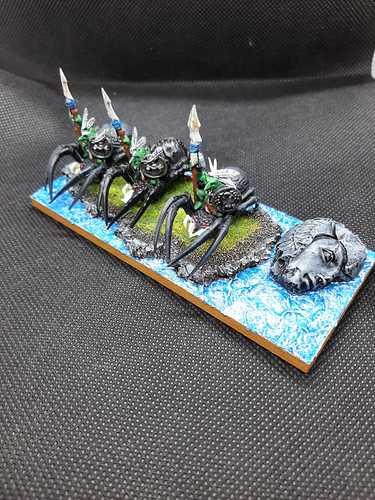 I wanted the Goblins to be a tribe on somewhat lonely island, so a chopper would be a way too mechanic model.

Understandable @Smoodo. Most of my own are Forest Goblins, which is why i liked the Giant Eagle option, taming the beasts of the woods, or at least wrestling them into reluctant submission… if successful. hehehe

That worm is seriously evil looking, the goblin with the cymbals must’ve draw a very short straw!!

I think there always has to be one in Goblin society. This time it was this unlucky little fella.

Last week I was able to smack paint on some miniatures and I wanted to share those too.

This is the first half of the second horde of Rabble. I used Shieldwolf Miniatures forest goblins, as they really matched my imagination I have in mind of my Goblins. 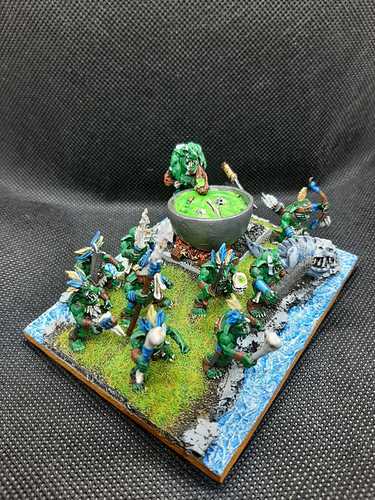 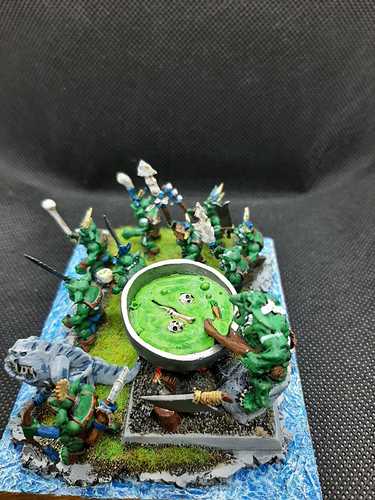 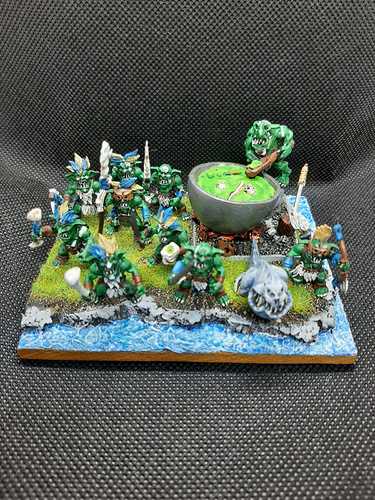 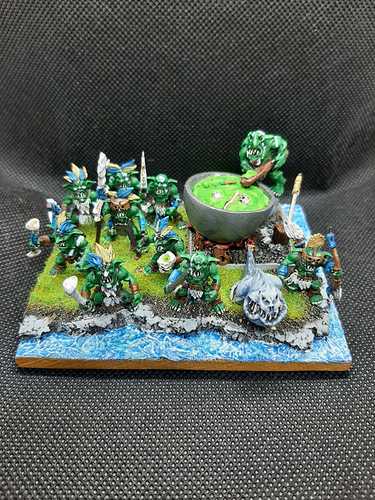 Oh. And I haven’t uploaded my Blaster yet. So here ist is: 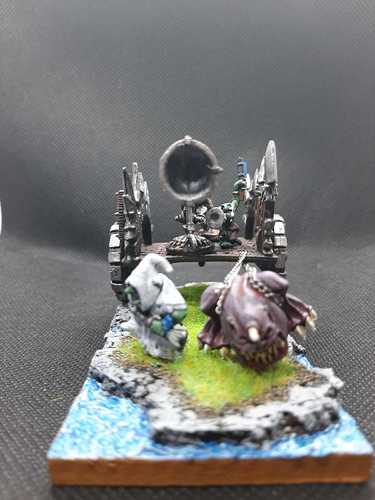 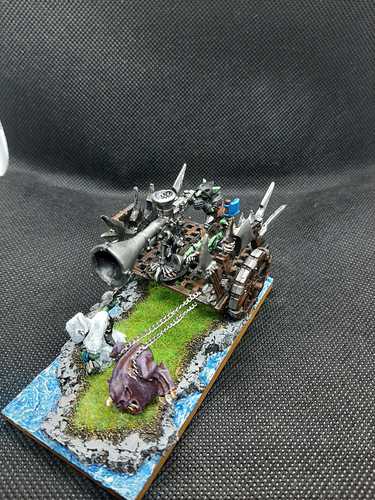 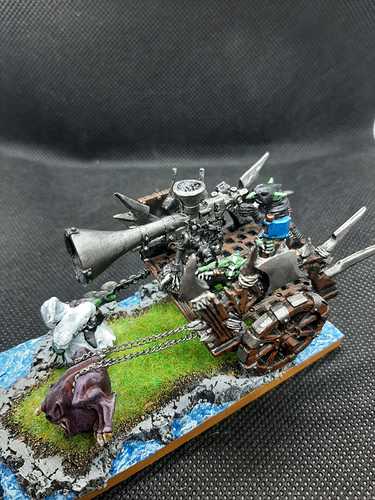 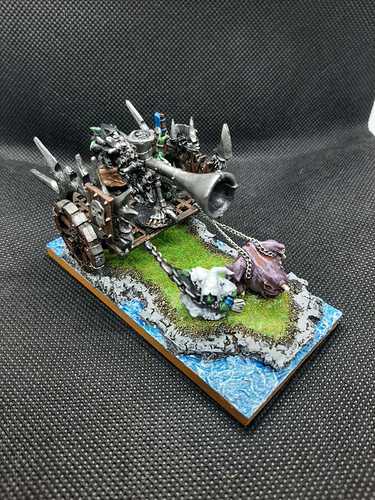 They are both so cool. I love the rabble with the bubbling pot of something nasty! That is such an imaginative unit.
The blaster conversion is pretty special too tbh!!

Thank you very much. The Blaster was fun to build and fun to paint.