This is likely to be a vaguely meandering army construction blog than anything really resembling a showcase for the time being!

Have a few ghoul units to finish for my undead before approaching the next project, which has been given a nice kick by the mantic halfling news.

Basing & paint scheme is aimed at fitting in with some other Fireforge stuff I did for a KoM/Brothermark army (so works both as LoR and whatever the new halfling army looks like).

Models wise, have a couple of boxes of the wargames Atlantic halfling infantry, some TTCombat pig riders (and a couple of the war machines), some bits and pieces from black tree (emu riders, a bard etc) and a paymaster from Westphalia. The mantic stuff looks good, should scale OK (see chef with frying pan) but not entirely on point with others. 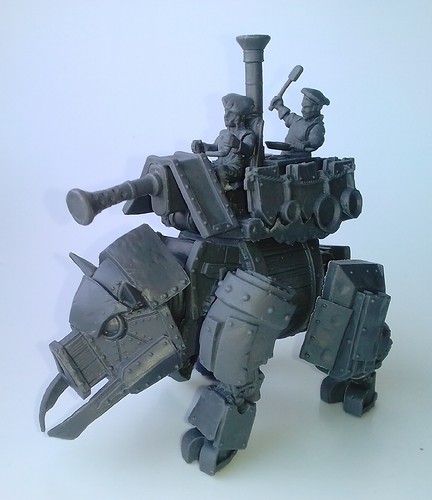 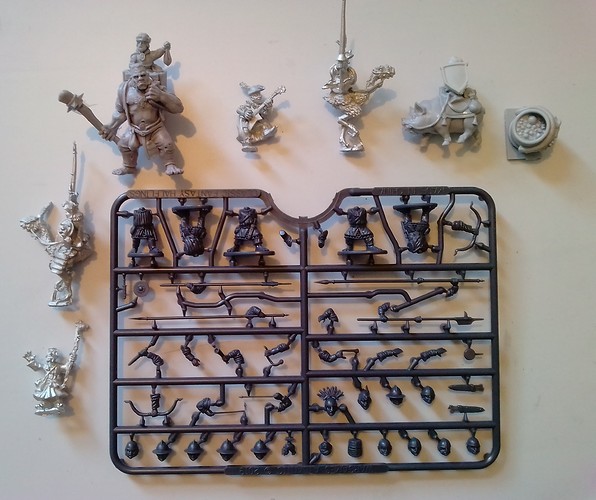 you can’t beat a meandering army construction post to watch how it grows.
Loving the wee bard and chef. The chef reminds me of the Halfling bloodbowl team

How did you get the chef out of the Iron beast?!

the freezer is the easiest way superglue is very brittle when frozen and makes removing things easy and painless.

Dumped the Iron Beast in the freezer over night and removed a couple of side panels and the cook with knife/pliers. It’s ‘boardgame’ standard plastic so OK to do without really ruining detail

fabtastic - I will try it

That halfling Angus Young is AWESOME! Who do you say is making it, Black Tree?

Yeah, in this range:

So with Wargames Atlantic having a sale (oops - couple more boxes bought!) and the latest preview pics from Mantic regarding the halfling release, have finally cleared a slot in the hobby schedule to start on this lot

8 models to a troop gets me 10 regiments worth of various stuff from the WA stuff(!), with the mantic stuff providing the more specialist units. Hope there are also suitable units for some of the fun looking stuff that TT Combat has (child slingers, couple of variant cav etc), while a swarm of some kind will mean I can use the 32 chicken models from the WA sprues!

i do love the idea of a Halfling army, and i’m sorely tempted to start one.
The topic inspired a short story…

He studied the ‘Wanted’ poster critically. The artist had captured his likeness nicely:- His flowing, windswept mane of hair, piercing blue eyes, strong cheekbones, square jaw. His body, well-muscled, chest: criss-crossed with old scars, above his fur trimmed, leather loincloth and sturdy calf high boots. His halbard was seen jutting over his right shoulder, and his right arm was thrust skyward in an heroic pose, sword flashing in the sunlight. The artist had even captured the bejewelled hilt and Elven runes on the glistening blade to perfection.

It had cost him a small fortune to have the posters drawn up, and distributed throughout the land. Still, a mercenary needed a good reputation.

Squinting, he read the words slowly, out loud.

At the time, the artist had raised an eyebrow questioningly at the word: ‘Cutthroat’, but Hrin’s crusty sidekick, Vrick, had explained how most of Hrin’s foes died.

“First, dey getz hamstrung, ya see, wiv da sword of 'is,” Vrick explained with a leer, “Den 'e slitz dem from ear ta ear!” The deed was acted out with a grimy finger across his throat and a gurgling gasp of dying breath.

The artist paled, nodded, and included it.

Only now did Hrin spot something in the background of the picture, vague, but visible nonetheless.

Unbenownst to Hrin, probably after Hrin had left the studio, the artist had sketched in a bar stool behind Hrin, to give scale to the picture.

The stool’s seat was level with Hrin’s shoulder.

As he peered even closer. Hrin spotted a big fat mouse, underneath the stool, just to bludgeon the point.

“I’ll gut that sneaky watery-eyed bastard!” growled Hrin, but it was too late now. The posters were even now being distributed far and wide, and the artist had probably caught the first ship leaving the docks.

Hrin gave him a hard flinty look, and Vrick’s laughter died away. Vrick knew when to poke fun, and when to shut up. He’d seen that look often enough, usually just before blood was spilled.

His companion was tetchy at the best of times, meaner than a rabid sewer rat, and the halfling could be pricklier than a hedgehog if he thought anyone was disrespecting him. ’ 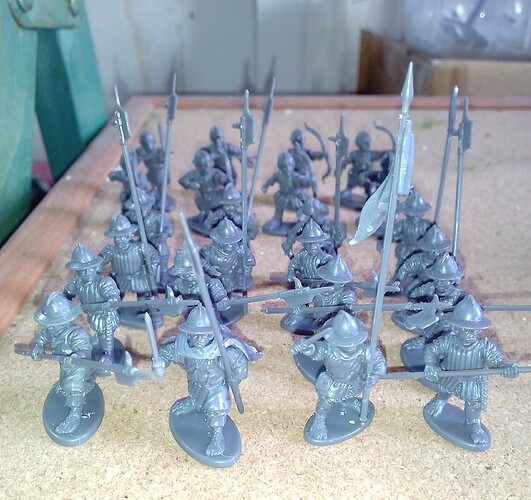 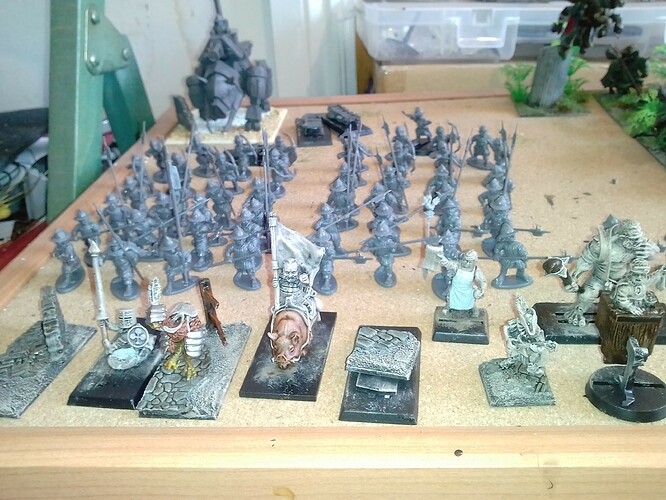 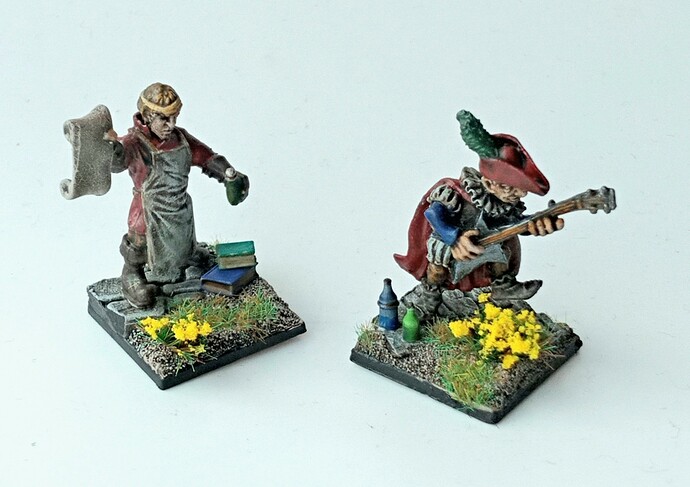 Next up is finishing the build of the first half of the WA plastics (3 reg of the spear/halberd guys, 2 reg archers), some initial basing work and have started some basic painting of the iron beast

Start of the basing 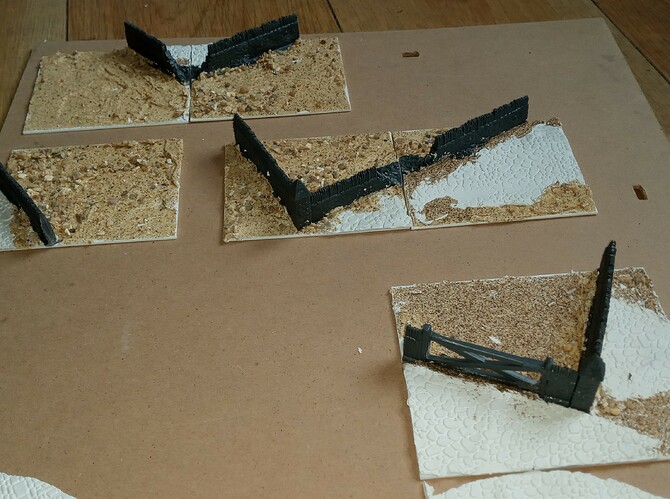 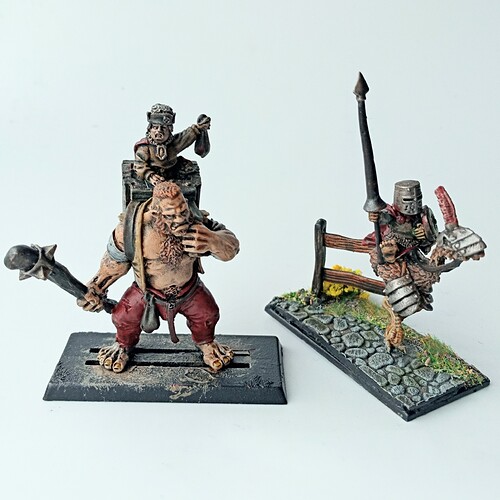 Really need to start on the infantry!

Right, I will start on the infantry … soon!

LoI Iron Beast - swapped one crewmen out, the other has a head swap. 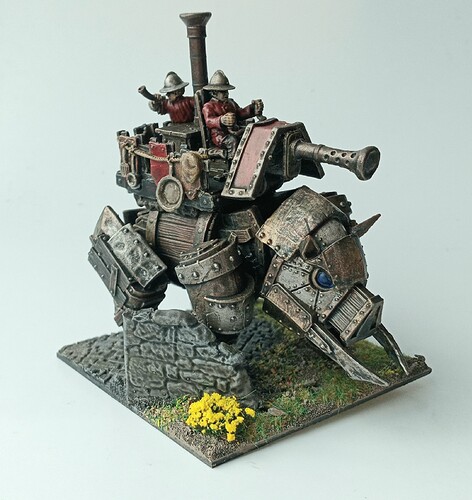 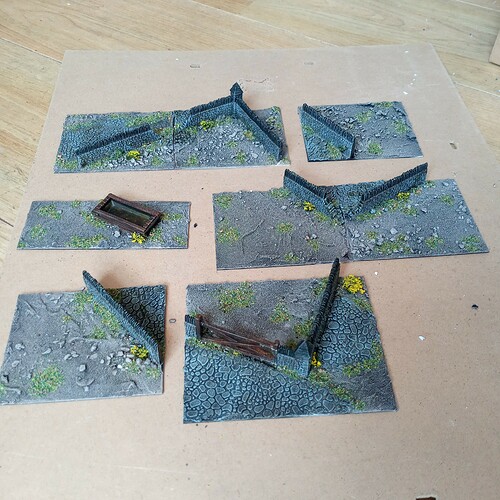 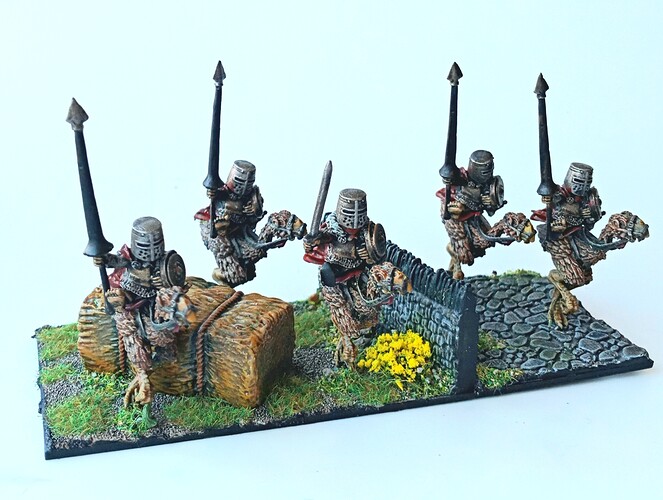 Emu cav cracks me up, so characterful. 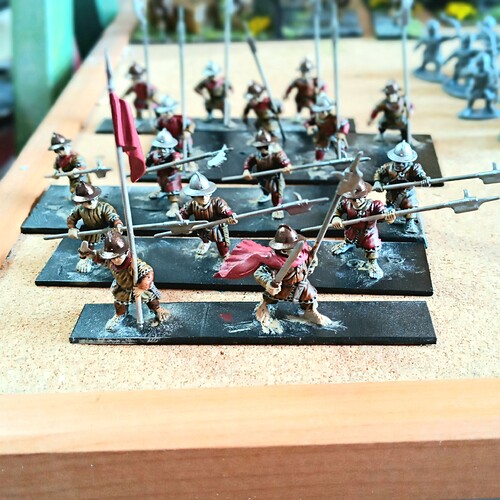