I’ve started work on my fifth army, a Free Dwarf army.
I’ll admit, I’m not overly fond of Mantic Infantry Dwarfs as a whole, those flat headed helmets wreck my head. I do, however love the brock riders and Berserkers. I used to own a 2000 point Dwarf army for Warhammer before it slid into oblivion, and loved the Giant Slayers.
With that in mind, i have ordered some models. i would have liked to buy locally, and support Irish game shops but i couldn’t find what i wanted, so i ended up ordering in USA.
Here is the initial units i bought:
West Wind Dwarf Wars: Imperial Dwarf Infantry(10)
West Wind Dwarf Wars: Imperial Dwarf Makadon Infantry really like these guys
A regiment of Mantic Brock Riders as new
Another regiment of Brock Riders which for some reason was cheaper,

and Sveri Egilax Lord on Hellbrock
and a Dwarf Berserker Lord.
Oh, i forgot to add that i already have a regiment of Mantic Shieldbreakers that i’d bought for my Northern Alliance army

I hadn’t realized that the infantry were only troops, and not full regiments, I’ll have to either buy more or blend them with some Oathmark Dwarfs or Mantic Dwarfs

Yeah the oathmark dwarfs look good, 30 in a box too it’s good deal, have you seen Atlantis miniatures? They have a nice dwarf range, they’re a bit expensive but they have monsters and things like mammoths and war beasts that might be worth it. It’s a kickstarter i forgot to add that.

thanks @coOk_pAss_BaBtridge . I have seen the Atlantis models. great for kings ect, but too expensive for core troops . The Oathmark are good value for money and sweet models to boot. Sods law, now that i ordered some Dwarf Wars miniatures from USA , i found the UK site which are far cheaper. So i might order extra from there to build regiments, and then add a few Oathmark into a horde or two.

are you going to be giving them blue face paint?

Oathmark are great. I’ve got them all except the miner/light infantry box. Heavy infantry is one of the best miniatures kits I’ve built in years.

Building and painting Avatars of War dwarfs at the moment. Well worth a look as well. Super large range in plastic and lots of metal character miniatures as well.

@MithrilCoyote warpaint is certainly in the plan. I have Savage Orruks with blue warpaint, and my nekkid horde of fanatics.

@Niall78 those Avatar Dwarfs are excellent thanks. Just what i was hankering for.

And perhaps some sort of model to represent the Gonnagle. 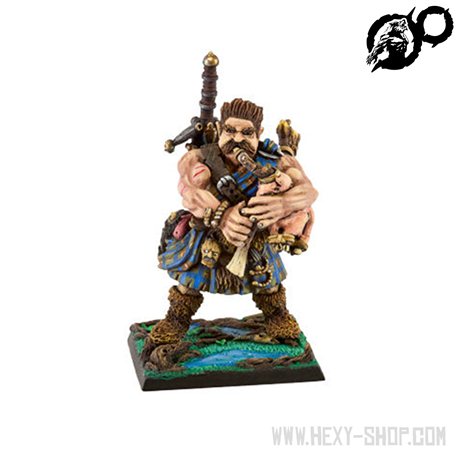 or this wee lassie…from Atlantis 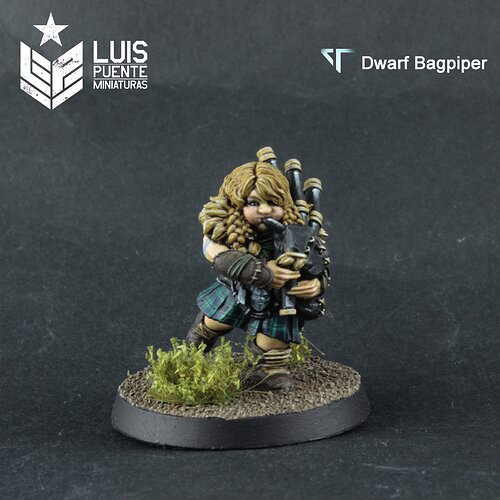 i ended up picking the wee lassie piper. It comes with Standard bearer and Scribe Loremaster too 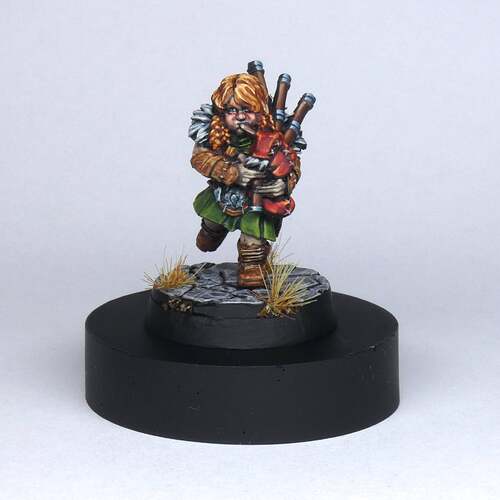 My first dwarfs arrived yesterday, and the Dwarf Wars IImperial Dwarf Legion and Makadon Infantry troops went straight into warm suddy water to clear any residue off them.
This morning, i started glueing the big long lances onto the Makadons (very weird bases on these btw) . Next job is te shields.
Here lies a problem. The shields are tiny.
The Imperial Guard ones are like Barn doors. So i’m considering swapping them around. With Lances and big shields the first unit would look very Roman Legion -ish, while the others look more like Ironclad with hammer and buckler shield.
An issue arises when trying to fit them into the rules. The Legions would be very like Bulwarkers, but Bulwarkers are not included in Free Dwarfs… so do i play them as allies, or what? any suggestion s? 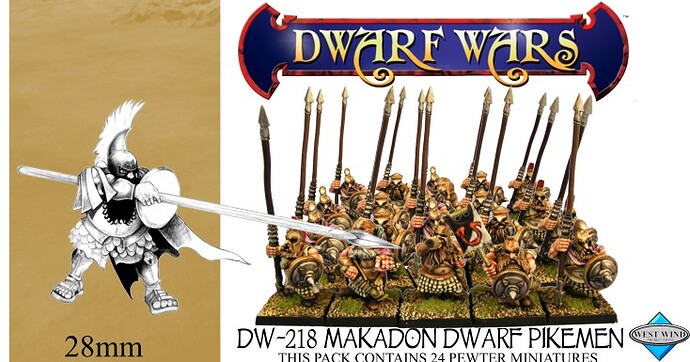 There aren’t too many de5/6 units with spears or pikes - most tend to be de4. Could use as spear levy with dragonshard shield?

many thanks @Sceleris . i gather that small bucklers is the norm for long spears as they require 2 hands to wield effectively so i stuck with the original design.,

My Dwarf Berserker Lord on a Brock, (Sveri Egilax on Hellbrock (work in progress as base needs a bit of work still) 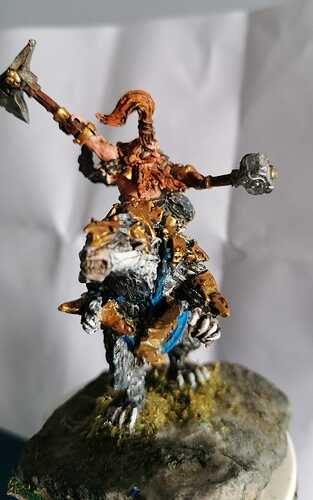 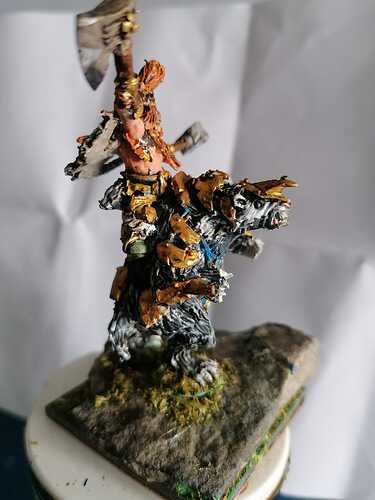 That is one angry looking badger! Appropriately so, of course. Very neat. 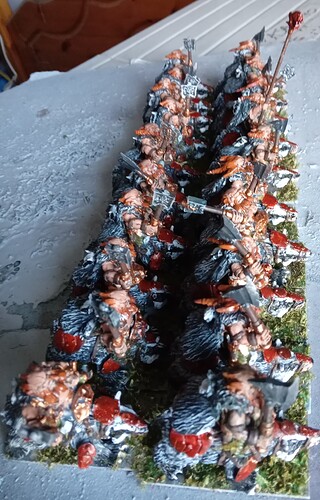 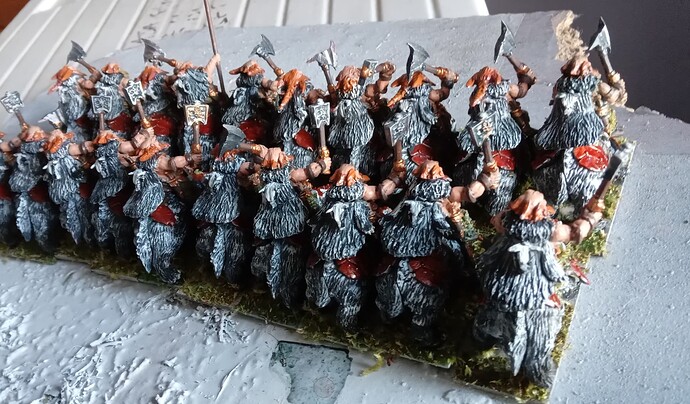 In the end, i decided to switch shields on the 2 units from Dwarf Wars i bought. So for Free Dwarfs, their would be a phalanx of spear levy, or for Imperial Dwarfs, a troop of Bulwarkers, and then a unit of Ironclad.
I’m awaiting a delivery of supplies including 2 Army Painter washes to finish off the features, as the only wash i have left is a green one which worked fine on the kilts and cloaks, but not the nekkid dwarfs skin or mohicans/beards. 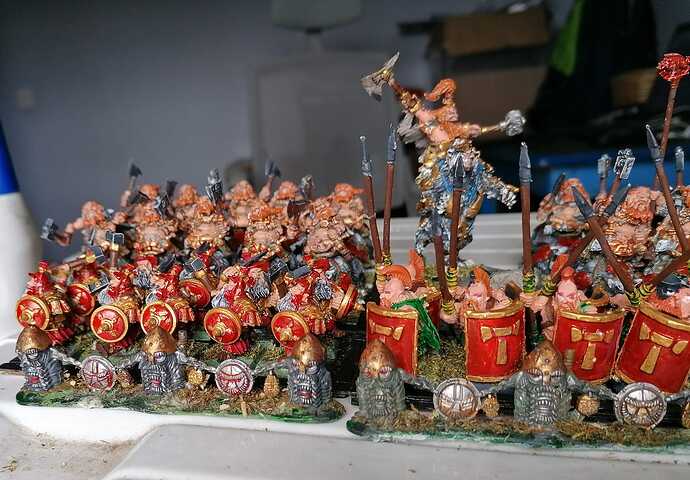 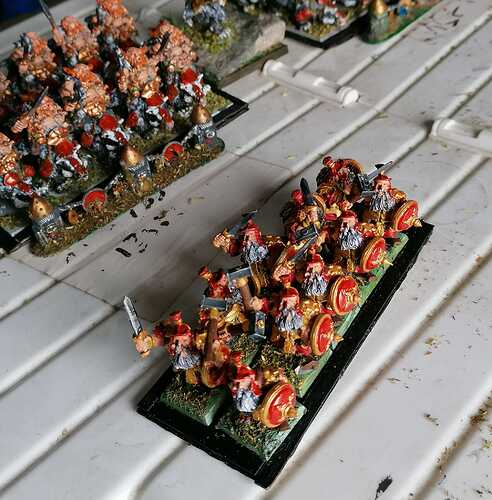 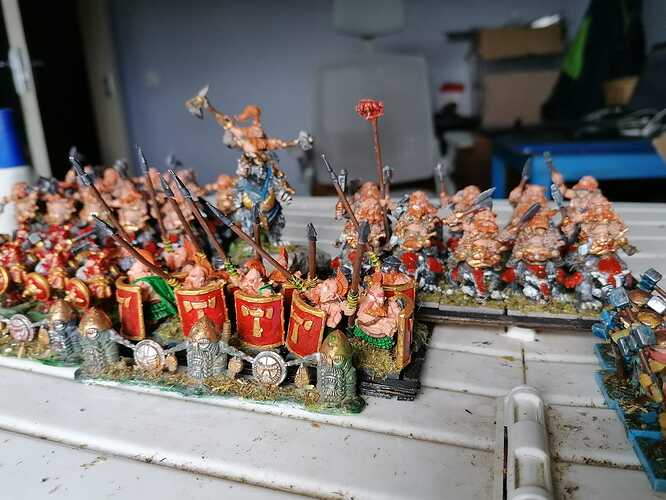 I have the 4 additional characters left to paint, ( A berserker Lord on foot, A Battle Standard Bearer , A geeky fellow with books and scrolls, ( Runelord or Stone Priest ) and my female Dwarf Bagpiper, which i have no idea what she can be? :- along with a regiment of Hammerers/Shieldbreakers in need of a repaint.
Then i have 2 cannons and 30 Oathmark dwarfs for Bowmen/rangers/Quarrelers