When Uncharted Empires came out for v2 a few years back, I had this vague plan to make an eastern style KoM/Rhordia list, having acquired a box of Gripping Beast Arabs and some other random bits and pieces, including a whole bunch of tombking shields.

A few units got built, along with a variety of odd heroes, but nothing really constructive. A different style KoM army, dwarves, abyssals and Varangur force (now NA) all got done instead.

A combination of an army building FB group, the pubs shutting and @Swordmaster painting thread inspired me to dig them out again and do some more for it.

It is by no stretch of the imagination a historically accurate army(!), I’d built stuff with no real plan as to whether it will work on the table but it’s been fun so far.

More camels, halflings and a pike horde (Warlord Macedonians) will join the weirdness! 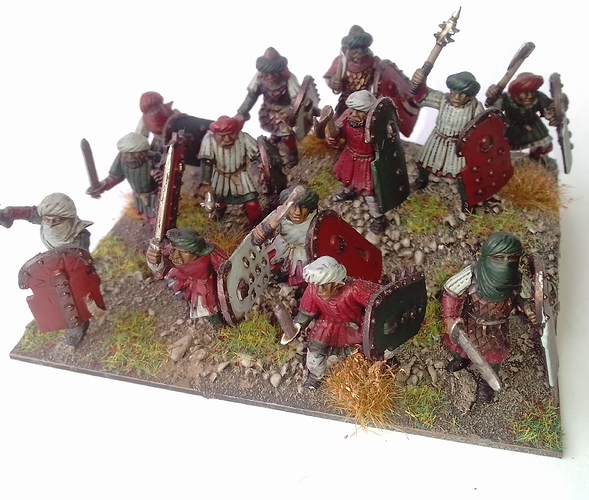 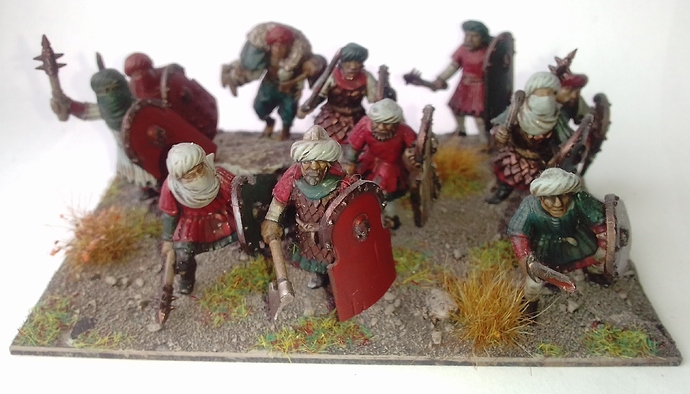 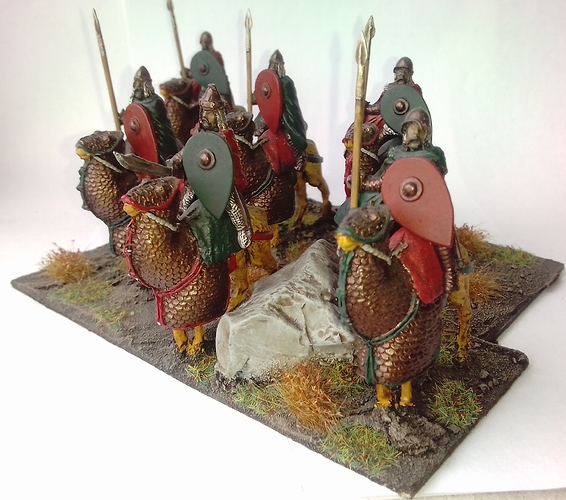 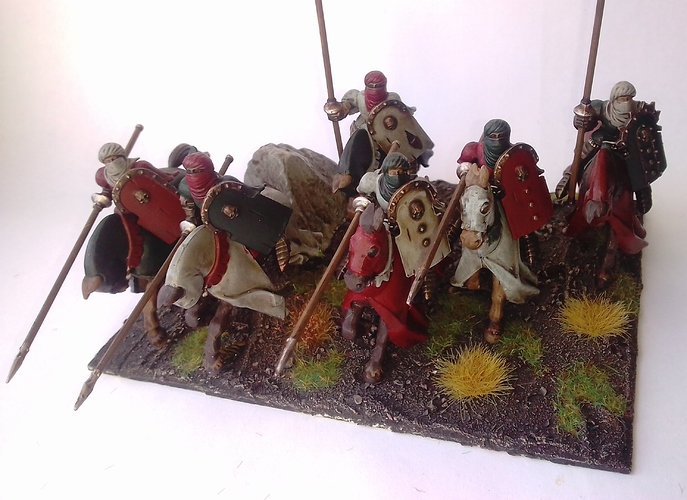 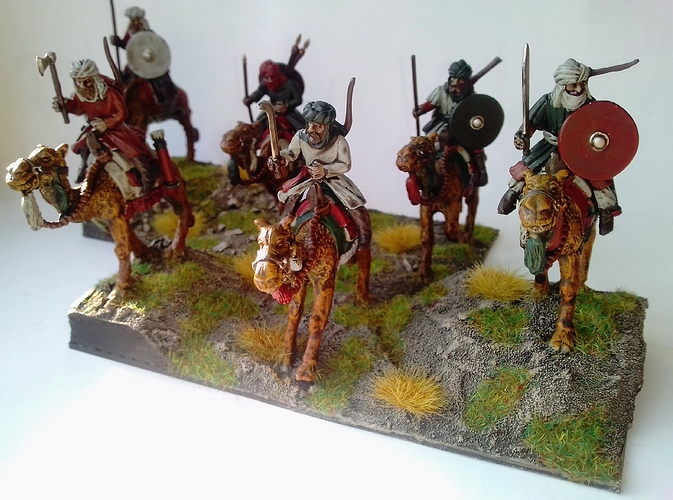 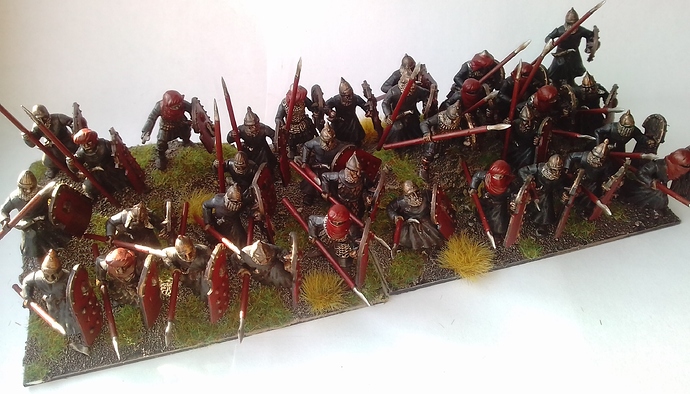 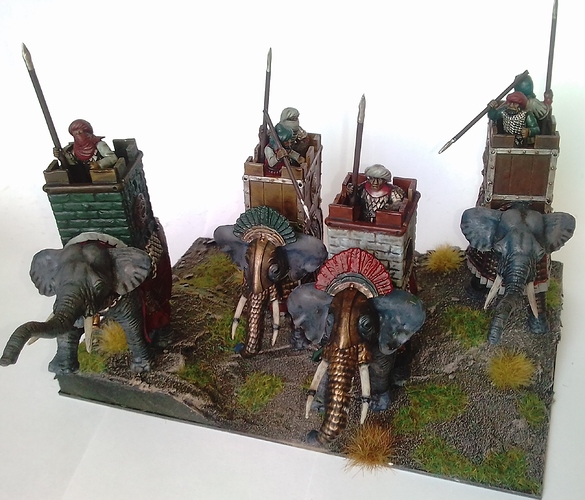 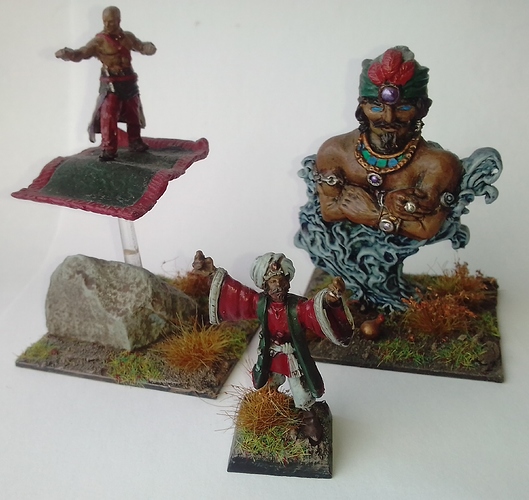 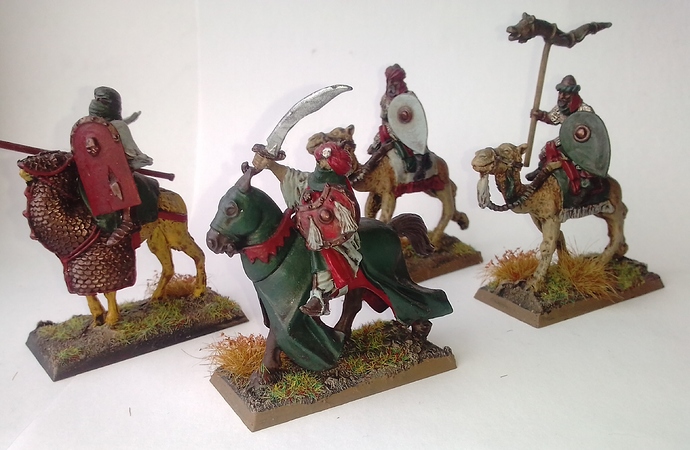 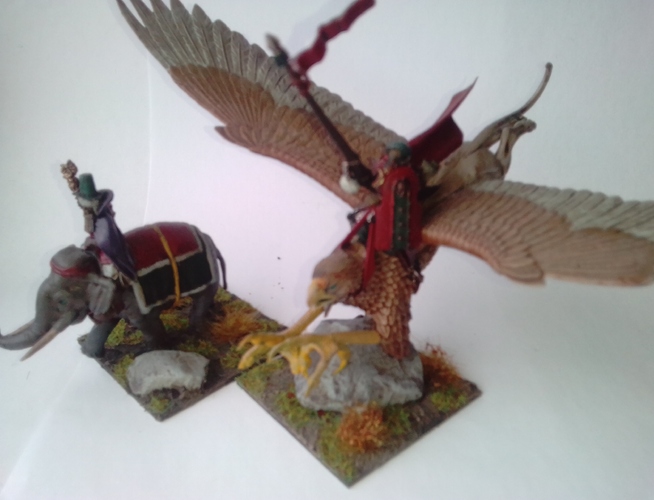 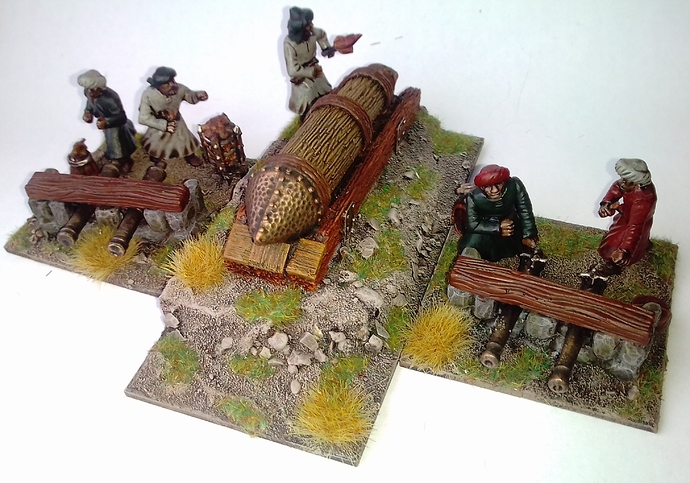 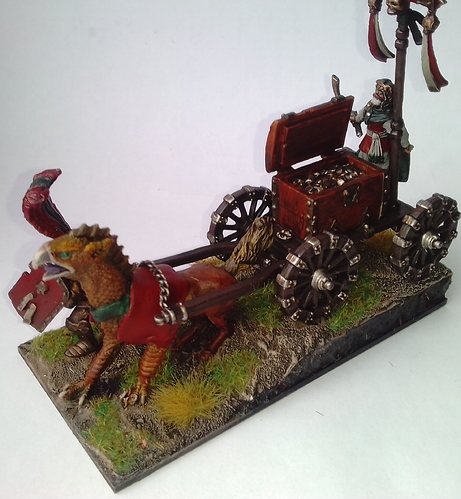 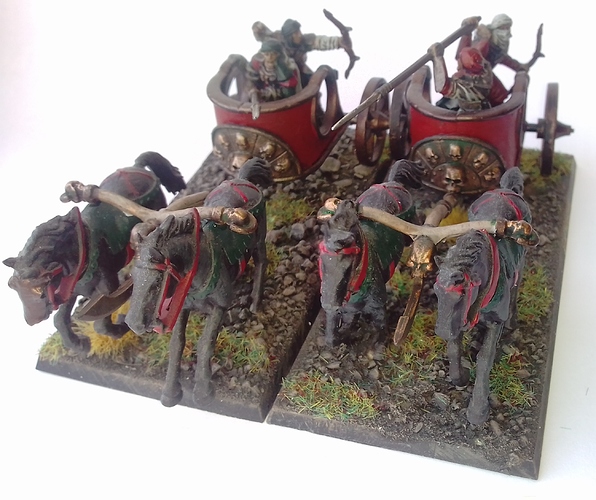 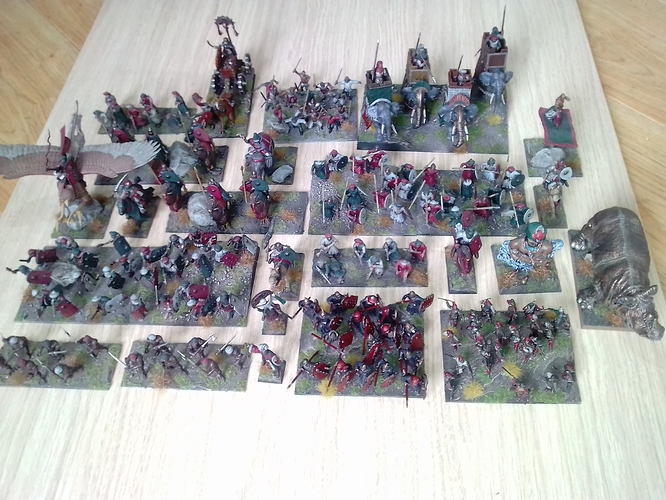 Absolutely wonderful force. Is that a Hippocampus I see? Guess that is a stand in for a Mammoth, some very nice bits of kitbashing there. Hope it does well, and look forward to seeing the force grow.

Its a plastic toy rhino! Was painted metallic colour from when rhordia had the Iron Beast option, plus it fits with that sort of animated construct feel of the old Sinbad movies! 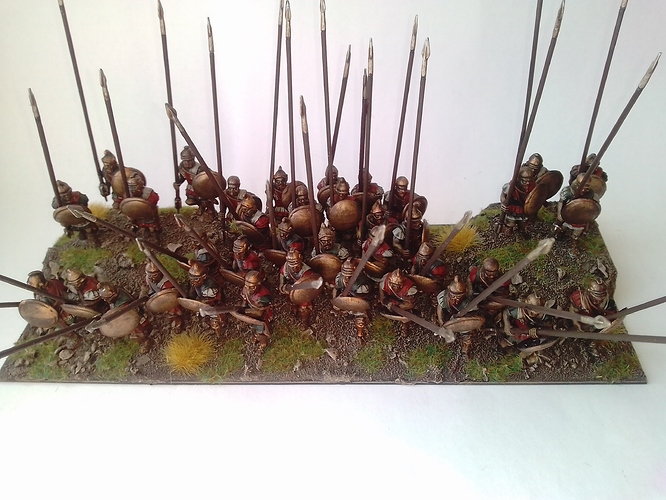 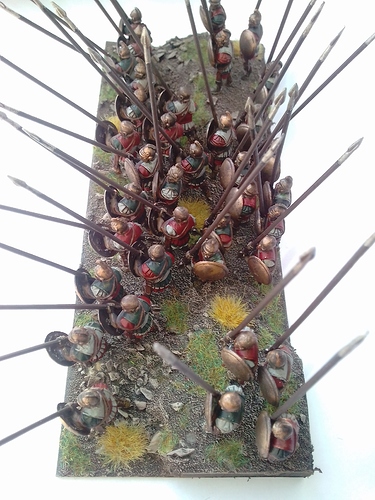 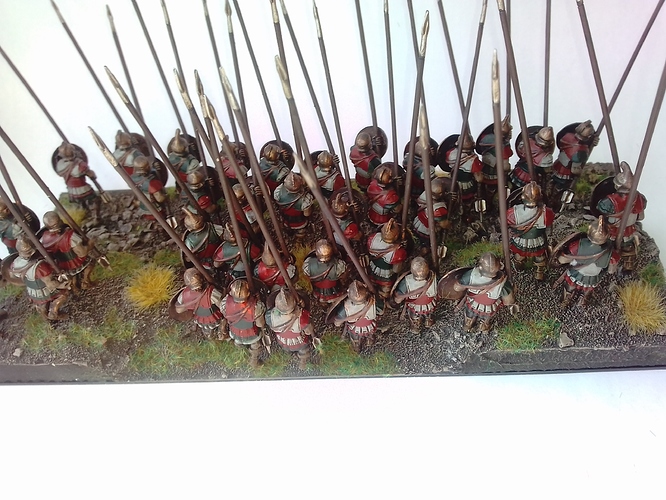 Plus the next wip units - more camel riders 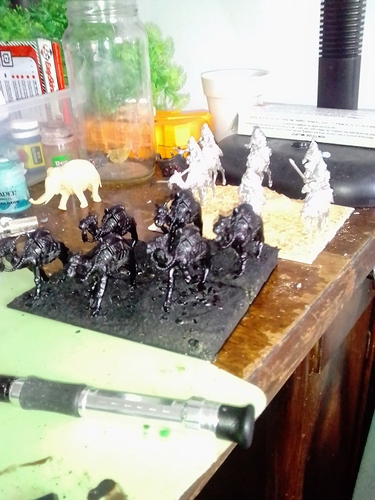 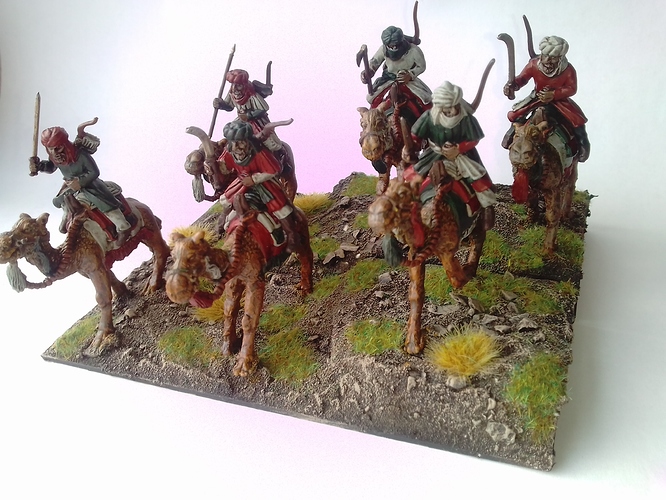 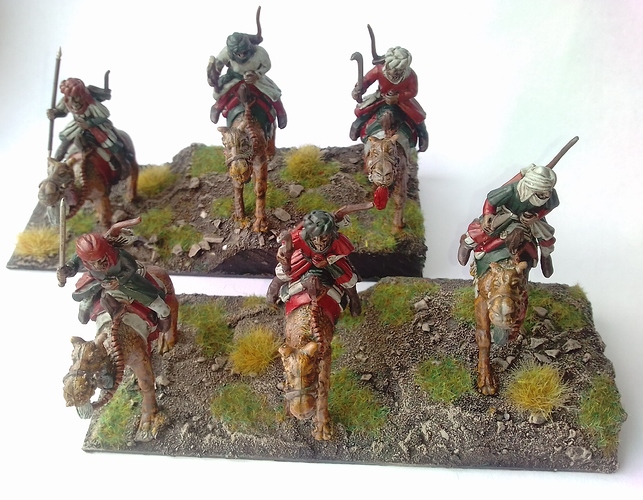 Giant done. Its a cyclops from the Massive Darkness game, which fits the theme fairly well (think Sinbad etc). 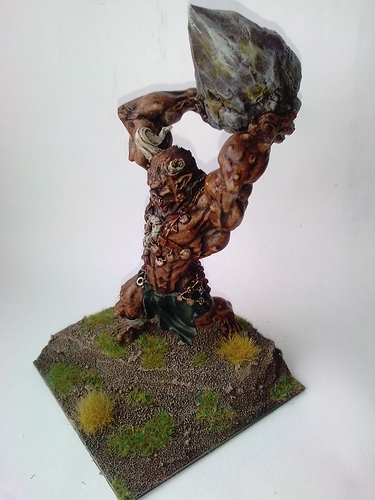 The army looks great and I love the ‘Arabian nights’ theme.
Your battle shrine alone has caused me to wonder if my KOM army should migrate to Rhordia so they can have one!
It’s great that the kings of war game allows people to use their imagination to create wonderful armies of unique models. Reminds me of the original Warhammer back in the mists of time. Oh I’ve got all nostalgic

Cheers. Been fun putting together as I just find/convert anything that is vaguely Arabic, reasonably consistent paint job and go from there!

Adding a few rhordia bits (or similarly basilean/nature for the brotherhood split) is a nice way to expand an army. Just ordered wargames Atlantic halflings and some warlord erehwon stuff to add to another of my KoM armies!

Final lot of camels (for the time being!). 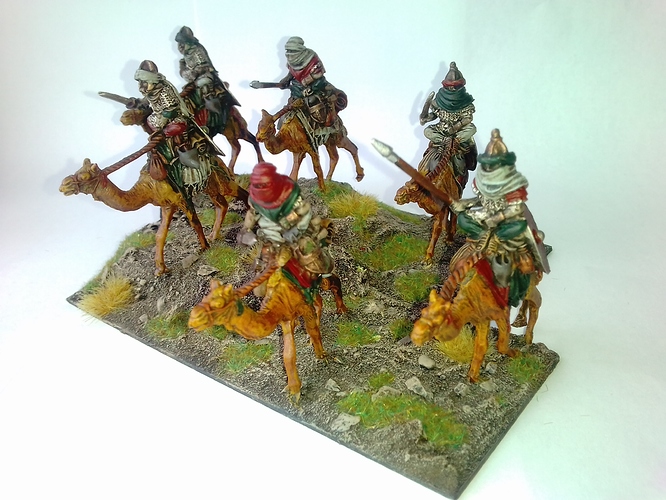 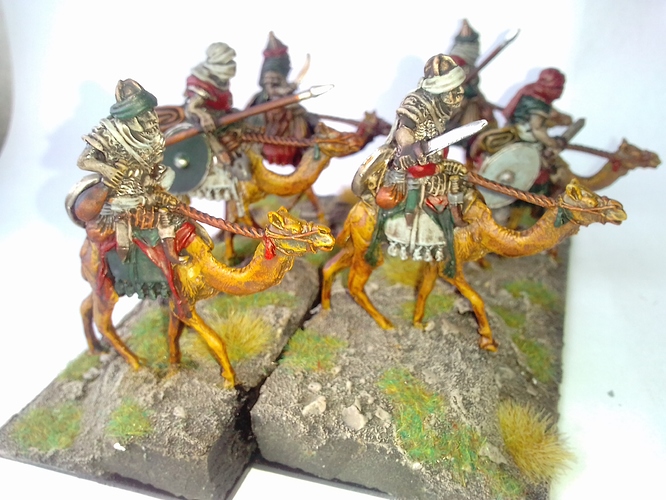 I’ve recently painted a bunch of GW haflings from the ‘80s and so for some cavalry back up was looking at the warlord haflings mounted on pigs and goats which I think look great . Not seen Atlantic before. Trying to hold off buying anything until I finish painting my back log, but my will power is waning 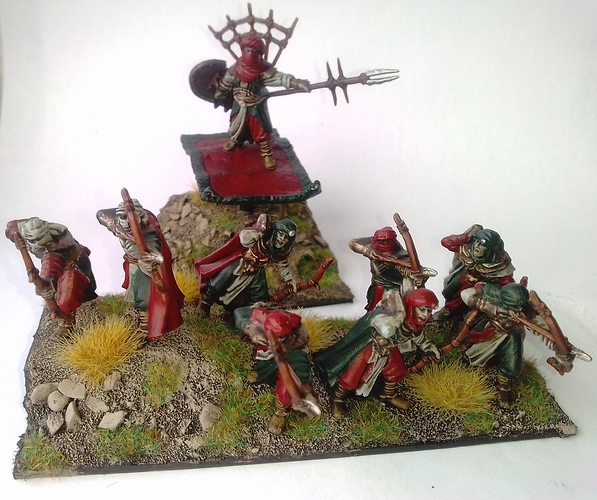 Just the half-troll crew for the mumak left to do - otherwise calling this done for the time being. 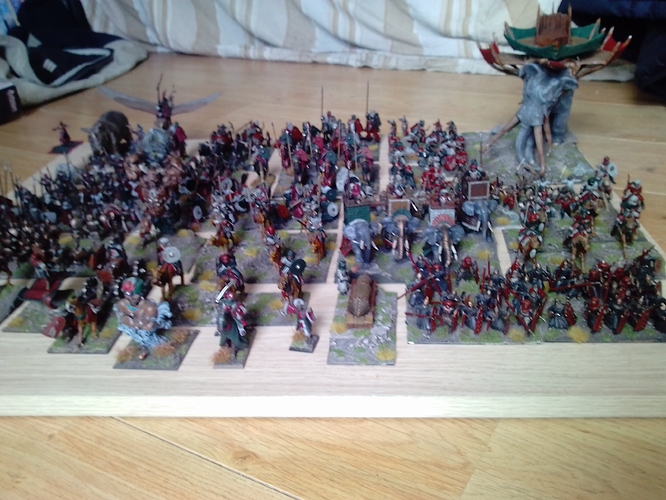 Fantastic looking army. How many points is it? Also - That Mumak is an absolute beast of a model! presumably that’s a mammoth (on steroids)?

Its about 5k with upgrades, items and heroes etc.

The mumak is going to be run as an allied chariot legion - ogres probably since 25 me3+ attacks with cs1, tc2 and brutal seems fitting! Using half troll crew who look fairly unsubtle

I thought it would add up to a fair number: 5k is nice and huge. Now you just need to find a suitable sized battlefield and opposition. Haha
Great idea about it being the equivalent of a chariot legion. I really need to expand my imagination