I’ve been slowly working on a LoR army with a theme around the Spanish conquistadors. As this is taking so long, I’ve decided to start documenting it in an effort to speed up my snail-like progress.
First up is an extension to my regiment of pikes. The starting point is the WFB 6th edition spearmen and halbardier figures plus some metal morion helmets and pikes: 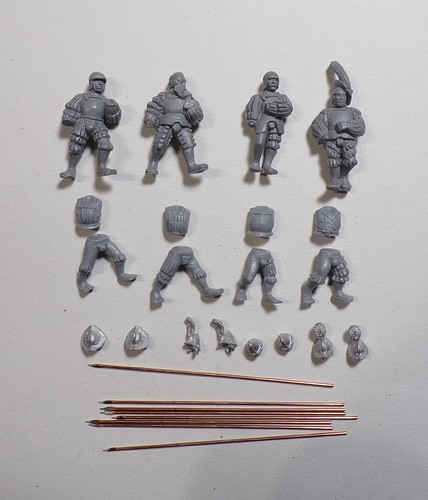 The build is quite straightforward. To start with, everybody gets a new hat and hair transplant using green stuff. The weapons are then cut away from the hands and the hands the drilled out to take the spear shafts. The bodies are assembled as normal except for the two front rank figures. These have the torso tilted forward and the legs re-positioned (left leg bent, right leg straight) to show the figure leaning forward. The figures are then glued to individual based on alternate sides so they will rank up:

Next step, clean up and priming, which I hope to get done in the two next weeks.

Where were the helmets from?

As an FYI, Wargames Atlantic will be releasing a conquistador kit in the not too distant (hopefully) future.

Thanks @Sceleris.
The helmets came from Maxmini several years ago. I’ve just checked and they now do full conquistadors heads, which would have saved me some time.
The Wargames Atlantic previews look very nice and, if the size is OK, I will be using these to build some footguard with sword and shield.