i’m starting my fourth Kings of War army, one with an historical mythological theme: A Gaelic/Celtic war host. There looks like there are suitable models available out there for it, although not from Mantic.
My problem is, what army force should i build my war host on? None seem to suit the theme. Ideally, i’m looking for foot soldiers able to shoot bows/slings/javelins/darts, but that can also close for combat with sword and shield, and light armour, Light cavalry and chariots, and a beast pack for warhounds, plus lots of druidic magic, bards for inspiring, or to sow fear into the enemy… heroes on foot or in chariots… maybe even the possibility of some Irish Mythological beasts: Banshees (which ironically i have models for) Oilliphéist, Balor One Eye… maybe a mixed army of Men and sidhe.
I considered Northern Alliance, Varangur, even Kingdom of Men, but ironically, the closest match is the Herd… who knew!
Given that i want druidic magic, charioteers, and unarmoured foot troops as my core army, with leaders on chariots or with battle hounds and generally a close affinity with nature and the faery folk of the Túatha De Dannaan and the early humans of the Milesians and the smaller swarthy Fir Bolg of early Irish Mythology, i’ve chosen the Herd as the closest possible army to base them on.

I’m going to be able to have fun with my Bansee models as Harpies, a Murder of Crows for Woodland critters, and maybe even a Púca as Moonfang or a Lycan Alpha.

I’ve bitten the bullet and invested in my first models: 80 Celtic Warriors from Warlord Games: Hail Ceasar… bought locally in Ireland to save the headache of Customs and Brexit right now. I’ll need to add some Victrixs chariots and Atlanic Irish to this initial buy.

Wargames Atlantic makes a plastic kit of Dark Age Irish you might want to look into. they’re a bit less “truescale” than the warlord game’s models in terms of things like weapon scale, but should look ok together.
Victrix makes a Celtic Chariot that would work for the chariots. victrix figures tend to be oversized compared to anyone else (they’re really more like 30mm scale than 28mm) but they should close enough, and you can always replace the crews with something else if they look weird to you.

Gripping Beast makes a generic “dark age warriors” kit as well as a “Dark age cavalry” kit with the same aesthetics… basically just plain tunics and few cultural identifiers. Gripping beast might be a bit small compared to some of the warlord and victrix stuff though (GB’s kits are older and a lot of ‘scale creep’ has occured in the 28mm market.)

Following on from the above comment about scale. There is a bit of variety amongst the historical stuff, but it isn’t massive.

I think that the Herd List makes a great alternative for lots of armies that couldbe considered more tribal and wild in their makeup. The basic Tribal warriors and Spear Warriors make a great core and at horde size don’t have to worry about terrain as much as other hordes.

The Minotaur Chariots will be an interesting one as they don’t seem to function much like chariots of history what with strider.

However the Herd list also has more mythological flexibility. You could use lycans or even guardian beasts to be warpspasmed warriors. I seem to remember reading something about ancient celtic heroes having warp or were transformations into almost monstrous forms…

Good luck! I’m sure your creativity and prolific output will make it work!

Thanks @MithrilCoyote, i have an order in for some of the Atlantic Irish minitures. They are excellent models and come with plenty of slingers as well as sword and spear, plus wolfhounds which will equate to the Gur Panthers of the Herd, and are a must inclusion in any Celtic army.
i’ll have to check out the Gripping Beast models, but the races of Celtic Ireland varied in size and looks, : Tuathu De Dannann, Firmorians, Fir Bolg, and then the Milesians so a mix in models size is easily excused.
The Vitrix Chariots are excellent, and although some are armoured, would be perfect for the elite ruling class warriors who can afford some armour. The only real issue is the shape of the Gaulish shields, vs the more common round shield or small bucklers believed to be prefered by the Irish warriors.

much appreciated @Sceleris. i’ve been researching the options and comparing them, but its great to see them all together like that.

Thanks @Muakhah, i had a great idea during the night regarding the Minotaur Chariots. Given that Cattle raiding was such a common pasttime, and means to exercise and hone their fighting prowess , i was thinking of using a herd of cattle, with a large Bull as the Horde of Minotaur Chariots, if i can find suitable models, (maybe Scottish Highland cattle or Longhorns, or if i’m really stuck deer,) and keep the chariots to smaller unit sizes, to balance the Strider rule. (At least it is only Strider, not Pathfinder )
As to the lycans, you are indeed correct. Shapeshifting was well known in Irish Mythology, with the hero Cuchulain known for his ‘battle frenzy’ where he shifting into a ferocious beast with superhuman strength.
Morrigan was also well known as a shape shifter, taking on many forms, washerwoman, crone, banshee, wolf+ crow to name a few.

You probably have the models you need, but this is a short term 3 for 2 on Gallic/Celtic blisters - runs until 16th

Eeeek, thanks @Sceleris . i’d be very tempted to get the two chariots, the fanatics and the Ariovistus, Germanic Chieftan looks really good too. Sadly, i just put an order in last night for 2 boxes of Celtic Warriors, so i’ll have to wait a couple of weeks before getting anything else. … or face divorce proceedings hehehe. Best to wait until she wants to splash out on something, and then casually ask… can i get a few models then?
The Victrix chariot kit comes with a sweet Druid and Boudicea model, (which will make good Morrigan/Medb/ Scáthach models too, 3 of each i believe, but i’ll need to find a Nuada Silver hand/Cuchullain and King model or to put it in The Herd terms, Great Cheiftains on foot/Centaur(horse)/Minotaur (chariot).
Scáthach might slot nicely into the Tribal Tracker slot too, or Ice Kin Master Hunter, although i’d prefer the Madriga model from Dungeon Saga from Legendary Heroes of Dolgarth, which would get me another Druid figure and Orlaf the Barbarian too… and a dwarf

Given that i live at the foot of the Sliabh An Iarainn, where the Tuatha De Danann arrived in floating ships on the Summit of the mountain, and that of all the possible armies of Ireland, these Pre-Celts might have been the ones with the powerful nature magic, they would seem the most appropriate to focus on for a Herd army. This will allow me to delve into the mythological creatures associated with the Sidhe, to find equivelants for the various Herd/ Forces of Nature units. i’ll focus on this era, or at least the era just after this, where the forces of men, (The Milesians) and those of the Sidhe, merged somewhat, when certain warrior heroes and kings were reputed to have fairy blood in them,. At least, that is the plan.

Another plus to The Herd is not only the Sabre Tooth Hunting Cat as an addition to the heroes of the army, (or in my case, Warhounds) but the fact that it gives the hero Duellist. It’s just begging for a river ford to be on the battlefield, so that the host’s heroes can fight in one on one combat at the crossin point to settle the dispute.

A few other interesting things i’ve stumbled across in ‘researching’ the army, although i’ve yet to fully collaborate them. Still, it gives me ideas for how to paint, select and structure my models.
The firsr regards unit structure, and breakig it down into troop unit size as the magical nine, (3 7 and nine being sacred numbers to the Celts ) rather than the Roman decimal system.
Also, regarding the use of armour, and the amount of colours on the figure’s clothing to represent rank and a person’s status within society. In basic terms: a warriors (the soldier caste or Ruada ,would have three colours on his/her clothing , (rather than non-free folk or peasants (serf class) who only wore one drab colour undyed wool, Land owners wore two,etc., while the poets Bards, historians, other highly skilled and learned craftmen such as blacksmiths, and the Brehon(Druids and Law givers) wore six colours to represent their high status in society, and seven colours for the (High) King, as purple dye was very rare and expensive to obtain. Also, fabrics, linen being common, but even silk ect which reflected wealth and therefore rank, as did the abiity to own armour of any kind.
So, unlike the very colourful images and historical documentation of British and Gaulish Celts, we are looking at a somewhat restricted pallet of colours to distinguish rank within society.
Starting with undyed wool, grey-white, then Brown-black wool , the third colour being saffron, and yellow tunics, (leine) commonly being of a yellowy colour, then Green, Blue, Red and finally Purple for the cheiftain/king (Ri). That should make painting interesting.

iirc there were even werewolves in Irish folklore, making the Lycans an option more or less as is. might be from a too late an era though for your army. 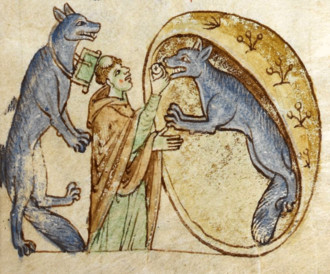 The legendary werewolves of Ossory, a kingdom of early medieval Ireland, are the subject of a number of accounts in medieval Irish, English and Norse works. The werewolves were said to have been the descendants of a legendary figure named Laignech Fáelad whose line gave rise to the kings of Ossory. The legends may have derived from the activities of warriors in ancient Ireland who were the subject of frequent literary comparisons to wolves, and who may have adopted lupine hairstyles or worn wo...

Many thanks @MithrilCoyote, yes, i was aware of the Werewolves of Ossory, and how they fit snugly into the Herd list as Lycans/Lycan Alpha/Moonfang, ad i will probably buy some of the Mantic Werewolves +Lykanis to augment my army.
Even the famous Na Fiana of Fionn MacCumhall were associated with shape shifting into wolves or hounds, and Morrigan herself was reputed to take on many forms including wolf and raven
.

Even the speed attributed to The Herd as opposed to KoM is consistent with Roman reports of the ferocity and speed of the Celtic charges , when describing the methodology of celtic warfare

While i’m waiting on my 80 Celtic Warriiors to arrive, i started by nicking the orcs off my old Savage Orruk Boar riders, and gave the hogs a bit of TLC. Voila, A regiment of Wild Boars ( A.K.A…Wild Gur Panthers) as the first unit in my Mythical Irish Herd host 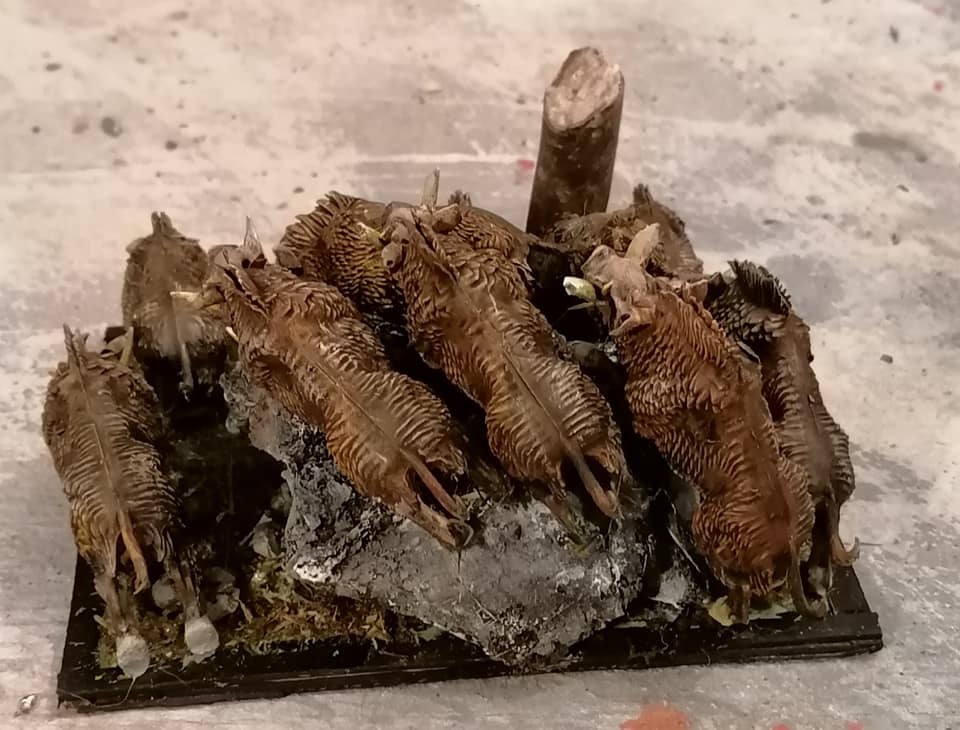 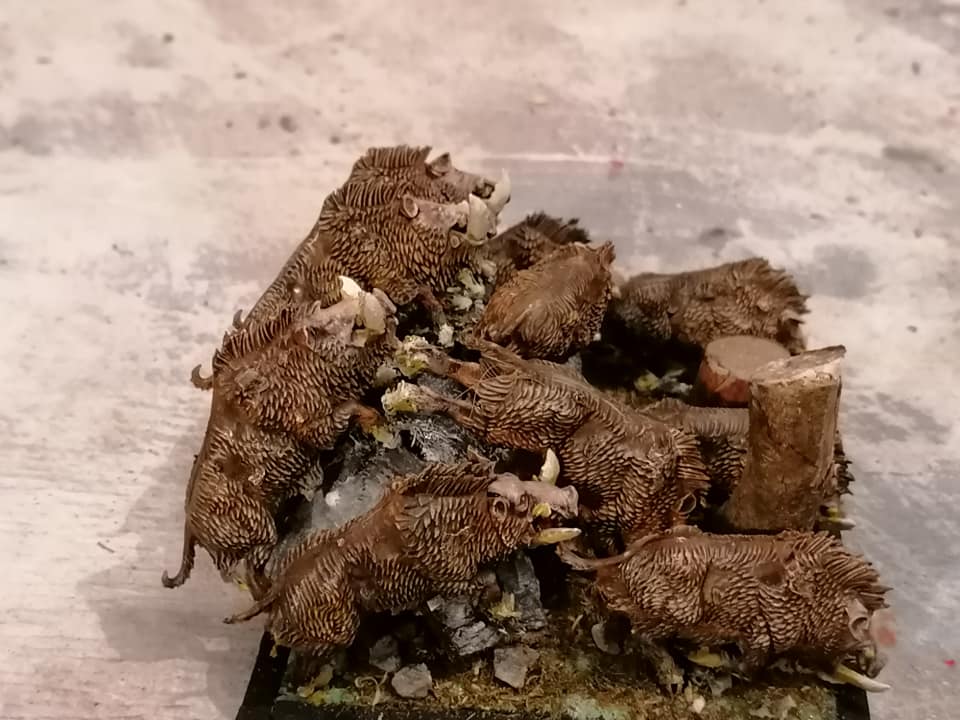 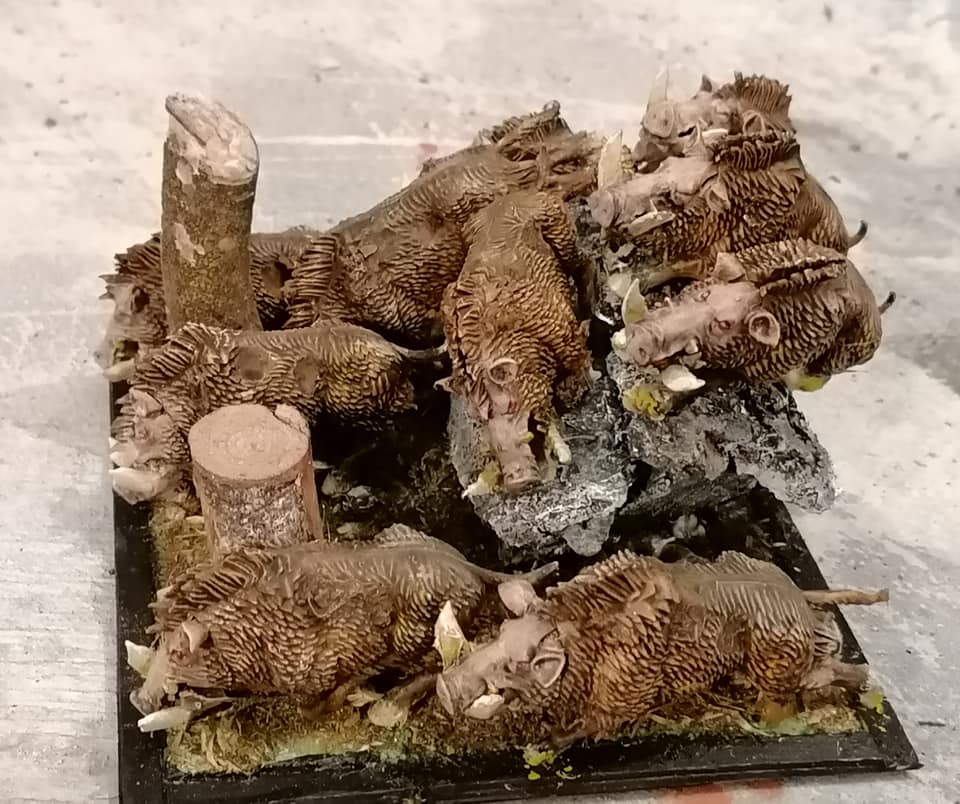 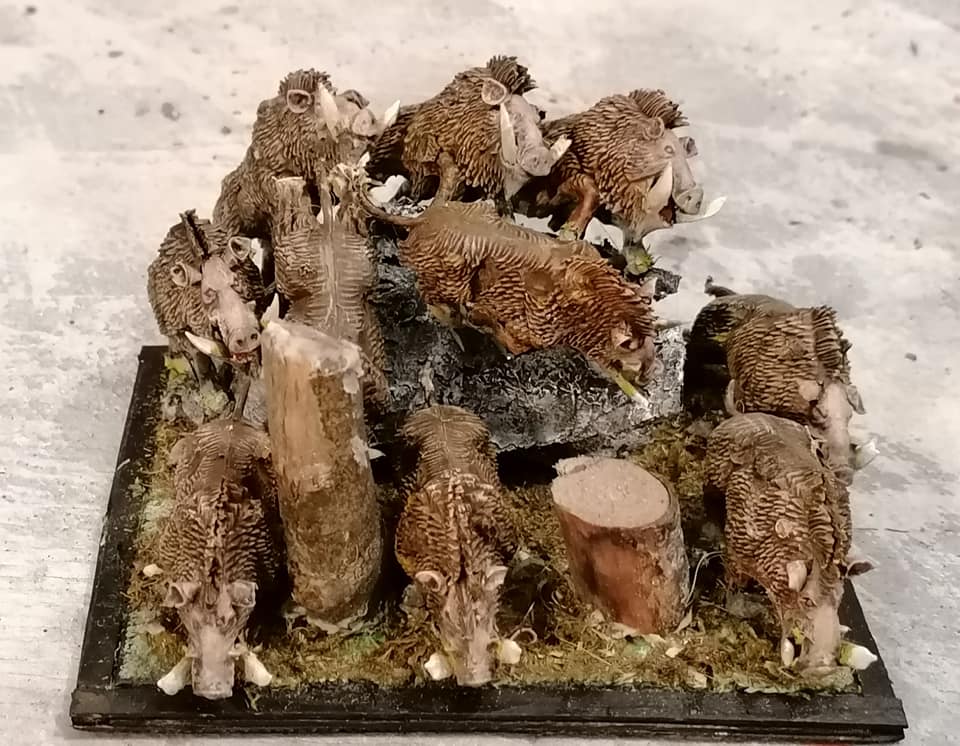 Part of the challenge will be to create a ‘competitive’ list, while ruling out some of the stronger Host units: for example, Tree Herders/Shamblers Earth Elementals, Longhorns?Guardian Brutes? i haven’t a clue how these would fit into my vision of The Herd, but research is ongoing, Hopefully, i won’t need them.

Going to be interesting when we can pit our Herd forces against each other, as mine leans heavily into Longhorns and Guardian Brutes.

Also nice that we both have themed Herd forces, mine being themed around Hyenas.

@Stonehorse The longhorns and the Guardian Brutes add a heck of a punch in combat to the overall Herd , so it’ll be challenging to face them. Herd on Herd could be fun… No pussy footing about, with both armies having a lot of speed pathfinder and thunderous charge eager to get first blood

Given that Longhorns are still h2, just on larger bases, you could easily run them as your ‘elite’ troops?