Vanguard gives very little instruction on terrain placement, other than “at least 25% table coverage”. Some of the scenarios give a little more guidance, but not much. But terrain has a massive impact on the game: Terrain can dictate wins and losses, and exacerbate issues with shooting, cavalry, or other warped metas. So it’s important to get right.

To that end, I’d love to foster a discussion about what a good Vanguard table looks like by encouraging people to submit photos of their tables to be critiqued on playability and balance.

I’ll start! Here’s a table I set up for a Rescue the Prince(ss) scenario: 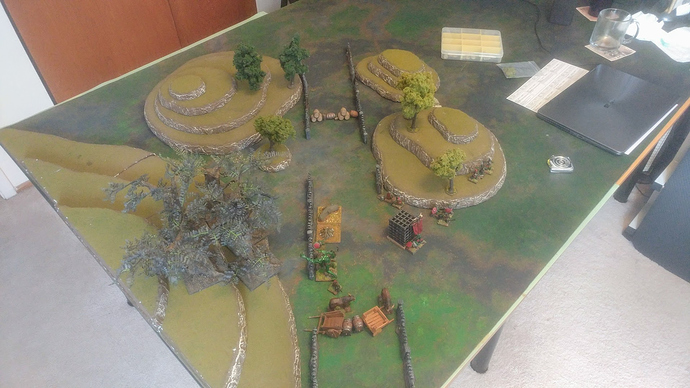 My criteria for a good table:

I should clarify that the high point of the hill to the right of the objective is just out of 12" from the objective.

What are your thoughts? How many stars would you give this table? Is it wildly unbalanced anywhere? Why/why not?

I’ve yet to play Vanguard but it looks great to me. I was just looking through the book last night to figure out terrain.

Where and what would you add to balance against high quality Scouts?

What’s the issue with Breath weapons? I intentionally used obstacles instead of big difficult terrain or impassable to avoid mandatory death funnels.

The table looks nice but I am missing some pieces of difficult terrain and buildings providing cover and blocking LOS. The trees look nice but too solitary. Do at least those on the terrased hill in front form a forest area. I am inclined to agree with @VigoTheButch that shooting armies would enjoy playing on the table.

I would like to add that I appreciate @generalsloth for opening this topic. On one hand, it is great that the VG boards are sufficiently varied and the setups are different each game. On the other hand I think we are missing a guidance on what tables are considered appropriate. There is nothing like an established set of “maps” similar to those we have for KoW. I hope this topic can bring some good ideas on terrain setup in VG. I will also look for some pictures of the boards we used in our games.

Some boards we played on: 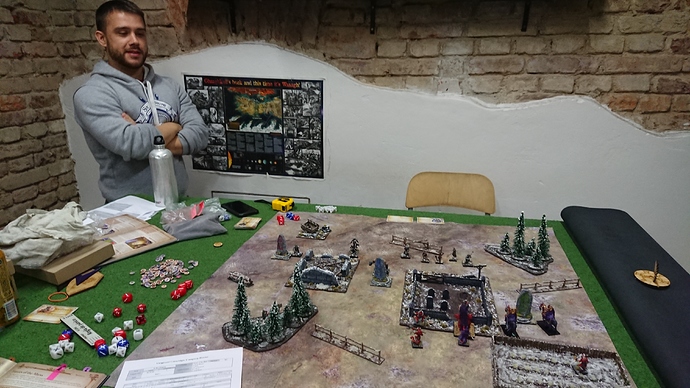 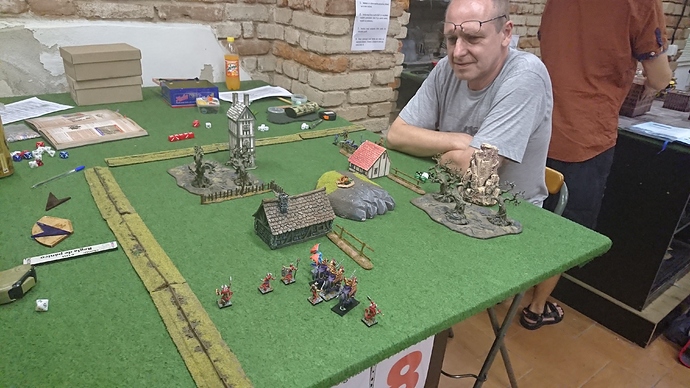 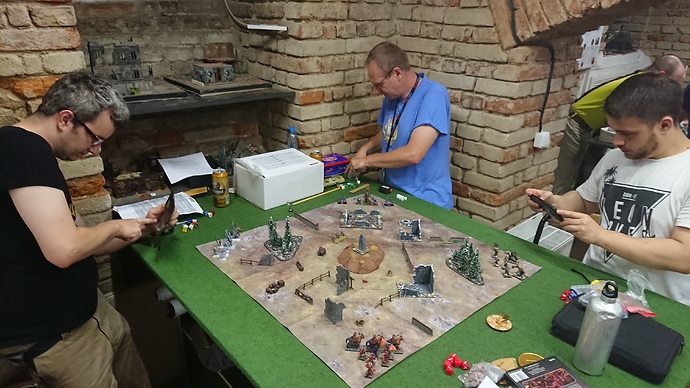 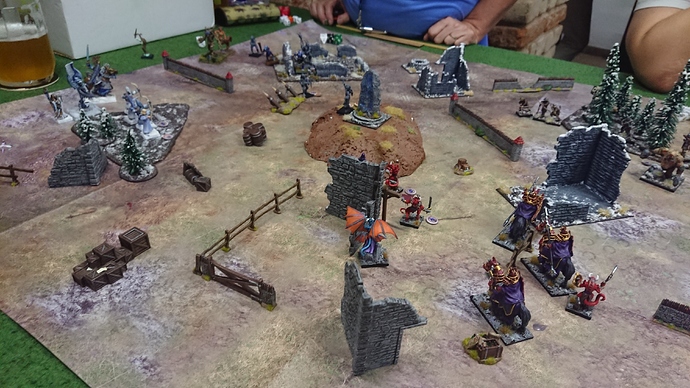 The last two are from a game 4 players took part in, each deploying in a corner.

How did they play? Any shooting heavy lists?

I mentioned my opponents warbands in this post, Trident Realm.
And my warband in this one, Forces of Nature - musing on tactics and warband composition.

The gameplay was OK. The shooters took their chances and made some wounds/kills in the starting rounds but did not have much impact on the game later on.

Thanks so much for keeping this conversation going, @AlQuds ! I’m only going to comment on the 2-player setups, as I have no multiplayer experience, but here’s my quick thoughts following my checklist.

Obj/DZ Kill Zones - 4/10
On the plus side, there’s no elevated terrain with clear LOS to objectives or deployment zones, but on the other hand there’s also no meaningful LOS blocking terrain. Against a strong shooting faction, this would be problematic. Scouts or mounted archers in particular would be a headache.

Coverage - 8/10
Looks like it meets the 25% minimum, albeit concentrated in a few large pieces.

Navigable - 4/10
Has movement corridors to reach objectives, but with two large patches of difficult terrain/obstacles between the objectives, it’s very difficult for slow factions to move between them.

Attack Corridors - 5/10
There are several corridors, and players can make the meaningful choice to approach in the open or via cover. However, because no LOS blocking terrain is in the middle, the whole board is a bit of an attack corridor.

Terrain Mix - 4/10
No impassable, little LOS blocking except in the corners, no elevated terrain.

Focal Points - 5/10
Some amount of careful maneuver is rewarded, but could be improved.

Obj/DZ Kill Zones - 2/10
Placing the spy atop the hill means it is very exposed to unimpeded shooting/charging. And if the towers in the corners are climbable, they directly overlook where the plans may end up, which creates a strong kill zone over the objective. Center hill, and no terrain in DZs or along flanks are very vulnerable to Scouts.

Navigable - 8/10
Not hard for slower factions to move across. I might have put a small gap/gate in the middle fences.

Attack Corridors - 8/10
If a model wants to be out of LOS, it can probably do it, or at least be in cover. Conversely, there are some chokepoints on the board that make good spots to launch threats. Only melee concern is Cavalry/high speed models might have it too easy here.

Terrain Mix - 6/10
Has a mix of most types (maybe climbable), in mostly appropriate locations.

Focal Points - 7/10
The terrain very much matters in this scenario, and players will need to plan accordingly.

Many thanks for your detailed analysis! We did not know that our tables would come under such scrutiny.

If we knew, we could have tried to do better.

Your comments are indeed revealing, it is good to get someone’s else opinion.

I am also pleased that the second table got a better rating from you as I myself did the setup there (was not involved in setting the first table).

Just for a record. All the buildings were treated as simple blocking terrain. We are yet to introduce elevated platforms in our games.

Just saw someone post this nice-looking table in another thread. Thoughts?

Looks to me like a great dense table. I’d worry about the elevated terrain in the middle if they are overlooking objectives, and I think some of the very large area terrain need to be broken up or given paths and some of the walls given openings. Other than that, seems to have a nice mix of terrain and meaningful choices.

I think it’s 4 stars. It would be five but I think the terrain needs to be a bit more spread out.