GW may have killed support for that system, but the rule books are still valid. J(…) I refuse to pay GW prices. (…) I stick to 6th edition with Ravening Hordes lists. Most balanced version of WFB.

What many of us agree on, is that GW killed something valueable when they destroyed the old world. In real-world terms, they alienated countless gamers due to their greedy price gouging. This is what happens when capitalism gets its greedy paws on something a lot of people are passionate about.

I’m happy there are other companies like Mantic that do not go that route.

The first question is “do you actually play other games?” If you do then finding a way to use your minis in both is a good idea.
If you don’t, then you can decide on if it’s worth the effort. Even then I would not rebase, I’m lazy like that and you never know what the future holds.
I sold my old armies when I got fed up with GW and quit Warhammer though

I have found that as my life gets busier with adult stuff and as I enjoy KoW, that the time and interest that I have for other games is getting rather thin though.
I also like Mantic as a company (I feel that they respect that their product is also a hobby), so I want to support them.

I did multibase the minis that I got from Mantic minis for KoW and would recommend that you do the same.

I’m just setting up for a game of my recently multibased orcs Vs Goblin armies… And I got to say that multibasing them makes them look so much better on my battle field. I certainly don’t regret it… the legion of Night Goblin Sharpstikkas in particular… imagine trying to put 60 little goblins on a big movement tray and getting them to stay there … and the look on your opponents face when they slide off into a pile at the bottom of a hill… no thanks

plus, you can’t get that mad crush to get into the fray effect if the models are on individual bases… that disorderly charge method which is so common amongst orcs or zombies

Why would people feel anything special for the game if I show them my same old unit on a movement tray that they have seen me use before?

Maybe because someone spent bunch of money and time on those units and want to enjoy them? Perhaps it was painstakingly convert or made from really expensive models.

If you have a work of art on your hands, then sure I will understand if you don’t wanna chop them off their bases.
(Although they might look even cooler on a multibase, guess we’ll never know)

I know, but if I start one army multibasing, then I would have to other and I dont have will or heart to break them and there is just soooo many miniatures… 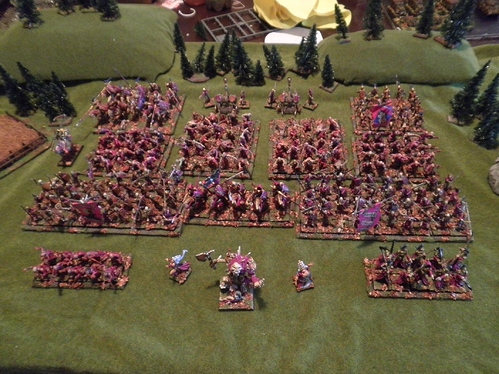 This is the pic from 2012., when Undead had monster Pharaoh and now there is at least 5 or 6 more units. I really dont want to rebase them

Why couldn’t you have one army multibased and another on single bases? You could even do it for some units in the army and not for others, if you like.

I have done that. I made multibased units and my Nighstalker army is all multibased. And it took me a year to decide that.

But debate went should old army which is single based stayed like that or should be put on multibases. I am not saying that multibasing is bad or wrong. I am just saying that some people love options.

From the look of it, ThaneBobo, they are on nice looking movement trays already, so you wouldnt have to take them off their bases, just put a coat of pva on the bases to hold them in place… or magnets , and they would be done. if push came to shove and you decided to take them off the tray, it’d take very little effort to do so, but they wouldnt just drop off on their own, Lovely looking army btw

i have some orcs on multibases but others not yet based , in case i want to use them elsewhere

If I was more likely/inclined to play smaller scale or skirmish games I’d probably just build more armies (from the massive, but receding, grey plastic pile)!

Can completely understand why some people are wary about multibasing - using individual models as per wfb or cutouts etc works fine - just isn’t my preference.

Why couldn’t you have one army multibased and another on single bases? You could even do it for some units in the army and not for others, if you like.

My main army, which has been steadily expanded/transferred from single bases to multibases over the years, still has a number of single-based units. It’s just that I haven’t had the time or inclination to multibase these too.

Also, you can see the progress throughout the army. The shield wall, made in 2015 or 2016 are just 8 guys on a goblin green base while more recent multibases look quite a bit better.

Eventually, the whole army will be on multibases. If i’ll be using those GW free company, hand gunners, crossbowmen and outriders enough in KoW to actually transfer them to multibases. For the occasional casual try out, single bases are good enough, but as soon as I’ll be using them regulary, they will transfer.

Oh that’s perfect to hear! 9th Age is specifically what I had in mind for alternative games.

I did too. Here’s my first experience:

And it’s complicated…. (not in the sense that my opinion of the game is complicated, but the rules are quite complicated.) Let’s tell the story of how I came to play the game. A m…

Please bear in mind that it’s writen from the perspective of a KoW fanboy. 9th age is a valid alternative for KoW, and though it’s got its differences, the fact that it can be played with the same armies is a great plus. There’s nothing to stop you from playing both.

So it’s settled: multibasing from here on! 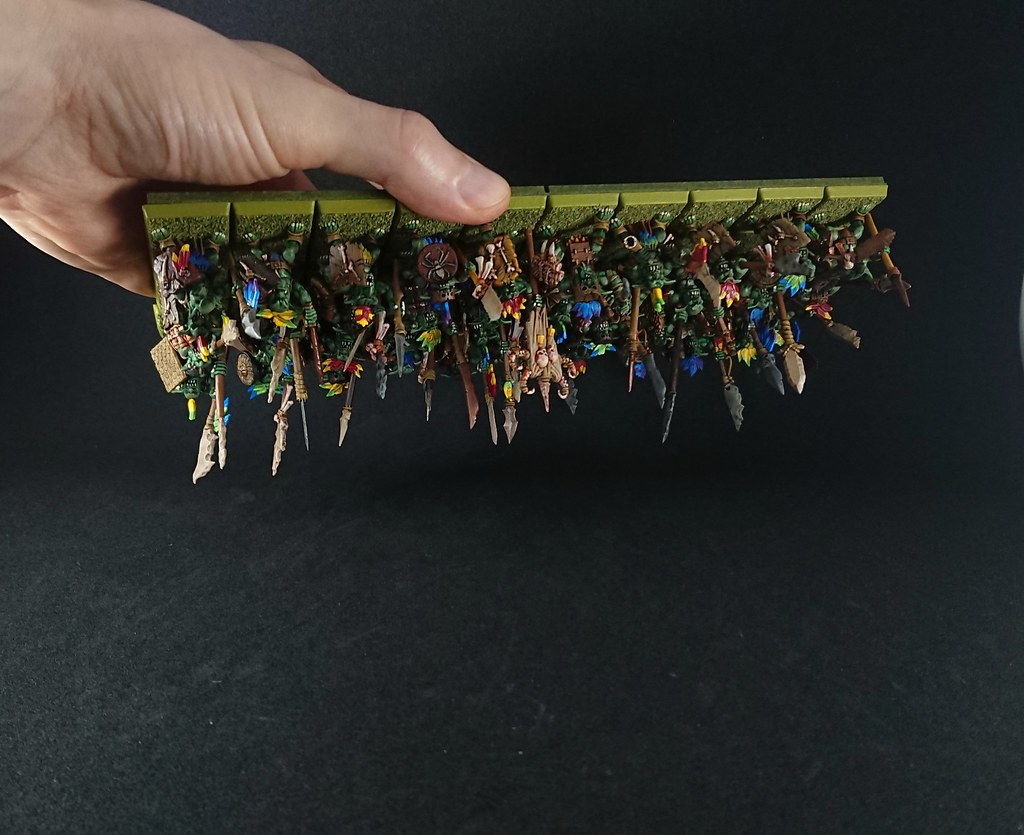 Now your thinking… with magnets!

Bravo, magnets are certainly an option to make them secure, but nevertheless, it is still time consuming to put them on, and take them off, when compared to a movement tray, and you lose all the fun of a diarama for your legion

Well they mostly just live on their trays, but the main thing is, as others say, if you play / want to play other games too (like I do - one of the 10%ers apparently!

), I do think this is the best option. Best of all worlds for me!

Here’s some more examples of stuff I do with trays & magnets. Btw the trays also have magnets on the bottom and my carry case that the trays magnetise to can even lie horizontally and they are all fine… (not sure I’d like to turn the carry case upside down due to having metal minis too tho! 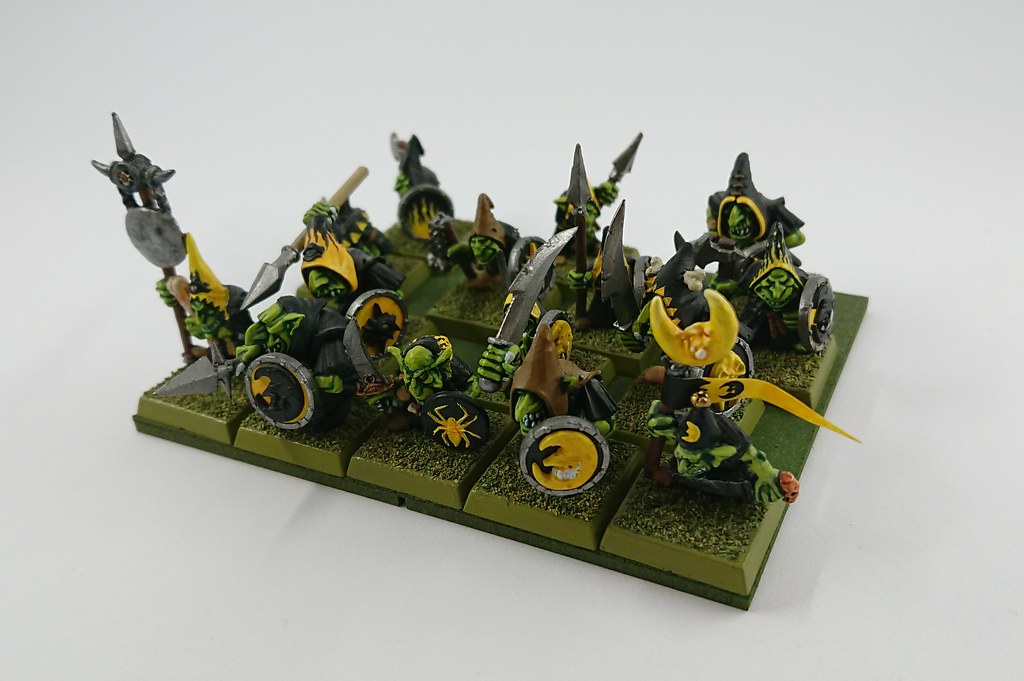