The bowland bash – when stars and dice align

THE BOWLAND BASH – WHEN STARS AND DICE ALIGN 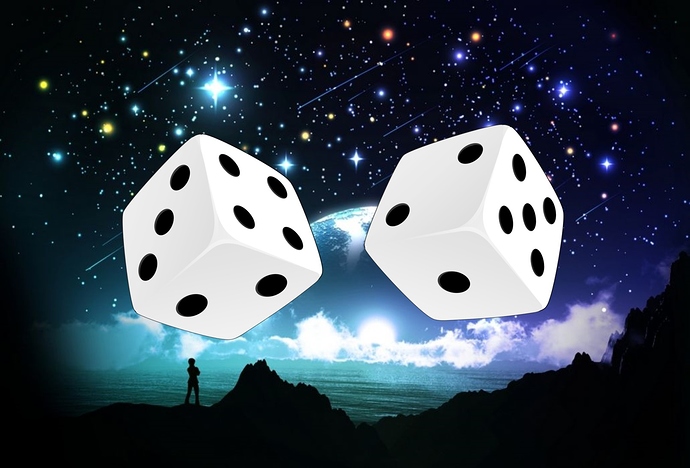 The Bowland Bash was a 3 game, 2,000 point Kings of War Universal Battle tournament held on 29th August by the Trolls of War. The scoring system was 15 for a win, 10 for a draw and 5 for a loss with up to 5 additional points for kills and 5 for victory points based on the scenario.

I attended with an Undead army of:

Having seen the other lists that I would be facing, I would need some luck to do well. 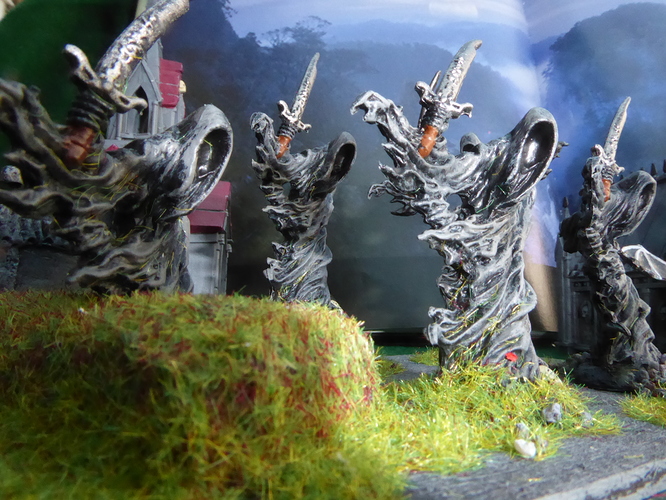 There was one 2 point token on each flank. I deployed heavily on my left with the aim of securing the 2 left tokens and then swinging into the middle. Steve deployed with more balance and with the Draugr and a horde of Frostfang aimed specifically at the right hand tokens.

I started the game with a cunning move on my left flank by moving my Werewolves up and baiting a trap by putting my Vampire on horse into a wood and in charge range of a horde of Frostfangs. Who am I kidding? The Vampire was meant to be tucked away safely outside the wood and out of visibility of the Frostfangs but my sloppy placing of him meant that I had set up an ideal charge and overrun for Steven. He took the charge with his winged Lord into the Werewolves to knock off few wounds and his Frostfangs into my Vampire needing a very small overrun to get into the Werewolves for another round of combat. In one sloppy move, I had unhinged my own plan and handed the game to Steve.

Except. The Lord completely whiffed his attacks and failed to cause any wounds and the Frostfangs only managed 6 wounds on the Vampire. Deep joy. My counter charges, including Vampire on Peg into the flank of the Frostfangs were successful and my plan was back on track.

In the centre, Steve had similarly poor luck. His Lord on Frostfang charged the Zombies and didn’t kill them. In the Zombies counter-charge they caused 2 wounds and then rolled a double 6 for a waver. Magnilde also got stuck in combat with a unit of Wraiths and I was able to move units across to eliminate the threat in the centre.

On the right, Steve grabbed the 2 tokens and stored them in his immovable horde of Draugr but I claimed the other 3 tokens as well as a lot of Varangur skulls for a 24:9 win. 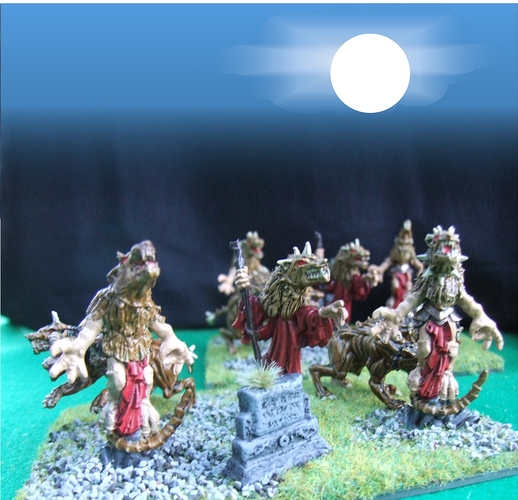 A Moonraker civil war against Moonraker Andy. This would be a tough game against the player currently heading the UK KoW UB rankings.

I deployed slightly off centre with my flanks protected on one side by the pegasus Vampire and Werewolves and the other by the Vampire on horse and Wraiths. It was clearly going to be a big punch up on the centre with both of us trying to get our nimble units into flanks.

We both advanced cautiously and then Andy saw an opportunity to seize the initiative by getting the first charge into my big blocks with his knights. Unfortunately, the chargers bounced and were then subject to furious counter-charges. The fight dragged in all of our units and in the end I was sitting tight in the middle of the board surrounded by dead bodies. A 23:8 win.

GAME 3: SALT THE EARTH, THE KING IN THE NORTH, UNDEAD 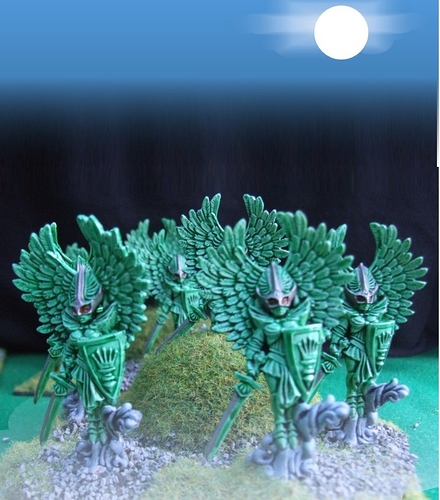 Before the tournament started, there had been a live commentary on the different lists that people were brining to the tournament. People questioned why I had taken the Brew of Strength on Soul Reavers that were already crushing (2) and why I had taken 2 sources of Bane Chant. Dan’s list is a good reason to do that:

Lots of high toughness combined with Weakness and Surge.

When I had analysed Dan’s list, I noted the relative lack of inspiring and the reliance on Surge and my plan was to take out the 4 individuals as early as possible. They say that no plan survives contact with the enemy; in my case, no plan survives the red mist that descends and I just want to kill stuff. Without giving too much of the game away, I can reveal that it was turn 7 before I managed to kill any of the individuals.

The tokens were deployed favouring the right and with one token deep in each back field (placed by me as a site for Zombies to sit).

I knew that Dan would out-drop me and that he would try to get his Wyrm onto a flank to get behind my lines. I deployed the bulk of my army slightly right of centre but both Vampires on the open flank on my left in front of my Zombies siting on a token in the back field. Dan deployed more evenly but heavily on my right where he also dropped his Dragon.

This was a pretty cagey game, especially by me and had we been playing on the table top with clocks I might have been under time pressure. I moved forward cautiously, trying to keep out of range of any flanking surging shenanigans. I was then faced with the option of sitting back or going in. My head said hang back. The red mist over-ruled it and I went in.

I got each of my Wraith troops into Dan’s Wraith regiments to cover the advance of my other units. This was risky as had I not caused a wound, those regiments would have been able to get airborne and inflict massive pain. Additionally, the higher nerve and more attacks of the regiments meant that I would lose these battles. Luck was with me and I did manage to ground the regiments. More than that, in one round of combat, my troop inflicted 3 wounds on one of Dan’s regiments that only inflicted one on me in the subsequent counter-charge.

Dan flew his Wyrm up behind my lines and, to get the Werewolves out of his charge arc, I made a near-suicidal charge into a horde of Wights. Failing to kill them, Dan got a charge in the front and a regiment of Wraiths in the rear, 24 wounds later and, you guessed it, double 1.

I had managed to turn everything else to face Dan’s Wyrm and so he charged into the front of an already-injured Soul Reaver regiment. He failed to kill it but it did waver and withdrew allowing me to get Wights into the front and the Vampire on Pegasus into the flank. One dead Wyrm.

That really sums up the game. Lots of wounds on my units but few actually killed while my dice were on fire and Dan’s were clearly sulking and showing him the finger. As an example, my Vampire on Pegasus took 6 wounds from a charge by Wights but did not waver, 3 combats later it had life-leeched all the wounds back.

I ended up owning the centre token and 2 others with the battlefield littered with the bones of the dead. I was lucky to runout with a 24:6 win.

On the day the stars aligned and my dice were good, I ended up winning the tournament. Bob finished in second place with his Free Dwarf army – just think how good he could be if he actually had 4 Dwarfs in it!

A great tournament run by Jan, thank you very much. Thanks also to my opponents for putting up with my outrageous luck in the tournament.

Interesting list - plenty of beat stick to it. As you say, there are times when cs2 just doesn’t consistently do enough - was the other soul reaver unit tooled up?

Not gone down the UB route, but do you see more skewed/odd lists than you would IRL?

Andy’s KoM list (don’t know how he did with it overall) seems a bit, err “off” somehow as an often KoM player? Could just be very different play styles, but I’d have only about 3 comparable units in a 2k list and personally I’d struggle to run his?

Other Soul Reavers had Chalice of Wrath - I’m fed up of seeing my units waver and have enjoyed Indomitable Will on my Rhordians.

Andy has played that list for some time and plays it very well. In 2 previous UB tournaments, he ended up on top table in the final game but then unfortunately lost. He has been riding high in the KoW UB rankings.

You probably do see more variety of lists on UB as people do not need to paint up huge numbers of units to play a game knowing that they then might switch lists completely. There is also a bit of an ‘its not really KoW’ vibe about UB with the temptation to experiment with wild and whacky lists to see what happens.

Not surprisingly you may start seeing netlists (and counters) in an online event!