What a strange year! It started quietly with a Vanguard tournament held at Entoyment that Jon attended with his Abyssals, coming second and winning some great loot. 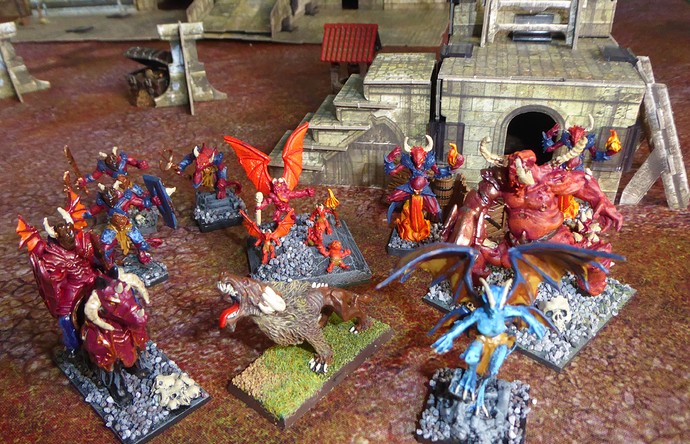 At the end of January, Andy, Paul and Jon braved bad weather to attended Stane of Blood, a 1495 point KoW tournament with 22 players organised by Matt Gee. Paul’s Empire of Dust came 7th, Andy piloted his Varangur to 5th place and Jon defied the odds to win the tournament with his League of Rhordia. Tournament Report: (HERE)

This was the first tournament at which the Moonrakers presented a ‘Curiosity’ Award for an unusual event that occurred at the tournament. 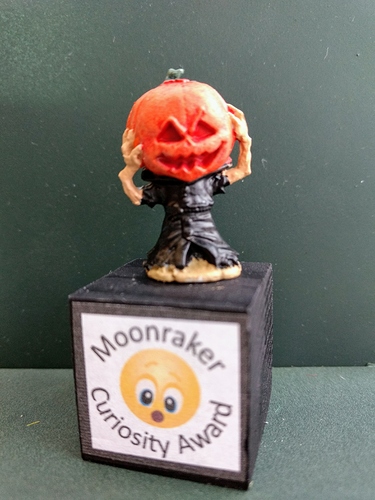 Rob Hutson was the first recipient – in his game against Jon, his Dwarfs proved incapable of passing any of their Headstrong rolls. 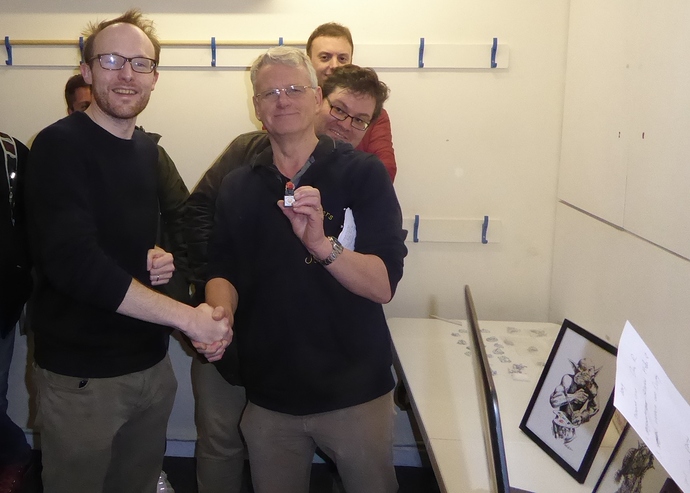 After this tournament, Jon found himself leading the UK rankings, largely on the back of some good results at the end of 2019 topped off by the Stane of Blood results. This happy state of affairs lasted for slightly less than 24 hours – but it lives on in our memories. 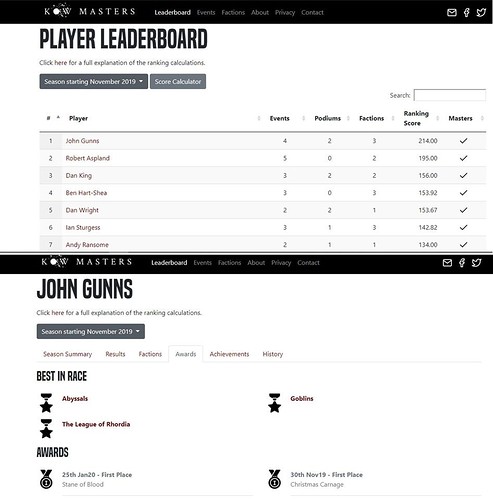 Early February saw Entoyment’s Mantica Rises tournament as part of the Beachhead gaming convention in Bournemouth. Three games on Saturday at 1800 points and 2 on Sunday at 2500 points with 22 attendees. This was a great venue and there was plenty of time to look around the show. Paul was not feeling too well but made the effort to attend, unfortunately having to retire after the first game. Andy ran out in 11th place with his Varangur but picked up the Most Bloodthirsty General award. Jon’s Rhordians were in second place going into the final game but lost to Dan King and slipped to 7th. Tournament Report: (HERE ) 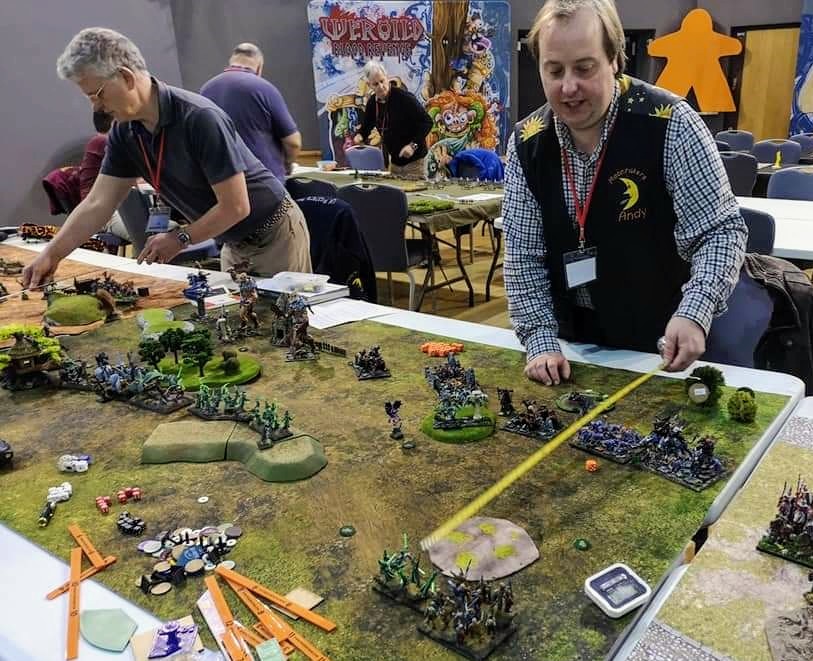 The second Moonraker Curiosity Award was presented at the tournament, this one going to noted fantasy novelist Rich Massie. In Rich’s game against Moonraker Andy, Rich charged a regiment of Mummies into the flank of one of Andy’s units and caused … no wounds. 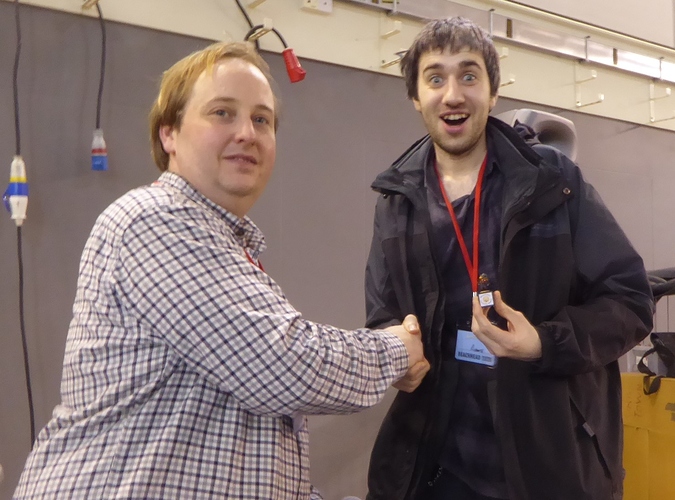 Jack of Herts, a 4 game, 1,000 point tournie, was also held in February. This was attended by Jon who won 2 and lost 2 games, finishing mid table-ish. Tournament Report ( HERE)

FRANTICON was held at DarkSphere in London in early March with a doubles tournament on Saturday and a singles on Sunday. Andy and Jon teamed up for the doubles with a dastardly Varangur and Rhordia army that was unstoppable. Unstoppable in its plunge towards the bottom of the rankings.

After a thoroughly forgettable doubles tournament on the Saturday, things could only get better in the singles on Sunday. They didn’t and our 2 heroes found themselves returning home to face the wrath of the other Moonrakers. Tournament Report: (HERE). This weekend was made memorable by the photo of Andy and Jon waiting to get into the pub at 9 o’clock in the morning getting more likes on Facebook than the pictures of their armies. 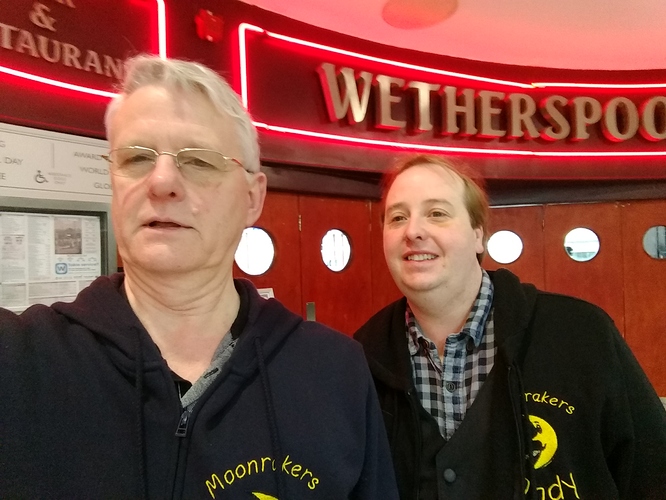 One good thing to come from the event was the 40% off sale in the shop for Mantic products, Jon picked up a Shadow Hulk and now just needs an army to go with it.

All the Moonrakers were hard at work on their armies, Jon mostly converting Loka chess pieces (sold cheap in the Mantic sale) to represent KoW units and also converting a Tarkus, based on a classic Emerson, Lake and Palmer LP cover. 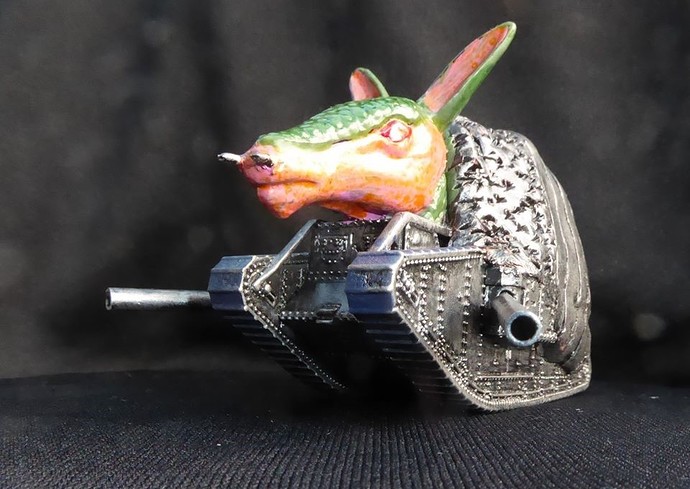 Paul converted some Napoleonics to represent Kingdoms of Men – you haven’t lived until you see Napoleon’s Old Guard stand firm against a Mammoth.

Meanwhile, Andy was busy with Pumpkin headed Varangur, Orcs and lots of trees. 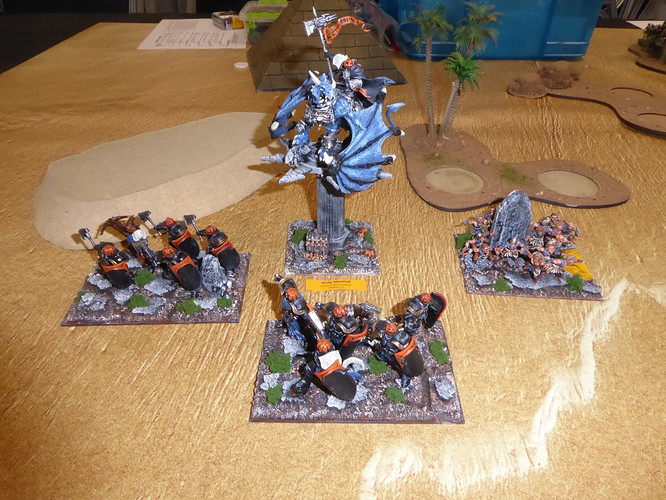 Jon also finished (for the time being) his Abyssal Dwarf army and posted a video of it (HERE).

And then, disaster, Coronavirus arrived and tournaments were cancelled left right and centre. Our heroes were forced to investigate Universal Battle as a means of scratching their gaming itch. Jon took the opportunity to restart the production line for his Abyssal Dwarf Golems.

As a means of spreading a bit of humour, the now traditional Moonrakers’ April Fools’ joke this year was the advertisement for the Auto-BETTY, a game playing aid that offers in-game advice to ensure a win. 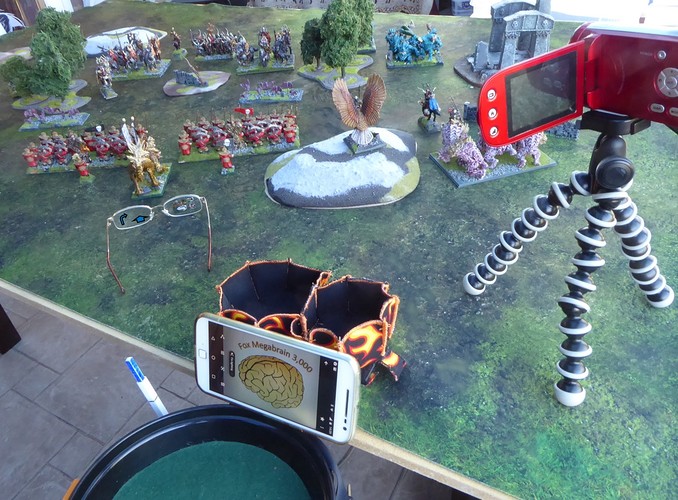 Winged Hussar publishing instigated a short story competition in April. Jon submitted 2 offerings, one of them specifically designed to reflect the current pandemic. The anthology was released in September and can be downloaded free (HERE).

April also saw the publishing of the video ‘An Audience with the Moonrakers’: (HERE). This featured tactical hints, modelling updates, a question and answer session and interviews with key Moonrakers.

Andy moved on to construct a new all-Mantic army of orcs, which was featured on the Mantic spotlight in May. Andy’s winged slasher also achieved a podium placing in the modelling category in the Kings of Herts on-line painting competition. 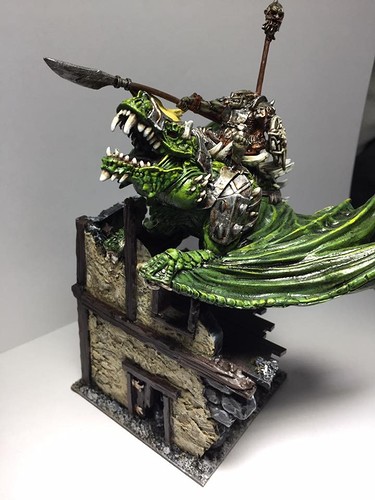 Leo used the time in lockdown to good effect in painting up a Northern Alliance/Varangur army that got featured in the Mantic Community Update on the 13th May. [Army Review] [img] 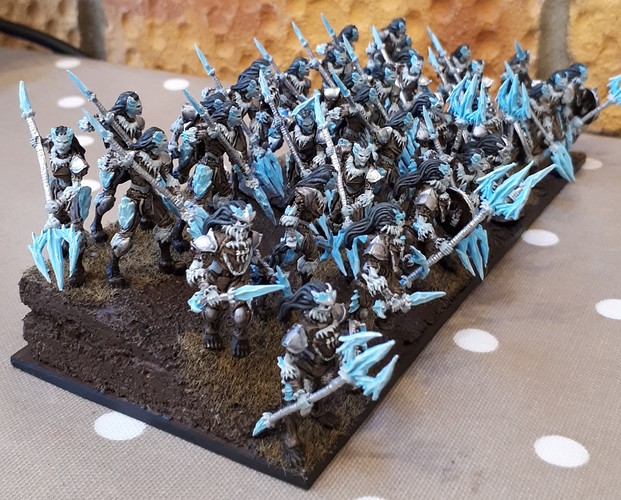 In May, Andy and Jon, played in the Wish You Were Here Universal Battle tournament. Unfortunately, neither put in a stellar performance.

In June, Jon and Andy played in the King of Herts On-Line Tournament. Jon’s comedy Abyssal Dwarf flying circus with 6 troops of Gargoyles fared as well as you might expect. Andy played really well and after winning 3 games he set up a top table decider against Ed Herzig’s shambling forests. The game was streamed live HERE with Andy unfortunately succumbing to Ed after a critical Double 1 roll.

In July, Andy and Jon attended the Midsummer Madness Universal Battle tournament. For the second tournament in a row, Andy ended up on Table 1 for the last game, this time losing to Dan King. Jon had a very undistinguished tournament.

In August, Andy and Jon attended the Southern Skirmish Universal Battle tournament. Neither had a great result but Andy’s succession of good scores over recent tournaments propelled him to top spot in the UK UB rankings.

This was followed by the Bowland Bash in which Jon successfully bribed the UB dice to take the tournament victory, including winning a final game decider against Dan King. Tournament Report: (HERE)

Moonraker Publishing announced the release of their first book on Kings of War: 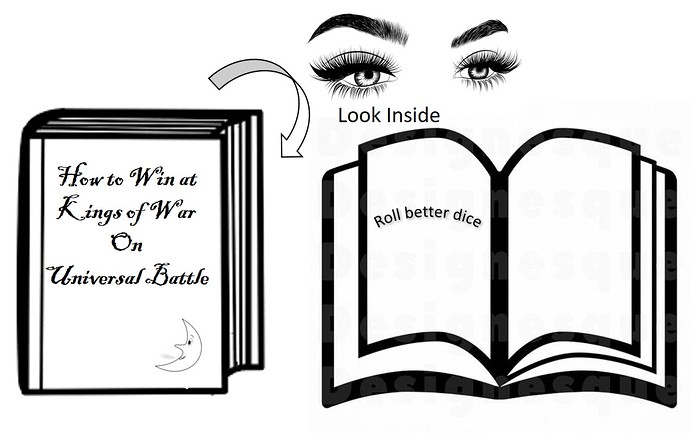 This was very well received with multiple ‘likes’ in the first 24 hours of the announcement.

Andy and Jon also attended the Destiny of Kings campaign, a non-tournament campaign using the Kings of War Destiny of Kings book. A highlight of Game 3 was having Mortibris licked to death by a throwing Mastiff in the first turn of a game, thus immediately losing the game for Evil.

In September, the Moonrakers released predictions for Kings of War in the coming year. These predictions were actually made by Bobadamus, a distant relative of Nostradamus, who has inherited his ancestor’s psychic ability. The predictions are in the form of quatrains and should only be viewed by those keen on solving riddles. (HERE) 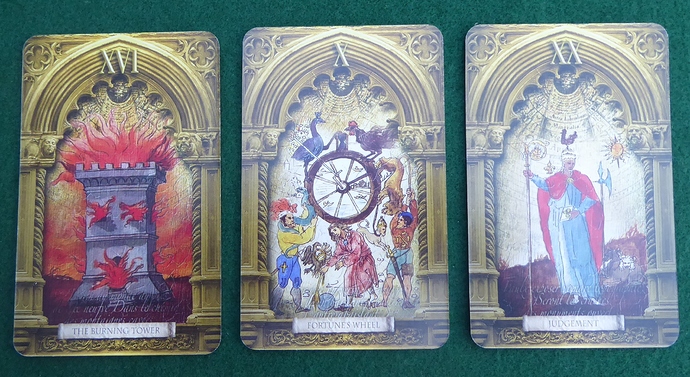 Some predictions have already proved correct. For instance, Bobadamus correctly predicted the success of Armada.

The autumn saw the release of Halpi’s Rift. Then circumstances have not allowed in-depth consideration of the book (beyond the fact that Abyssal Despoilers were mysteriously left out) but Andy joined the Universal Battle Into the Rift campaign.

To commemorate Halloween, Jon posted a video of his Undead army. (HERE)

With only 2 of the Moonrakers playing on-line games, and the Oxford club suffering similar shortage of on-line players, it was suggested that a combined on-line team might be formed to contest a proposed south east tournament. 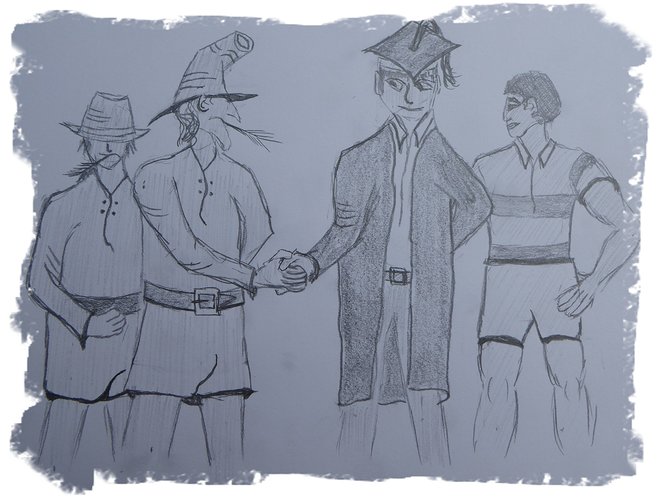 The combined team was to be called the Oxymorons. Ox because that is the beast of burden and plough-puller used by the Moonrakers and Morons for those from a town with a second rate university. There was a suggestion that merging the 2 teams might not go as smoothly as some may have wished.

Andy and Jon joined the world-wide on-line tournament, Call to Arms 5. The tournament started at the end of October and will run into the new Year. 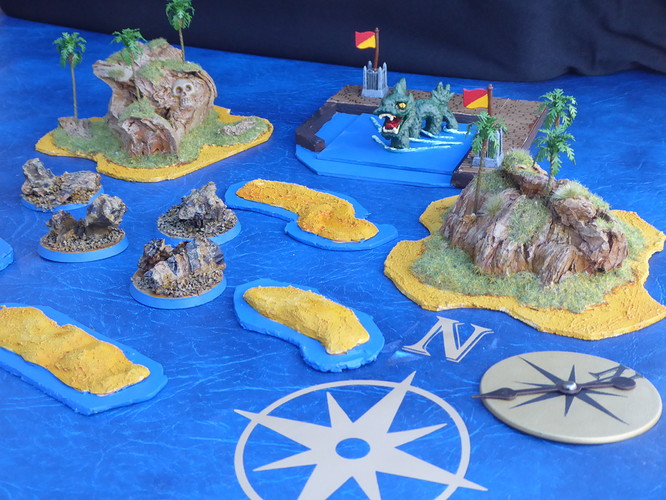 The game was due for release in November but it took some time to get the models out of the door. The wait was unbearable. Jon maintained a diary of his descent into madness while awaiting delivery (HERE).

Joy was unrestrained when the ships did arrive. The wait was worth it as the game looks fantastic. A clear and attractive rulebook and some great models. Jon painted up an Orc fleet starting with this modified Hammerfist. 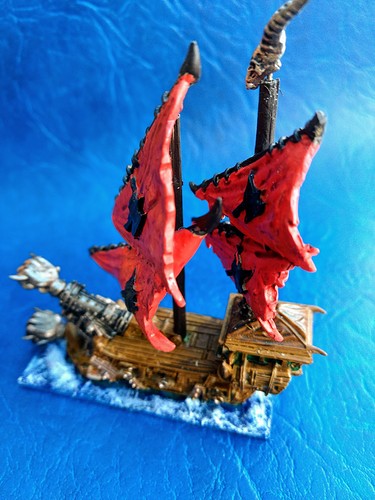 and recorded his fleet building trials and tribulations (HERE)

He also contributed to the various Armada downloads available free from the Mantic webstore (HERE).

Leo continued work on his Northern Alliance army which he recorded in his blog (HERE). 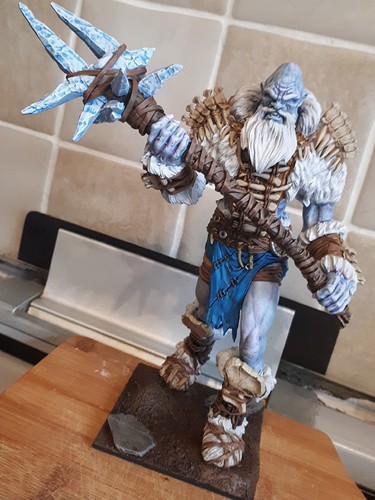 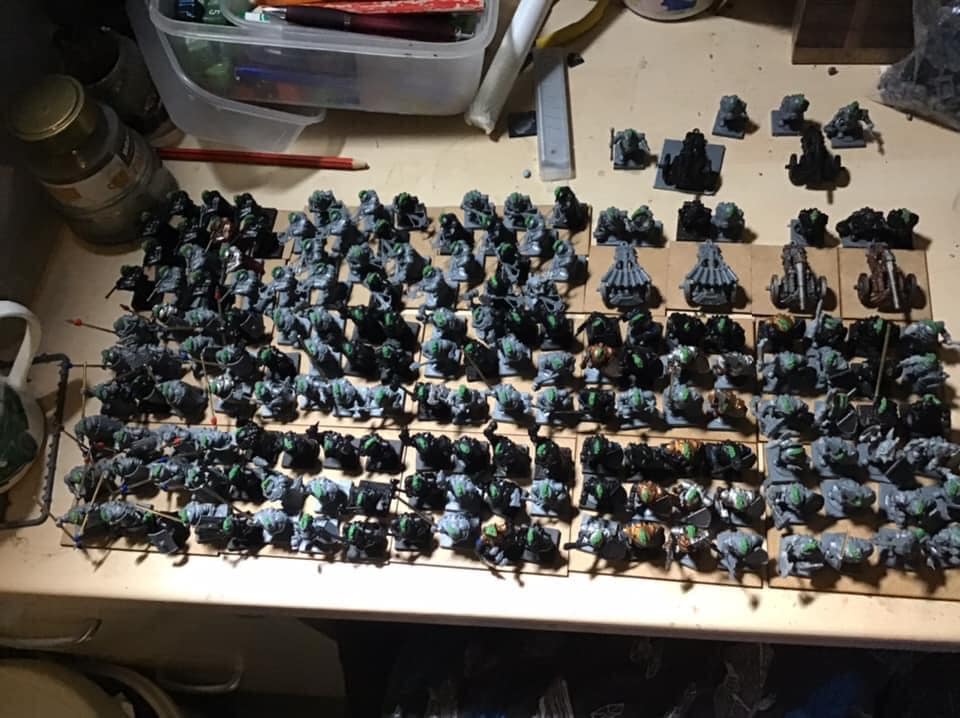 The Moonrakers wish you as happy a Christmas as possible in the circumstances and hope that your 2021 goes better.

Man it’s certainly been a awful year for a lot more important reasons than wargaming… but I think the lack of seeing friends, clubmates, tournament friends and tournament strangers has certainly not been good for mental health this year.

I have managed to make and paint a Northern Alliance army over the year but its been tough to keep motivated when you don’t have any upcoming club games/tournaments to get them ready for.
List tinkering, another part of the hobby I enjoy is hard to do when there are no games to test the lists.
I suppose I could have stayed engaged with the community and tested lists via UB but to be honest I sit infront of a PC all day for my job so I have no desire to spend my evenings doing that too

Also I’m really sad there was no Clash of Kings this year. It was of course very sensible to cancel it but as a parent of small kids its usually the only 2 day tournament I have wife points accrued to attend and it’s always a great weekend.

Good stuff Jon - even if the year was a bit sh*the.