Undead at the 1K Jack of Herts Tournie

Jack of Herts 3 was a 1,000 points singles KoW tournament held in Hemel Hempstead and organised by the Kings of Herts. Having been playing a lot of Rhordia recently, I decided that I wanted a change and dug my Undead out of the box. Unfortunately, I had no chance to fine tune a list or to practise with my army – a lack of preparation that would come back to bite me badly.

The day of the tournament dawned and I set off. There was a bad storm, brewing and I felt less than 100%, living dead even. After driving for 15 minutes, I was very tempted to turn round and go home. But, I pushed on through the wall and arrived at the venue after a 2 hour drive. Things started to improve after a welcoming tournament-themed cup cake and a cup of coffee. 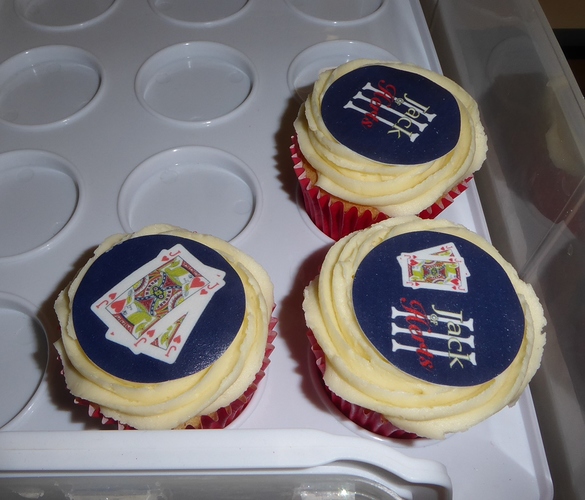 The Kings of Herts lay on really well-run tournaments and this was no exception. Great attention to detail in the planning, plenty of space at the tables and lots of time for games and between games. 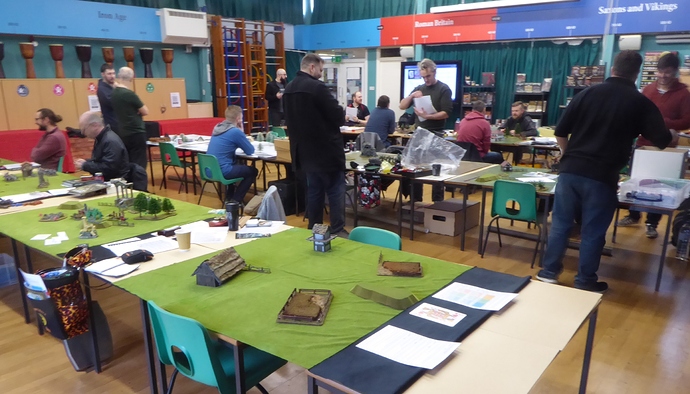 My first opponent was Rusty. However, he was running scared and cried like a little girl to the TO, who took pity on him and rearranged the fixtures so that I was facing Steve and his Elves in a Loot scenario. Steve was running, from memory: 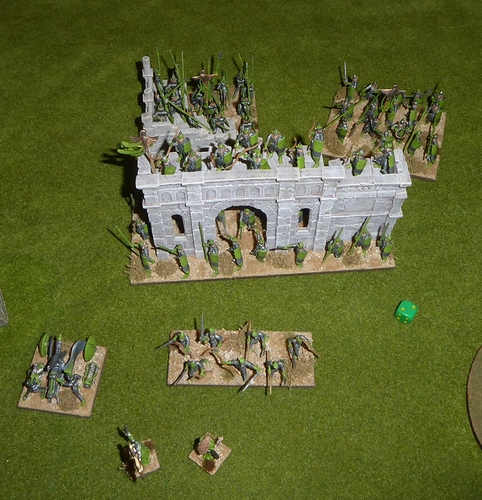 At this point, I must apologise for my poor photos in this article. Not feeling too well, combined with artistic incompetence, mean that many pics are poorly focussed, and I even forgot to take a photo during Game 4. However, the picture below gives you an idea of what happened.

Steve got first turn and pushed forward. His Bolt Thrower took aim at the Werewolves and, in a display of dice rolling that Rusty would have been proud of, hit my Werewolves twice which became 5 or 6 wounds. Ouch. I moved my Wights and Spearmen forward in the centre with my Werewolves and King on the right to outflank Steve’s combat line, knowing that lightning would not strike twice on his Bolt Thrower. Unfortunately, it did strike twice, causing another 5 or 6 wounds on the Werewolves and wavering them (and hit twice again next turn and killed then). This meant that my frontal combat units had to go in with no flank support. I concentrated on the horde of Sea Guard and got them to within a 1 of wavering them. Had I remembered that the Wights are brutal, that would have been a waver! That was my last throw of the dice and Steve proceeded to take my units off the board and score a well-deserved win.

On to Game 2, Invade against Ben’s Salamanders. Ben was sporting:
Horde of Rhinosaurs
Troop of Kaisenor Lancers
Regiment of Fire Elementals
Troop of Ghekkotahs
Troop of something else small
2 Heroes 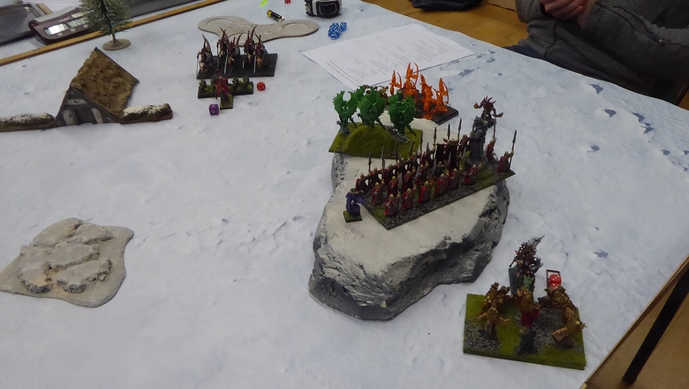 Ben deployed the Rhinosaurs on the left flank, shielded by the Ghekkotahs (out of shot to the left of this photo). I concentrated on the right, sending the Revenant King to delay his left. This, the King did brilliantly by wavering the Ghekkotahs which bottled up the Rhinosaurs behind them. This bought me the time I needed to deal with the right flank and by the time the Rhinosaurs engaged, it was just about all over. A win to me despite some scary moments from Ben’s good play.

For Game 3, I was pitted againt Danny’s Undead in a Pillage scenario with 6 tokens. From memory, Danny had:

Danny pushed up in the middle and we had a cagey stand-off, neither wanting to commit too early. He tried to outflank my army with his King and Wraiths but I was luckily able to ground the King and then kill it in a single turn with the Wights and my King. This resulted in the situation shown in this photograph. 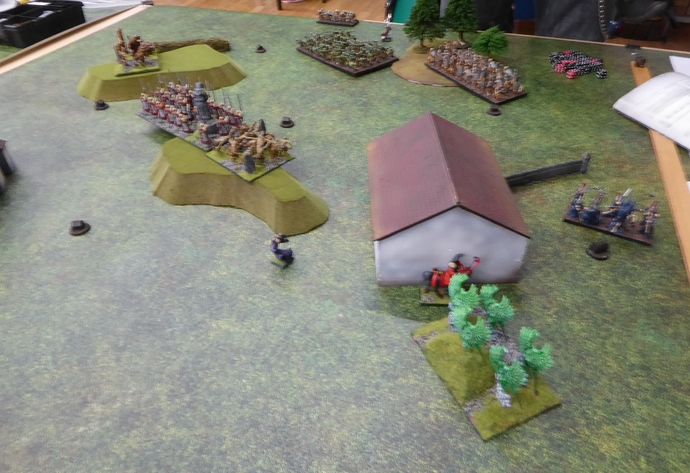 While this put me in the driving seat, there was still a huge amount of bad Undead unit strength to chew through. In my turn 6, I was faced with a difficult decision as to whether to accept the draw or go for the win knowing that I might be undone in the event of a turn 7. I went for the throat – and then there was a turn 7. 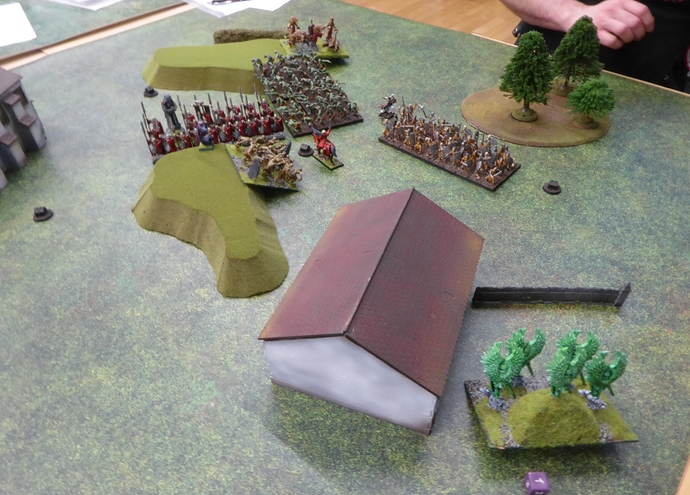 Fortunately, my units survived the counter-charges and I ran out the winner. This could have gone very differently had I not managed to ground the Wyrm and then kill it next turn. Well done to Danny for making a fight of it even after losing his main fighty unit.

On to the last game which featured Ian with his Elves in a Push scenario. Ian had:

I put my Push token on the Zombies and placed them on a flank where they ran (or rather shambled) unmolested into Ian’s table half. This meant we were fighting for Ian’s token and the one in the table centre. Unfortunately, this fight did not go well for me and his Palace Guard managed to grind down my units for the win. Well played Ian.

With 2 wins and 2 losses, I ended up in the bottom half of the rankings.

May thanks to the Kings of Herts for laying on the tournament and to all my opponents. A good day. 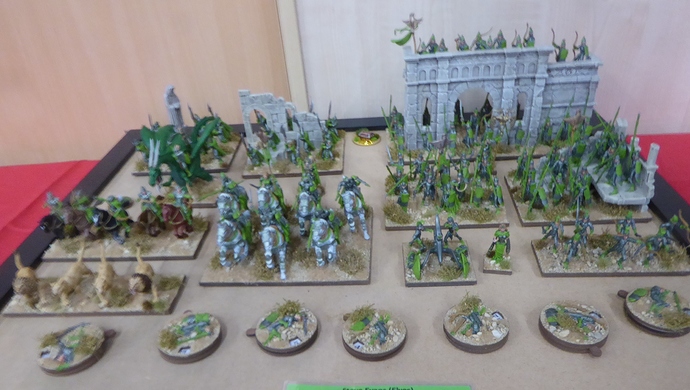 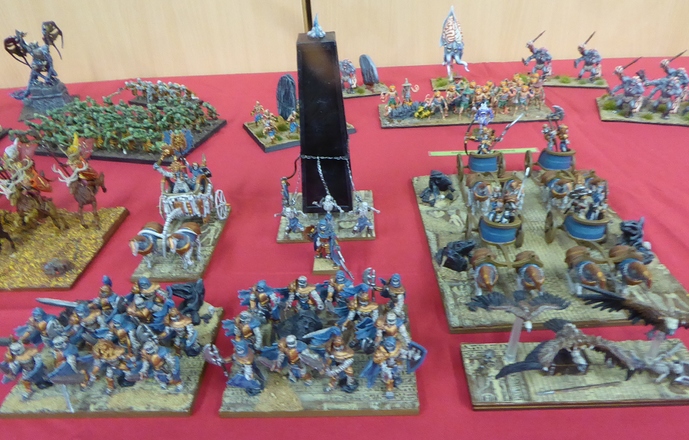 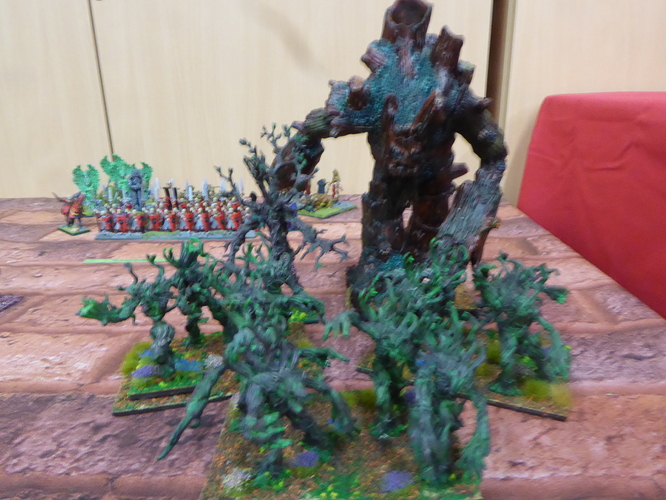 I can confirm that I ran scared like a little girl, as reported

Thank you dearly for coming, I’m glad you didn’t have to turn around in the end!

Yes, very sorry you were so unwell on the day Jon, hope you are improving