So I just got my copy of the 3E Uncharted Empires and I have to say I’m very dismayed at how The Brotherhood has been handled. Due to the way Theme Lists work, it is no longer possible for me to play my army as one. Here’s what I mean:

Like most Brotherhood players, my army was once from a particular Arthurian themed faction from a certain other fantasy game. I was very happy when Mantic released the Uncharted Empires book in 2E because it felt like a band of refugees finding a safe home (not unlike the fluff for the Brotherhood itself). I could play my army just as it was, intact, with all units being represented in one way or another.

And I looked, and no, I can’t use allies from separate theme lists, so basically that nixes any chance of assembling my army as it was using that approach.

At this point, it looks like the best I can do is go Order of the Green Lady and do Basilean allies, using proxies to use the rest of my force, though it won’t play quite the same.

Does anybody have any insights into the purpose of this split? Was The Brotherhood considered overpowered or something before?

Most of the changes seem designed to steer people towards using Mantic miniatures. They want you to either buy a lot of forces of nature minis for a Green Lady list or a bunch of Basilians for a Brothermark list.

See, that’s what I was afraid of. Then again, as far as I can tell, Brotherhood is the only faction this has happened to, though I haven’t looked it all over yet so I could be wrong.

Lots of Herd units have been dropped but can select from the Forces of Nature list.

Twilight Kin have also lost a lot of units but can take Nightstalkers.

So it’s not just Brotherhood, lots of factions had significant overhauls in 3rd and lost access to some key units. I completely sympathize - I’m facing some big changes, too, and to make the transition involves a wad of money and a lot of hobby time that I don’t know when I’ll be able to get to.

I don’t have any inside information as to why this was done, but as I understand it, Kings of War has evolved in every possible way: From a narrative and world-building perspective, Mantic is creating their own stories and spins. Mechanically, they are refining how the game and all the constituent armies work, rebalancing, and reevaluating. Financially, Mantic is trying to perform a very difficult balancing act in supporting peoples’ existing miniature collections and 3rd party products, while also, you know, not going out of business or even better, actually thriving. And as frustrating as all of this can be when managing one’s own personal collection, it’s all in the service of ensuring that KoW remains a vibrant, fun, challenging game with an active community. “Gotta break some eggs to make an omelet”, and all that.

The good news is Mantic seems to have striven to ensure that 75% of anyone’s armies can find a home in KoW, and that’s really amazing for a very refined game. There are lots of games that let you play with any models you want, but the trade-off is those games are not very tightly balanced, well-supported, or popular. And I think as we the community adapt to 3rd ed, and deal with some of the fallout that come with evolution, it’s important to step back and recognize how amazing it is that a company even 3/4s supports an ancient 3rd-party miniatures line that’s been neglected for decade.

Here’s an example of how I’m thinking about it: I love KoW and have a couple armies, but each new army has been a monumental effort and expense. That’s not great for me, the community, the meta, and Mantic.

One of the significant shifts in 3rd ed is to design the army lists with more crossover in mind. With the addition of just a few new units, players can now morph their existing collection from one army into another and experience the game in a dramatically different fashion, at just a fraction of the cost and effort.

So in one sense, you just lost access to part of your army, and that sucks. But the good news is you just gained access to two new armies, and those lead into many more. I, for one, love that my Salamander army has led to a Nature list and, with just a little effort, I can merge that with my Bretonnians and now I have three fantastically different armies to explore. More army diversity leads to longer engagement (aka I don’t get bored), healthier metas, and more fun for everyone. And if that helps Mantic sell more models, well, that’s actually a pretty cool way to go about it.

I was much luckier as I find I can randomly now do a Green Lady Army with my Fireforge figures. I bought the Pegasus Knights to be Elohi and already some Naiads (v old metal GW figs) and Earth Elementals. So I accidently have a new army!

Mantic are trying to define all the armies as part of Mantica. People bitched and whined that KoW was generic and then Mantic try to make it their own IP and people bitch and whine again. Yes we all have things we can’t use but that’s the way of things. With 3rd Mantic are trying to balance things from the start, UE in 2nd was a knee jerk reaction to events, the armies weren’t thought out or balanced, this is giving KoW a more solid basis.

With the use of theme lists the RC and Mantic can more tightly define what armies are and add things without unbalancing the whole list. In the fluff for the Brotherhood they specifically name check the “Roamers” who refused to join either of the new Orders, so my best guess is a third list that follows the original Brotherhood army will come down the line, more in keeping with the narrative for Mantica and KoW as a whole.

This was an extract from a Mantic blog prior to the release of UE.

Q: Have some units been dropped from the previous edition?

A: Just like with the lists in the main rulebook, we’ve taken the opportunity to look at how we wanted each army to behave, as well as how the game played overall. Some of this involved consolidating similar units into one, some units were removed, but others have also been added. Not all units removed will have gone forever – they may come back in a future Clash of Kings book, on their own, or as part of a formation, for example. Some units were moved out of what is now a Master list and into a Theme – and so some units currently not available may do likewise in some of the Themes we introduce in the future.

Q: Where have all the halflings gone!?

A: There are still some halflings in the League of Rhordia list! However, the halflings are pulling back from the League of Rhordia, and while they continue to fulfil their basic and mandatory military obligations, there is a growing migration back to the shires. Have no fear though, the armies of the shires are swelling as a consequence so you can probably read between the lines (and refer to a previous answer above!) if you are a fan of the little people.

As Gerrcinn states above, v3 was about both sorting rules out and moving armies towards how they want things to be based on their progressing lore and background. Therefore a number of armies did move away from the more or less direct proxy of the gw equivalent.

What happened to the Brotherhood follows on from the edge of the abyss book/campaign and to take things away from a direct port across of a Breton list.

A historical style army with knights and peasants plus a fantasy twist can be done via KoM, but Mantic decided that they wanted to switch thing up with these lists, merging them into their own back story.

The people moaning about it being generic and moaning now are not necessarily the same people. Quite likely not to be.

I think that it’s fine for people to vent for a bit, healthy even.

Emphasis on ‘for a bit’.

Thanks for all the great comments and feedback, guys.

I think what makes me a bit more jumpy about this than I might otherwise be is that I seem to have a tendency to pick factions in games that wind up getting pushed to the side. For example, in 40K I picked Black Templars, which eventually got absorbed into the regular Space Marine codex. I picked Bretonnia in WHFB which languished for years and years without an update before the got the whole finger (Spoiler alert, your faction’s deity was just an Elf thing all along! Fooled you!) when the world was destroyed.

Miniature wargame companies really encourage you to get into the fluff. That, to me is a good thing, which is why it rankled me a LOT when GW didn’t just stop supporting their game, but they destroyed the world… So you’re supposed to get invested in the story, then punished for doing so.

But this ain’t about GW.

I’m going through my army, unit by unit, and comparing my options. I do appreciate that Mantic created a safe refuge for those of us who weren’t on board with AoS, and of course I’m not looking to drop KoW. Just gonna have to make some decisions about how to structure my army going forward.

Maybe once I’ve finished my analysis I’ll come back and post my findings with suggestions for others who are facing the same challenge.

No issue with that MarkG, provided it isn’t taken to far.

The changes have invalidated various units I’d built, albeit when looking to ally stuff in to KoM list. The split has actually made me want to built a mantic brotherhood list now - Fireforge stuff is great for this, whichever order you go for

My brotherhood army has been using a placeholder for the order of redemption for the past year.

I painted up a single model for a regiment during the last summer, completing the unit has been postponed due to goblin expansion, however. 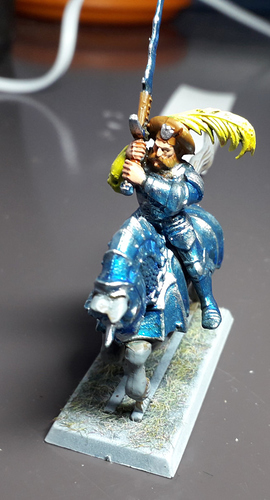 As I don’t think I’ll be doing order of the green lady (due to not playing forces of nature) and my army may do a crossover to Basilea my army will be Order of the Brothermark.

This means, sadly, that the above dude will probably not be getting company. Alas, the ravages of a new edition.
That said, my human army will probably be Basilea first and KoM or League of Rhordia alternatively depending on my whims and/or battlefield performance. when (and if) I the army will represent Brotherhood depends on the feel and playstyle of the army.

There seems to be alot of discussion about E3armies. As i game in 15mm and therefore do not ‘compete’ I am happy to look at these new lists whilst continuing to utalise E2.

I do like the addition of Titans as I have some very BIG models in my 15mm collection.

this is only natural in the early days of an edition.

Generally, I’m happy with my V3 armies; especially undead and basilea. As I don’t have my uncharted empires book, I don’t have a complete overview of these armies.

The former Warhammer armies that are now merged into panithor will have some time adjusting.

Overall I am happy with the changes as the Brotherhood is now something I really consider playing over a more generic KoM army.

My question for those who struggle with the split, are allied units are artefacts to not an option or is it more of a background problem?