Figured I would show my WIP TK in hopes that I might actually go a bit further and finish them. Warning, some of the models might be considered NSFW.

A bit of background, I got interested in kings of war due to me buying a box of skeletons for my dnd collection, and being extremely happy with the quality. I read the first edition rules and wanted to make an army. At some point I decided on twilight kin, partially due to kickstarters I backed. So I slowly gathered minis for it, testing it out a bit in second edition while waiting for an official list. Now we’re an edition further and I hope to actually have an army, especially since my fiancee has taken an interest in the army and claimed several models to paint (an important step to getting her into the games bwuaha).

The vast majority is from Raging Heroes, namely the TGG2 kickstarter. For those of you unfamiliar with raging heroes, they are a French company that makes extremely beautiful but fragile models. Their tgg2 kickstarter had some serious growing pains in production, as they were switching from metal around that time. Everything from the early production waves is so drenched in mould release that they sweat it still years after, defeating all my attempts to wash it off and preventing priming in the worse cases. In desperation I gave up on priming and went straight to the plastic with oil paints. It worked, but took weeks to dry enough to handle.

Plus side, I fell in love with the ease of blending with oil paints.

Heroes
The first model is a raging heroes dark elf high priestess from their tgg2 kickstarter. I used it to test the color scheme I wanted, and was quite pleased with the result. 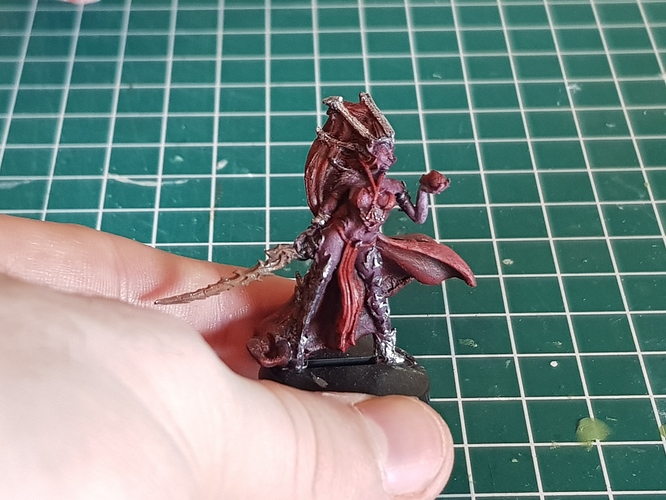 The next is Raging Heroes Onyx as a twilight assassin. This was a freebie in the kickstarter, suffering badly from the sweating release chemical issue. I am calling it finished for now, the model doesn’t quite inspire me like the other ones do. 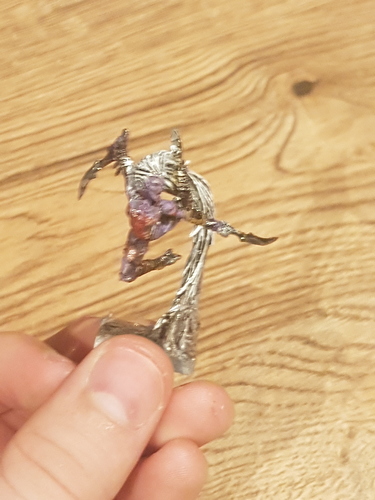 This is one of the limited edition metal models from the kickstarter (I got as much metal as I can because I am a metalhead and the models are extremely fine which makes them a break risk). I can use it as an elven prince or filler in a unit.
((Pic pending))

Here is a standard bearer, not from the kickstarter and metal/resin mix. Its basecoated, and I look forward to finishing it soon. 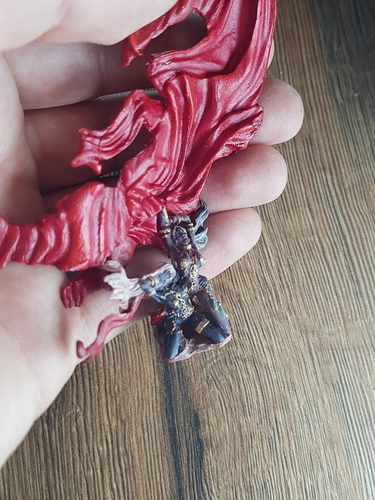 Infantry
For the units I am going minimal unit count-ish, to accent the elite nature of dark elves.

Blade Dancers
For blade dancers I am using the old metal Raging Heroes Blood Vestals. Currently base counted the skin. 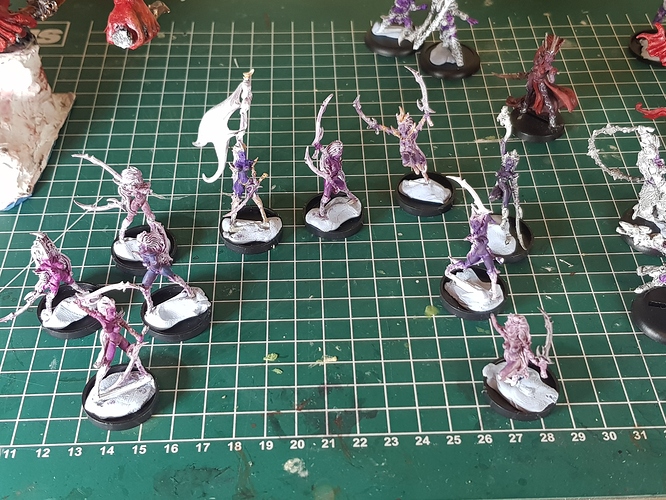 Impalers
For impalers I using Privateer Press Satyxis Raiders. I really liked the newest version of the models. 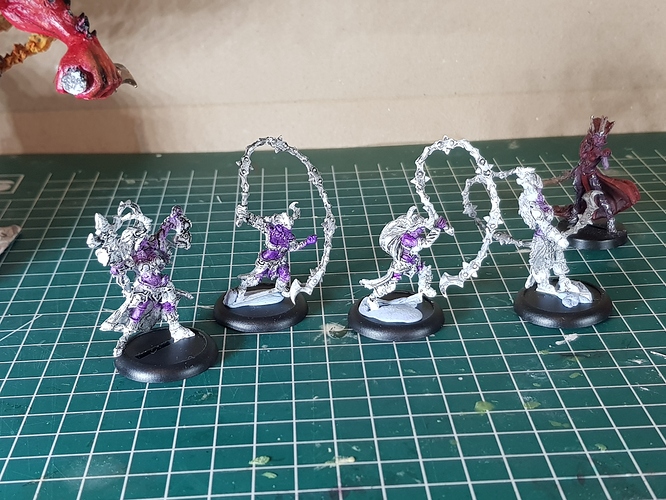 Kindred Archers/Gladestalkers
I also have a set of Raging Heroes crossbows that are now ready for play on the table. Considering that I doubt I’ll use archers, they will be gladestalkers, though I might use them as archers if I ever change my mind (but alwaysthe same in one list to prevent confusion). A lot of detail work still to be done, but I like where they are headed. Here is one of the troops: 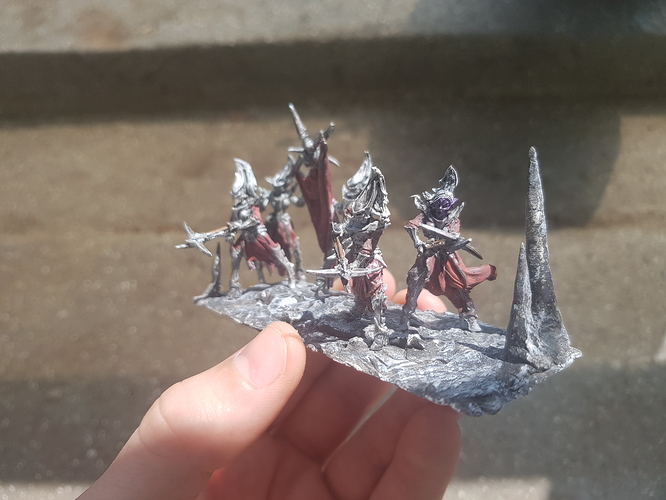 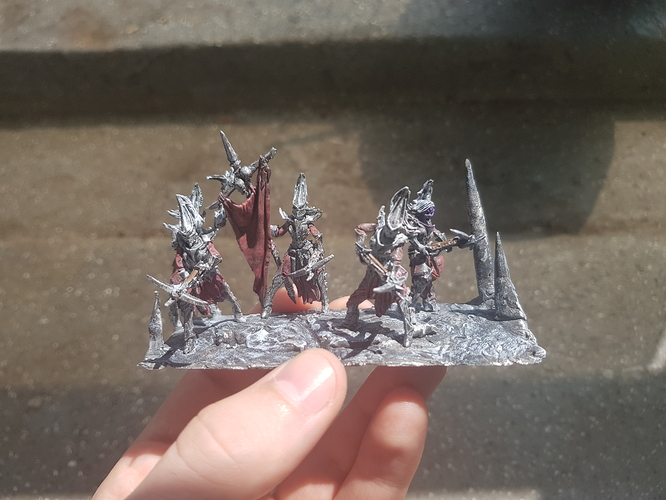 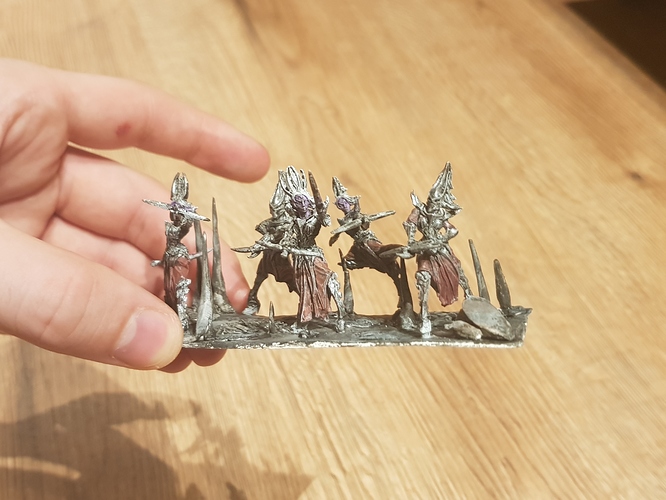 Kindred Tallspears
If I ever expand I think I will get some of raging heroes spears, I really like them.
Update: I got a deal on the spears thanks to the special dark elf flash sale, so I have a horde of spears now waiting to be assembled.

All the cavalry/chariots I am multi-basing into two regiments of cronebound abyssal horsemen. Here is a mock up for one of them, the idea is they are exiting a portal (the vertical plastic is a stand-in) 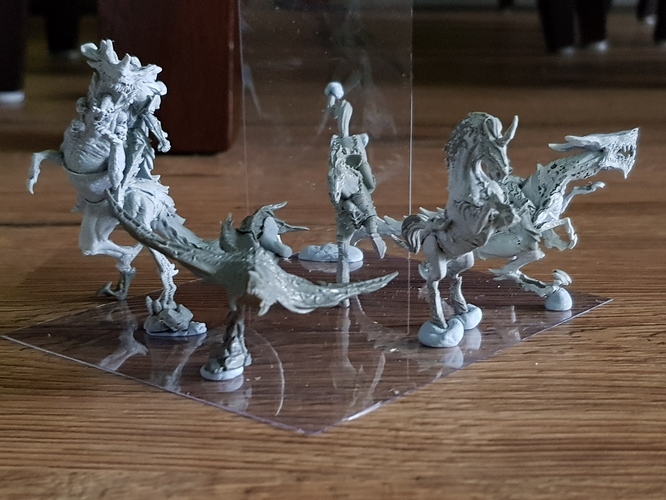 You can notice the primer peeling off of the lizard in the right of the picture. Its been washed 3 times and given a loooong time to rest between the various washes. Looks like oil paint might be needed for them. The horses took the primer a bit better fortunately, and can get painted with acryllic (which my girl is working on, currently the chariot show below) 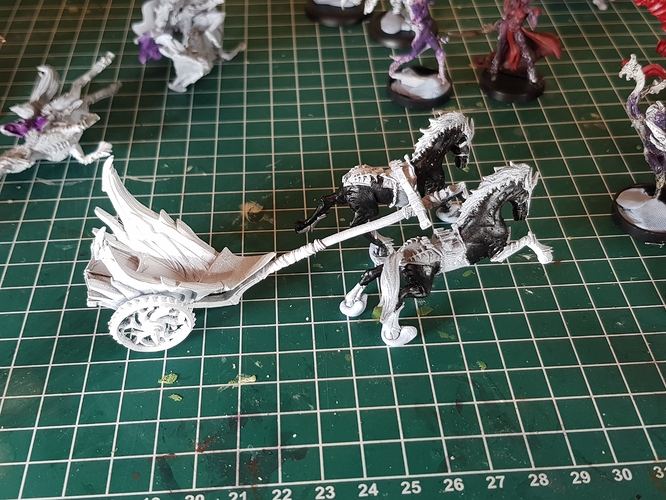 A WIP of the demon, the skin is done (my photography is failing here, there are 7 shades of red blended together and you can see that a lot better in person). Everything needs quite a bit of work, though I am happy with the color scheme of the wings, just need to get the coverage better, and the underside needs work. The base is built on a 75x75, and what you currently see is just a support structure to weigh down this very top heavy model. in those white pillars are various large pins crossing and going up into the legs of the beast 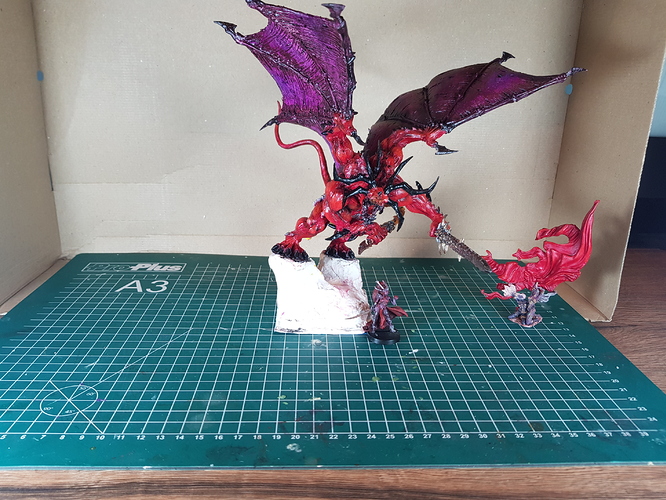 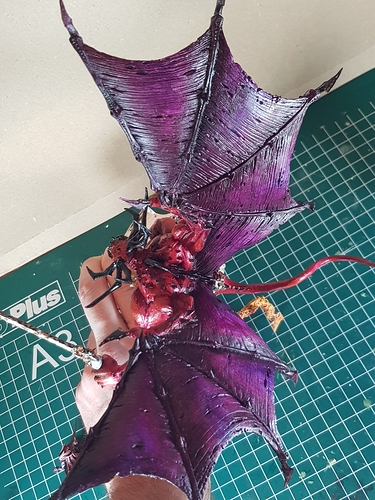 The model is from Heresy Miniatures (one of my favourite shops, the owner Andy Foster is a really good guy), it’s the Netherlord MkII with wings.

It’s been a while, but thanks to covid-19 I’m stuck at home doing research while being on call as support for the local hospital. While waiting ready to leave to work at the drop of the dime, I’ve been progressing on the TK. I’ll update the pics in the OP tomorrow evening but here is a preview of the crossbows wip: 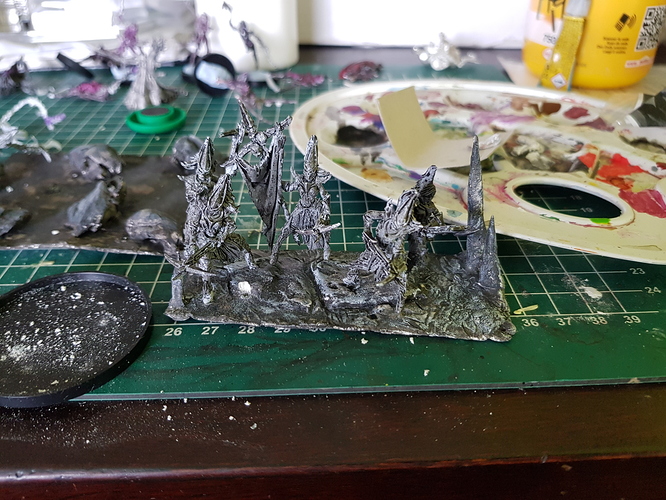 ), the standard bearer has been improved and based. The priestess now also has a finished square base and is done. The demon’s base might also be finished by tomorrow evening as well.

Good luck with all these Raging Heroes! I backed TGG2 with the intent to use them for KOW … and then never took the plunge, moving on to minis that are easier to work with

Glad to see somebody else going through with the dream!

Yeah, honestly I am not sure how I feel about my decision to go raging heroes. The models are amazing without a doubt, but when something snaps (high chance as they are super fragile) the connection points are so small usually I can’t pin it and makes repairs insane.
Their metal is slightly better as it can bend quite a bit before snapping so survives accidents better but the joints of the standard bearer was a nightmare. I might take a pic sometime zoomed in to one of the out of sight connections of the arm, I couldn’t even get them to connect so it’s just floating separately from the hand that is molded to the other figure. The old blood vestals being 1 piece casts in metal are super though. 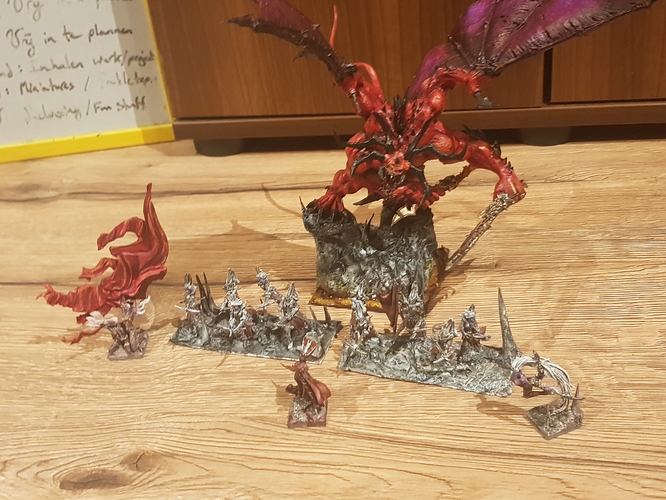 Going to be working on them almost all day today, so I figured I’ll post an update and edit in pictures as I finish them.

I happened to be going through my display due to an unfortunate incident with a shelf getting knocked and damaging some of the minis I have had painted for forever. Among the mess I found two minis I can add to this army. One is a very large drider from reaper bones and the other the harpy queen freebie from the raging heroes kickstarter that I used to practice my blending on to results I was quite happy with.

I have put the harpy on an appropriate 20x20 base, figured I could use it as a cronebound banshee for now. Maybe someday I’ll get a set of harpies from raging heroes and make some cronebound gargoyles from that, although I do like the mantic ones so I’m not sure.
Here is the harpy, done in 95% oil paints 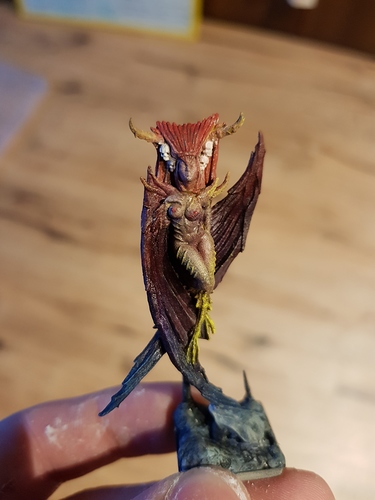 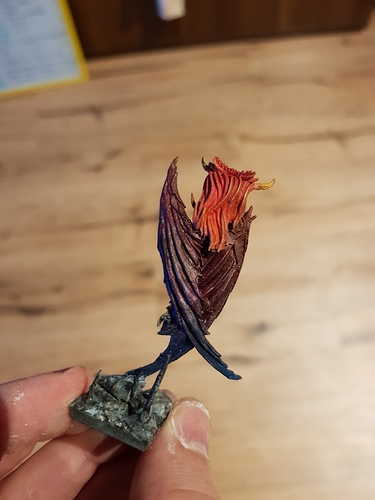 I currently sculpted the rough outline of the base for the drider. I need to work more on the base and fix the damaged paint on the drider. I am thinking stat wise to call it a shadow hulk, it really needs a titan base and it’s the stats that match it the best I think. Here is a poor quality picture of the progress 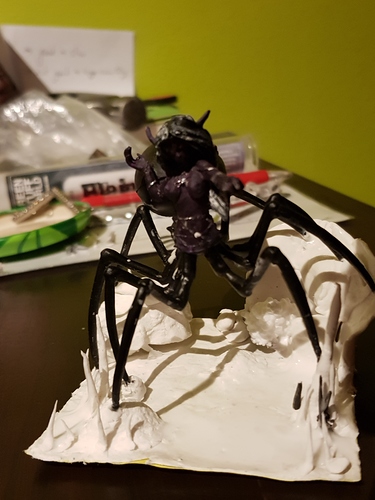 The blade dancers will have their base finished today as well, I have sculpted them a new one that I plan to make splitable in troops and regiments. Just waiting for it to dry then I can add the magnets and paint the base. 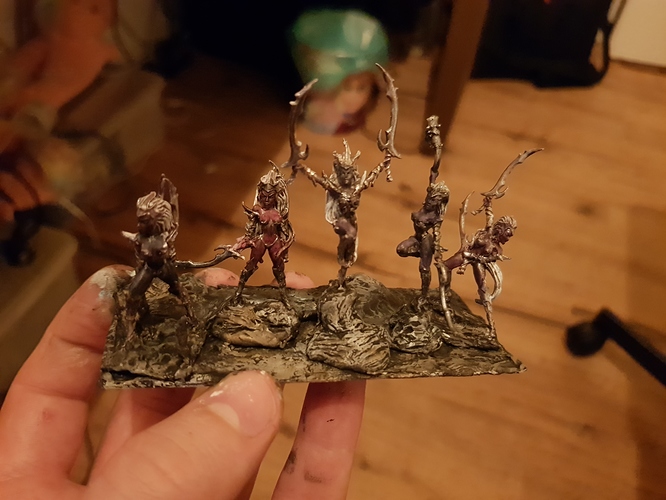 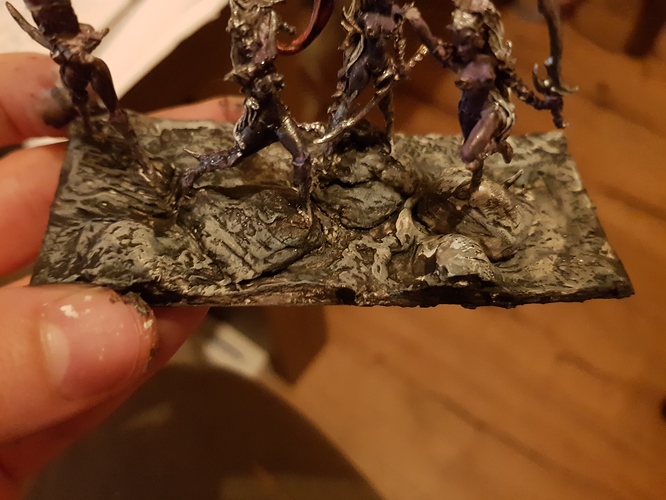 20200429_2331554032×3024 3.33 MB
The two troop bases are sculpted so they flow into each other to form a single regiment to give me choices.
Unfortunately one magnet tore loose and another individual base got roughed up so I have repairs to do but after that they are table top ready.

Today I also hoped to sculpt the bases for the cavalry and to make some cavern themed scatter terrain to go with the army, but didn’t get to it as I randomly decided to base my troll and work on my water elementals for DnD instead. I did clean up a sorceress so it is ready for assembly.

Your army is looking awesome.

I have always loved the fluff for twilight kin and your bases are perfect for them so great job.

Here is an update on the shadow hulk (drider). Been mostly working on the base though I fixed some of the damage on th er figure itself 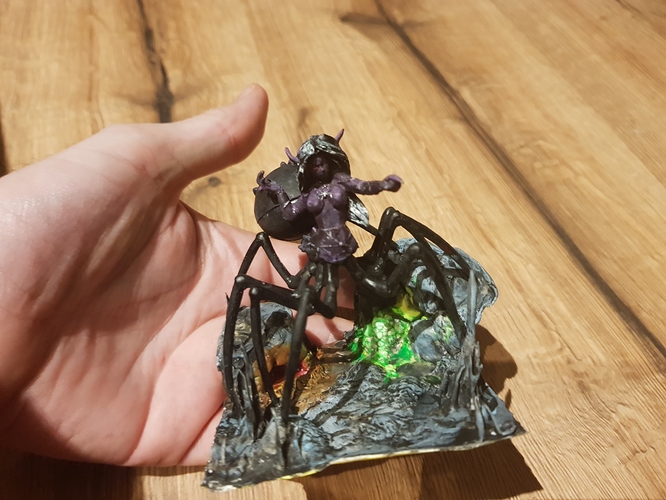 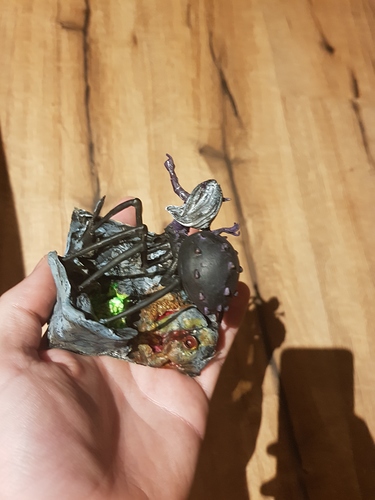 Going to hit the too bright spots with some dark wash, was overzealous with the yellows and oranges.

Also I repaired the damage and my blade dancers are table top ready! 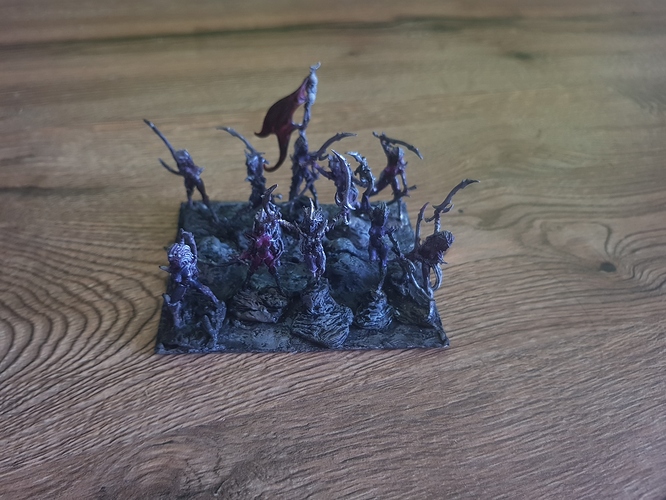 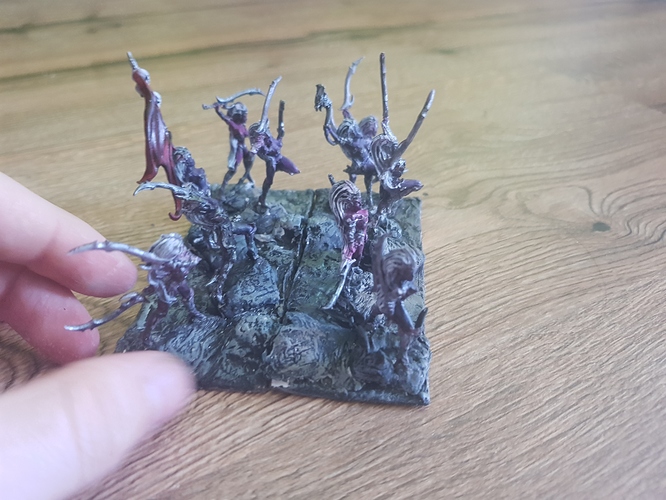 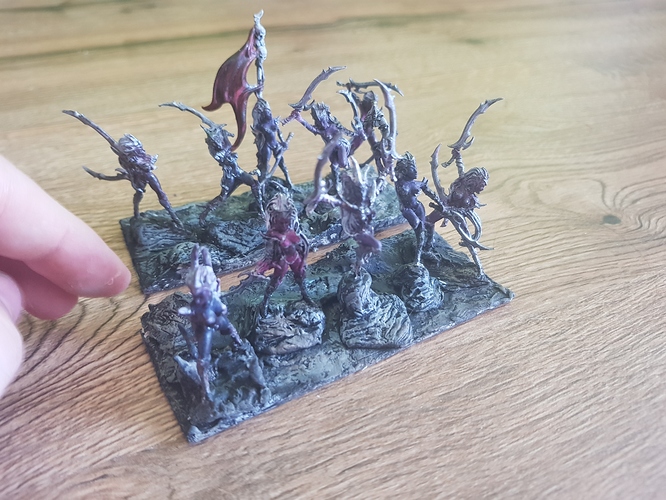 I received some new paints as a present and happily went to work trying them out. And there was one model that I instantly thought of for some trial and error… 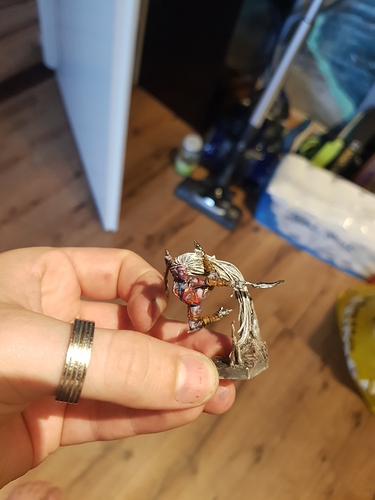 I made mistakes and learned about my new paints but the end result is already miles better than the slap job I did to get some paint on it.

I decided to use my new paints on two more heroes. This one I have no idea what I can use it for in my army (it was in use for dnd games unpainted already) 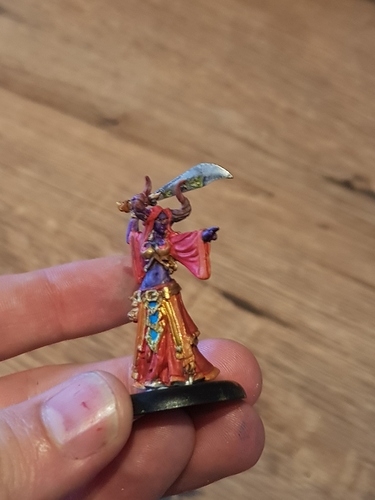 And going for a darker skin tone on my cronebound summoner with scepter: 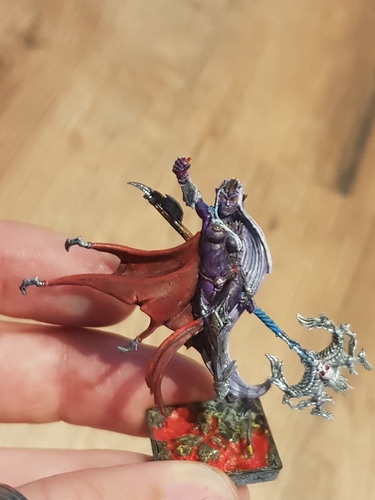 Thanks for the tip! I’ll remember it if I bump into anymore of the super sweaty ones. 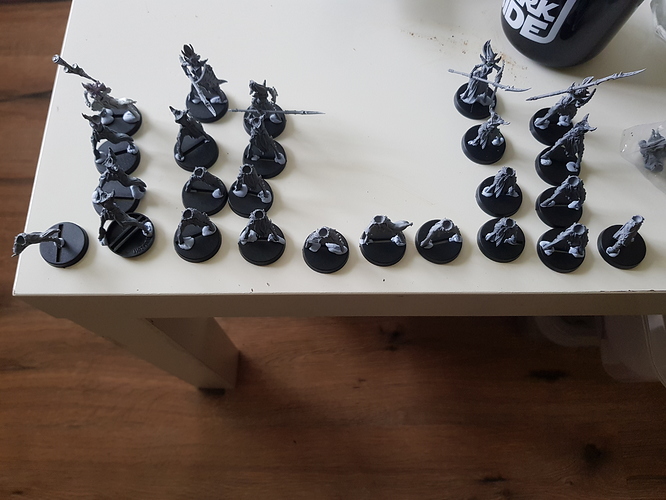 Building my spear horde today. I feel like you can really see the advantage of raging heroes ball joints for units in this case. By merely attaching the body to the legs I am able to get 4 poses per leg set easily. Shown below. 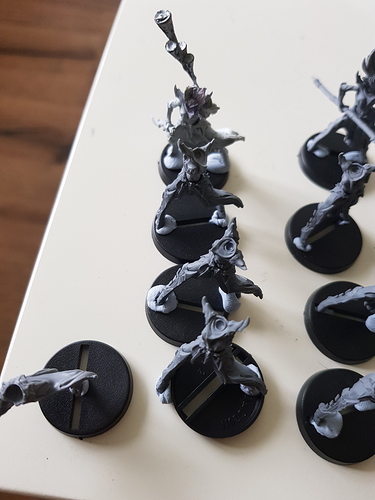