The only way to get these is either to buy the Mega Army box and get saddled with the rest of it, or buy the Vanguard box and get a measly 2 for £30!

I know they are on a sprue with other Vanguard bits so it’s impractical to sell them separately but they are a really useful unit!

With the advent of the new formation, I want to make some Lancers but i’m very loathe to use the old sculpts.
What can be done?

Probably similar to @Dave answer regarding some of the other bits from the Vanguard sets? Ie there isn’t really one at present.

That’s more complicated. LoI is yes with a *. *but I think there’s an intention to look at doing something with those should Elves get a launch. Won’t know until that happens, if it happens. Northern Alliance was about maximising the range with what resources were available at the time. The alternative would have been not including those units in the army at all. There were plans in the past to do a separate release but finding the time and resources to do it has been difficult. You’ll notice…

Or get Panther Lancers and and don’t glue the lancers on! The mounts are separate to the riders.

Ah but the old ones are Hot Garbage Dave!

Plus I want them in order to make Lancers…Convert from Vanguard sister torsos and generic cav legs, sitting on decently sculpted panthers…

I can dream eh?

Yep I’m obviously going to need to scour the secondhand market, but my point was more that a really good utility unit is not available as a separate release.
Now I realise that if you look at it another way, Mantic have done us a favour by giving us a KoW unit that was basically invented and envisaged for Vanguard and in that sense, and in the context of a model agnostic game, it isn’t a problem, it’s a bonus. As you say, use those Griffin things or whatever.

Not an option for me as my army is full Mantic and it’s somewhat frustrating not to be able to support the company as a fully paid up fanboy and I’m sure it’s frustrating for Mantic to not be able to put out full ranges.
And maybe it’s because Mantic are constantly punching above their weight that it seems weird that they make a product that cannot be purchased in the quantities that their rules allow. Maybe it happens all the time with other companies though, I have no idea. Maybe you have to buy an army box from Warlord in order to get a large quantity of Scots Grenadiers rather than get them separately I dunno.

With certain companies you only get rules for models they make, then when they stop making those they remove them from the game entirely!

‘certain companies’? Have GW slapped you with an NDA lol?

I’m not sure I wouldn’t prefer that in a way (except for the last bit). Its annoying that I can’t just buy the models I want from the company without getting a mega army or lots of useless Vanguard bits

I forgot to mention that it is somewhat perplexing when introducing others to the game, who have previous experience with ‘certain companies’ and you tell them ‘oh yeah Mantic don’t make that unit’ or ‘oh yeah you have to buy this to get that etc’. Can be somewhat offputting to them.

If you are ok with going non-mantic I can highly recommend oathmark gobiln wolf riders for their wolf models. They are separate from the riders entirely, have appropriate size and you get 15 wolves per 30€ box aka three troops worth.

I am very happy with them for my norse themed basilean army: 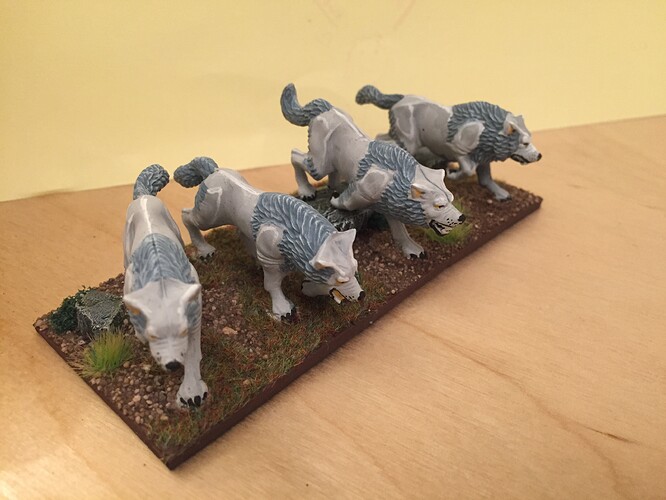 Thanks! But check out my second post - my army is all Mantic

Just like Huscarls and half-elf berserkers, the whole “Vanguard as a testing place for models” is just a mess. Its a good idea in theory, but if it leads to the models never getting a proper release, its kind of useless.

At least with the Abyssal Dwarf release you can buy all the models because they are either hard plastic or resin. Which means its expensive to equip all your Golems with the breath upgrade but not impossibly so - a repack of three of the flame guys as a regiment isn’t too difficult probs.

would Tundra Wolves work instead of panthers?

Nah I prefer to keep in fluffy. Plus the Vanguard sculpt have such a sense of speed and motion in them!
I’ll scrape em together somehow! I actually managed to get my last lot together from Mantic event goodie bags and painting prizes, maybe I need to start booking more of those lol

there might be someone who doesn’t want theirs. I donated them from my mega army to someone else