Hey there, I’m new here and I’m interested in what you guys would recommend as model choices for the Varangur faction (I’m personally more interested in starting with either Dwarfs or Northern Alliance). Due to my current lack of any of the rule books (I funnily enough have the warpath and deadzone books due to their being free), I don’t really know which units correlate to which models exactly. I know that Mantic Clansmen and GW Chaos Marauders work for the basic Varangur Clansman unit and that the Chaos Marauder Horsemen can be used for the Melee Horsemen unit, the Darkoath Chieftain could be used as a Lord (or any Chaos Champion would do), my biggest concern with GW models however is the price.

So maybe you guys have some better advice.

Hi! Yes, originally the varangur seemed tailor made to bring over any old chaos armies. But I think it would be cool to step away from that and just use northern alliance, converted and painted more evil looking, and mix in models from other manufacturers as well. Maybe even some GW as a last resort if you do not find anything good.
Others are probably better than me at giving specific suggestions for manufacturers, but I can think of:
Mantics own Northern alliance models
Fireforge Forgotten World Northmen
Fireforge medieval Scandinavian infantry
Saga Vikings

Shieldwolf Miniatures do lovely Shieldmaiden models , and Frostgrave are another option for clansmen ect. Also check out Oathmark miniatures and for cheap cavalry units Victrix or the Celts chariots from Crusader miniatures might work at €10 a pop,
There is a Varangur facebook group with a lot of altervative models you can check out, although the Northern Alliance models from Mantic are very good too, with a few units of zombies for Draugr ect.

You have a lot of model lines to choose from for Varangrr these days, and I’d say it depends on how much you want to spend, what you want the army comp to look like (lots of different kinds of infantry? lots of knights? lots of large infantry / monsters?), and most importantly what models do you want to paint / push around.

A great many Varangur armies in 2E were converted over from WHFB Chaos Warrior armies, which is fine and cool. You’ll primarily want to use eBay and used sources if you want to recreate this look, as many of these kits aren’t supported by GW any longer, or if they are, then they’re selling reboxed ancient kits for $$$ (like the old chaos warrior plastics). In which case aftermarket is best. Going this ‘old chaos’ route also lets you use loads of OOP Chaos models, if that appeals to you.

GW has finally updated the mortals part of their Chaos ranges, from the basic ‘Chaos Warrior’ (now called Slaves to Darkness and/or Darkoth stuff) to the Tizz mortals to the upcoming Slaanesh mortals. If you want to spend $$$, these would make for some awesome armies. Personally, I’d lean heavily on the Start Collecting S2D set (https://www.games-workshop.com/en-US/Start-Collecting-Slaves-To-Darkness-2019?_requestid=8265104) as the savings are decent and all those models are usable and good in KOW. It’ll be super elite, but that’s basically 1 Huscarls regiment + 1 Knights regiment + 1 Hero on Frostfang. Or a whole unit of Frostfang if you bought 3 O_O Toss in some Fenrisian Wolf kits for wolf troops and you’re actually on your way to something!

Mantic is absolutely an option as well, and will be far cheaper if not as visibly EEEVIL as the S2D option. I also think this is the better option if you’re looking to run a lot of Draugr, as the Mantic zombies are very good and the GW ones are horrible. (I’d say … converted poxwalkers?? if you wanted to go full GW and use Draugr.) Pretty sure there isn’t a Mantic option for Varangrr Knights though, so this is more an infantry + frostfang hammer sort of list … which you could basically do with Northern Alliance, as knights are the Varangrr thing.

Anyway, that was a lot. I’m sure Varangur groups have ready made lists of minis if you want them, and like I said, a lot hinges on how much you want to spend and what overall look and feel you’re going for. It sounds like you’re most familiar with GW, and I do think the S2D starter box angle is a concept. Here’s a quick example of how off-the-shelf GW S2D might convert to KOW:

That’s 3x Getting Started S2D (3x Karkadrak = Frostfangs, (2x) 7x Knights = Mounted Sons, (3x) 10x Warriors = Huscarls), either a bunch of Dire Wolves or Fenrisian Wolves (12ish), a Chaos Lord or Darkoth hero if you prefer, and you could probably convert a leftover knight into a mounted Magus, as there aren’t a lot of modern GW options. Chaos Warrior wizards aren’t wizened old milksops anyway, so it checks out and will fit with the mounted dudes he’s riding along beside.

^ This isn’t an amazing list, but it’s extremely smashy and tough enough to get there in most cases. It’s also a decent start to begin learning the game, especially how to use chaff, that you can expand from with some War Cry warbands or whatever new Chaos stuff you like the look of. And maybe you try to jam Archaon onto a 75mm for your King on Chimera

As some of the others have commented, Varangur in 2nd ed was effectively a refuge for wfb chaos armies - now mantic are moving the vibe away from that (although perfectly doable with gw stuff).

You can do similar things with other historical ranges - samurai can work nicely for example.

As mentioned above, if going gw the Start Collecting sets are decent value (you basically get the ‘big’ thing free) and you can pick up some of the slightly older models pretty cheap

Old plastic chaos warriors from 6th edition WHFB and old metal chaos knights are the best if you can find them. They are spitting image of norsmen from the movie Pathfinder which are essentially Varangur. Big, nasty and full of spikes.

The other gw bits that can work are ghouls as draugr, the crypt horror efforts as trolls (and the dragon as a chimera if you get the starter set).

The (shadespire?) undead warband can make a characterful fallen unit

Looks good, and thanks for the advice. I think my options for the clansmen (which I’m half tempted to make my horde unit) would be GW’s Marauders (since I’m American $80 for two boxes is relatively decent), Mantic’s Clansmen (the cheapest option at around $60 for two boxes), and Northstar’s Frostgrave Barbarians (slightly more expensive at $64 for two boxes whenever its back in stock). I’m more interested in both the former and latter options compared to the middle due to wanting my Varangur to be more villainous looking compared to my Northern Alliance (if I ever do start on that faction, once I’m settled enough in college to get a part time job I’ll probably have an opportunity to start the hobby if not earlier). Totally thinking about Warcry’s Untamed beasts as my Night Raider’s regiment since they look the part and come with animals in their box (are Night Raiders a good option?) But I’ll have to look to see where I can get them for cheap (No way I’m spending over $60 for 18 minis). Frostgrave is in my opinion the best option for getting spell casters due to being able to get 8 per box for under 30 bucks, and there is one box for male wizards and one for female wizards. Chaos warriors would totally pull off a regiment (or troop if I plan on saving some of the warrior minis for vanguard), just going to have to look for someplace where I can get them cheap.
I have no idea what the Fallen are even supposed to be, got any ideas? I’m mostly thinking on 1000 point games for Varangur (they are raiders after all). Here is a list I made on easy army if you wanna have a look. 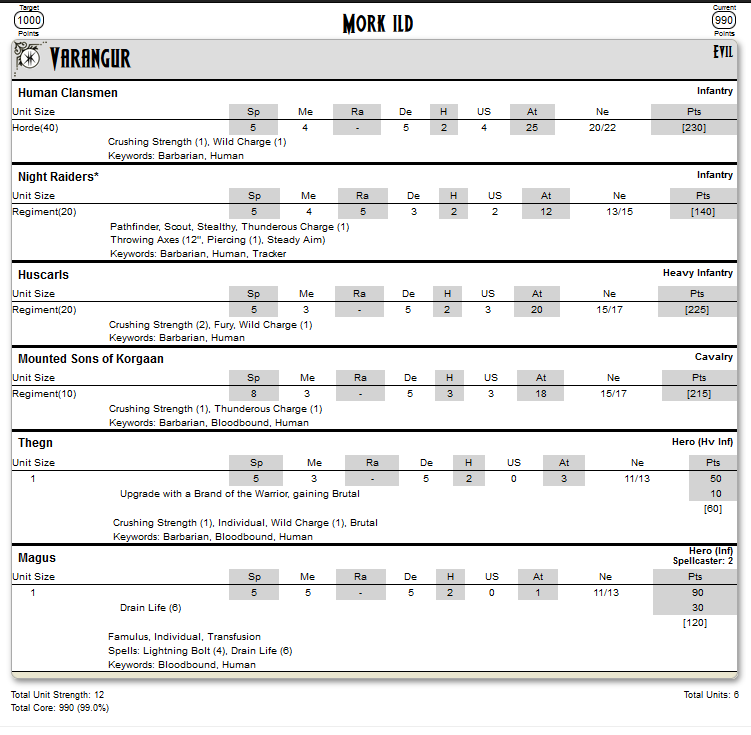 Not a bad start! You’re going to want some Inspiring asap tho (auras that force the opponent to reroll successful routs for your units when they’re in them), maybe even 2 of them to start out:

The mounted sons are your real player here, tho the huscarls are a blender if they can make contact. You don’t see many night raider units on the table - they pay a lot of points for all those special abilities - but they’re super characterful and can do many things. Using Untamed Beasts for them sounds awesome! I’d actually suggest using War Cry for your clansmen as well - maybe a horde of Iron Golems here, another horde of Tyrant Lords there, etc - tho it’ll cost $$ … but then I really dislike the old Marauder kit

Fallen are mutated infantry, so you usually see some of the gnarlier Chaos infantry (Chosen or Blight Lords) or maybe Spawn. They aren’t technically taller than the other infantry in your army tho, so I’d say not Ogres or proper big dudes.

with Varangur being the old Chaos refugee list, I would go a different way if you don’t already have the models (old GW Chaos models have not aged very well and you get better kits for less)

Victrix Vikings https://www.victrixlimited.com/collections/vikings/products/vikings
and Gauls https://www.victrixlimited.com/collections/ancient-gauls
fit the Norseman theme very well and you get all units needed in the same scale/design (and parts are interchangeable)
using the Mantic models for the fantasy elements would make a good looking army for a budget 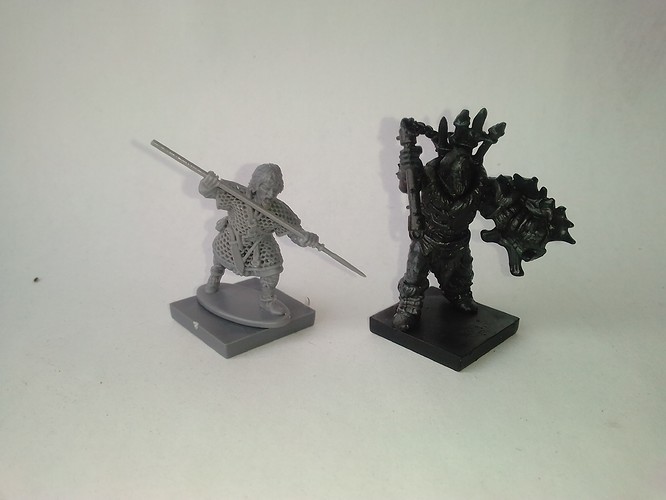 my own Varangur (to be worked on when i get my Roman KoM finished) are gripping beast plastic vikings for the huscarls, with GB metals for the leaders and such. planning to get Wargames Atlantic irish for the clansmen. possibly supplemented by some GB dark age warriors plastics.

I used the GB vikings as the Clansmen - they are fairly small compared to some other historical ranges (I’ve used a few bodies mixed in with Oathmark dwarves for example), but they are a solid model range. 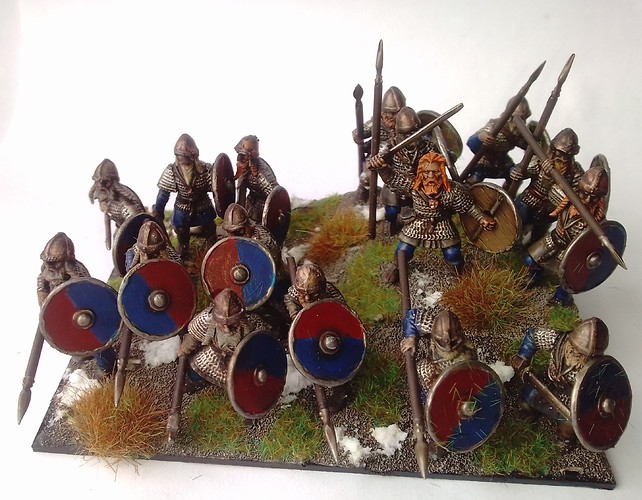 i figured Huscarls mainly because they are so much more heavily armored than the WA irish and GB darkage warriors (which are basically unarmored)
as long as the figure sizes are close enough to pass the 3ft test i’m not too picky, but the extensive mailshirts and helmets will be obvious at a distance due to the metallic color.

Yeah, will work fine with those two ranges.

The WA Irish is a nice kit.

Woah, those guys are small, definitely makes me think twice about using the Greek Victrix models for KoM. I like the sizes of my models to be consistent, although given the Greeks and Romans were said to be shorter than average it might work. Thanks for the image so I can get a size comparison.