I’ve been playing Forces of Nature on UB for a while (including through the whole of the recent Call to Arms 3 UB tourney). That’s helped me to decide what kind of army I want (FoN offering so many different builds) and to pick units. It’s going to be a trees and centaurs army, plus the odd pegasus, and unicorn.

I’ve just finished the first unit - a regiment of Forest Shamblers. I’ll keep posting progress here (as well as on FB in the Slow Grow Army Challenge and the Forces of Nature groups.

The pictures aren’t great, but the colour scheme and basing look good (to my eyes, at least) in the flesh. 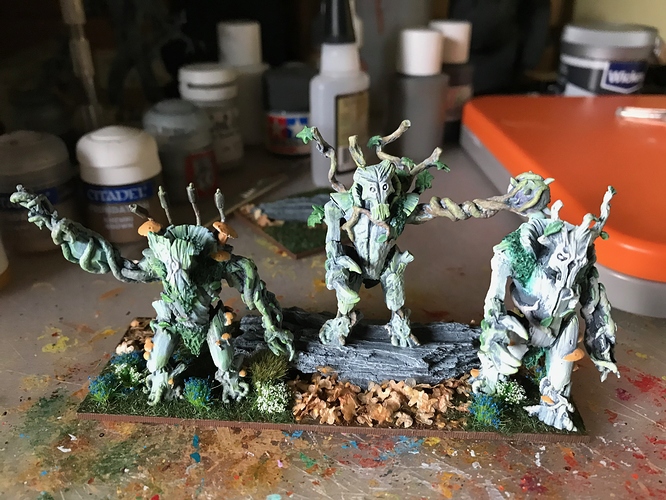 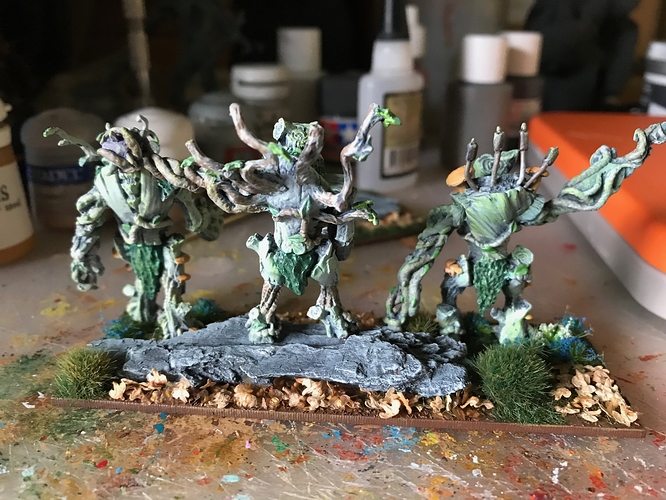 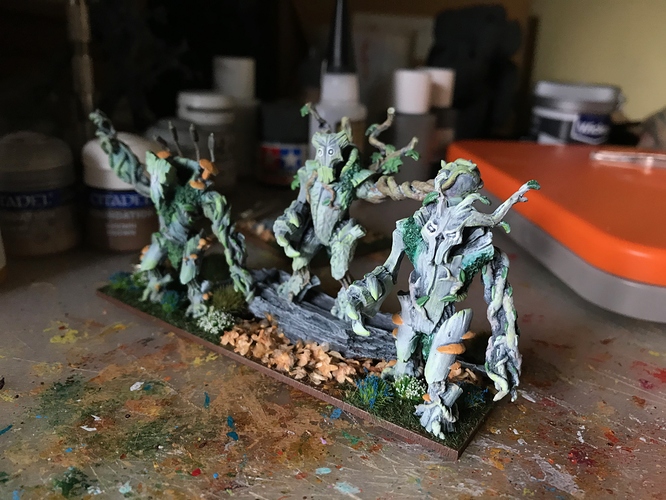 These look really good to me! I’m planning on (finally) getting my FoN army going as well.

I’ve got the bit between my teeth now on this army. It’s all trees at the moment: Two regiments and one horde of Forest Shamblers, a Forest Warden and a Tree Herder ready for the Ent Moot!

Prepping and assembling the Forest Shamblers feels like it takes as long as painting them, but I like the models and find that with the addition of model trees and chunks of bark / rock to the bases, it’s possible to get quite a bit of variety into the units. That’s lucky, as I’m not finished with the trees yet ! 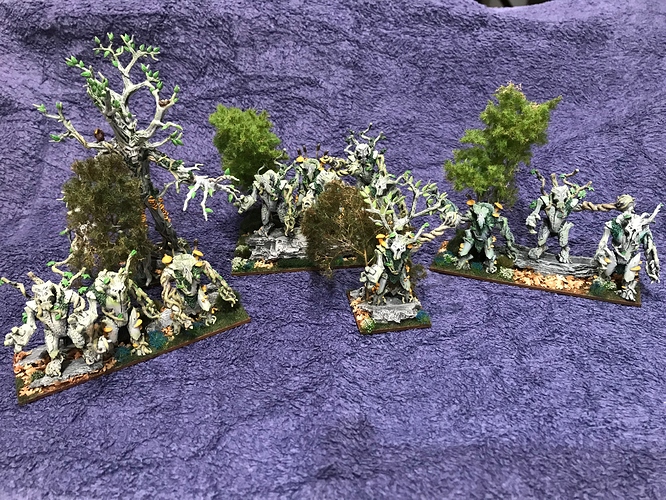 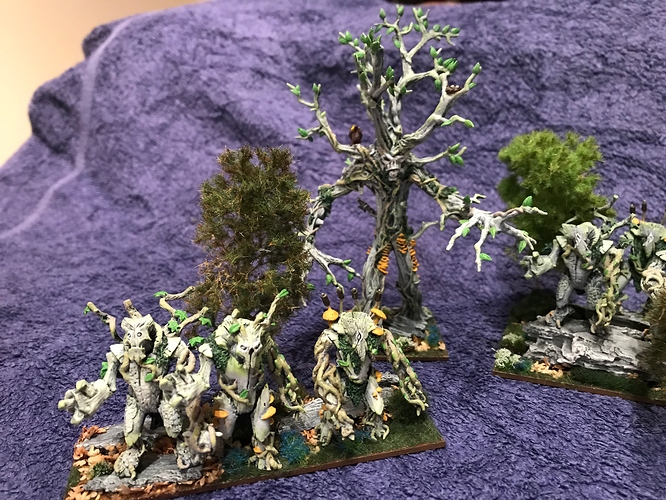 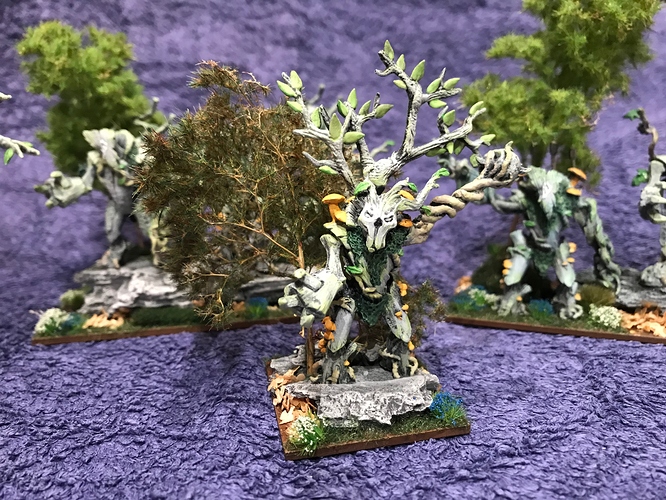 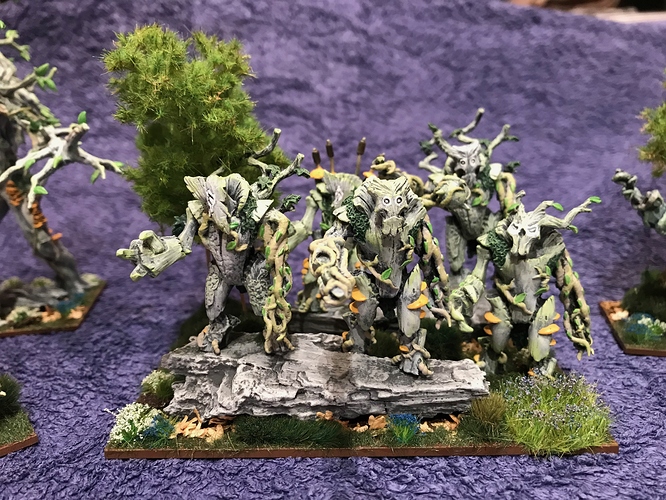 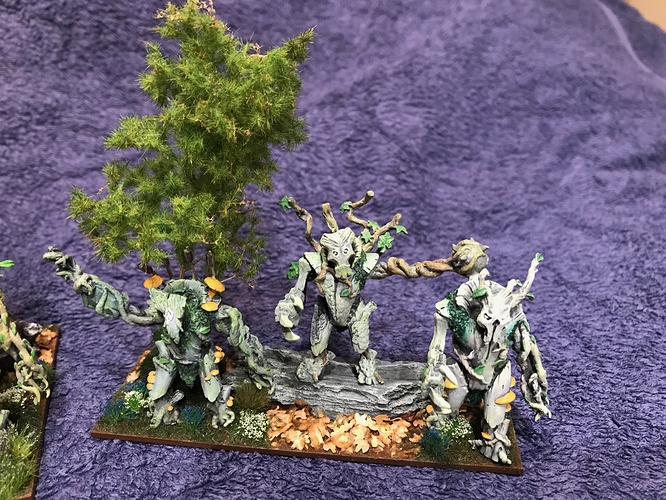 After a painting marathon, I’ve just about got 1650-points-worth of Forest Shambler, Tree Herders and Forest Wardens painted in time for tomorrow’s Franticon tournament (doubles on Saturday, singles on Sunday). A few units still need a bit more TLC, but I’m calling it tabletop ready. 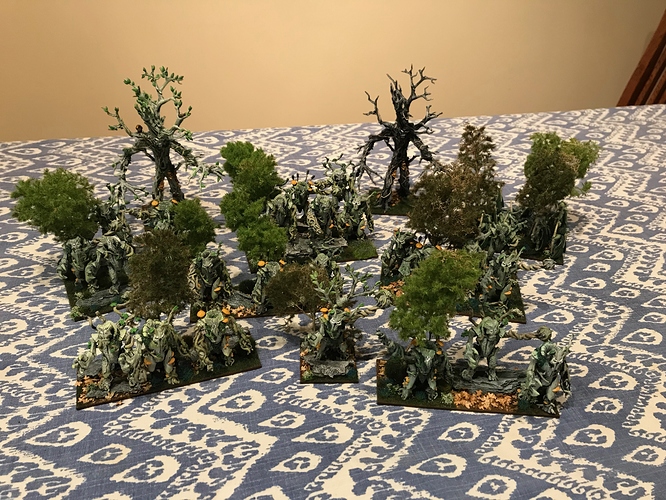 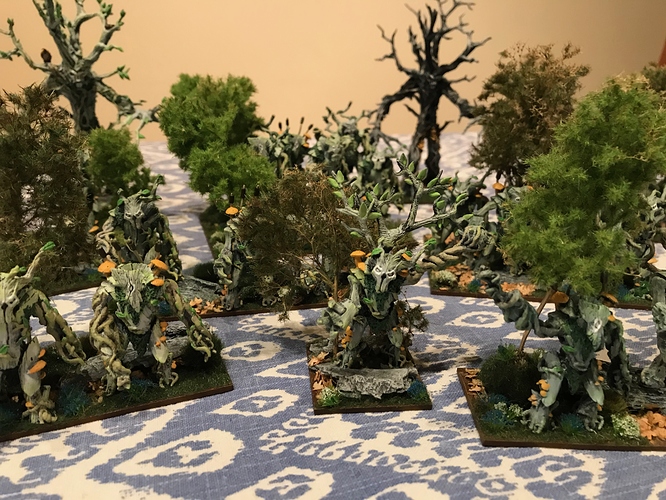 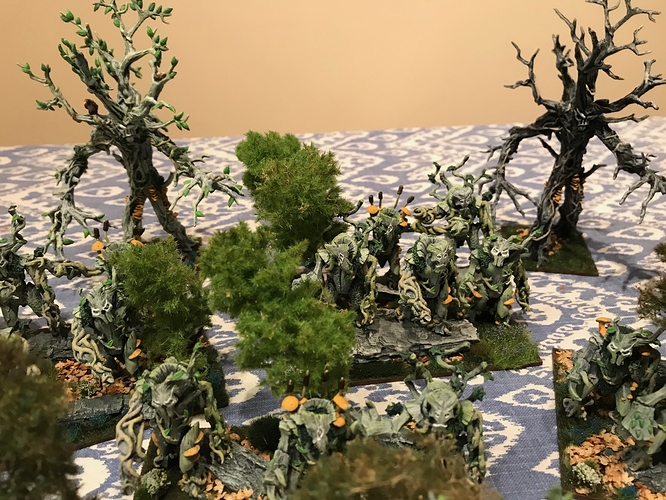 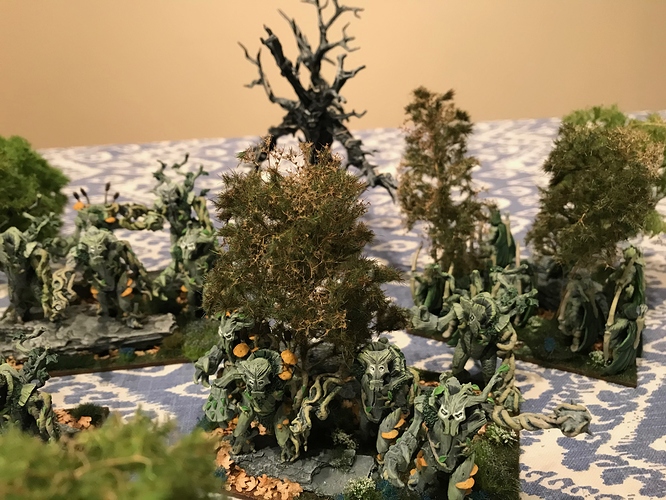 Let me know how your list does, it’s pretty close to the one I am sketching out right now.

That army looks great based and together!

I don’t yet know where I finished, but I had 3 wins and 1 loss, so I was very happy.

My list was:
3 regiments of Forest Shamblers
3 hordes of the same
Wiltfather with Sacred Horn
Tree Herder withChant of Hate
Forest Warden with Healing Brew

Nice work! I’m a fan of Mantic’s forest shamblers, less so the tree herder but still props on all the Mantic. And congrats on the 3-1 record!

3 and 1 is great. It means that the army is competitive and I am not just spending my time on a funsies project.

There might be a problem with your list though, I don’t have my book handy but I thought you couldn’t take items on unique units like the Wiltfather?

Ed - think given the specific wording they have put in place for some units (which restrict artifacts, being mounted etc) the lack of that means that you are able to take any other available upgrade/item. Wording in the unit selection red seem to imply that as well (ie it is a unique upgrade, not a LL unit)

It’s a bit murky. The definition for Limited Units on page 42 of the printed book says a unit is a Limited Unit if it has [n] after its name which “Upgrade to The Wiltfather [1]…” does. Page 45 under Magical Artefacts says "Unique units (i.e. units with a [1] limit) cannot choose artefacts. However, Unique Units seems to be a unit section like Cavalry, Monsters, or Titans in the army profiles. The Wilfather is not listed there but that type isn’t defined other than having the [1] after the name which it does. And lastly, all the other [1] upgrades I found, such as the Varangar’s Wolf Handlers, were worded differently than The Wiltfather so comparing to other unit profiles wasn’t much help.

Wiltfather isn’t a unit, it’s an upgrade. There’s plenty of other upgrades and spells that have [1] after them. Does a naiad envoy that takes Bastion [1] become a unique unit and unable to take magical artefacts? And in that case there’s two [1] upgrades in the same unit entry, one of which specifies the restriction on magical artefacts and the other doesn’t. It doesn’t seem likely that’s a case of sloppy rule writing.

I’ve read the rules to mean that only units that are in the Unique Units section at the end of each army list, where the unit itself has [1] against its name, have the blanket “no magical artefacts” restriction, and upgrades and spells that are [1] just mean that you can only take 1 of them with no additional restrictions unless specified in the description. It seems that whoever checked the lists for Franticon (King of Herts and EritBellumII) thought it was OK, though they might not have noticed it.

Anyhow, if you think it’s ambiguous, go ahead and put the question to the community on Facebook. It would be good to have a ruling from the RC.

I think that is a fair interpretation. I could see it going either way though. I’m hoping you are right because I want to equip him just as you did!

however my suggestion would be to contact mantic and request a clarification.

These guys are looking great!
Good job on the mushrooms! Did you just greenstuff them?

The mushrooms are part of the model, like the bullrushes on one of the figures (which are a bit fragile). I still need to do some highlighting on the mushrooms / fungi, but I am happy with the overall colour scheme.

The Avatar of the Green Lady joins the army… 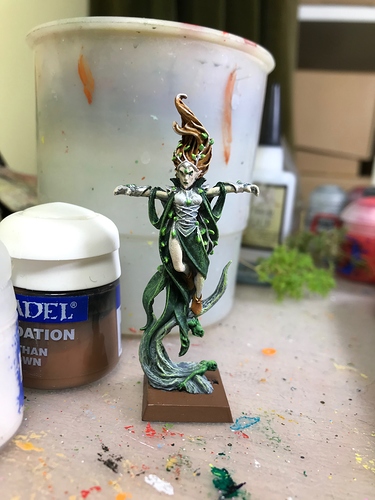 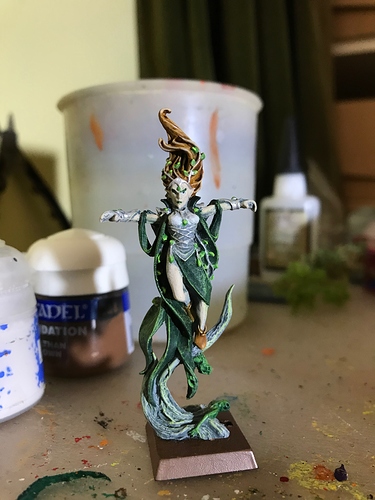 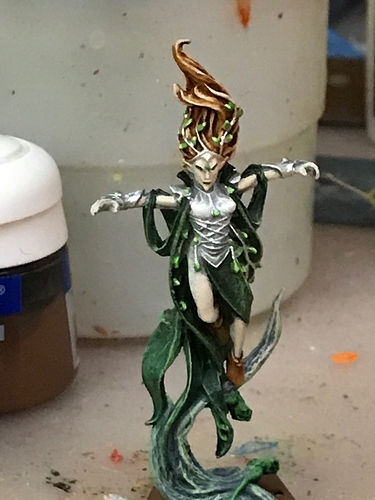 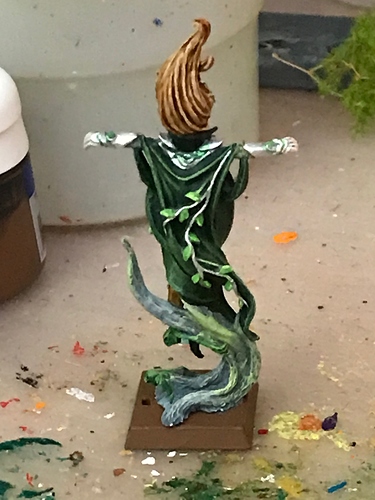 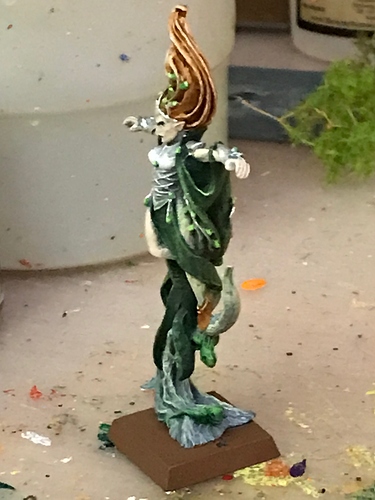 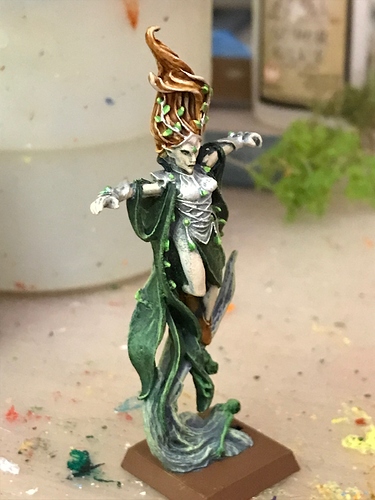 A regiment of Kindred Archers enters the woods. I did take these guys to Franticon, but they were done in a great hurry to just about gaming standard. I’ve now had time to add a few more colours and details. And yes, I did take them all off the base and paint each model individually rather than just working on the bits that showed! 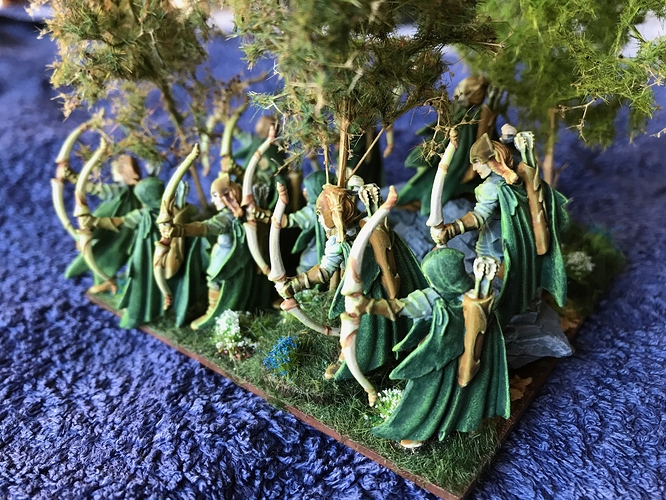 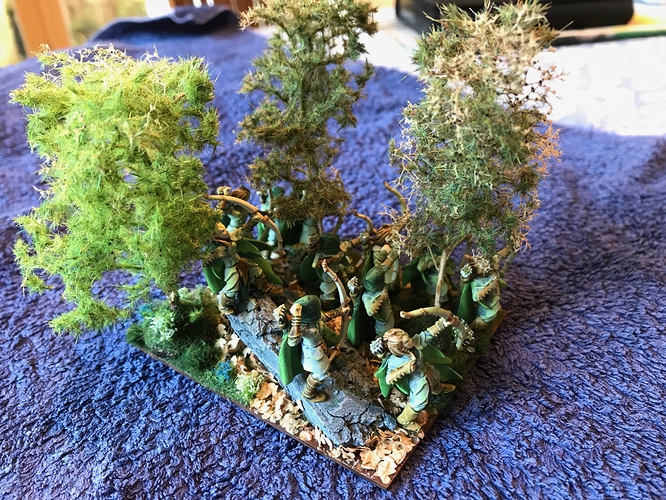 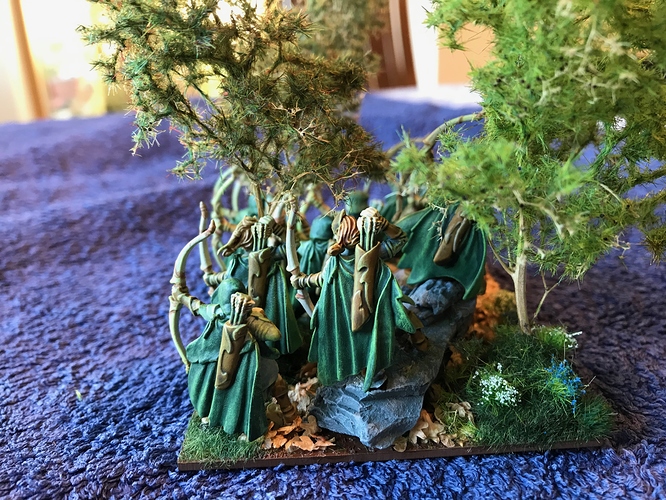 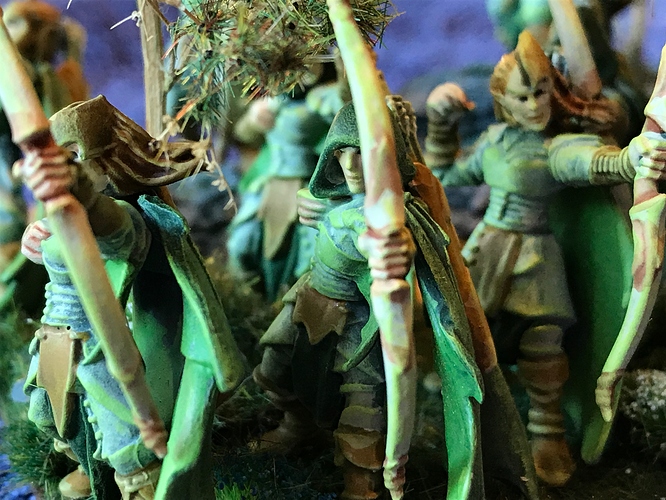