Currently I’m working on a 'technically not KoW project, although I hope that a revised Historical format will be just around the corner from Mantic. I’m bouncing between Celts/Britons and Romans on the Invasion of Britain, and I’ve just completed a unit of Roman Auxiliaries plus a couple of units of Celtic 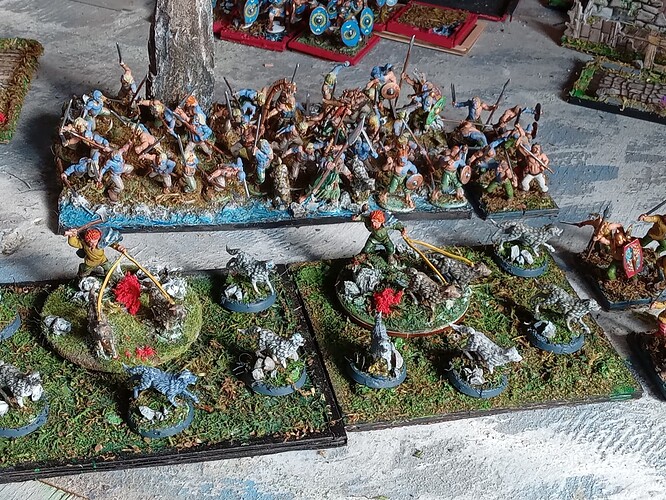 Thanks for the kind words @Nav

. I definitely did feel that a bit as I started to put minis on it. I never realized until I started hobbying for Kings of War how much I’d enjoy just making scenery and stuff.

iI can totally relate to that @Findol . I am the same myself, as can be seen in my previous post with my semi naked Celtic Fanatics defending the ford that marks the edge of their territory, (behind the warhound skirmishers)

Although technically I am experimenting with the Hail Caesar rules, as you can see, there are a lot of similarities formation wise, and it could, and probably will be replayed using Mantic KoW Unit Formations and rules.
Especially if you adapt the game with house rules, as I did.( Hail Caesar is really designed for big armies on a battlefield of 8*6 or larger. So, i’ve adopted a similar unit size to KoW, with troops as Tiny Units, Regiments as Small units, hordes being standard and legions being Large units.

After that, they are very different games, but both are great fun, (especially on the miserable wet Sunday that it has turned out to be. 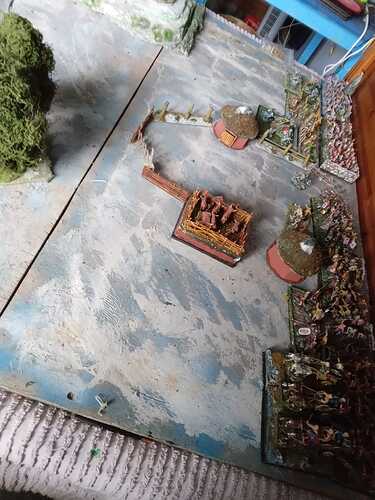 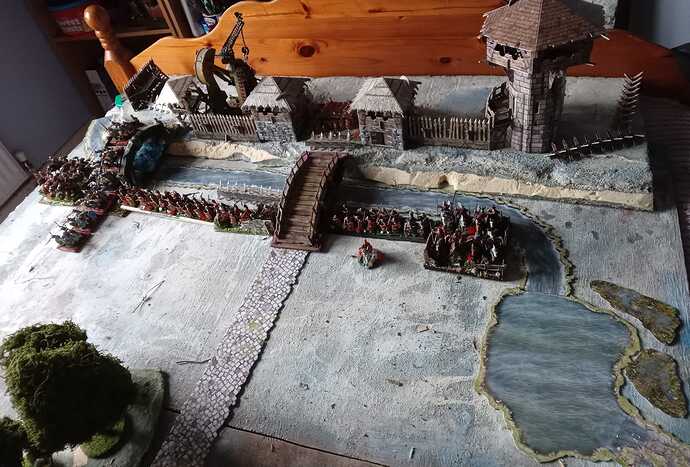 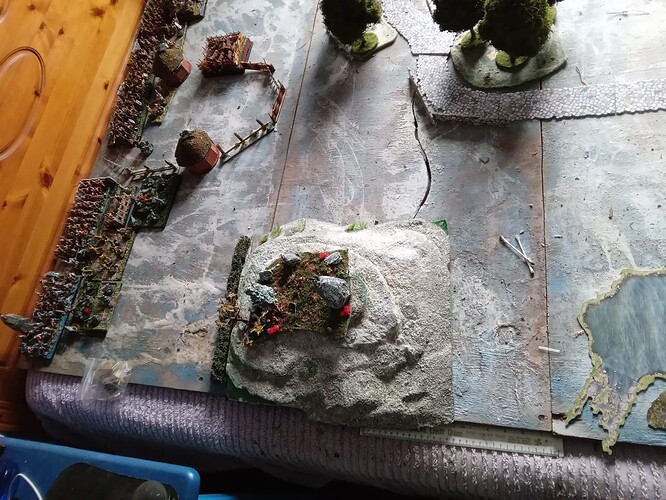 Getting close to finishing these guys. Batch painting is painful, but rewarding! 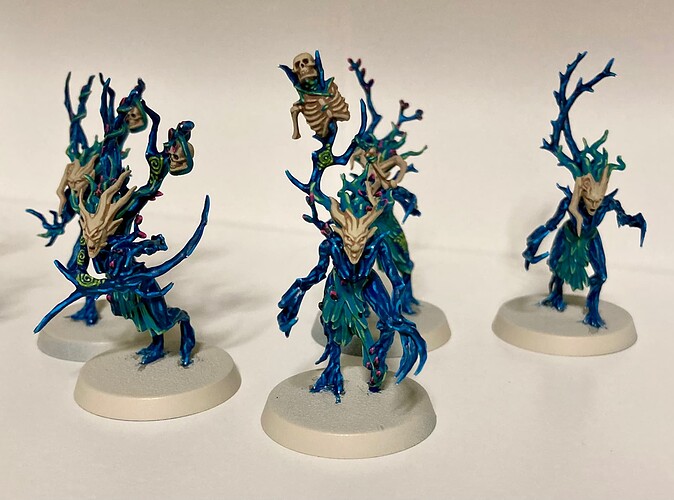 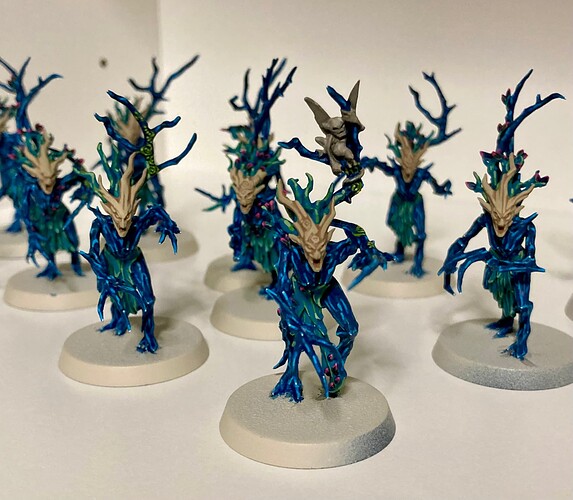 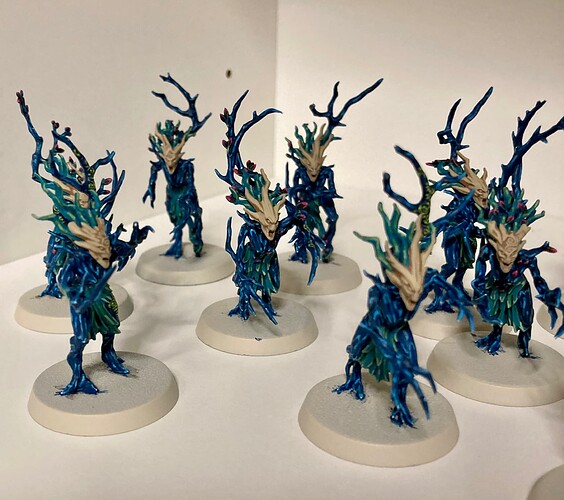 Varnished and based, hurray! 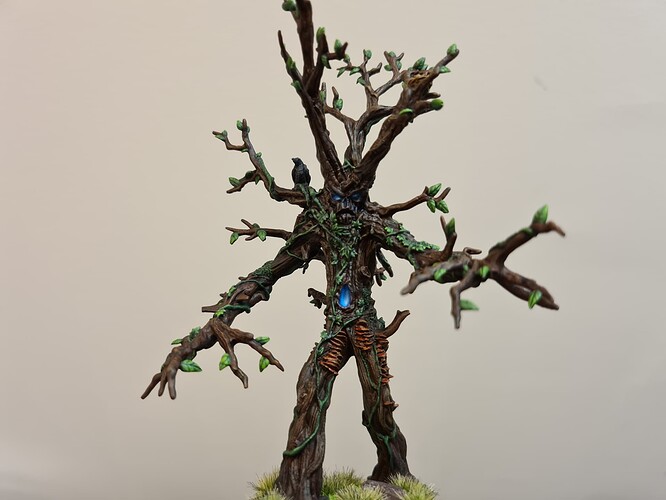 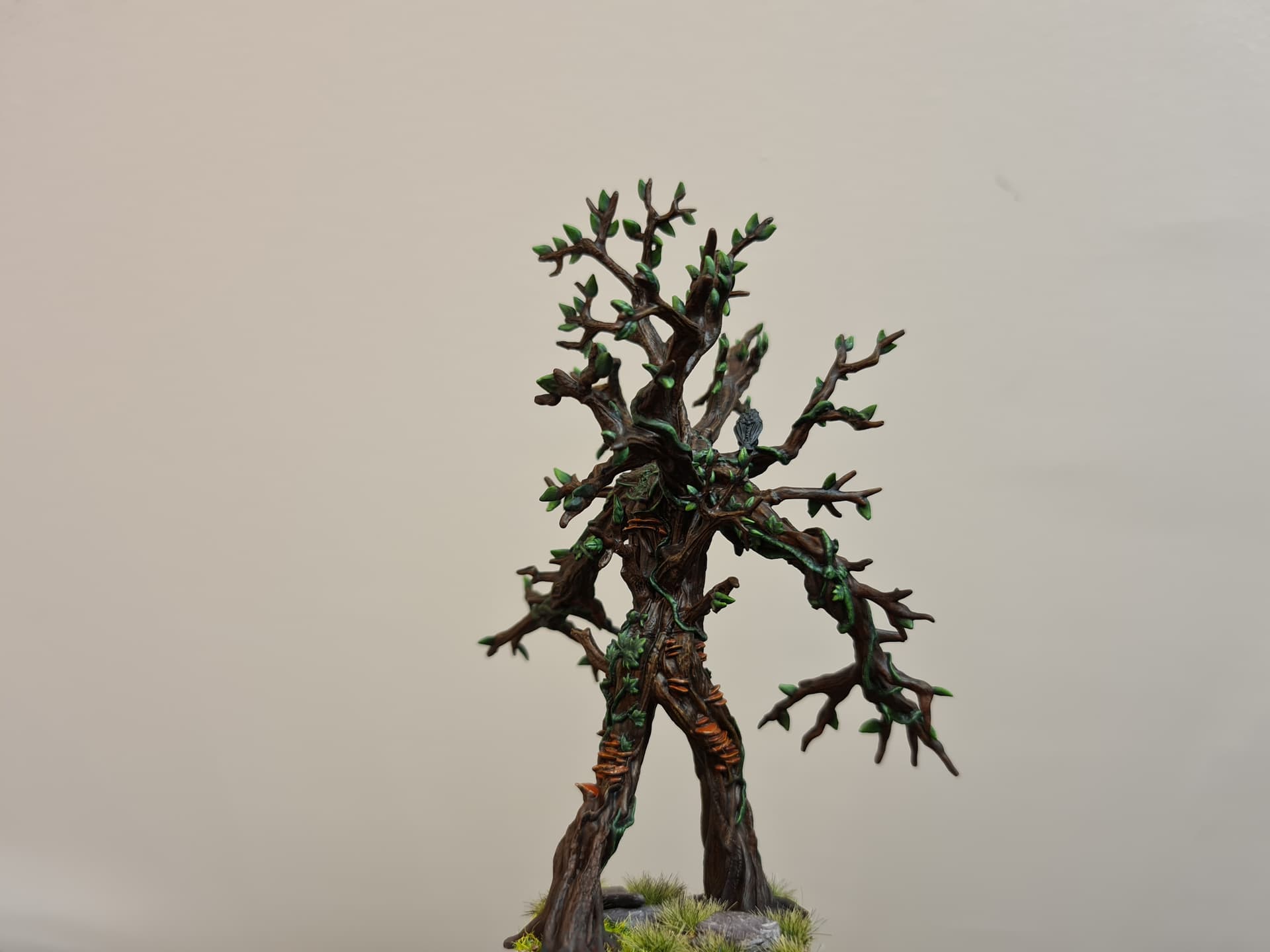 Painting definitely going even slower with the little one around, but still getting stuff done

As previously mentioned @Mikes it looks great… but you mentioned 'based, which i can barely see.

Granted, you don’t want too elaborate, as it would take the eyes away from the model itself.

Thanks again @Nav , and yep, just some flock, rubble, stones and bushes. Works for me and fits in with the rest of the army

The Mantic Treeherder is so large that it’s hard to get a good angle on the whole miniature where you can still see the face and other features and the base as well, so here is one from above: 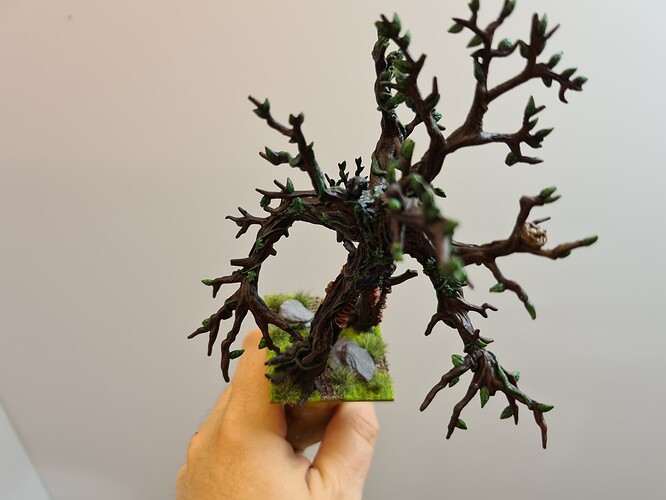 That base works well, with the grass tuffsbeing a lighter coulor green than the Tree Herder himself, it seperates the two so the base doesnt get absorbed, and yet, compliments the model.

I wasn’t happy with the job I had done on Ari’ana, the Wanderer Queen. White cloth is really hard to paint and just didn’t give the details of the dress any justice.

She got a wardrobe change today that I’m much happier with. 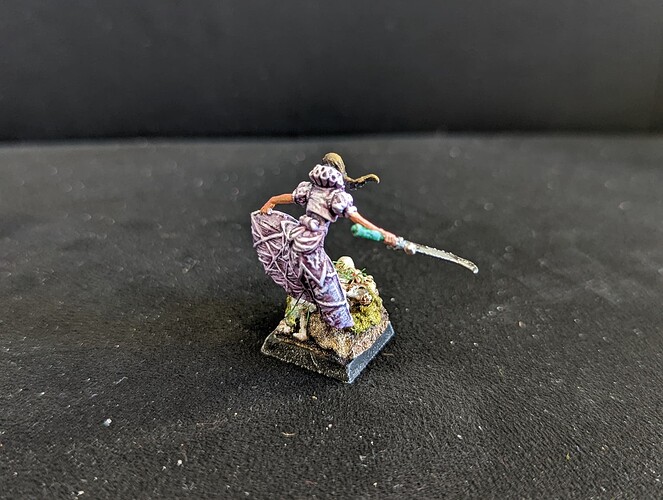 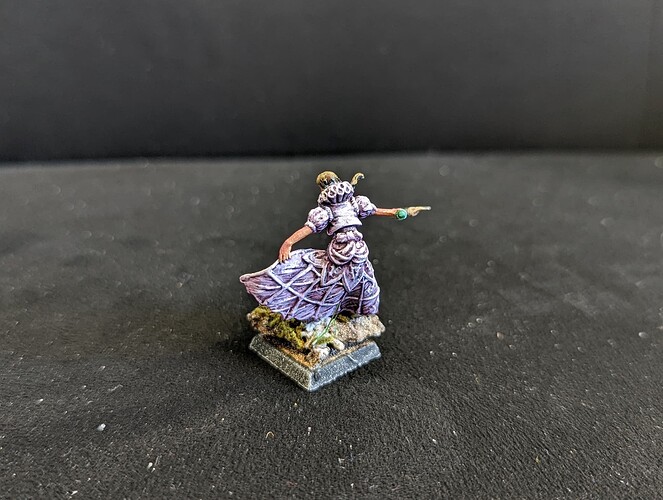 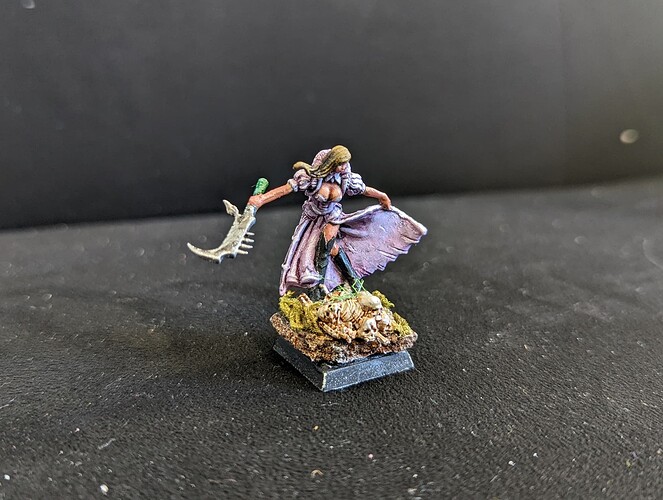 Thanks! Hopefully the new outfit brings her some better luck. Last game she Double 1’d a Frostfang Lord and got beaten into the ground for her troubles

Looks great @Findol, yeah, white can be a challenge, i had a similar problem painting my giant raven. a lot of work went into lightly dry brushing different metalic colours which caught at a certain angle, but otherwise, it was as black as… well a raven i guess

At least my Banshees had a blend of blue through to white to add shade and context, but similarly a challenge to get right. 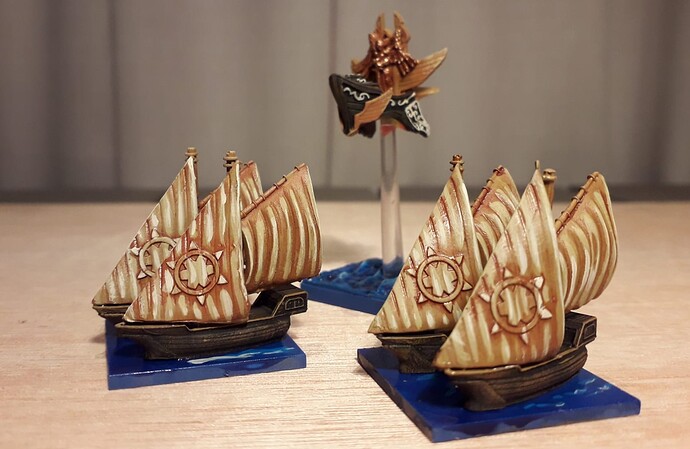 Two armada sloop squadrons and one sky altar.
Closeups of the sky altar can be found here:

Working on a model to use as an alternate Jarvis for a good Undead force and i’m quite happy with it so far, pics are a bit blurry because this camera is shoddy but you can make out the finer details like the eyebrows, lips and blue streaks in the hair. I just need to think of a good base for her. 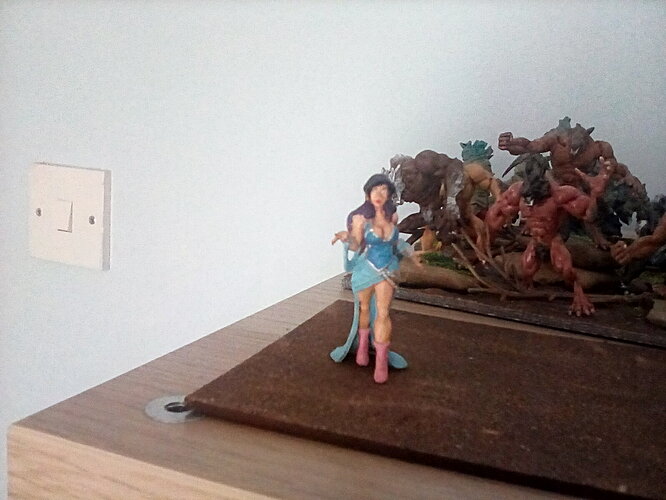 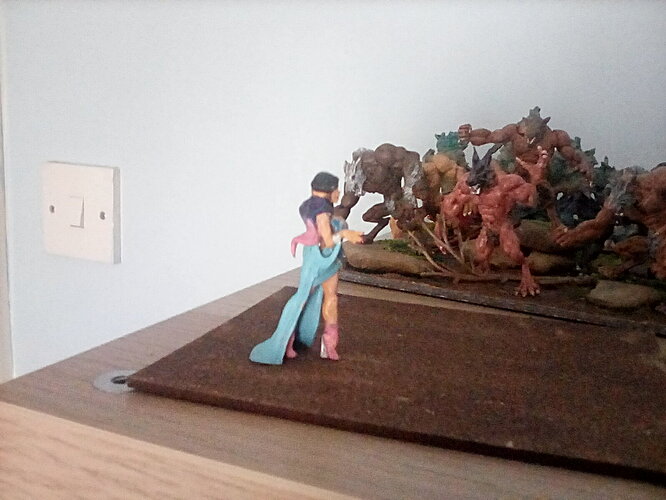 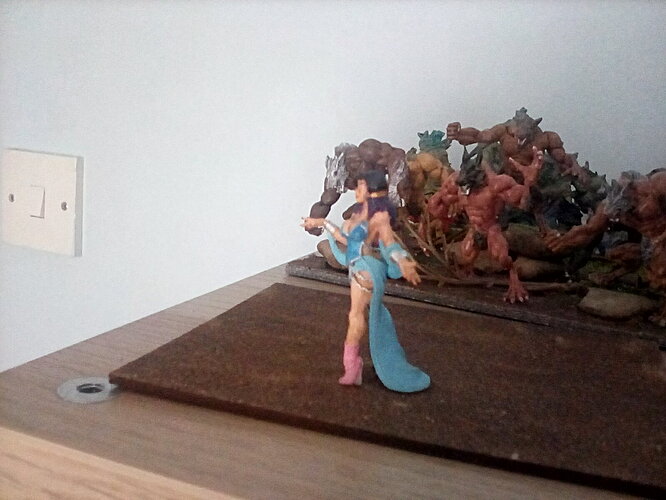 Very slowly but surely my regiment of Soul Reaver Cav is finally coming together. 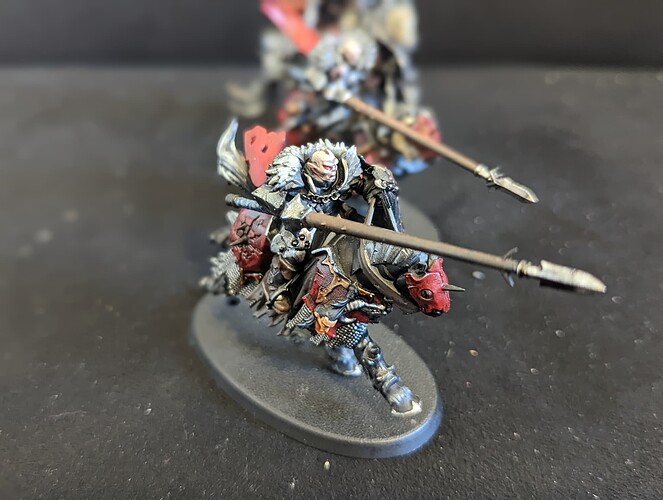 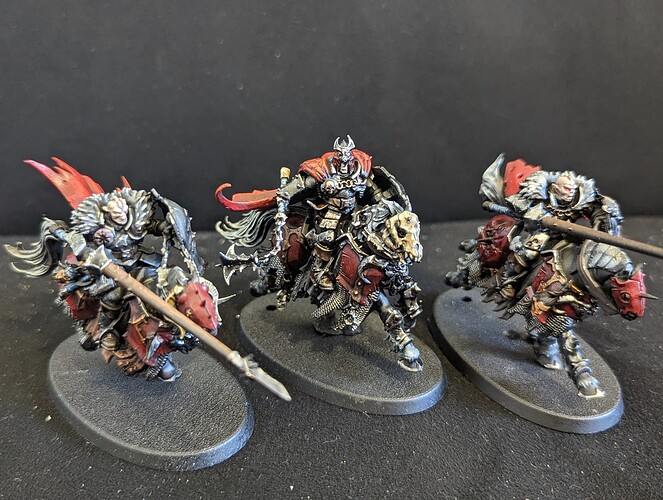 started laying down colours on the Wiltdaddy 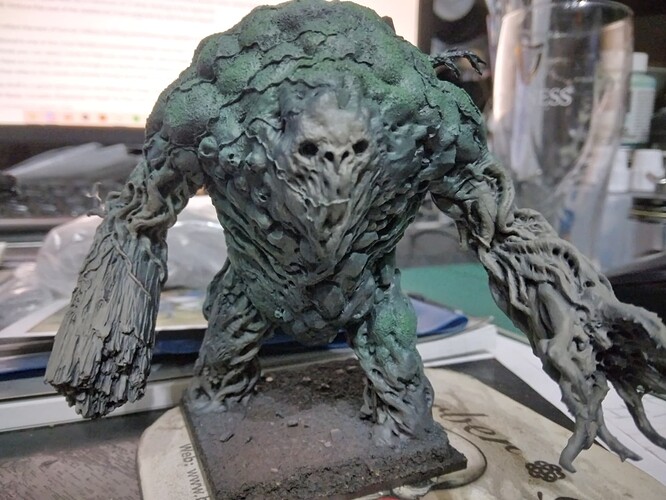 Using Morranach from Mierce and peat beasts as forest shamblers

Scary looking Wiltfather I love it.