Who are the Fools?

“They” say that the dwarfs of the Fool’s Hold are, well, fools.
On the surface it appeared to be a failed venture - dwarfs that set off to start a hold of their own, only to discover too late that their gold wasn’t really gold at all. Dwarfs should know better than to be fooled by fool’s gold; shameful even. At least these dwarfs are proud and stubborn, keeping themselves going in their remote hold by selling lumber, pork and ale - albeit mediocre by dwarf standards- almost as if their attention is devoted to something else.
They are fortunate that Golloch is so greedy for land that he brings them under the iron protection of his empire.

What “they” don’t know is that a warsmith, named Mimir, has been obsessing over the metal found in fool’s gold. Treating it as an ore, she found that fool’s gold is made of iron and something else. As useful as iron is, the other chemical was far more interesting… She showed it to Mendeleev, a flame priest, who excitedly recognised that the other component is sulphur.
Mendeleev told her that saltpeter and charcoal with sulphur are the components necessary to make black powder. If they could find a place to mine fool’s gold, near a forest then they could strike out and build an industry! They could make charcoal from trees and saltpeter from the waste of agriculture.

They would need plenty of rangers for the forestry, gold for expenses and muscle to claim a mountain. Rangers were easy enough, especially if you’re going to establish a rural hold. The gold would come from Norgrunn; a dwarf with a large brock, a fortune amassed from adventuring and a following of beserkers with more brocks. Norgrunn fancied being a lord of a hold, but agreed that the three of them and a representative from the rangers would run their small hold as a council. They found the place in Estacarr towards distant Dar-Esa, but not as far as Fentis-Ron. At the edge of the mountains, to be near the forest, between the Hare’s Rest and the Carric River.

The problem would be that once they began to gain momentum, others would want to take it from them - gunpowder is a valuable resource. They relied on their reputation as fools, on a failed venture relying on producing lumber and agriculture for survival, all the while selling lumber as an excuse to harvest wood; and pork and ale to make the waste needed for saltpeter production.

Were they prepared to do the things needed to keep such a big secret? Certainly not to dwarfs! They would need to defend themselves eventually.
Golloch has the best warsmiths and flame priests and would figure it out eventually. Golloch would come to take it from them. Unless they joined the Empire before then, they could exchange their explosive wares for the weapons and protection of Golloch’s Empire. Turning their greatest threat into their defender. 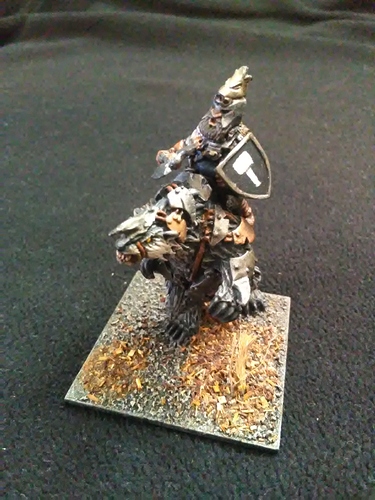 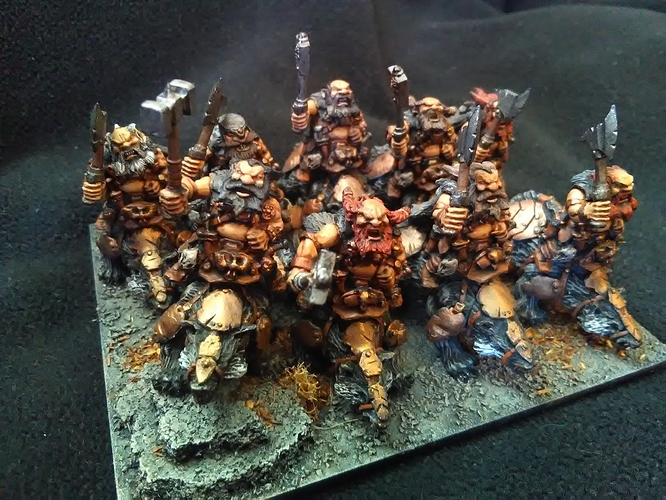 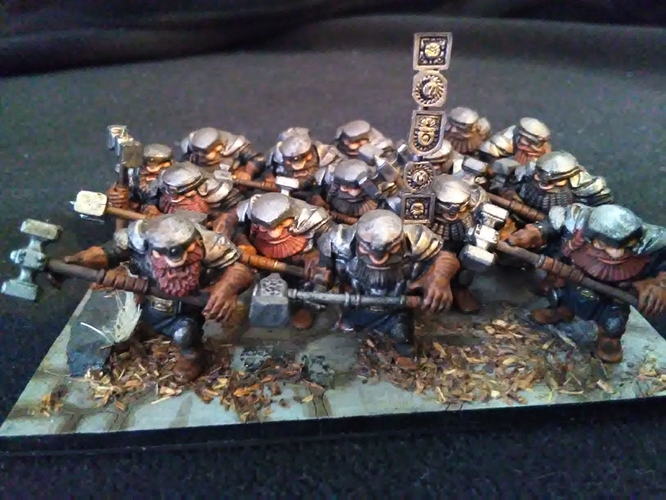 Great looking army and I love the background story.

Here follows an account of the early battles that shaped the Fool’s Hold as it is known today:
With narrative quotes from the battle reports here.

The first task was to establish camps to harvest lumber, but the knight of the forest fought back.

The Fool’s Hold had come out to claim at least a part of the forest, to set up a camp for logging operations. They met a stubborn and devoted resistance, of the kind one would expect from dwarfs defending their hold. The dwarfs could not help but respect that and retreat under vengeful pursuit.
This forest will have to be respected like they expect their mountain to be respected.

On a practical note, they still need the lumber though. At least charcoal has to be made.
There would have to be guarded expeditions from the hold to harvest the fringes of the woods, outside of what the Order of the Green Lady consider their domain, if possible. Much less productive and efficient. At least while the plantations grew, which they now absolutely have to plant and cultivate.

After that battle a Basilean who thought to much of himself demanded tribute! He brought ogre mercenaries to raid the trade expeditions (parties with samples of trade goods), but the dwarfs reclaimed the samples of gunpowder bound for Golloch’s Empire and kept their secret, for now.

A bedraggled ranger burst into the hall with grim news. An army of ogres, prepared to fight dwarfs, was approaching the trade caravan. It seems that the had been hired by That Paladin . The one who arrived a few weeks before with only one regiment of men and demanded tribute for Basilea. Obviously funding his own adventures under the assumption that all dwarfs have piles of gold. He was told that subjects of High-King Golloch don’t fear Basilea and wouldn’t, even if if he wasn’t on the wrong side of Abercarr.

The caravan was mostly samples of ale and salted pork to establish trade, so could be abandoned. Two of the wagons were more important, they held samples of the secretly made black powder, bound for testing by Golloch’s warsmiths. That powder had to be reclaimed, or word would get out that there is a black powder supply and more enemies would come.

For that same reason the ogres are a grave threat. The Fool’s Hold cannot stand against siege breakers yet, that army cannot be left to be hired or plunder nearby. The ogres have to be fought and enough damage done to them that they must retreat to recover and will consider these lands threatening.

After that, the Fools held off a Salamander raid.

Rangers came back from patrol and reported an army or Salamanders marching nearby. Norgrunn knew that they would be looking for supplies, plunder and morale; which will put the logging expeditions at risk. “We have to get ready for a fight” he grumbled, “just in case”.

The armies eyes each other near a small logging camp, really jut a clump of trees with some supplies and tools. The council approached the salamander leaders to talk trade. With the Fool’s Hold on the eastern edge of Golloch’s Empire, meeting the Salamanders to set up trade was an important step in securing the hold’s prosperity.

“Our rangers report that you are in need of supplies” said Mimir, “we will assist you for the promise of trade”. One of the two salamander clan lords hissed “Why pay if we can take? We will show you the fire of Kthorlaq”. Before Mimir could correct him, she meant that they would give supplies now for a trade agreement later. Mendeleev, the flame priest, burst out: “FIRE?! You think you can show ME fire!? I know the chemistry of flame! I will show you FIREPOWER!”.

Sadly, this victory was followed by a failure to drive away the Twilight Kin threat and put a stop to the danger of their dark magic.

Norgrunn held his head in his hands. This was bad. The worst report he could think of. Strange elves doing horrific things and taking slaves. Elves don’t scare him, but he had heard about Twilight Kin and what they bring to the battlefield. That was the horror. He thought that the stories were just stories until he dealt with THEM himself. Night-stalkers.
If they took root in the fears and minds of even one village nearby then they would be near and lurking forever. Things that crawl out of the shadow. Things that walls cannot protect you from.

These elves must be eliminated or driven away before their corrupt magic can take root and invite THEM. While we’re at to we must move runic wards to the nearby villages; to protect the the villages and to draw the Twilight Kin out.

The villages are protected, for now, but the Twilight Kin and Night-stalkers remain a threat. The Fool’s Hold must prepare for horrors and fortify their minds.

Darker days were to follow, an army of undead rose in the area. The Fool’s Hold went out to meet them and put a stop to the treat, but suffered a heavy defeat.

Norgrunn was swallowed by a horde of undead and the rest of the Fool’s Hold can only hope that the rangers come back with Golloch’s aid before the Hold falls.

After this Golloch did send a force to save the Fool’s Hold. Luckily the powerful necromancer left a small force and moved on.

Golloch used the opportunity to gain some control over the Fool’s Hold. A portion of the rescuing force became an imperial garrison. They did establish logging camps, but use as supplies the pork and ale that would have been for trade; which made Fool’s Hold more dependent on Golloch’s Empire and now appear only an exporter of lumber .

Norgrunn was replaced by an Imperial Commander (also with a large beast), who sits on the council and commands the garrison. The rangers still fight though and beserkers have started coming to the Fool’s Hold; both to honour Norgrunn and because we have found a reputation as a frontier hold with many opportunities for glory in battle.